Jordaens spent his entire life in Antwerp. His ancestors, a family of tailors and textile merchants from Brecht in the North Kempen region, can be traced as far back as 1359, as has been recently shown by Mr Jean Bastiaensen on the basis of new archival research. Yet throughout his long life (1593-1678) – Jordaens lived until he was 85 years old – he bore the first name ‘Jacques’. The priest recorded ‘Jac’ (phonetically) in the baptismal registry. The artist also signed his paintings in this way, and the letters in his own hand, including those written in Dutch, are systematically signed ‘Jacques Jordaens’.

Art historians systematically transformed his name into ‘Jacob’ because it seemed a better fit for the author of scenes such as The King Drinks and As the Old Sing, So Pipe the Young, which were regarded as typically Flemish. This does not, however, correspond in any respect with the archives, and unfortunately it has also ensured that aspects of his art that were not thought to fit the typical ‘national character’ – such as the mythological scenes that form nearly a third of his oeuvre – were neglected for over a century in the Jordaens literature.

The three curators of the Jordaens exhibition, Dr Joost Vander Auwera, Dr Irene Schaudies and Dr Justus Lange, none of whom are native French-speakers, believe it is their scientific duty to correct this one-sided and historically incorrect view of Jordaens, and to honour the multi-facetted qualities of this great master in a historically correct way in the exhibition. The introduction to the catalogue contains a more in-depth explanation of their choice, along with a photograph of a letter written by Jordaens in Dutch – signed ‘Jacques’. 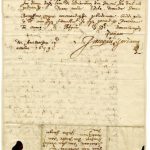