Art and Science in the Pre-Modern Netherlands

Volume 61 (2011) of the Netherlands Yearbook for History of Art is devoted to the relation between art and science in the pre-modern Netherlands. In Western culture since the sixteenth century, the relation between art and science, and indeed the meaning and content of these terms or disciplines themselves, have been the subject of continuing reflection and representation, in word and image, both implicitly and explicitly. In the proposed volume art stands for more than visual creativity and science for more than the investigation of nature. In the pre-modern period each was characterized by the other, in various ways and to varying extents, through shared curiosity, knowledge and study of the world. Art and science encountered and enlightened each other on an epistemological level, in practice and in the physical spaces of study, as well as in the resulting concrete products – in paintings, prints, poems, books, treatises, tracts and anatomical models. That both discourses made use of the same media, namely words and images, shapes an explanation for the ways in which concepts, ideas and metaphors from one played a role in that of the other. In the past two decades there has been a growing awareness that art and science share common ground, illustrated by studies like Svetlana Alpers’ much debated The art of describing, which found its counterpart in Brian Ogilvie’s The science of describing: Natural history in Renaissance Europe, and by the work of Wolfgang Harms and William Ashworth jr, who both stress the inextricable relation between natural history and emblematics in the early modern period.

The editors welcome submissions that address the relation between art and science as concretely as possible, based on historical textual and pictorial material, in all conceivable spheres. Inter- or trans-disciplinary contributions are welcome. Several examples might illustrate some of the issues at stake:

– Scientists relied on craftsmen for the design and manufacture of instruments, and artists for their illustrations. Some scientists themselves commanded considerable artistic talent, which led them to illustrate their own and others’ work.

– The importance of illustration increased, as did demands that these be true to reality (‘naer ’t leven’). They constituted a substantial part of scientific argumentation.

– Scientists regarded themselves as artists (or conducted themselves as such) in so far as the objects of their study – above all nature and the human body – merged with art or were treated in ‘artistic’ ways.

– Art came together with science at the point of visual observation, of the use of arguably the most important sense, the eye. From the seventeenth century on, people were certainly fascinated with the working of the eye (and of lenses).

– How the eye perceived perspective and color and helped to fix impressions in the memory held the interest of both scientists and artists. Visual perception developed into an absolute, undisputed route to insight.

– In the physico-theological tradition, emphasis was placed on the beauty of creation as being God’s work; the exact and precise representation of nature in word and image was closely allied with aesthetic as well as religious attitudes.

– Some scientists demonstrate aesthetic and religious feelings in literary ways, whether in the style and vocabulary of their scientific prose, or in separate literary works (above all poetry).

– In the eighteenth century physiognomical insights received a great deal of attention, so did – in the early nineteenth century – theoretical writings on the sublime in art and literature.

– Science and scientific practice became the subject of artistic reflection. Individual and group portraits of scholars – among other things author portraits – provide evidence of this, as well as literary and poetic inscriptions and dedications, and introductory and laudatory poems in the opening pages of scientific books.

– There were places and spaces where objects of art and science were brought together and either one, or both together, were studied: wonderkamers, cabinets of art and curiosity, museums, lecture halls, anatomical theaters, gardens, herbariums, and arboretums.

The NKJ is dedicated to a particular theme each year and publishes essays that reflect the diversity of approaches to the study of Netherlandish art. Contributions to the NKJ (in Dutch, English, German, or French) are limited to a maximum length of 7,500 words, excluding the notes.

The deadline for submission of proposals is June 1, 2009. Selection of proposals will take place at the beginning of July 2009. The deadline for submission of the articles for consideration and editorial comment is December 1, 2009. A workshop is planned at the Huygens Institute, The Hague, early 2010, with the authors of the provisionally accepted papers. Final decisions on the acceptance of any paper will be made by the editorial board following receipt of the complete text.

Proposals for papers, in the form of a 200-word abstract, should be sent to: 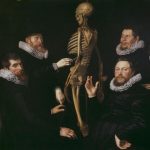