The cover of a 16th-century book in the Special COllections of the University of Amsterdam appears to have been made of two sheets from a 9th-century manuscript that has been used at the court of Charles the Bold, the grandson of Charlemagne. The remarkable discovery was made by two international experts in the course of a summer school on book history, organized by the University of Amsterdam. Nicholas Pickwoad, an expert on book covers, saw the book during a workshop. He suspected that the recycled parchment used for the cover was made from a very old manuscript. Rosamond McKitterick, specialized in Carolingian manuscripts affirmed this. She stated that the manuscript was made around 860, possibly in Compiègne.

The sheets once were part of a liturgical manuscript from the personal property of Charles the Bold. He was (like his grandfather) a patron for this type of manuscripts. Characteristics of these manuscripts are the gilded capitals on a purple background, decorated with acanthus leaves. They are very rare.

After the Reformation many "popish" manuscripts were cut up and reused. The now rediscovered sheets were used, of all books, for a work by Calvin. Moreover the book – that was published in Geneva in 1565 – has been in the possession of Germain Colladon, the judge that sentenced Calvin’s adversary Michel Servet to the stake. 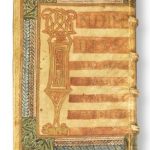 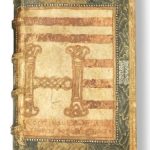