A new book on the life and work of Dutch seventeenth-century painter, Gabriel Metsu (1629-1667), by CODART member Adriaan Waiboer, will be launched in the National Gallery of Ireland in Dublin today (Thursday 11 October) by H.E. Paul Schellekens, Ambassador to the Kingdom of the Netherlands in Ireland.

From the National Gallery of Ireland press release, 11 October 2012

Despite his untimely death in 1667 at the age of 37, Metsu left a substantial collection of history paintings, portraits, still lifes, and a number of exquisite genre scenes which have earned the artist a place among the most celebrated painters of seventeenth-century Holland.

Metsu’s personal life, however, has remained enigmatic. Adriaan Waiboer’s book, published by Yale University Press (New Haven and London), describes in absorbing detail the artist’s life and that of his family. Waiboer says: “This study has aimed to correct the somewhat ill-defined position that Metsu has occupied in art-historical literature for a long time.” He reviews Metsu’s entire known oeuvre and places the artist within the context of Dutch genre painting of the period.

The Gallery’s successful exhibition on Gabriel Metsu (2010-2011), curated by Waiboer, showcased some 40 of the artist’s most celebrated works from public and private collections, including the Gallery’s pendant pair, Woman Reading a Letter and Man Writing a Letter. The exhibition attracted over 300,000 visitors at its showing in the NGI, Dublin, Rijksmuseum, Amsterdam and NGA, Washington.

Waiboer’s catalogue raisonné of Metsu’s works and various appendices will be the standard reference on the life and work of this important Dutch seventeenth-century artist.

A note on the author, Dr. Adriaan Waiboer

Adriaan Waiboer is Curator of Northern European Art at the National Gallery of Ireland (NGI). Adriaan graduated from the Rijksuniversiteit Leiden in 1997 and completed a M.A. degree at the Courtauld Institute of Art, London. At the Institute of Fine Arts, New York University, he received his second M.A. degree in 1998, and a Ph.D. in 2004, having defended his dissertation Gabriel Metsu (1629-1667): Life and Work. During his research, he received various fellowships, among them the residential Mary Davis Fellowship from the Center for Advanced Study in the Visual Arts, National Gallery of Art, Washington. Adriaan joined the NGI in 2004 as Curator of Northern European Art. He has organised a number of exhibitions for the NGI, among them Northern Nocturnes: Nightscapes in the Age of Rembrandt (2005), Vermeer, Fabritius & De Hooch: Three Masterpieces from Delft (2009), and Gabriel Metsu: Rediscovered Master of the Dutch Golden Age (2010).

Born in 1629 to a painter and midwife, Metsu grew up in Leiden where he was recorded as a painter at the age of 14. The name of his teacher is unknown, but he probably studied for some time under the Utrecht painter Nicolaus Knupfer. During his early years in Leiden, Metsu painted mainly large-scale biblical scenes. In the middle of the 1650s Metsu moved to Amsterdam. This shift prompted him to paint intimate scenes of daily life inspired by Gerrit Dou from Leiden and Gerard ter Borch from Deventer. As Metsu’s style became more meticulous in the 1660s, he focused increasingly on representing the pastimes of the upper class. In 1658, Metsu married Isabella de Wolff, daughter of Maria de Grebber from the well known artistic De Grebber family from Haarlem and one of Holland’s few female painters. Isabella was the model in many of Metsu’s genre and religious scenes. Metsu also painted himself more than ten times in various guises. He died at the age of 37 on 24 October in 1667. 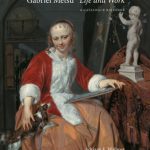