Paul Huvenne and Nico van Hout, both specialists on Rubens from the Koninklijk Museum voor Schone Kunsten (KMSKA) in Antwerp and long time CODART members, identified a sketch in the collection of the Nasjonalmuseet in Oslo as a genuine Peter Paul Rubens.

In the first half of this year the Nasjonalmuseet in Oslo held the exhibition Rubens – van Dyck – Jordaens: Baroque painting from Antwerp, for which the KMSKA was lending a few works.  It was during this exhibition that the sketch, then still referred to as from an unknown Flemish master, came to the attention of Paul Huvenne, director of the KMSKA. Nico Van Hout, curator at the KMSKA, had the possibility to pay closer attention to the sketch during his recent visit to this museum in Oslo, where he was to discuss the small exhibition on Flemish primitives that will be organized in Oslo next year. Van Hout soon saw that the quality of the sketch was very high and that the mastery could only be that of Rubens.

The sketch shows how Castor and Pollux kidnap the daughter of Leukippos, a story from Greek mythology. Rubens has made the sketch like a snapshot from the story,  action and time seems frozen in this small work. Van Hout thinks, when he compares the sketch with other sketches from Rubens, that this work could be dated in the years before 1615. One may wonder if this sketch could possibly be the first model, but not executed, for a famous composition by Rubens in the Alte Pinakothek in Munich, a painting dated around 1618.

Off course the Najonalmuseet is very excited by this discovery. This means that they own the only genuine Rubens in Norway!

This is a summary of a blog by Nico Van Hout. You could read Van Hout’s full blog (in Dutch) on the KMSKA’s website. 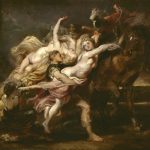