The Groeningemuseum in Bruges is currently preparing the exhibition “Pieter Pourbus and the Claeissens family: Painting in Bruges in the second half of the sixteenth century.” (working title – planned for autumn 2017). In preparation of this exhibition the oeuvres of Pieter Pourbus and those of the members of the Claeissens family will be investigated so as to gain a better insight into their working methods and the market for these paintings.

During the past decade, new facts about the Claeissens artist family came to light. The long-known signature PETRI NICOLAI MORAULI was connected to Pieter I Claeissens (1499/1500-1576), the founder of the family. Because of this finding, five signed paintings could be attributed to this- up until then enigmatic – master. These five works are the core of his oeuvre and form the foundation for further research. The Mass of Saint Gregory is preserved in the Sarah Campbell Blaffer Foundation in Houston, Texas, and the panels with Saint Sebastian and Saint Jerome are part of the altarpiece in the Santa Maria del Puerto Church in Santoña, Spain. However, the two other panels are not preserved in public collections and their current location is unknown. The Groeningemuseum is putting out this call in the hope of locating these paintings.

The Visitation (see image) was last recorded in 1951 in the collection of Count Bobrinsky in London. This work is signed OPUS PETRI NICOLAI and measures 122 by 94 cm. Max J. Friedländer attributed the painting, according to a note on the backside of a picture at the RKD, already to Pieter I Claeissens.

The painting Saint John at Patmos (see image) was auctioned from the collection of Baron de Brouwer at R. Keyaerts auctioneers on 6 October, 1947 in Brussels (lot 46). This work of art carries the signature o […] NICOLAI MORAVLI BRVGIS IN FLANDRIA IN PLATFA Q DICIT R DE OVDE[.]ACK and measures 68 by 95 cm. This painting was last seen by an art dealer in 2007, but its current whereabouts are unknown.

These two paintings are of major importance for further research on Pieter I Claeissens and the Groeningemuseum would like to investigate them. If you have information about these two paintings, other signed works of the Claeissens family or you wish to obtain more information about the exhibition, please contact Anne van Oosterwijk, assistant curator at the Groeningemuseum, Bruges (0032 (0)50 44 8704, anne.vanoosterwijk @brugge.be). Confidentiality is guaranteed. 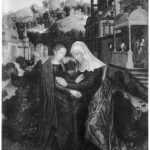 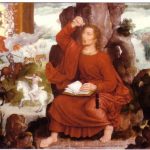