A book of essays on collecting Dutch art in America has been published recently. It explores how so much Dutch art has made its way to the United States.

Americans have long had a taste for the art and culture of Holland’s Golden Age. As a result, the United States can boast extraordinary holdings of Dutch paintings. Celebrated masters such as Rembrandt van Rijn, Johannes Vermeer, and Frans Hals are exceptionally well represented, but many fine paintings by their contemporaries can be found as well. In this groundbreaking volume, fourteen noted American and Dutch scholars examine the allure of seventeenth-century Dutch painting to Americans over the past centuries. The authors of Holland’s Golden Age in America explain in lively detail why and how American collectors as well as museums turned to the Dutch masters to enrich their collections. They examine the role played by Dutch settlers in colonial America and their descendants, the evolution of American appreciation of the Dutch school, the circumstances that led to the Dutch school swiftly becoming one of the most coveted national schools of painting, and, finally, the market for Dutch pictures today. Richly illustrated, this volume is an invaluable contribution to the scholarship on the collecting history of Dutch art in America, and it is certain to inspire further research. 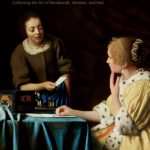