Last week, Tuesday 12 January CODART member and curator of the Centraal Museum in Utrecht Dr. Liesbeth M. Helmus successfully defended her dissertation in the Agnietenkapel of the University of Amsterdam. Her dissertation, Painting on commission: contracts for altarpieces in the northern Netherlands 1485-1570 deals with the relationship between patrons and painters. CODART congratulates Liesbeth with this great accomplishment.

Information on the dissertation

Painting on commission: contracts for altarpieces in the northern Netherlands 1485-1570

Although the relationship between patrons and painters has attracted the interest of many art historians over recent decades, Painting on Commission is the first study of surviving contracts in the Northern regions. In the fifteenth and sixteenth centuries, altarpieces were among the most prestigious commissions. Because of the large sums of money these assignments involved, it was of great importance that proper agreements were made, and that these were consolidated in written documents. The written contract is thus the most important source underlying the genesis of the painted altarpiece. The study addresses whether altarpieces can justifiably be seen as a distinct functional category, and how many altarpieces are likely to have been created. It examines what an artist’s contract consisted of, and in which ways it was comparable with other contracts. The contracts for the painted altarpieces in the northern Netherlands are examined in depth. As the return of Jan van Scorel from Italy in 1524 is generally regarded as a turning point in painting ‘north of the rivers’, Scorel and his pupil Maerten van Heemskerck are central to this study. It will be demonstrated that there is a significant change in the relationship of both artists with their patrons – a relationship that was characteristic of the new artistic era brought by the Renaissance. 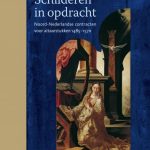