Today it was officially announced that a portrait, which has been in the collection of the Cobbe family for centuries, is a lifetime portrait of William Shakespeare. Three years of research by Mark Broch, curator of the Cobbe Collection and member of CODART has demonstrated the Cobbe picture is the prime version of the portrait.
According to Broch, most artists in England around 1600 were of Dutch descent, therefore it would not be surprising if the anonymous maker was of that nationality. In any case the portrait might well have served as the basis of the engraving by Martin Droeshout of 1623 (His father was born in Brussels).

The newly discovered picture has descended for centuries in the same family, the Cobbes. It hung in their Irish home, under another identification, until the 1980s, when it was inherited by Alec Cobbe who was a co-heir of the Cobbe estate and whose heirlooms were transferred into a trust. In 2006 Alec Cobbe visited the National Portrait Gallery exhibition ‘Searching for Shakespeare’ where he saw a painting that now hangs in the Folger Shakespeare Library, Washington. It had been accepted as a life portrait of Shakespeare until some 70 years ago, but fell from grace when it was found to have been altered. Mr Cobbe immediately realised that this was a copy of the painting in his family collection.

The painstaking work of researching the picture has been carried out over the last three years by Mark Broch, curator of the Cobbe Collection. The research conclusively demonstrates that the Cobbe picture is the prime version of the portrait and establishes beyond reasonable doubt its descent to the Cobbes through their cousin’s marriage to the great granddaughter of Shakespeare’s only literary patron, Henry Wriothesley, the 3rd Earl of Southampton. In addition to the Folger copy, several other early copies of the Cobbe portrait have been located and no less than three of them have independent traditions as portraits of Shakespeare. In two cases the traditions date back to within living memory of the poet—providing compelling evidence that the identification of the sitter as Shakespeare was correct all along. The conclusion that the sitter is Shakespeare is strengthened by the fact that the original picture, the Cobbe portrait, was inscribed with a quotation from the Classical writer, Horace, taken from an ode addressed to a playwright. The original and its copies are being considered together as a group for the very first time. Additional scientific investigation has been carried out to support the research including examination by x-ray at the Hamilton Kerr Institute, Cambridge, tree-ring dating by Professor Peter Klein, Department of Wood Science, Hamburg University and infra-red reflectography by Tager Stonor Richardson.

Up to now only two images have been accepted as authentic representations of what Shakespeare may have looked like. One is the engraving by Martin Droeshout published in the First Folio of 1623. The other is the portrait bust in Holy Trinity Church, Stratford-upon-Avon; the monument is mentioned in the Folio and therefore must have been in place by 1623. Both are posthumous – Shakespeare died in 1616. The engraver, who was only in his teens when Shakespeare died, must have had a picture, until now unidentified, to work from. Professor Wells believes it to be the one he has revealed today and that it was done from life, in about 1610, when he was 46 years old.

A third picture, the oil painting known as the Chandos Portrait which is in the National Portrait Gallery, has some supporters as an authentic image but, to quote Shakespeare’s most authoritative biographer, Park Honan, it ‘may date from the Jacobean era but its authenticity has been debated.’

Professor Wells said today: “The identification of this portrait marks a major development in the history of Shakespearian portraiture. Up to now, only two images have been widely accepted as genuine likenesses of Shakespeare. Both are dull. This new portrait is a very fine painting. The evidence that it represents Shakespeare and that is was done from life, though it is circumstantial, is in my view overwhelming, I feel in little doubt that this is a portrait of Shakespeare, done from life and commissioned by the Earl of Southampton and believe it could certainly be the basis for the engraving seen in the First Folio." 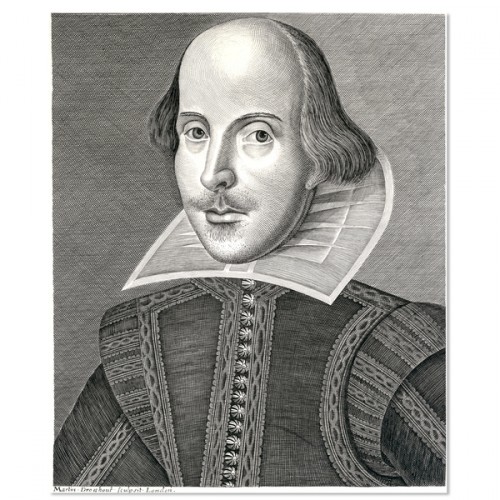