The Maurithuis announced today that it has reattributed the painting Saul and David to Rembrandt. This is the conclusion of eight years of research by a large team of international experts under the leadership of the Mauritshuis. The painting has been carefully restored and is the centerpiece of the exhibition Rembrandt? The Case of Saul and David, which is presented at the Mauritshuis from 11 June to 13 September 2015 and is the setting for the upcoming CODARTfocus on 30 and 31 August 2015.

Emilie Gordenker, director of the Mauritshuis and curator of the exhibition Rembrandt? The Case of Saul and David: "For eight years, a large team of international experts has contributed to the research. A wide range of trusted and innovative research techniques have been employed. The result is significant: the Mauritshuis has one of its most famous Rembrandts back. At the same time, we have created an exciting exhibition in which we share our findings using interactive methods and techniques. We hope that our visitors will not only come for the newly attributed painting, but also to follow the fascinating story of this painting along with us”. Gordenker elaborates on these innovative research techniques in her article for the latest CODART eZine.

The painting Saul and David first emerged in 1830 at an auction in Paris. It then remained on the market for years until its purchase by Mauritshuis director Abraham Bredius in 1898. There was no doubt in his mind that this was one of Rembrandt’s most important paintings. After his death in 1946, he left the painting to the museum. Saul and David was considered one of the most beautiful works by Rembrandt, and was a favorite of the visitors of the Mauritshuis.

In the sixties and seventies, Rembrandt’s oeuvre was examined in a new light. Horst Gerson (a Rembrandt expert and authority in his time) wrote off many of Rembrandt’s paintings, including Saul and David. Opinions about the attribution have varied widely ever since.

The New York Times published an in-depth article about the recent attribution today, an online version of it is available on their website. 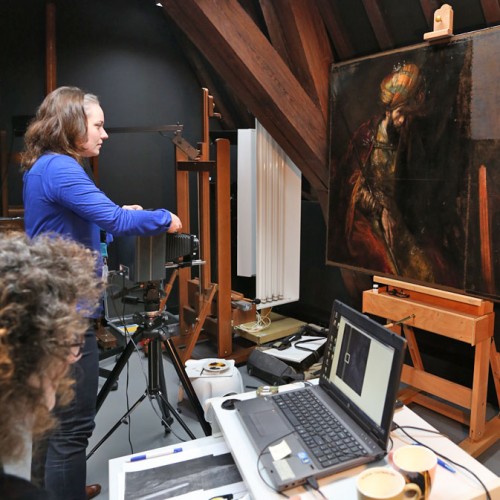