This long-awaited volume is a comprehensive study of the paintings of Hendrick Goltzius (1558-1617), the most important artist in the Netherlands at the turn of the seventeenth century. A poem published in Haarlem in 1617 lamented the death that year of the most artful master Hendrick Goltzius, in his life [a] skillful painter, draftsman, and artful engraver. The fact that "painter" heads the list of his accomplishments is significant, for although Goltzius enjoyed international fame as a draughtsman and engraver, to his contemporaries he was equally renowned for his skill in the art of painting, which was considered the highest artistic calling. This volume on his paintings, the first since Hirschmann’s short study of 1916, finally completes a full assessment of this artist of Haarlem, whose drawings were the subject of Reznicek’s publication of 1961 and whose prints were catalogued by Leesberg in the New Hollstein series that appeared in 2012.

Goltzius abandoned his engraver’s burin and turned to painting in the year 1600. Exploring the new medium, he worked on small coppers, as well as large canvases and panels. Goltzius’s determination to work in oil, after acquiring international fame as a printmaker, was a deliberate decision to embrace an even greater challenge and to seek greater recognition for his artistry. Although archival records show that Goltzius painted more portraits than has previously been assumed, it was the depiction of the human nude that was his primary goal. He mostly chose to paint biblical and mythological themes: the same subject matter, in fact, that he had treated in his engraved histories. The difference, however, was that Goltzius now began to paint figures that were nearly life-size. His manner of depicting figures may be considered an extension of what he had learned during his stay in Rome (1590-91) and subsequently pursued in his prints of the 1590s. Only rarely are traces of his Spranger-inspired, anti-classical past encountered in his paintings. Instead, Goltzius strove with his brush to portray human forms at once idealized and naturalistic. His points of departure were antique Roman sculpture, the sixteenth-century masters – Michelangelo, Raphael, Titian, Veronese, Dürer, and Van Heemskerck – and Rubens, his contemporary.

Four chapters are dedicated to a consideration of the reasons for Goltzius’s conversion to painting, his biography in the years 1600 to 1617, an examination of the style and iconography of his works in oil, and a thorough review of the critical appraisal of his paintings from his day to the present.

The extensive catalogue discusses 59 paintings by Goltzius, and also includes 160 pictures known only from descriptions and 38 rejected works. A lengthy appendix – the result of extensive archival research – includes, in the original language, all known sources that mention Goltzius and every known inventory listing of his paintings.

The catalogue of accepted works is ordered iconographically, whereas the color plates of Goltzius’s entire extant oeuvre are arranged in chronological order, visually demonstrating the development of his career as a painter. In addition to the color plates, 121 black-and-white figures provide material for comparison.

A complete bibliography and three indexes enhance the accessibility and usefulness of this volume. 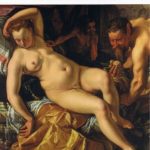