A worldwide study undertaken by the Bosch Research and Conservation Project (BRCP) has shown that The Temptation of St. Anthony from The Nelson-Atkins Museum of Art, Kansas City, Missouri, should be attributed to Hieronymus Bosch himself. The painting was acquired in the 1930s and kept in storage for decades because it was classified as the work of a pupil or follower of Bosch. The new attribution is a significant addition to the small body of existent work produced by Hieronymus Bosch (ca. 1450–’s-Hertogenbosch 1516).

Although the image was heavily retouched and overpainted during a twentieth-century restoration, Bosch’s hand is still clearly recognizable in the original brushwork. When looking beyond these later additions, it is clear to the research team how closely the St. Anthony scene is related to the left wing in particular of the Hermit Saints Triptych in the Gallerie dell’Accademia in Venice. The BRCP’s research team also used infrared photography and infrared reflectography to reveal underdrawings that perfectly match what has been found in other panels from Hieronymus Bosch’s core oeuvre.

The newly discovered work, which dates from around 1500–10, will be shown to the public for the first time at Hieronymus Bosch: Visions of Genius opening at Het Noordbrabants Museum on 13 February 2016 to celebrate the 500th anniversary of Bosch’s death. 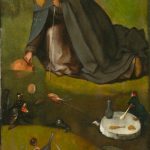