A new inventory of the Czernin Gallery of Paintings is to be released on 11 November 2015. The Viennese gallery included many works of Dutch seventeenth century artists, as well as Italian, Spanish and French masterpieces. The aristocratic collection is best known for Vermeer’s Painter in his Studio, now in the Kunsthistorisches Museum of Vienna.

Until now, the only available inventory was the one published by Karl Wilczek, dating back to 1936, when the collection was still intact. The upcoming publication will be the first in 80 years to cover the provenance of all of the circa 340 paintings.

Information from the publisher, 2 November 2015

The Czernin Gallery of Paintings was one of the most impor­tant collections of Old Master paintings in Vienna. In 1775 Johann Rudolf Count Czernin of Chudenitz (1757 – 1845) started collect­ing till approximately 1820. His son Eugen Karl (1796 – 1868) added prominent works of art.

The spectacular sale of Vermeer’s Painter in his studio (today: Kunsthistorisches Museum, Vienna) to Adolf Hitler in 1940 marked the starting point for the selling of the entire collection in the second half of the 20th century. Today famous Czernin paintings are part of European and US American museums, can be found on the interna­tional art market or belong to private collectors.

A new inventory of the former Czernin Gallery of Paintings com­piled by Roswitha Juffinger and Imma Walderdorff offers data on the acquisition of the paintings around 1800 and the sales in the 20th century. New attributions to artists in addition to black and white images of the majority of the art works complement the publication. These photographs come from the glass-negative stock of Josef Löwy, who shot the photos around 1900. 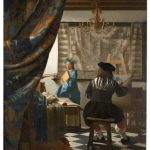