The latest issue of Oud Holland, no. 1, 2014, is entirely dedicated to an exceptional group of family portraits depicting the Craeyvangers of Arnhem and painted by Paulus Lesire, Gerard ter Borch and Caspar Netscher.

In 2009 a remarkable series of family portraits came up for auction in Amsterdam. They represent the cloth merchant Willem Craeyvanger, his wife Christine van der Wart and their eight children. The portraits were painted between 1651 and 1658 by Paulus Lesire, Gerard ter Borch and – as was only discovered after the sale – the latter’s pupil Caspar Netscher. For more than 350 years the portraits had remained in the possession of the family, virtually unknown to art historians. Since there are no comparable series with as many as ten individual portraits from a single family known in seventeenth-century Dutch painting, their appearance caused quite a stir. The three articles that make up this special issue examine the history, production and attribution of the ten portraits. In their joint article, Mauritshuis curator Ariane van Suchtelen and the historian Menno Potjer give a description of the portraits and present the results of historical research into the individual members of the Craeyvanger family. The authors furthermore discuss the attribution of each portrait. Mauritshuis conservator Petria Noble, in her article, offers a unique reconstruction of the source of the supports of the eight childrens’ portraits. Her research also reveals some special aspects of seventeenth-century Dutch painting practice. In the final contribution, the author of the 2002 monograph on Caspar Netscher, Betsy Wieseman, reconsiders Netscher’s early years as an artist.

Fortunately the Craeyvanger portraits have remained together since the sale of 2009. In recent years they have been exhibited in the Mauritshuis, The Hague; the Valkhof Museum, Nijmegen, and the Bonnefanten Museum, Maastricht. Until August 2014 they can still be seen at Museum De Fundatie in Zwolle.

Petria Noble
From One Piece of Canvas. The Supports of the Eight Craeyvanger Children’s Portraits 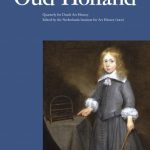