Last Friday, On Rubens’ birthday, a new publication on the birth of the artist was presented in the Rubenshuis in Antwerp.
From the seventeenth century onwards it has been assumed that Peter Paul Rubens has been born in 1577, on 28 June. It was a point of discussion where he was born. Some said Antwerp, others Cologne. It was not before the 19th century that a new place of birth was proposed: Siegen. Recently the year 1577 has been questioned. In The Birth of Rubens the sources have been collected and analysed, which has led to the conclusion that Rubens has indeed been born on 28 June 1577 in Siegen. The book also offers new insights in the circumstances of the return of Marie Pijpelinckx and her children to Antwerp. 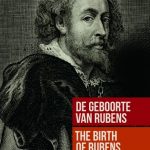