Currently in an early stage, the site is a ‘work-in-progress’ catalogue of all Rembrandt’s known drawings, arranged in the order of the last full catalogue by Otto Benesch, The Drawings of Rembrandt, 2nd edition, enlarged and edited by Eva Benesch, London and New York, 1973. It is being compiled by Martin Royalton-Kisch, whose catalogue of the drawings by Rembrandt and his school in the British Museum has already been online for several years on the museum’s online research pages.

The aim of the new site is to write new entries on all the drawings that Benesch catalogued as autograph, as well as on any other authentic drawings that he did not include. Martin believes that it is only by cataloguing all the drawings accepted in Benesch’s magnum opus that the study of drawings by Rembrandt and his workshop can move forward satisfactorily. Once the task is completed, perhaps in around 2025, Martin, who is in regular contact with other specialists in the field, hopes to publish a new complete catalogue in book form with Yale University Press.

New entries, with illustrations, for all the drawings in Benesch’s volume I (out of six) are now complete in draft form, covering around 210 drawings out of approximately 1,450 in his catalogue. Short entries are also included on some 79 drawings that were either unknown to Benesch or rejected by him. Some of the texts are still in an early draft and much academic literature still needs to be checked (assistance in this from CODART members and others is welcome via the website’s Contact tab). The opinions expressed on the site are generally up-to-date, though subject to further research that might change them. The texts have not yet been properly edited but in most cases they are more complete, though probably no less controversial, than in any other available source. 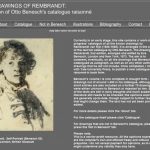