The Radboud University Nijmegen has launched, in partnership with the Rembrandt House Museum in Amsterdam, the Rembrandt Documents Project (RemDoc) in order to provide a much-needed infrastructure for making all original documents and primary source texts relating to Rembrandt accessible. The Huygens Institute for the History of the Netherlands in The Hague has been commissioned to create a suitable work environment in which all these documents can be searched and accessed in a way that is fitting for modern art history. The Rembrandt Documents Database is open to the general public but mainly targets academics, museum professionals and students.

The RemDoc project subscribes to a modern and inclusive definition of the term ‘document’. Therefore, RemDoc will, for example, include extracts from baptism, marriage, and burial records; the small number of Rembrandt’s own letters; notarial deeds such as contracts, probate inventories, debt and credit records; as well as inscriptions by Rembrandt or his customers on drawings and etchings. RemDoc will also contain advertisements of auctions in newspapers and references to Rembrandt in contemporary poetry.

The heart of the RemDoc infrastructure will be original documents from the period between 1475 to circa 1750, though no firm terminus ante quem is used at present. RemDoc will not feature all Rembrandt documents from a later date because, following 1750, their nature changes significantly. Texts become increasingly interpretative rather than factual, and attributions of paintings in auction catalogues rapidly become less reliable. The content of the RemDoc database (scanned images of archival documents and metadata describing these documents) is provided by a range of institutions around the world, mostly archives, the main contributors being the Amsterdam City Archives (Stadsarchief) and the Regional Archives of Leiden (RAL).

Why a Rembrandt Documents database?

Consulting contemporary sources is essential for the study of Rembrandt, not only for the attribution of works of art and provenance research, but also for a better understanding of the artist, his milieu, the reception of his art, and the wider scene in which his art came to flourish, across national borders and over time. This highly divergent material is preserved in various (local) archives, museums, research institutes, and private collections all around the world. Sometimes documentation is hard to find or difficult to access, still unavailable in digital form, or not yet arranged as a coherent and interconnected body of material. RemDoc meets the needs of the modern art historian by offering a sustainable, easily accessible repository of all known documents, with both existing documentation and new information. For the first time in all Rembrandt documents are presented in an integrated, digital environment. This service aims to facilitate research by creating a digital laboratory for art historians.

The primary goal of the RemDoc project is to support scholarly research on Rembrandt, his life, and his art. RemDoc will help to illuminate the circumstances under which his pictures were produced. It will map the network of the customers who originally ordered them, and the subsequent collectors who inherited the pictures or acquired them at auction. The RemDoc infrastructure has a dynamic content, so that newly discovered documents and new annotations can be easily added.

In addition, the interface is user-friendly, with many opportunities for researchers to make use of database information (for instance filtering metadata by facetted search). This will make the RemDoc infrastructure an advanced workbench that supports scholarly research. RemDoc is primarily intended as an infrastructure for researchers in academia and in museums, yet the project’s results will also be of interest to the general public. Although art historians are the primary target group, several additional other groups are targeted, such as historians with questions related to 16th-18th century life, literary scholars, linguists studying 17th century Dutch, genealogists and economists studying the art market in the Golden Age.

At this moment the RemDoc database is still in its development stage. The contents and functionalities of the website are continuously being improved and expanded. The current edition of the website is a beta version, which means that it is still subject to experimentation and adjustments. Its developing status may have an effect on performance and speed. Nonetheless we consider it constructive to launch the website at this moment, so that our primary target audience – art historians – can get used to its operation and monitor its development closely, while benefitting from the already available documentation. To guarantee that this website meets its expectations a variety of tests will be conducted to determine its operability. All feedback will be greatly appreciated.

The following functionalities and properties will be added in the future:

Announcements of these innovations are published through various channels. If you would like to be kept informed of ongoing developments and receive periodical news updates, send us your details to remdoc@let.ru.nl and we will add you to our newsletter list.

Although RemDoc will continue to develop primarily as a research repository, it will also be a platform for the publication of new Rembrandt material: whether new documents or new information on already known source texts. All documents will be transcribed and annotated, and will be translated to modern Dutch as well as English. The number of original documents identified for the RemDoc initiative today includes more than 1100 items. RemDoc’s main value, however, is not the size of the document collection, but rather the depth to which the documents will be annotated and the ease with which they will be accessible. RemDoc will also provide links to the art historical literature about Rembrandt published after 1750. Last but not least, the RemDoc infrastructure will provide a gateway to other databases and digital collections that contain images and physical data about Rembrandt’s works of art. RemDoc will be interoperable with existing and future digital research platforms for art historians. An unpublished collection of recently discovered documents, mainly consisting of advertisements of auctions in contemporary newspapers, are being digitized. 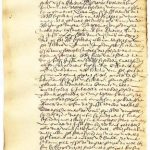