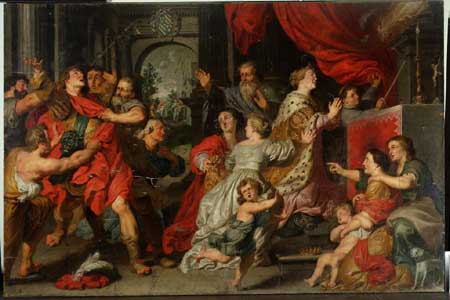 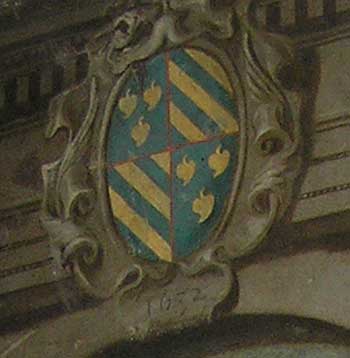 The exhibition “Flemish painting of the Golden Age”, which will be on show in the Muzeum Narodowe (National Museum) in Warsaw between November 6th and December 31st 2007 (see www.zlotywiek.mnw.art.pl), opens with a monumental canvas, the form of which epitomizes all characteristic features of baroque Flemish painting of the Rubens circle: dynamic composition, wealth of intense colors, realism in observation and rendering of details. The painting which is a visit card of the exhibition, being placed in the entrance hall over the monumental stair flights and figuring on the covers of all printed material connected with this show, is however a total puzzle: both its author and the subject matter remain unknown.

The enormous painting (252 x 385cm, canvas woven in herring-bone design, sewn together in the middle, along the horizontal axis) has always been in the Museum’s storage rooms, without possibility of restoration. It was published only once in: Catalogue of Paintings. Foreign Schools, National Museum in Warsaw, Warszawa 1969-1970, II, no. 1294 as Theodor van Thulden (?). The attribution was suggested by R.A.d’Hulst. The painting comes from a collection of the Krosnowski family, Poles who lived at the end of the 19th century in St. Petersburg. They were buying art objects both in Russia and in the West. The collection was donated by the family to the newly recuperated Polish state in 1920 and arrived in Warsaw in 1922. There have been many interesting Flemish paintings in this collection (see for example a painting by Abraham Janssens, published in Oud Holland 115, 2001/2002, nos. 3 – 4, p. 200-216). Both the inventory of the Krosnowski collection and the catalogue of 1969-1970 give the title of the painting as An Episode from the life of Marie de Medicis.

The composition shows a young man, who has just been seized by four men, who is rising his hands and his eyes to heaven and uttering the words: Cesse Madame, cesse car ie brvsle. “Madame” – a Queen (?) is praying ardently at an altar, at the right-hand side. She is surrounded by young women and children who are frightened by what is happening. In the background an arcade opens into a view where the same (?) royal lady is opening the door of a chapel (or a hospital) to let in the people who are carrying the body of a dead or sick man. In the cartouche over the arcade there is a coat of arms consisting of four fields, two with white, diagonal stripes and two with three heart-shaped leaves. At the bottom of the cartouche the date says 1633.

Suggestions that have been offered concerning the subject are:

The capture of Ravaillac, the assassin of Henri IV
St. Elizabeth of Hungary

None of these suggestions is satisfying and all have been contested by specialists; we are hoping that the CODART membership and other visitors to the website can help us further.

The publication accompanying the exhibition in Warsaw is only in Polish and impossible to reach many specialists abroad. Anyway, apart from big reproductions, the text concerning this painting relates only art historian’s torments and question marks. Therefore I am now placing the images of the whole of the composition as well as the coat of arms and this commentary on the forum of CODART. Maybe this way a better occasion can be created toward finding a solution of the “Warsaw puzzle”?