This special issue is dedicated to ‘the sublime and seventeenth-century Netherlandish art’.

Thijs Weststeijn
“The Sublime and the “Beholder’s Share”: Junius, Rubens, Rembrandt”
To what extent does Franciscus Junius’s theory of the “beholder’s share” in painting, based on Longinus and the Philostrati, connect with the practice of Netherlandish artists, including Rubens and Rembrandt?

Caroline van Eck
“The Petrifying Gaze of Medusa: Ambivalence, Ekplexis, and the Sublime”
This essay argues that to understand the sublime in early modern Dutch art, we have to include not only the Longinian sublime, but also Hermogenes’ discussion of the petrifying effects of the sublime, as exemplified in the head of Medusa, and pursues this issue in various Dutch representations of this Gorgon.

Jan Blanc
“Sensible Natures: Allart Van Everdingen and the Tradition of Sublime Landscape in Seventeenth-Century Dutch Painting”
This article seeks to understand if and under what conditions antique theories of the sublime could have been important in the artistic practice of the Dutch landscape painter Allart van Everdingen.

Joanna Sheers Seidenstein
“Grace, Genius, and the Longinian Sublime in Rembrandt’s Aristotle with a Bust of Homer”
This essay proposes that with his Aristotle with a Bust of Homer of 1653 (New York, Metropolitan Museum of Art), Rembrandt contributed to a contemporary debate about the place of theory in creative endeavor, presenting Aristotle—author of the earliest extant treatise on the mimetic arts—at a moment of recognition that for truly great, or sublime, achievement, his rules are ultimately insignificant in comparison to Homer’s natural genius. DOI: 10.5092/jhna.2016.8.2.5

Frans-Willem Korsten
“The Comedic Sublime: A Distinctly Dutch Baroque in the Work of Frans Hals”
The relation between the sublime and the comic has never been developed to the full theoretically, but the work of Hals embodies a distinctly Dutch Baroque that prefigures key philosophical issues concerning the nature of history and the actualization of worlds in terms of the “comedic sublime.”

Walter S. Melion
“Sublimia dona—sublimia mysteria: The Sublimity of Divine Speech in Jerónimo Nadal’s Adnotationes et meditationes in Evangelia”
Jerónimo Nadal’s foundational meditative treatise, the Adnotationes et meditationes in Evangelia of 1595, utilizes the term sublimis sparingly yet powerfully at five points to characterize the words and deeds of Christ, and to justify the Jesuit project of visualizing the sublimity of the verba Christi (words of Christ) and of Christ as Verbum Dei (Word of God).

Ralph Dekoninck, Annick Delfosse
“Sacer Horror: The Construction and Experience of the Sublime in the Jesuit Festivities of the Early Seventeenth-Century Southern Netherlands”
The festivities of canonization organized in 1622 by the Society of Jesus in the Southern Netherlands filled the everyday space of the city to turn it into a place of a special experience, which is here approached through the lens of the sublime and especially through the experience of sacer horror, that is, of the religious awe.

Hanneke Grootenboer
“Sublime Still Life: On Adriaen Coorte, Elias van den Broeck, and the Je ne sais quoi of Painting”
This paper explores the ways in which Adriaen Coorte (1665–1707) in his still lifes presents philosophical reflections on sublimity by searching for the limits of painting.

The next formal deadline for submission of articles is March 1, 2017 (for publication in 2017 or 2018), although authors are encouraged to submit at any time. 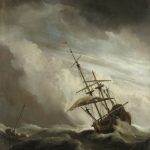 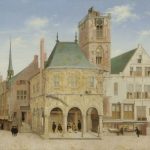