‘Het Pelsken’ (The Fur), Rubens’ most remarkable and intimate portrait of his second wife Helena Fourment, revealed a stunning secret recently. Analysis by researchers at the University of Leuven and the University of Antwerp using ma-XRF scanning, an imaging technique that uses fluorescence to distinguish between the various layers and chemical elements of the painting, demonstrated that there was originally a fountain in the background on the right of the painting. It was a two-level fountain and reached to Helena’s shoulders, with the base adorned with a lion’s head, water streaming from its mouth. Of particular note is the sculpture on the pedestal of the fountain, which is of a little boy urinating. These hidden elements gave the portrait an explicit erotic connotation and that is most probably the reason why they were overpainted in a later stage.

This impressive portrait has captured the imagination of many because Rubens’ wife is portrayed life-size, at full-length and single wrapped in a fur coat, while looking the beholder straigth in the eye. Art historians have puzzled over function and meaning of ‘The Fur’ for decades. The measurments were requested by prof. Katlijne Van der Stighelen (KU Leuven) and she has interpreted the discovery in collaboration with Gerlinde Gruber from the Kunsthistorisches Museum. The peeing boy is a motive that is known from Antiquity and often used by Renaissance painters such as Lorenzo Lotto and Michelangelo as a metaphor for lust and sexual unification. In this way, the discovery confirms the suspicion that this was originally a bedroom piece, intended only for the eyes of Rubens and his wife.

‘The Fur’ hangs in the Kunsthistorisches Museum in Vienna and is now on display in Antwerp for the exhibition Rubens in Private: the master portrays his family.

Written by Annemie Vanthienen for FARO. 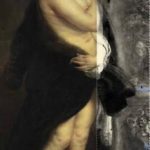 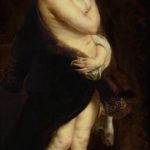