From the institution’s press release, 1 June 2012

Yesterday, Thursday, May 31, 2012 the Getty Research Institute (GRI) launched the Getty Research Portal, an unprecedented resource that will provide universal access to digitized texts in the field of art and architectural history.

The Getty Research Portal is a free online search gateway that aggregates descriptive metadata of digitized art history texts, with links to fully digitized copies that are free to download. Art historians, curators, students, or anyone who is culturally curious can unearth these valuable sources of research without traveling from place to place to browse the stacks of the world’s art libraries. There will be no restrictions to use the Getty Research Portal; all anyone needs is access to the internet.

The GRI worked with a number of institutions to create the Getty Research Portal—the Avery Architectural and Fine Arts Library at Columbia University, the Frick Art Reference Library, and the Thomas J. Watson Library of the Metropolitan Museum of Art in New York, as well as members of the New York Art Resources Consortium; the Biblioteca de la Universidad de Málaga in Málaga, Spain; the Institut national d’histoire de l’art in Paris; and the Universitätsbibliothek Heidelberg in Heidelberg. Together with the Getty Research Institute’s Library, these art libraries have already contributed nearly 20,000 digitized art history texts, which are immediately searchable via the Portal. Unlike other methods of searching for books online, every link in the Getty Research Portal leads directly to a complete digital surrogate that is free to download.

“The mission of the Getty Research Institute is to further the understanding and appreciation of art. Supporting research and access to scholarly resources is the most important part of this endeavor,” said Thomas W. Gaehtgens, Director of the Getty Research Institute. “The six founding art institutions have come together to share their unique collections of rare books and primary art historical sources and scholars will be able to enter this virtual library wherever they are without cost. The Getty Research Portal is likely to be the most used tool in art historical research at universities and museums alike.”

Because the Getty Research Portal only aggregates the metadata of the digitized texts and links to them, instead of keeping the texts on a server, there are no technical limitations to how much material can be collected. However, given current restrictions on the digital dissemination of copyright materials, all of the content on the Portal will be limited to works published before 1923 which are considered part of the public domain.

The founding contributors to the Getty Research Portal are based in the US, France, Germany, and Spain, and their contributions are largely in European languages. However, the Portal can also depict non-Western characters, and, as more institutions join and more texts are added, it will be possible to search in any language, making the Getty Research Portal a global resource for the history of art of all cultures.

The Getty Research Institute has a history of innovative work in new research technologies, including the successful creation of the Getty Vocabularies, a collection of online databases that are the premiere references for categorizing works of art, architecture, material culture, and the names of artists, architects, and geographic names.

“Given the evolution of web technology, the moment has arrived for research tools such as the Portal,” explained Murtha Baca, Head of Digital Art History at the GRI. “The GRI is committed to refining and maintaining the Getty Research Portal, and we are excited to see how this technology, combined with the vast art historical resources of the contributing libraries, enriches the research community.” 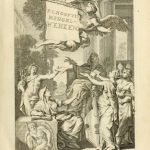