American museum-goers will have the rare opportunity to view a complete triptych by Renaissance master Maerten van Heemskerck (1498–1574), one of the most admired Netherlandish painters of the 16th century, when his dramatic Ecce Homo altarpiece (1544) is presented at the J. Paul Getty Museum in a focused exhibition from June 5, 2012 through January 13, 2013.

As a result of the Getty Museum’s Conservation Partnership Program and with the support of the Museum’s Paintings Conservation Council, the Ecce Homo triptych came to Los Angeles from the National Museum in Warsaw, Poland for conservation and study.

Drama and Devotion: Heemskerck’s ‘Ecce Homo’ Altarpiece from Warsaw will be presented at the Getty for six months and helps mark the occasion of the National Museum’s 150th anniversary. The Getty Conservation Institute (GCI) collaborated with the Getty Museum on this conservation project, conducting technical analysis of the painting.

“By bringing the Ecce Homo altarpiece to Los Angeles we have been able to conserve this important work, study it in depth, and now make it possible for our visitors to experience this striking object firsthand. Conservation and technical analysis can transform our understanding of the original appearance of a work of art like Ecce Homo as well as our knowledge of the artist’s technique,” explained Yvonne Szafran, senior conservator of paintings at the Getty Museum.

Maerten van Heemskerck worked in an innovative style that combined Netherlandish characteristics of verisimilitude with an expressive formal language and use of brilliant color that was influenced by the artist’s time in Italy, where he studied both ancient art and the work of his Italian contemporaries such as Michelangelo.

The Ecce Homo decorated the family chapel of wealthy sheriff Jan van Drenckwaerdt in the Augustinian church in Dordrecht, the Netherlands, between about 1544 and 1572. The altarpiece, which is more than 6 feet wide when fully opened, features five scenes: the central panel depicts the Ecce Homo (in which Pilate presents Christ to the crowd which calls for his crucifixion), a popular subject in Renaissance art; the left interior wing features the patron, Jan van Drenckwaerdt and St. John the Evangelist; Jan’s wife, Margaretha de Jonge van Baertwyck and St. Margaret of Antioch appear on the right interior wing; and St. John the Evangelist and St. Margaret of Antioch are painted in grisaille on the left and right exterior panels. The triptych retains its original 16th-century frame, which features an elaborate carved architectural surrounding for the central panel.

Many of Heemskerck’s religious paintings were destroyed by Protestant iconoclasts who attacked churches and destroyed objects associated with the Catholic faith across the Netherlands in 1566. The Ecce Homo triptych stands out as an important survivor of that tumultuous period.

In the exhibition, visitors will be able to walk around the altarpiece and study both its interior and exterior scenes. Didactic displays, featuring x-rays and infrared images of the painting, will illuminate Heemskerck’s working method and reveal the recent technical findings. Viewers will be able to appreciate his virtuoso brushwork, from the creation of robust musculature to the plush fur lining of Jan van Drenckwaerdt’ s coat and his wife’s fashionable sleeves, which epitomize the energy and quickness of his painting style. A digitally created reconstruction of the colors of the central panel will also suggest how Heemskerck’s vivid palette has changed over time.

“Through this painting, we have been able to better understand Heemskerck’s animated style and confident technique, which made him one of the most famous masters of his time,” said Anne Woollett, curator of paintings at the Getty Museum. “The Getty Museum’s international conservation collaborations create opportunities for unique visitor experiences such as this.” 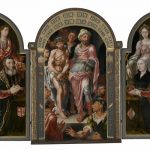 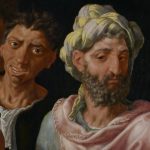