In 2006 our museum was able to repurchase a painting, that was lost in the war, depicting the catafalque of Archduke Albert (oil on canvas, 86,5 x 106 cm). There are two inscriptions on the painting. An inscription in the top left: EFFIGIES SERENISSIMI ARCHIDUCI ALBERTI. FUNDATORIS NOSTRI. OBIT 13. IVLLII. AN.o 1621. The second inscription is in the middle lower part of the painting: PROH dOLOR / ECCE ALBERT FLOS dUCUM OCCVbVIT / C. MALLERY OV AIV dE CA I F. The abbreviations in the last line of the inscription have as yet not been deciphered with certainty.

The authorship of the painting is problematic, because Karel van Mallery (1571-after 1635) is known as a draughtsman, engraver and art dealer in prints from Antwerp, but there is no painting by him known, not even a description of one in historical sources. After we had published an article on the painting in question (J. Tatrai, L. Lengyel, “Archduke Albert (+ 1621) on the Catafalque: A Picture of Old-New Acquisition”. Bulletin du Musée Hongrois des Beaux-Arts, 2008, Nr. 108-109, pp. 79-106) our former director, Klara Garas told us that the picture originally had a pendant depicting the catafalque of Infanta Isabella. There is no inscription on this painting. The two paintings – both held works by Karel van Mallery – were kept together until 1827, when they were in the collection of Nicolas Francois Joseph d’ Angoisse in Vienna. The paintings had the same measurements.

Do you know perchance about the painting depicting the catafalque of Infanta Isabella? If you have any information concerning the possible whereabouts please contact Julia Tatrai, curator at the Szépművészeti Múzeum: julia.tatrai@szepmuveszeti.hu 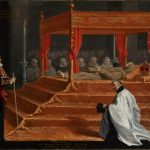