I was born in Düsseldorf on the Rhine, a hotspot of contemporary art in post-war Western Germany. So, when I developed an interest in painting, as many people do in their teenage years, the art of the twentieth century was virtually all I knew. In 1983, after finishing school and civilian service, I applied to the Kunstakademie, the renowned academy of fine arts in Düsseldorf, and embarked on a course there with the intention of becoming an artist. As time went on, however, I developed a growing interest in the history of modern art, and as the prospect of making my own art came to seem less and less meaningful to me, I started instead, four years later, on an art history course at Bochum University.

In 1988 I went to what was then West Berlin to finish my studies, and it was there that I finally discovered the Old Masters, through classes at the Freie Universität and by visiting the collections of the Staatliche Museen. Their works struck me as an exciting alternative to the predominant twentieth-century art, which seemed to me to have reached saturation point: it was omnipresent, endlessly regurgitated in exhibitions and the media. Ever since then, my interests have focused on the art and architecture of the past, in particular of the Middle Ages and Renaissance in Northern Europe. 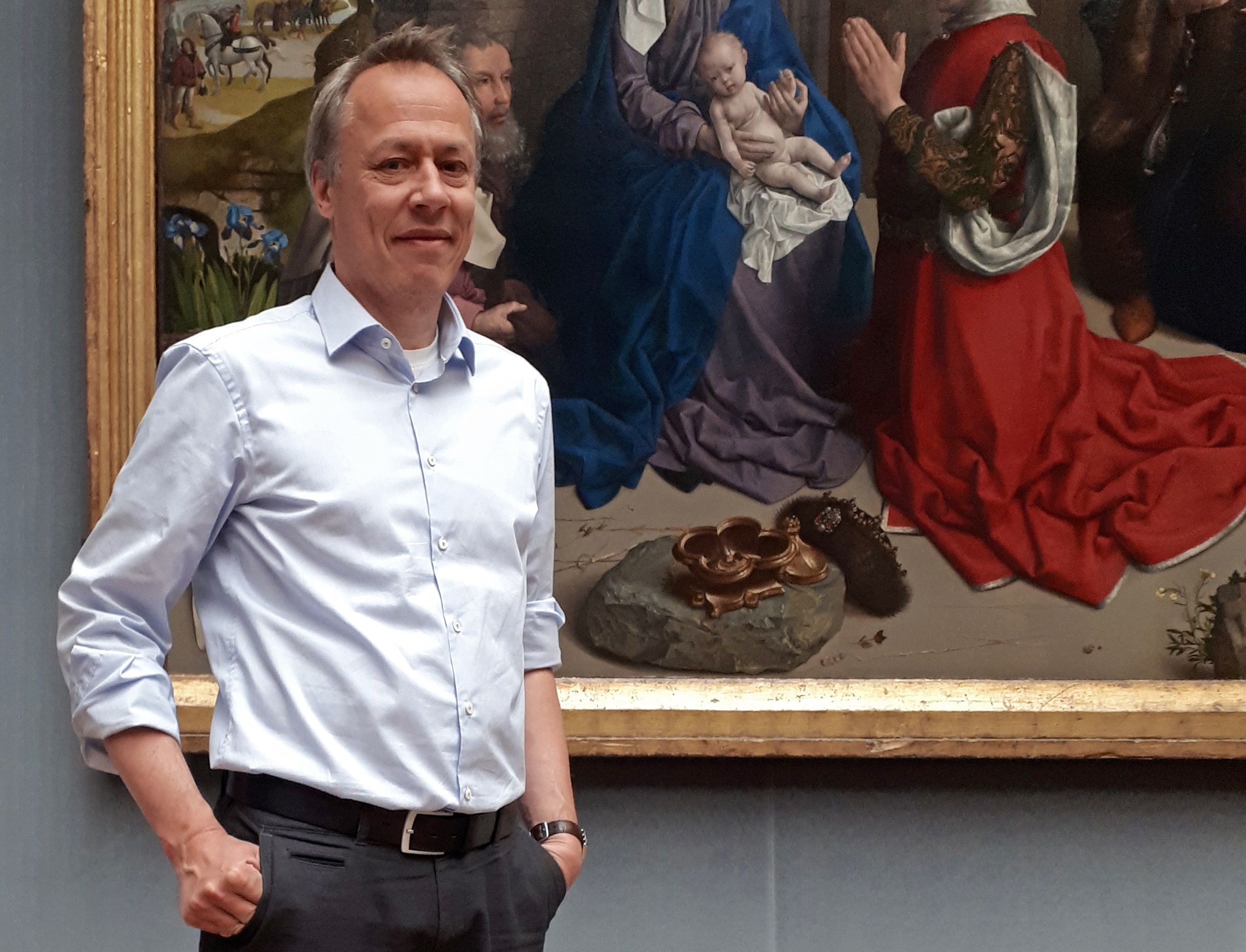 In 1992, after achieving a Master’s degree with a thesis on a mid-fifteenth-century German painter, I embarked on a PhD dissertation on Rogier van der Weyden and the Master of Flémalle. It was submitted to the Freie Universität in 1996, and published as a book a year later. I then spent three years as a freelance art historian, working on commissions including the translation of Panofsky’s Early Netherlandish Painting into German, which I completed with my good friend Jochen Sander. From 1999 to 2002, I served as an assistant curator at the Städel Museum in Frankfurt, where Bodo Brinkmann and I produced a scholarly catalogue of early German paintings that was published in two volumes in 2002 and 2005. Then came a brief period of time at the Gemäldegalerie Berlin, where I again worked on a catalogue of German paintings from the thirteenth to early fifteenth centuries.

In 2005 I became curator of Old Masters at the Kunstmuseum Basel. This proved to be a demanding but highly rewarding position; I immediately had to start work on two exhibitions: one on early Northern portrait paintings from the Princely Collections of Liechtenstein and the Kunstmuseum, held in 2006, and the other on the Basel period of Hans Holbein the Younger (chiefly curated by Christian Müller, head of the prints and drawings department). Yet although I thoroughly enjoyed my work in Basel, I could not resist the opportunity to assume responsibility for a collection of early Netherlandish and German paintings that is outstanding in terms of both quality and quantity. In consequence, I returned to the Gemäldegalerie Berlin in 2008 as curator of Northern European paintings before 1600. 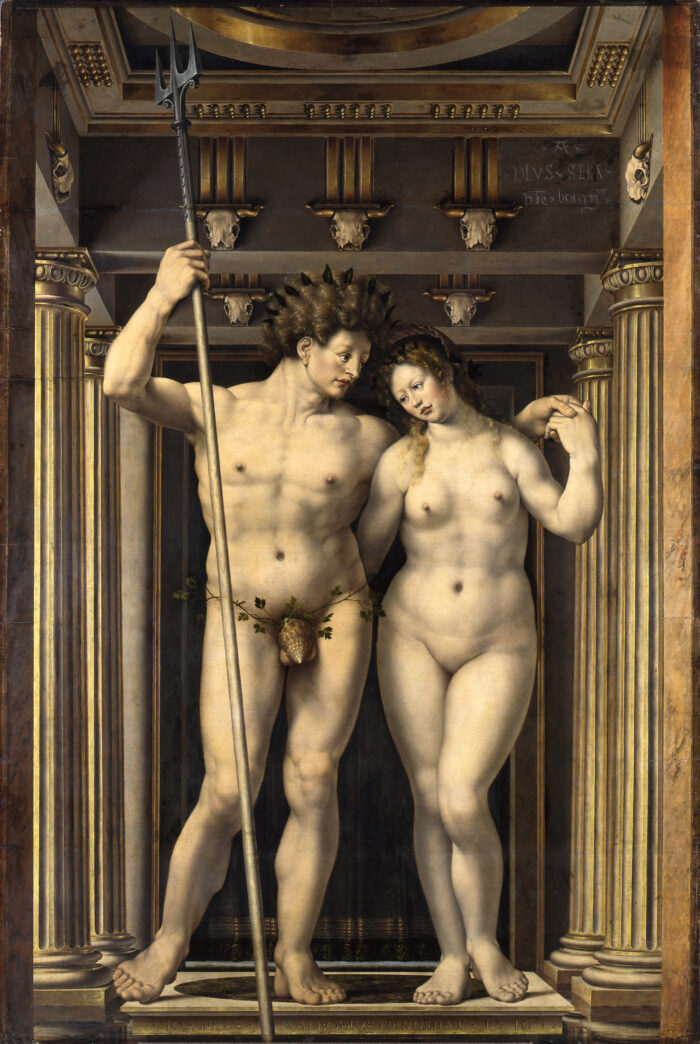 The Gemäldegalerie is one of the leading collections of European pre-1800 paintings worldwide. My section includes about seventy Netherlandish works dating from before 1500 and nearly 180 from the sixteenth century, as well as approximately 260 early German and some early French paintings. This collection was largely built up in the nineteenth and early twentieth centuries by pioneering scholars of the paintings of Northern Europe such as Gustav Friedrich Waagen, Wilhelm Bode, and Max J. Friedländer. With respect to the fifteenth-century Netherlands, it comprises works by all the great masters, including three (maybe four) paintings by Jan van Eyck, three tripartite altarpieces by Rogier van der Weyden plus seven panels by him and by his workshop, two very large altarpieces by Hugo van der Goes, and two panels by Geertgen tot Sint Jans. Paintings dating from the sixteenth century include five by Gossart, two by Pieter Bruegel the Elder, several by Quinten Massys and Lucas van Leyden, and many more besides.

In a sense, I see myself as continuing the legacy of Friedländer. However, much has changed since the days of that eminent connoisseur, both in the position that museums occupy and in the curator’s job description. It is scarcely possible today to make major acquisitions: indeed, it has been many decades since the gallery last acquired an early Netherlandish painting. Nonetheless, much can be done with the existing collections.

A task that is virtually the sole prerogative of the museum curator, and one that I find especially rewarding, is the rearrangement of the galleries. In 2009 I started with some smaller cabinets, and by 2013 I had completed a new hanging in all the early Netherlandish and German exhibition rooms. Rearranging is truly a creative and highly pleasurable activity. Most of all, however, it changes one’s perception of the works: they often look different when transferred to a different location – maybe a room of a different size or height – and combined with different paintings than before. When rearranging the first rooms in 2009, we introduced showcases for small-sized paintings that enable visitors to approach to just a few centimeters from each work. This is a great improvement for panel paintings executed in minute detail, such as Van Eyck’s Madonna in the Church, which had previously been displayed in deep, rather poorly-illuminated, alcoves. For the room containing these showcases, I decided to depart from the traditional arrangement by school, instead combining works from the Netherlands, Germany, and France. This meant that visitors can see a Crucifixion by Jan van Eyck or one of his assistants next to a Crucifixion in a landscape by Konrad Witz, a painter active in Basel around 1440 who was well trained in the principles of Eyckian art, possibly even in the Bruges master’s workshop. 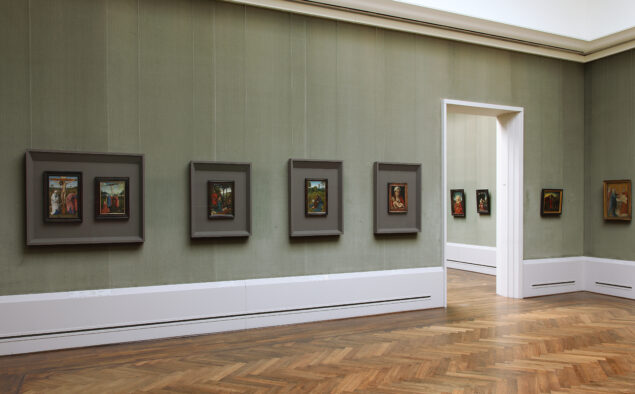 Presentation of small-scale Netherlandish and German paintings of the 15th century in the Gemäldegalerie, Staatliche Museen zu Berlin

Preparing exhibitions is another challenging and rewarding aspect of our work, as every curator knows. When I came to the Gemäldegalerie, Jochen Sander of the Städel Museum and I were already working on an exhibition on Rogier van der Weyden and the Master of Flémalle that would bring together about forty-five works in Frankfurt and Berlin in 2008–09. In 2009, Friso Lammertse of the Museum Boijmans-Van Beuningen suggested that we produce an exhibition on pre-Eyckian art. This eventually took place in Rotterdam in 2012, entitled The Road to Van Eyck. We initially planned to also show the exhibition in Berlin, which unfortunately proved impossible. Several smaller studio exhibitions followed: The Ghent Altarpiece in Berlin 1820–1920 in 2014; in 2015–16 my colleague Michael Roth of the Kupferstichkabinett and I produced a show on paintings and drawings by Hans Holbein father and son, focusing especially on Holbein the Younger’s Darmstadt Madonna and his Portrait of Georg Gisze. In 2016, when we celebrated the 500th anniversary of the death of Hieronymus Bosch, we presented our Bosch panel painting together with a number of Bosch-inspired works of the sixteenth century and – especially – alongside the Bosch drawings of the Berlin collection.

My favorite exhibition, however, is the one we produced in 2017–18. For this event, we succeeded in reuniting the wings of what is arguably Jean Fouquet’s most important work, the Melun Diptych (ca. 1455) for the first time since 1937. Berlin owns the donor wing, while the KMSKA in Antwerp owns the corresponding wing with the Virgin Mary. I am currently working with my colleagues from the prints and drawings department, the sculpture collection, and the museum of applied arts on an exhibition of Late Gothic art to take place in 2020–21. All the exhibitions I have mentioned were preceded by in-depth technical and art-historical research, enabling us to present new findings in the accompanying publications. 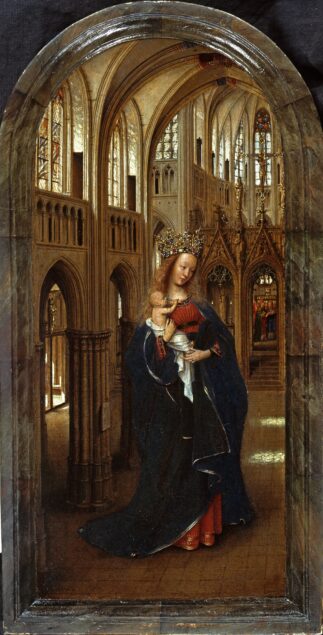 Our most important current research project is the preparation of a scholarly catalogue of our fifteenth-century Netherlandish paintings, which will also include French works dating from that period. Katrin Dyballa, who has been appointed specifically to handle this project, is responsible for two-thirds of this catalogue. I will be contributing the rest, while several restorers are also involved. We hope to finish the manuscript in the course of 2020.

If you ask me to name my favorite work in the collection, I cannot give a definitive answer. I have a great fondness for many works in the Netherlandish, German, and French sections, besides which one’s attitude towards individual objects naturally changes over time.

At present, I would say that Jan van Eyck’s Madonna in the Church is very dear to me: hardly the most original choice, given that the painting is undoubtedly one of our highlights. However, I have been working on it recently and find myself once again astonished by its exceptional qualities as a work of art, the incredible acuteness of Jan’s observation, and the painting’s ceaselessly enigmatic character.

I have been a CODART member since 2005, but I have to confess that it was not until 2016 that I attended my first conference. The friendly atmosphere at the Madrid event and the open exchange with colleagues was truly an inspiring experience. I especially value the lack of emphasis on hierarchy at CODART conferences. It was therefore a pleasure and an honor to host CODART 22 at our museums in Berlin at the beginning of June 2019.

Stephan Kemperdick is Curator of Early Netherlandish and Early German Painting at the Gemäldegalerie, Staatliche Museen zu Berlin. He has been a member of CODART since 2005.