Last week M Leuven announced two important additions to their collection. First of all, at an international auction, the museum was able to acquire a small wooden dragon:  a part of a fifteenth-century choir stool that most likely originates from the Leuven St. Peter’s Church. In addition, former alderman Mia Hamels-De Kelver donated liturgical silverware from her brother Jan De Kelver (1922-2014), former pastor-dean of St. Peter’s Church, to the museum. 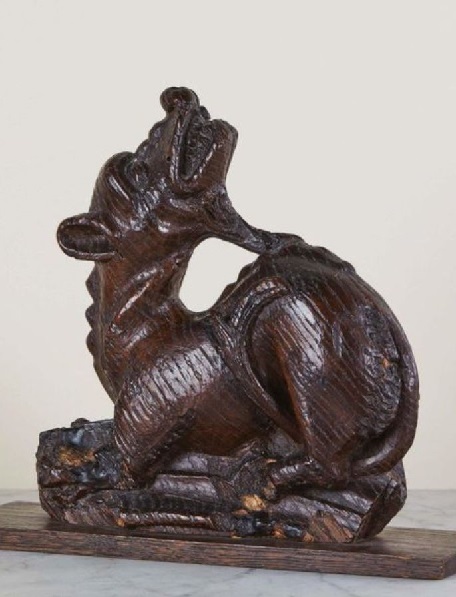 The graceful oak sculpture represents a dragon with its mouth wide open. The wooden handrail of the choir stool probably dates from the middle or second half of the fifteenth century. The statuette most likely originates from the St. Peter’s Church in Leuven. Further research will reveal when the oak sculpture was made and who the maker is. Presumably, there are two options: Jan II Borman, who made the Triumphal Cross in St. Peter’s, or possibly Nicolaas De Bruyn, the hand behind the ‘Sedes Sapientiae’ and the choir stalls in St. Peter’s.

The donation from the Hamels-De Kelver family consists of a chalice ensemble by the Leuven silversmith Jean Ausloos (1899-1970) and a pair of oil boxes from the Brussels atelier Devroye Frères, both of which being specialised in ecclesiastical precious metals. Ko Goubert, collection curator, explains: “Historical liturgical silverware from Leuven churches and monasteries form an important part of M’s collection, which is now complemented by two fine examples of church silver from the second quarter of the twentieth century. These are examples of the typical fusion of Art Deco styling with neo-medieval decorative motifs of that period.”