Gerard Houckgeest (1600-1661), Interior of the Oude Kerk with View of the Organ and Organ Balcony (detail), 1651
Museum Prinsenhof Delft

The Museum Prinsenhof Delft has recently acquired the painting Interior of the Oude Kerk with View of the Organ and Organ Balcony by Gerard Houckgeest (1600-1661) from a private collector. The painting from ca. 1650-51 is a key piece in the oeuvre of this founder of the realist Delft church interior and was out of public sight for a long time. This purchase significantly strengthens the museum’s collection of Delft paintings.

Houckgeest played an important role in the development of Delft painting in the second half of the seventeenth century. His surviving oeuvre is small, consisting of fewer than 30 works. According to the museum, the new acquisition is definitely one of his finest works. It displays the illusionist effects characteristic of Houckgeest, with its exceptional use of perspective and light. Due to the prominent position of the Delft Oude Kerk’s organ in the painting, this piece occupies an entirely unique place in the artist’s oeuvre. 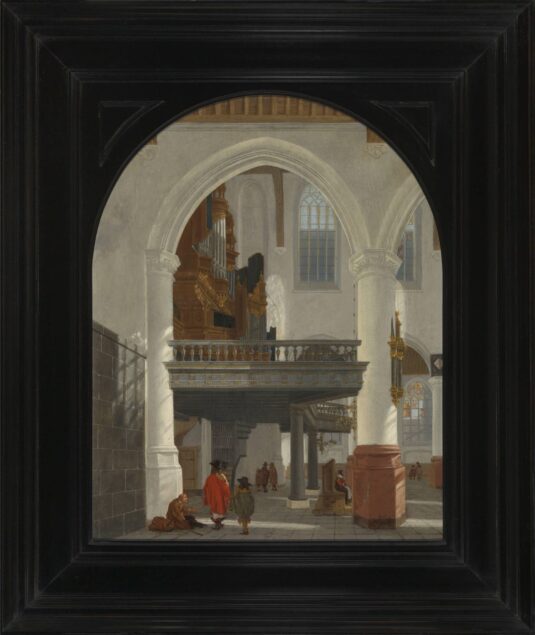 Gerard Houckgeest (1600-1661), Interior of the Oude Kerk with View of the Organ and Organ Balcony, 1651
Museum Prinsenhof Delft

The newly acquired painting is one of an important series of innovative church interiors painted by Houckgeest in the period 1650-1651. The series had a powerful influence on contemporaries such as Emanuel de Witte, Hendrick van Vliet and Cornelis de Man. Artists like Pieter de Hooch and Johannes Vermeer were also inspired by his use of perspective and his representation of light and space. The year 1650 marks the starting point of this development, characterized by significant innovations in the domain of composition, perspective and palette. That year, Houckgeest painted his world-famous Interior of the Nieuwe Kerk in Delft with the Tomb of William the Silent (now at the Hamburger Kunsthalle). In the years following, Houckgeest painted another eleven Delft church interiors: four of the Oude Kerk and seven of the Nieuwe Kerk. Within this series, one recognizes common compositional themes manipulated by Houckgeest in unexpected ways. Houckgeest’s church interiors dating from this period were consequential for the subsequent development of the Dutch church interior in painting.

Since the mid-nineteenth century, the painting was in the possession of a British family and therefore unknown for a long time. When it re-emerged at an auction at Christie’s in 2006, Walter Liedtke (1945-2015) called the painting “a missing link in the development of architectonic painting in Delft”. Liedtke was one of the world’s leading experts on old Dutch and Flemish painting and carried out considerable research on church interiors and also on Houckgeest. Until now, the museum has held only one painting of the seventeenth-century interior of the nearby Oude Kerk in Delft, by his contemporary, Cornelis de Man. In other parts of the museum’s collection, too, representations of this interior are scarce. In addition to being a superior example of the art of painting, Houckgeest’s work is therefore also an important contribution to the museum’s collection as a visual and historical source, providing a glimpse into the ecclesiastical life of Delft in the seventeenth century.

The acquisition was made possible by the generous support of the Vereniging Rembrandt, Stichting Van Oosten – Oosterholt, Friends of the Museum Prinsenhof Delft, and a private donor. Private funds covered more than 90% of the cost of purchase in this way. The painting is on display in the museum’s recently renovated installation ‘Delft Masters of art and science’.