The National Gallery of Art has purchased Jan van Kessel’s Insects and a Sprig of Rosemary. Formerly in the collection of Mr. and Mrs. Paul Mellon, the painting is an especially fine example of the artist’s work.

The painting depicts a sprig of flowering rosemary surrounded by two butterflies, a bumblebee, a moth, beetles, a cockchafer bug, and several other insects. Although his rendering of the insects is so accurate that individual species can be identified, Van Kessel composed his scene to suggest an animated world. The little creatures climb all over the sprig of rosemary, seemingly drawn to its sweet fragrance; the delicate shadows they cast on the off-white ground enhance the three-dimensional, lifelike character of the scene. Insects and a Sprig of Rosemary relates to the way collections of naturalia were displayed in Antwerp during the 17th century. Van Kessel likely referred to drawings of plants and animals made from life when he painted this small panel, although he also consulted printed sources for some of his images. This work—remarkable in both quality and condition—joins five paintings by Van Kessel and his workshop that are already part of the Gallery’s collection.

The purchase was made possible thanks to the generosity of The Richard C. Von Hess Foundation, the Nell and Robert Weidenhammer Fund, Barry D. Friedman, and the Friends of Dutch Art. 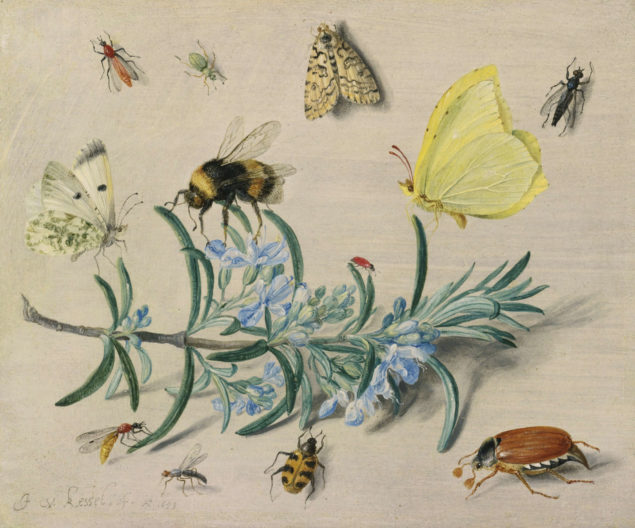