Peter Bruegel the Elder’s Dulle Griet (Museum Mayer van den Bergh, Antwerp) has regained its original appearance with the rediscovery of a blue-green sky. The restoration has revealed Bruegel’s refined brushwork and a number of striking details that were hidden for decades under layers of overpainting and yellowed varnish. Research indicated that the painting does not date from 1561, for instance, but from 1563 – the year in which Bruegel married and moved from Antwerp to Brussels.

Bruegel’s Dulle Griet (‘Mad Meg’) was sent to the Royal Institute for Cultural Heritage (KIK-IRPA) in Brussels for study and restoration in January 2017 and spent over eighteen months there. The painting is now traveling to the Kunsthistorisches Museum in Vienna, where it will be one of the highlights of the large-scale Bruegel exhibition that will open the international celebrations to mark the 450th anniversary of Pieter Bruegel the Elder’s death. It will return to the Antwerp museum in spring 2019. 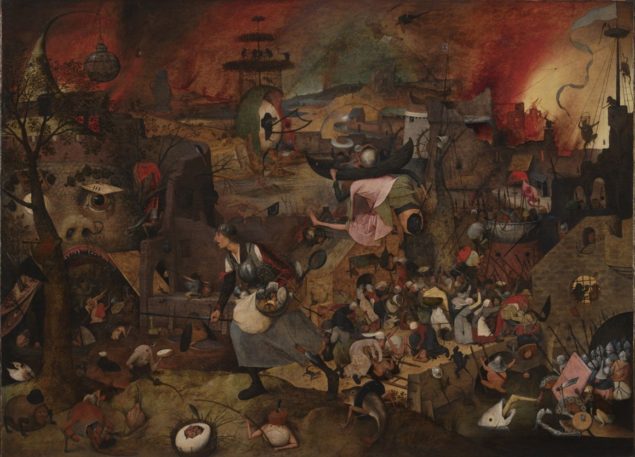 The multidisciplinary study made several spectacular discoveries, which amend the results of earlier research performed in 2011 and 2012. The use of new, more advanced techniques allowed the painting’s various underlying layers to be documented and studied one by one. Macro-XRF maps showing the distribution of copper and calcium carbonate reveal that Bruegel did not add the title ‘Dul’ to the panel: the looping inscriptions or scratches were applied later – perhaps accidentally – and were also detected elsewhere in the painting. The dating of the work has also been adjusted by two years, as the date ‘1563’ was discovered on the panel after cleaning and the removal of layers of historical overpainting. The previously accepted date of the work was 1561. 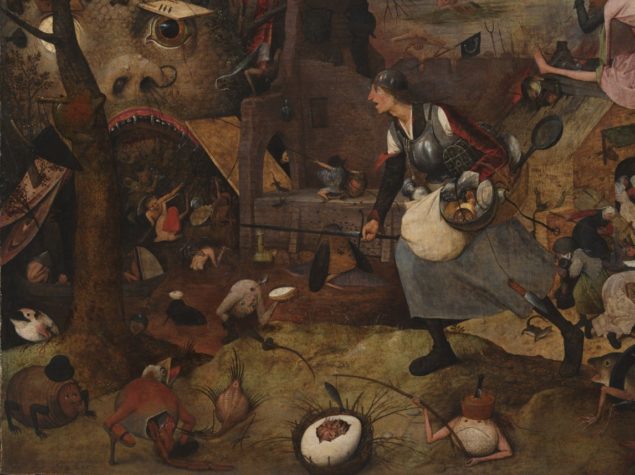 Detail of Dulle Griet after restoration

The new dating of Bruegel’s Dulle Griet immediately triggered a flurry of debate as to where the artist produced this infernal scene: Antwerp or Brussels? Bruegel most likely married Mayken Coecke at the Kapellekerk in Brussels in August 1563. The banns are documented as having been taken out on 25 July that year at the Cathedral of Our Lady in Antwerp. It is not known precisely when Bruegel moved to Brussels so the question of where the painting was done cannot be answered at this point. He used a similar type of panel in the years both before and after 1563 and we do not know where he purchased them. Nor is it known how long Bruegel worked on a particular painting. Could he have completed this hell scene in the space of just four or five months and was it done entirely in Brussels? Did he finish the painting in Antwerp before moving to Brussels? Or did the artist take the semi-finished panel with him to his new home? Some of the questions surrounding Bruegel’s Dulle Griet, will have to go unanswered for the time being.

The painting was previously known as an obscure, weird landscape with a dark red sky and touches of brown. Technical analysis of a color drawing of ‘Dulle Griet’ in the Kunstpalast in Düsseldorf revealed a considerable amount of information regarding the Antwerp painting’s original palette. The drawing – previously attributed to Pieter Bruegel the Elder himself – turned out to be an early copy after the painting. Its colors are remarkably well preserved and so the sheet offers unique and detailed evidence of the painting’s original colors. 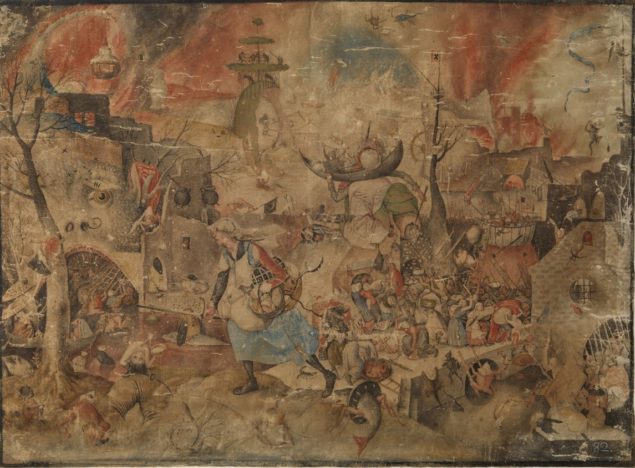 Two of the color tones in the panel – blue (smalt and azurite) and green – have lost much of their intensity, altering the scene’s overall appearance. Meg’s dress and the flag, for instance, were originally a deep blue. They were done in smalt, however, which was cheaper and more readily available than the extremely costly lapis lazuli. The pigment azurite (bright to greenish blue) in the sky and hell’s hat also has a much darker appearance. The green pigments of the frog, the foliage top left and the figure in the bottom right now have a brownish tinge. 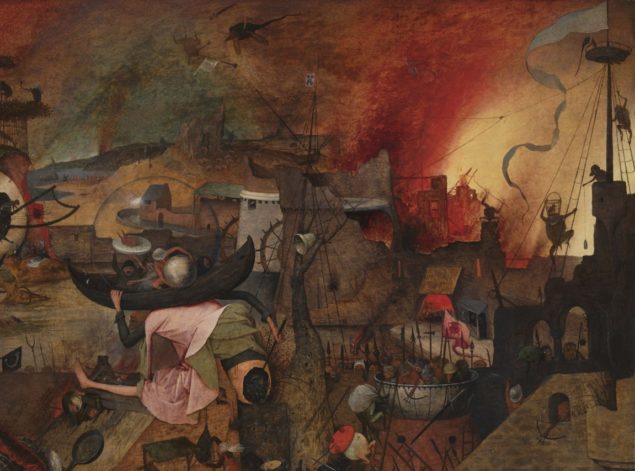 Detail of Dulle Griet after restoration

The work looks much fresher after restoration and shows details that were invisible for many years, such as the teddy bear, the finely executed helmets and the beautiful landscape in the background. The colour palette is lighter and more varied. Bruegel’s brushstrokes and his outstanding painterly skills are visible once more. The sense of space has been fully restored and the entire scene displays much greater depth.