An unforeseen discovery was made when in 2011 the crypt beneath the Church of the Nativity of Our Lord at Loreto in Prague was opened: a hitherto unknown fresco decoration from 1664 inspired predominantly by Netherlandish prints. The murals were executed in monochrome black wash with some additions al secco.
On the occasion of the exhibition Ars Moriendi. The Loreto Crypts. From the History of Burying in the Capuchin Convents, Loreto curators Markéta Baštová and Petr Bašta are now presenting their findings to the public. A recently published extensive catalogue is also available in English (ISBN 978-80-905228-2-4, see www.loreta.cz).

The most prominent fresco is an adaptation of Rembrandt´s etching The Raising of Lazarus in the version of the so-called larger plate (B. 73), 5th to 7th state. It is a very interesting document for the reception of this important composition and Rembrandt’s graphic art in Bohemia, made when the artist was still alive.

While enlarging the composition nearly a hundred times in size, from the 35.9 x 25.7 centimetres of the etching to the 3 x 2.73 metres of the wall, the unknown Loreto artist shows an interesting, creative approach. In the first place, he reversed the image horizontally. In doing so, he stretched Rembrandt’s vertical composition. The elevated position which Rembrandt gave to the figure of Christ is changed in the fresco. The group of witnesses and the figure of Lazarus – the actual role models for the crypt’s clientel – appear in the same scale and prominence. By this means coming closer to the beholder they integrate him into the scene.

The wall looks like a painted altarpiece, an effect that is strengthened by its position on the eastern wall of the crypt. The format and presentation distinguish the Lazarus fresco from the others, which depict only single figures. The models followed include a print by Cornelis van Dalen after Govert Flinck’s Allegory of the Birth of Wilhelm Heinrich von Brandenburg in the Neues Palais in Potsdam, which the artist used for an Angel of the Last Judgement; A Skeleton Drawing a Bow and Chronos with Scythe after a print by Boëtius Adamsz. Bolswert reproducing David Vinckboons’ The Battle of Death, Hollstein 10.I; Homo Bulla after Hendrick Goltzius’s engraving Quis Evadet.

We do not know whether the iconographical program, which was clearly drawn from a collection of prints, was suggested by the patron of Loreto, Countess Elisabeth Apollonia of Kolowrat, née Tilly, or was an invention of the artist. The identity of the artist is undocumented, but a possible candidate is the lay brother Cosmas of Austria, a pupil of the Vienna painter Tobias Pock. Both painters had repeatedly worked for the Capuchin order. 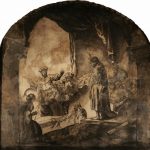 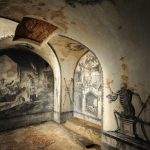