After its world premiere at the Sundance Film Festival last week, this week The mill & the cross saw its European premiere at the Rotterdam International Film Festival. The film, based on Michael Francis Gibson’s novel bearing the same name, in which the story of Christ’s passion is set in Flanders in 1564, the year Pieter Bruegel painted his masterpiece The way to Calvary.

Pieter Bruegel’s epic masterpiece The way to Calvary depicts the story of Christ’s Passion set in Flanders under brutal Spanish occupation in the year 1564, the very year Bruegel created his painting. From among the more than five hundred figures that fill Bruegel’s remarkable canvas, The mill & the cross focuses on a dozen characters whose life stories unfold and intertwine in a panoramic landscape populated by villagers and red-caped horsemen. Among them are Bruegel himself (played by Rutger Hauer), his friend and art collector Nicholas Jonghelinck (Michael York), and the Virgin Mary (Charlotte Rampling).

The mill & the cross invites the viewer to reconstruct from Bruegel’s preparatory drawings the deeper meaning of scenes. Following the painter’s hints sketched on paper, the viewer pieces together an epic story of courage, defiance and sacrifice, and, like a detective on a path of clues, succeeds in reading the hidden language of symbols.

Bruegel was, and still is, the wisest philosopher among the painters. In most of his works he took pains to hide the obvious by planting distractions somewhere else. The hidden should be palpable -that was his stratagem for showing the quintessence of suffering. Namely, that nobody cares about it. The sufferer is left alone, abandoned, forgotten… The others have to live their lives and somehow make the most out of it.

There are other themes in The mill & the cross as well: That only an artist can stop time, capture the moment and immortalize it. Or that the elements that build a single image hanging in a museum can be plentiful… But nothing is more important than that the hidden is the essence of Truth.

One of today’s most adventurous and inspired artists and filmmakers, Lech Majewski, translates The way to Calvary into cinema, inviting the viewer to live inside the aesthetic universe of the painting as we watch it being created. As various lives evolve within the film frame, we witness Bruegel capturing shards of their desperate stories on his canvas-in-the-making. Confronting the Spanish inquisition bloodily repressing the rise of Protestant reform in the Low Countries, the film offers a vibrant meditation on art and religion as ongoing, layered processes of collective storytelling and reinterpretation. The mill & the cross is also a feast of stunning visual effects, a provocative allegory and a cinematic tour de force on religious freedom and human rights. 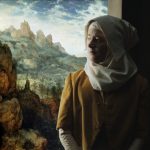 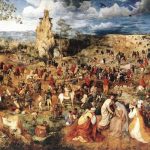 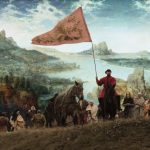 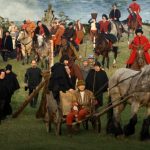