For a long time it was assumed that Rembrandt painted the portrait, but since 1968 it has been clear that it is not a Rembrandt. Now, 50 years later, it has been irrefutably proven that it was made by Rembrandt’s master pupil Govert Flinck. The painting can be seen from 24 November in the exhibition Rembrandt and Saskia: Love and Marriage in the Dutch Golden Age at the Museum of Friesland in Leeuwarden.

Govert Flinck initially studied painting in Leeuwarden with Lambert Jacobsz. Govert Flinck and Saskia both lived in the then small town of Leeuwarden and knew each other, and they moved to Amsterdam in the same year (1634). Flinck went there to learn from Rembrandt van Rijn, Saskia went as Rembrandt’s wife.

Flinck’s painting can be admired from 13 February onwards in the exhibition Ferhaal fan Fryslân in the Museum of Friesland and later this year in Rembrandt and Saskia: Love and Marriage in the Dutch Golden Age. This exhibition will run from 24 November 2018 and will mark the start of Rembrandt nd the Golden Age in 2019. As the most famous Frisian bridal couple ever, Rembrandt and Saskia are the leitmotiv of this exhibition. All aspects of ‘Love, Betrothed and Forever Connected’ within seventeenth-century noble and patrician circles are explored by means of precious objects, paintings, prints and drawings. 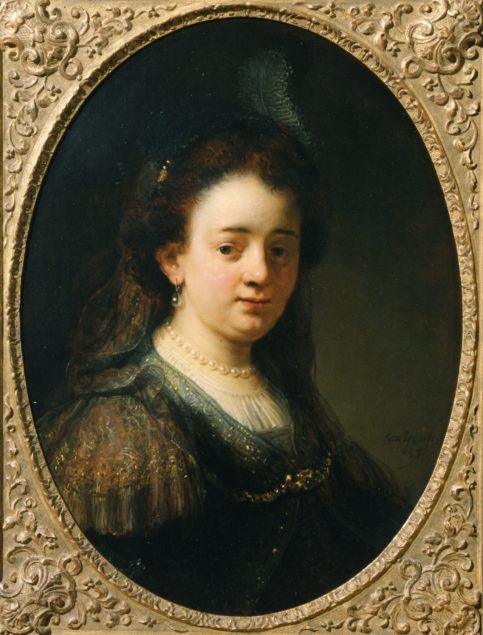 Govert Flinck, (1615-1660), Portrait of Saskia Uylenburgh, ca. 1635
Museum of Friesland, Leeuwarden, on loan from the Cultural Heritage Agency of the Netherlands