A self-portrait by Van Dyck that was dismissed a decade ago as a copy is now hanging in the Minneapolis Institute of Arts, Minnesota, as an original work. The painting, which has been authenticated by experts, was quietly put on display in February, having been lent by a US collector based on the West Coast.

An unpublished paper on the self-portrait, prepared for the owner, dates the work to around 1629 and states that the attribution is accepted by four key experts: Susan Barnes, a co-author of the 2004 Van Dyck catalogue raisonné, Christopher Brown, the former director of the Ashmolean Museum in Oxford, David Jaffé, a former senior curator at the National Gallery in London, and Malcolm Rogers, the outgoing director of the Museum of Fine Arts, Boston. The attribution is also accepted by Patrick Noon, the head of paintings at the Minneapolis museum.

The work is particularly important because it is the self-portrait by which Van Dyck wanted to be remembered. The artist produced an etching of the image in 1630 for the frontispiece of his book Iconography.

The late Oliver Millar, another co-author of the 2004 catalogue raisonné, dismissed the work as “possibly a very early copy”. He assumed that the original painting was missing.

When the self-portrait was put up for sale at Lempertz in Cologne on 12 May 2012, it was described as a “copy after Van Dyck”. The auction house estimated its value at €30,000 to €40,000. The painting fetched €512,000, showing that at least two bidders were reasonably confident that it was by Van Dyck.

The unnamed buyer had the work cleaned and also assembled evidence to prove that it is an original. The picture could eventually be worth up to £10m, the sum paid by the National Portrait Gallery in London for the artist’s 1640-41 self-portrait, which it bought last year.

Cleaning reveals quality
The work on show in Minneapolis was first recorded as belonging to Robert Holford of Westonbirt in the mid-19th century. It passed through several English owners before being sold at Christie’s in 1957, when it went to a collector in Switzerland and then to another in Germany. The picture was generally accepted by scholars as a work by Van Dyck, until it was dismissed in the 2004 catalogue raisonné.

A combination of degradation, overpaint and old varnish had left much of the painting difficult to read, but now the self-portrait has been cleaned, its quality has been revealed. Infrared images show a number of pentimenti (changes by the artist)—further evidence that it is an original. The London-based dealer Philip Mould says that he was involved in “research and conservation” of the work.

Part of the confusion has been caused by the gold chain around Van Dyck’s neck. Millar believed that it was the chain given to the artist by Charles I in 1633, but this raised difficulties because the brushwork is atypical of Van Dyck’s English period. However, recent research suggests that the chain is the one presented to the artist by Archduchess Isabella in December 1628, while Van Dyck was working in Antwerp. Stylistically, the picture fits in much better with this period. Until recently, it was assumed that the artist was closing his cloak, but after cleaning, it became apparent that Van Dyck is opening the garment, to proudly reveal the chain.

The work has only been exhibited once in nearly four centuries, at the London-based dealership Agnew’s in 1968. The Minneapolis museum plans to display the painting until 2017. 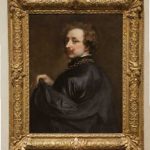