This article was previously published in the CODART eZine no. 8, Autumn 2016.

The CODART NEGENTIEN Congress, which was held in Madrid from June 19 through June 21, 2016, was organized in partnership with Museo Nacional del Prado, Museo Thyssen-Bornemisza, Museo Lázaro Galdiano and Patrimonio Nacional, and focused on the issue of art-historical attributions and its significance for curators. The congress theme, Connoisseurship: Between Intuition and Science, was discussed from a variety of vantage points in lectures, statements, and a debate. One of the speakers was Fenna Poletiek, who spoke about how cognitive psychology can help art historians by attribution questions.

Authentication by the Crowd: How Lay Students Identify the Style of a Seventeenth Century Artist

Our ability to learn how our environment works, effortlessly, without intention or instruction, and even without knowing what we have learnt, is essential to survival. Using their “implicit learning” skills, children eventually know how to attract their mother’s attention, master the rules of social interaction, the highly complex, abstract rules of language (Gomez & Gerken, 1999), and develop the ability to recognize the structure of visual displays (Jiang & Song, 2005).

We propose here to look at the recognition of artistic style as a special case of this implicit learning skill. Indeed, the ingredients are almost the same. First, learning the unique features of a style requires heavy exposure to exemplars of that style. Children pick up language rules as they hear language in which these rules are applied. Studies suggest that expertise, in general, derives more from training with, and exposure to, materials related to that expertise, and probably less than folk psychology suggests from innate ability (Ericson, Krampe & Tesch-Roemer, 1993). Second, the process of learning a style is much like a child’s gradual understanding of grammar, in the sense that it is mainly unintentional. We don’t typically listen to language with the intention of identifying the grammatical rules that the speaker is applying; we are focused on meaning. Similarly, art historians look at paintings by a variety of painters for different purposes: they may enjoy them, be assessing their quality, looking at the colors and the brushstrokes, or reflecting on the meaning the artist has sought to convey. All this means that learning different styles is something that occurs incidentally, as a side-effect of exposure rather than as a deliberate endeavor.

In support of the incidental learning hypothesis, studies of implicit learning of a simple artificial language suggest that an explicit learning instruction (for instance, “try to identify the grammatical rules underlying the sentences you are going to hear”) does not enhance learning (Reber, 1989). Instead, experiments of this kind tend to encourage people to “memorize” the materials they are exposed to. Paradoxically, doing your best to learn what you want to learn is not always a guaranteed path to expertise; the best way is through seeing, using, or enjoying the materials.

It is not only the learning process that is implicit. The same typically applies to the resulting knowledge, especially when that knowledge is abstract and complex. In the sentence “the man the child cries, runs,” we know immediately that something is wrong; but we will need time to identify the rule that is being violated, if indeed we can do it all. Moreover, if we come up with some syntactical explanation of the violation, can we be sure it is correct?  Art historians probably recognize this experience of knowing immediately that a painting is not a true XX, but finding it hard to articulate the particular stylistic characteristic that has been violated, thus leading to that firm conclusion. The phenomenon is as mysterious as babies learning their mother tongue or recognizing the visual characteristics of their  mother’s face.

In sum, we can discern two similarities between implicit learning and connoisseurship in art. First, acquiring expertise is not necessarily helped by meta-knowledge or by a focused effort to identify the presumed specific structural features underlying the materials we are trying to master. Simple exposure seems to work very well. As the Dutch soccer legend Johan Cruyff used to say: ambitious young players should maximize their contact with the ball, not with the coach. Second, even those who have become experts may well be poor at explaining exactly where their expertise lies. This touches on the question of whether art connoisseurs should be required to explain their stylistic assessments – and what the status of such explanations should be. Do we know what we know well enough to describe it precisely?

To investigate the analogy between style recognition and the general mechanisms underlying implicit learning, we carried out an experiment, using the so-called Artificial Grammar Learning paradigm (Pothos & Bailey, 2000). We wanted to find out whether young adults without any background in art or art history could learn to recognize the style of a particular 17th-century Dutch painter after having been exposed to a number of his paintings. After this training, we tested whether they could tell the difference between 1) other paintings by that artist and 2) similar paintings by other Dutch artists from the same period.

The experiment involved 23 participants with an average age of 22. Pictures of paintings were presented on a computer screen. The material, consisting of photographs (with documentation) of 17th-century paintings, was provided by CODART, in collaboration with the Museum Boijmans Van Beuningen (Rotterdam, Netherlands): 75 paintings assigned to Van Goyen and 25 attributed to contemporaries, all representing landscapes, with or without humans, animals, water, boats, and depicting different seasons: winter, autumn, or summer. Importantly, these features were distributed randomly over the paintings of all artists, ensuring that one feature could not be fully indicative of one particular artist.

In the training phase, 50 paintings by Van Goyen were displayed on a computer screen, one at a time. Participants were informed that all these paintings were by the same artist, and were asked to just “look at them.” In the subsequent test phase, 25 paintings attributed to Van Goyen and 25 paintings not attributed to Van Goyen were presented in random order. The non-Van Goyens came in three categories. First, artworks painted in the “manner of Van Goyen” that are not attributed to any specific artist. The second group included items painted in the “manner of a specific [other] artist” that are not attributed to any specific artist. And the third category were paintings attributed to specific painters other than Van Goyen (e.g. Cuyp). All the paintings in the test phase were roughly similar in style and themes, presenting no obvious anomalies. Participants could press “yes” if they believed that a painting was made by the “same artist as the painter who made the first collection of paintings they saw before,” or “no” if they believed another artist made it. Participants were encouraged to do their best, but not to spend too much time on their decision – just to “follow their first hunch.”

The average proportion of correct ratings (that is, the number of actual Van Goyens attributed to Van Goyen by the participants, and the number of non-Van Goyens not attributed to Van Goyen) was 56.4%,  That was significantly better than chance (p < .01) indicating that the participants’ classifications could not be explained by mere guesswork. Both the actual Van Goyens and the works “in the manner of Van Goyen” were endorsed as Van Goyens in 58% of cases on average. Non-Van Goyens or paintings categorized as “in the manner of a specific artist” were rated as not by Van Goyen in 43% of cases. Figure 1 illustrates the percentage of times the participants rated paintings as work by Van Goyen, averaged for each catalogued category of paintings. 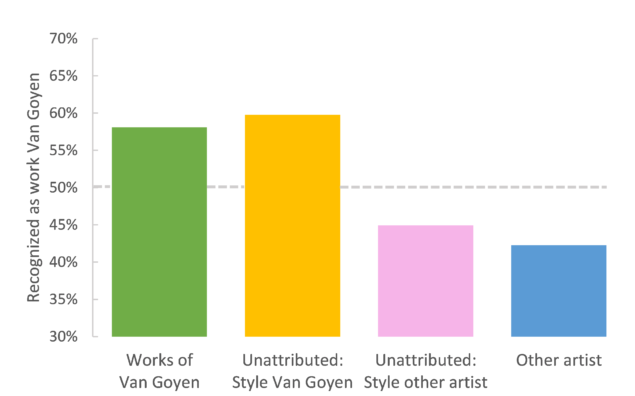 Figure 1. Average ‘work of Van Goyen’ ratings by participants – for each catalogued category. Note that only for the first category “Actual works of Van Goyen”, the percentage also represent the average correct responses.

Hence, the paintings that were either by Van Goyen or made in the manner of this artist were quite reliably separated from similar-looking works produced by contemporaries, suggesting that our lay students learned – though not perfectly –  the style of Van Goyen by just looking at fifty of his paintings. Also, this style (the “manner of Van Goyen”) was quite consistently detected by both the art historian experts making the catalogue attributions and our lay participants.  Fig. 2 shows the mean ratings (over all participants) of each individual painting, with the catalogued actual works of Van Goyen on the left and paintings by other artists or without verified attribution on the right. 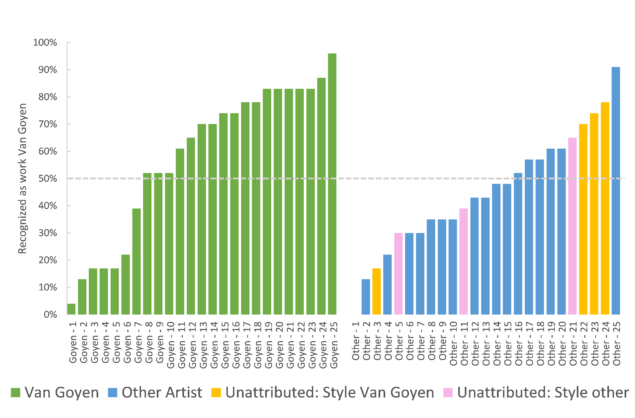 Figure 2. Average ‘work of Van Goyen’ ratings by participants – for each painting. Note that only for the catalogued “Actual works of Van Goyen” on the left, the percentages also represent the correct responses. 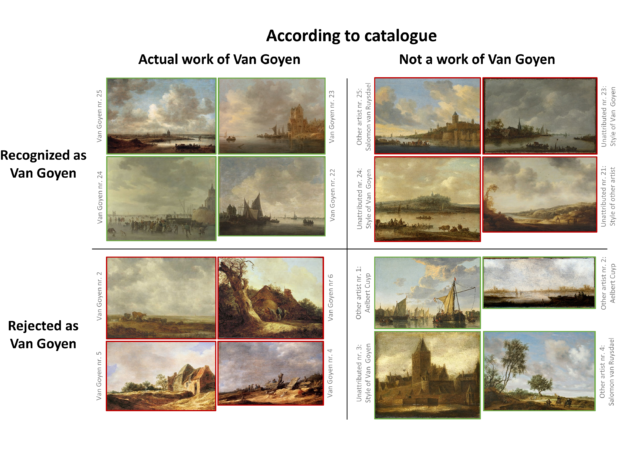 The overview of our results in Fig. 3 might be further interpreted by art experts interested in crucial features distinguishing Van Goyen’s style from others. More generally, our procedure – that is, recruiting laypersons’ implicit learning skills – might be used to supply corroborative arguments in cases of attribution problems. Suppose that experts question that a particular work is by Artist A. A sample of lay persons could first be “trained” by exposure to paintings by A and subsequently tested with other paintings: by 1) A (half of the test items), 2) paintings by A’s contemporaries B, C, D etc. that look as much like A’s paintings as possible, and 3) the target painting.

Two analyses of the data will be useful for the attribution issue: first, the participants’ overall accuracy in detecting A from non-A paintings, and second, the proportion of attributions of the target painting to artist A. The diagnostic value of the rating of the target work increases as the participants are better able to distinguish A from non-A. For example, if the average percentage of accurate ratings in the test phase is 80%, and the proportion of attributions of the target item to A is 75%, this would support the reliability of attributing the painting to A. However, if the overall rating performance is 52%, the same attribution of 75% of the target work conveys little information. The procedure will be more useful as more participants are tested, because of the general principle that a greater number of participants will increase the test’s validity. We are currently preparing an experiment in our laboratory to explore this exciting approach.

In sum, our experiment not only demonstrates that lay students can acquire the ability to recognize Van Goyen’s style, but it also suggests a promising new approach to attribution questions, which simply draws on the implicit learning skills of ordinary lay people.

Fenna Poletiek is an Assistant Professor at the department of Cognitive Psychology at the Leiden University. She spoke on this subject at the CODART NEGENTIEN congress in Madrid.

Kerwin J.F. Olfers is a PhD candidate at the department of Cognitive Psychology at the Leiden University.

We should like to thank CODART as well as Friso Lammertse and Marijn Everaarts from the Museum Boijmans van Beuningen for their cooperation in providing us with a documented database of photographs of the paintings used in the experiment.