From the seventeenth to the nineteenth century, Dutch tiles enjoyed great fame throughout Europe. Millions were imported from the Netherlands to  decorate the walls of  aristocratic palaces, mansions, and even churches. Tiles also served as “emissaries” of Dutch culture by popularizing the image of the country even more successfully than travel writings, because they adorned thousands of rooms and conveyed images of the country’s landscape and also of its customs. From the seventeenth century onwards the Netherlands had close to 200 tile factories (tegelbakkerijen), the most important centers being Amsterdam, Rotterdam, Utrecht, Harlingen, Makkum, and Bolsward. Surprisingly, Delft played only a marginal role. It produced mainly plates, dishes, jugs, vases, and decorative objects, with tiles being just a tiny fraction of the output. Yet such was Delft’s fame that the tiles produced in the Netherlands became known by the historically inaccurate term “Delft tiles.”

Whereas tiles largely served practical purposes in the Dutch Republic, in other European countries Dutch tiles were primarily decorative. They graced aristocratic palaces, staircases, fireplaces, and churches, sometimes covering the walls or even  whole interiors, including ceilings. However, it must be emphasized that this trend had nothing to do with the fascination with Dutch bourgeois culture. Blue painted tiles were simply associated with the fashionable Chinese and Chinese-esque objects (chinoiserie); they had already been used as such in the Trianon de Porcelaine built in Versailles in 1670-1674. Numerous Dutch tiled interiors are still found in France, Germany, Portugal, Spain, Russia, Latvia, Estonia, and the Czech Republic, not to mention places in South America, North Africa, and even India.

The repository of Dutch tiles in present-day Poland has largely remained undiscovered. That said, it should be borne in mind that the country’s present surface area is not the same as that of the Polish-Lithuanian Commonwealth of the past, whose borders changed multiple times over the centuries. The last such change, after the Second World War, resulted in a loss of 48% of the territory in the East, followed by the incorporation of the former German regions such as Lower Silesia, Opolian Silesia, parts of Pomerania, and East and West Prussia. This means that some of the tiled interiors presented in this article originally belonged to the sphere of German rather Polish culture. 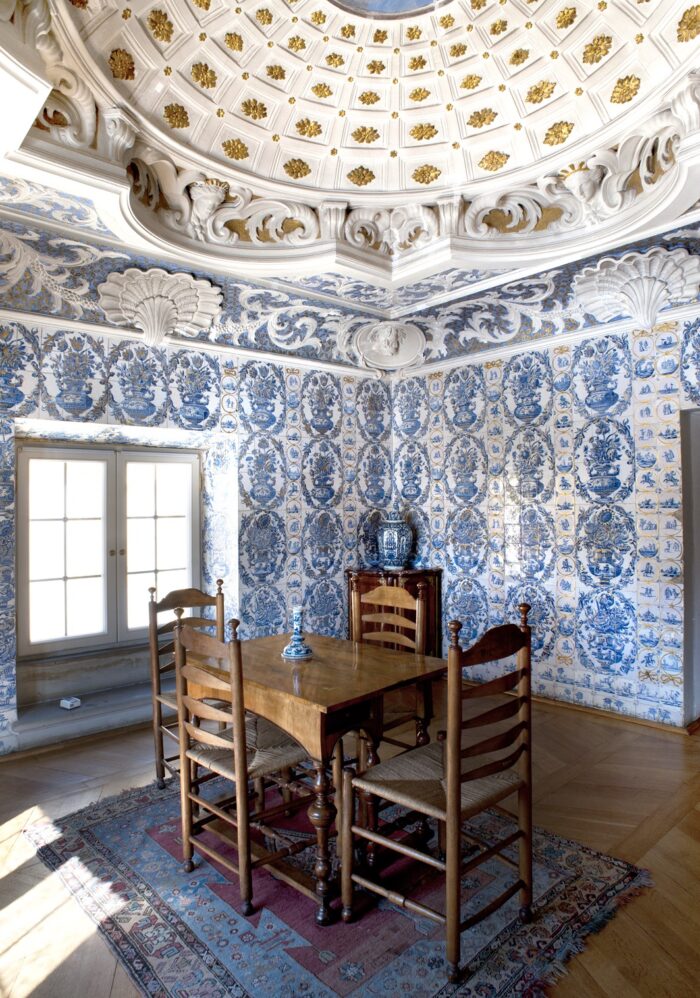 The enduring fondness for Dutch tiles in Poland started in the end of the seventeenth century, probably inspired by the taste of Queen Marie Casimire Louise de La Grange d’Arquien, the French wife of King John III Sobieski of Poland. Marie Casimire greatly admired  Versailles and aspired to have Dutch tiles in most of her palaces. Aristocracy, gentry, clergymen, and affluent townspeople soon followed suit: inventories list hundreds of interiors decorated with Dutch tiles. Unfortunately, many of these rooms have been lost. The impressive display of over 45,000 tiles at the castle in Wiśniowiec (Vyshnivets) in present-day Ukraine was destroyed in the nineteenth and twentieth centuries. The Porcelain Room in Kraków (demolished in c. 1911) is known only from a sketch. In the following account, the authors review a selection of the surviving interiors in Poland, focusing on the most representative examples. It should be noted that some of the interiors were reconstructed after the Second World War.

Before the Second World War, three of the rooms in this palace were decorated with Dutch tiles: a Dutch Room, a Bathroom, and a Bacchus Room. All were destroyed by the Nazis. Two interiors were reconstructed using modern copies in the 1950s. 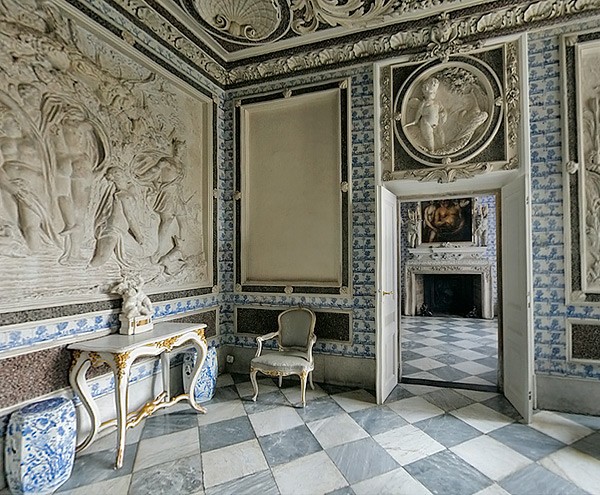 An interior in The Łazienki Palace, Warsaw. Photograph by public domain 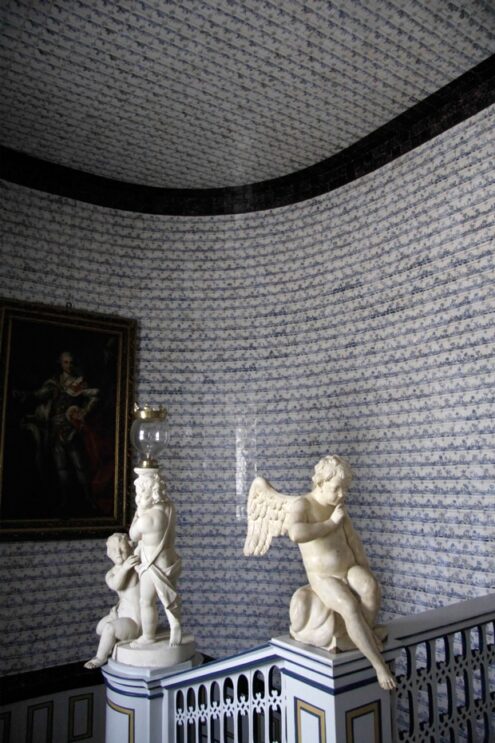 This staircase is decorated with some 10,000 tiles (landscape and shepherd tiles) from Amsterdam and Utrecht, dating from c. 1700-1720.

4. Basilica of Pułtusk, the chapel of St. Francis.

The chapel has approximately 2,000 tiles from Amsterdam: mostly blue tiles depicting landscapes, and eleven purple ones depicting Biblical scenes, dating from c. 1710-1730. They initially adorned the chapel in the Bishop’s Palace in Pułtusk, from where they were moved to their present location in 1786. Another example of Dutch tiles in Polish church interiors may be found in the sacristy of St. Anna’s Church in Warsaw: a small section of wall decorations, probably the remnant of a larger decoration. 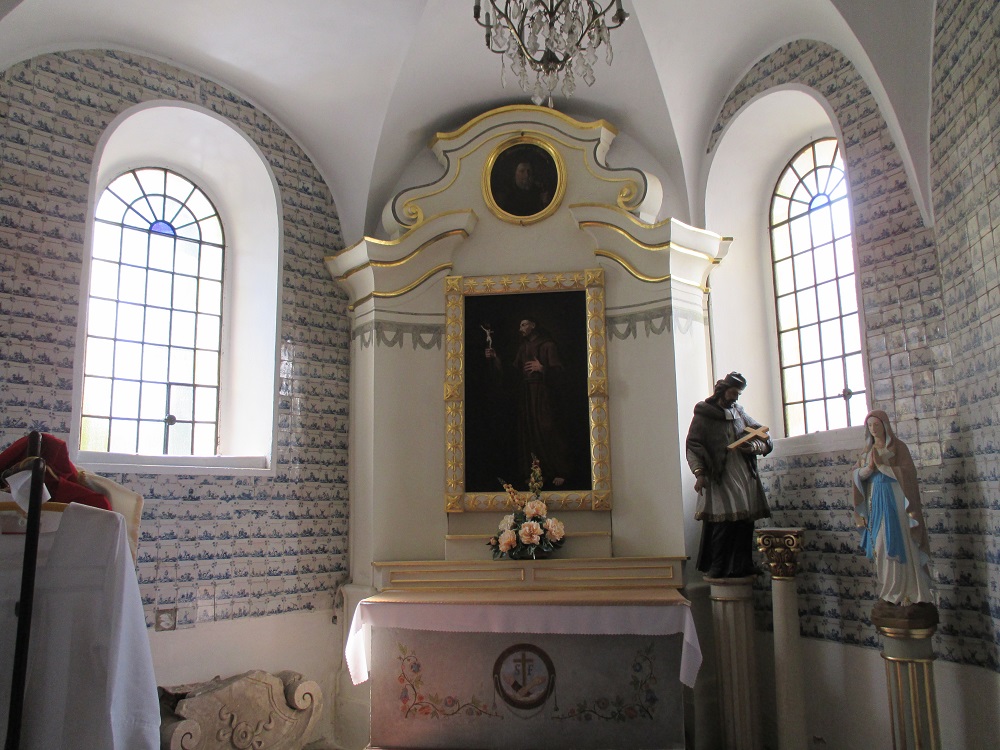 The chapel of St. Francis, Pułtusk. Photograph by Piotr Oczko 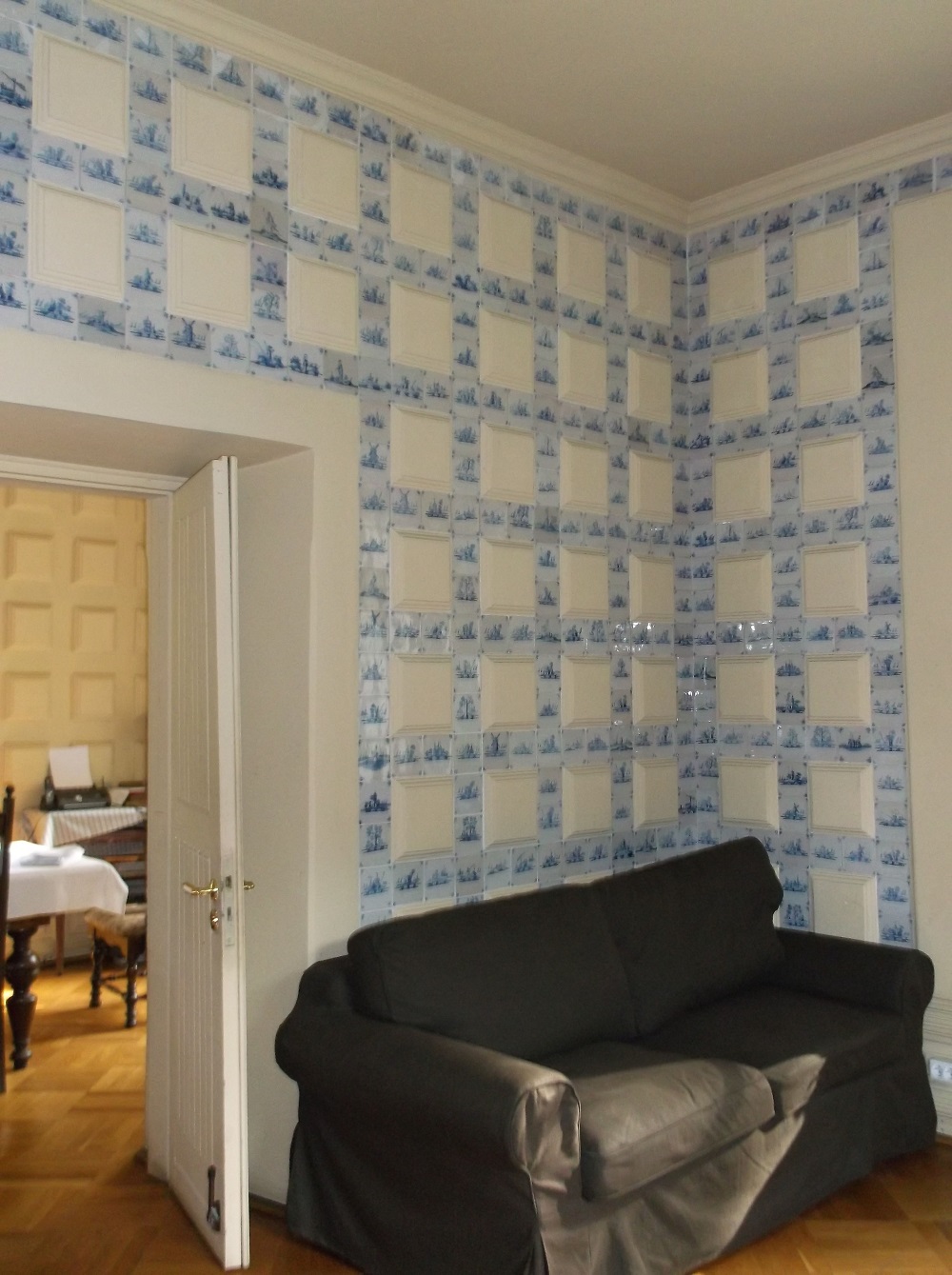 Tiled interior in an annex, Gardzienice. Photograph by Tadeusz Kornaś

5. Gardzienice, interior of an annex in the palace complex.

6. Kraków, Fontana’s Room in the “House Under the Pear” 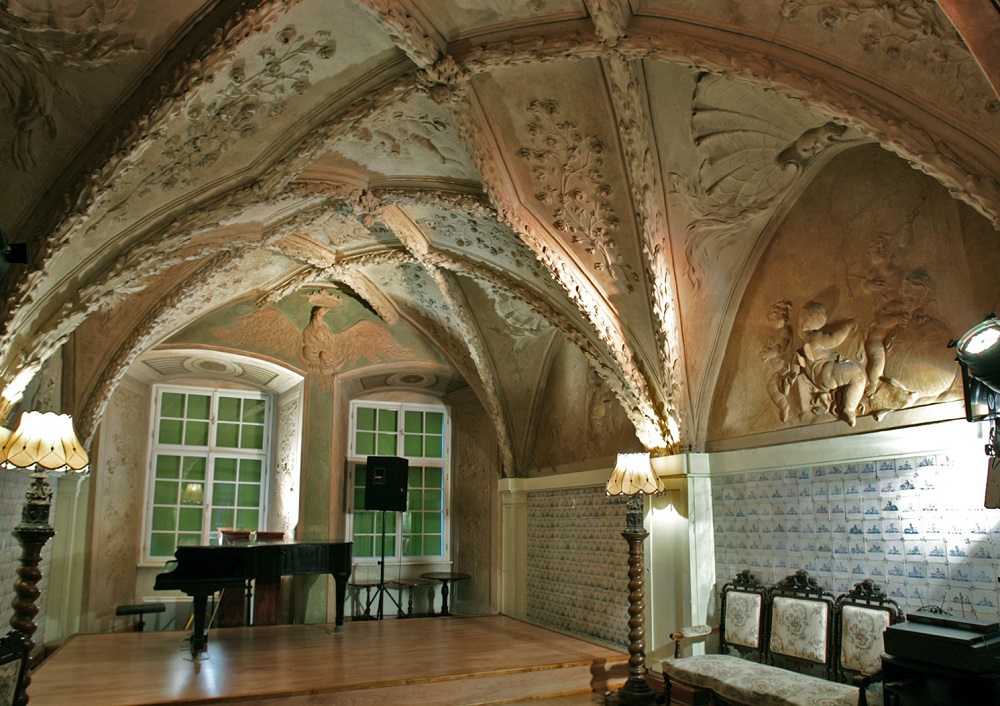 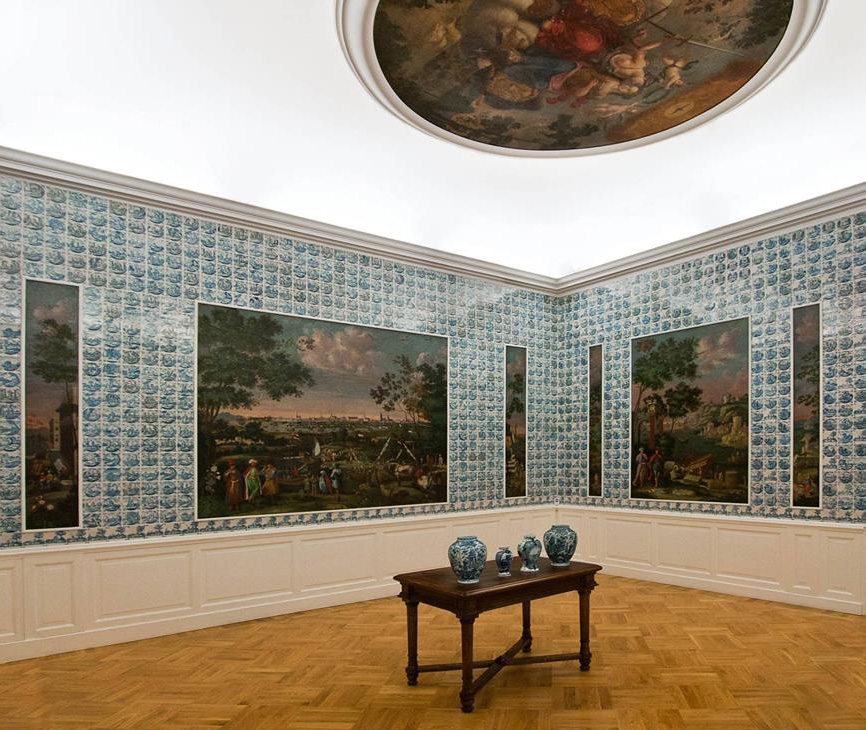 7. Wrocław (Breslau), The Beyersdorfs’ Room in the former Royal Palace

This room in what is now Wrocław municipal museum has around 2,000 eighteenth-century tiles from various Dutch and Frisian workshops. The room was originally part of the rich patrician house in Blücherplatz, from where it was moved to its present location in 1898.

This room in a former palace of a linen magnate, now a luxury hotel, is embellished with shepherd, landscape, and biblical tiles, made in Amsterdam, c. 1740-1760. 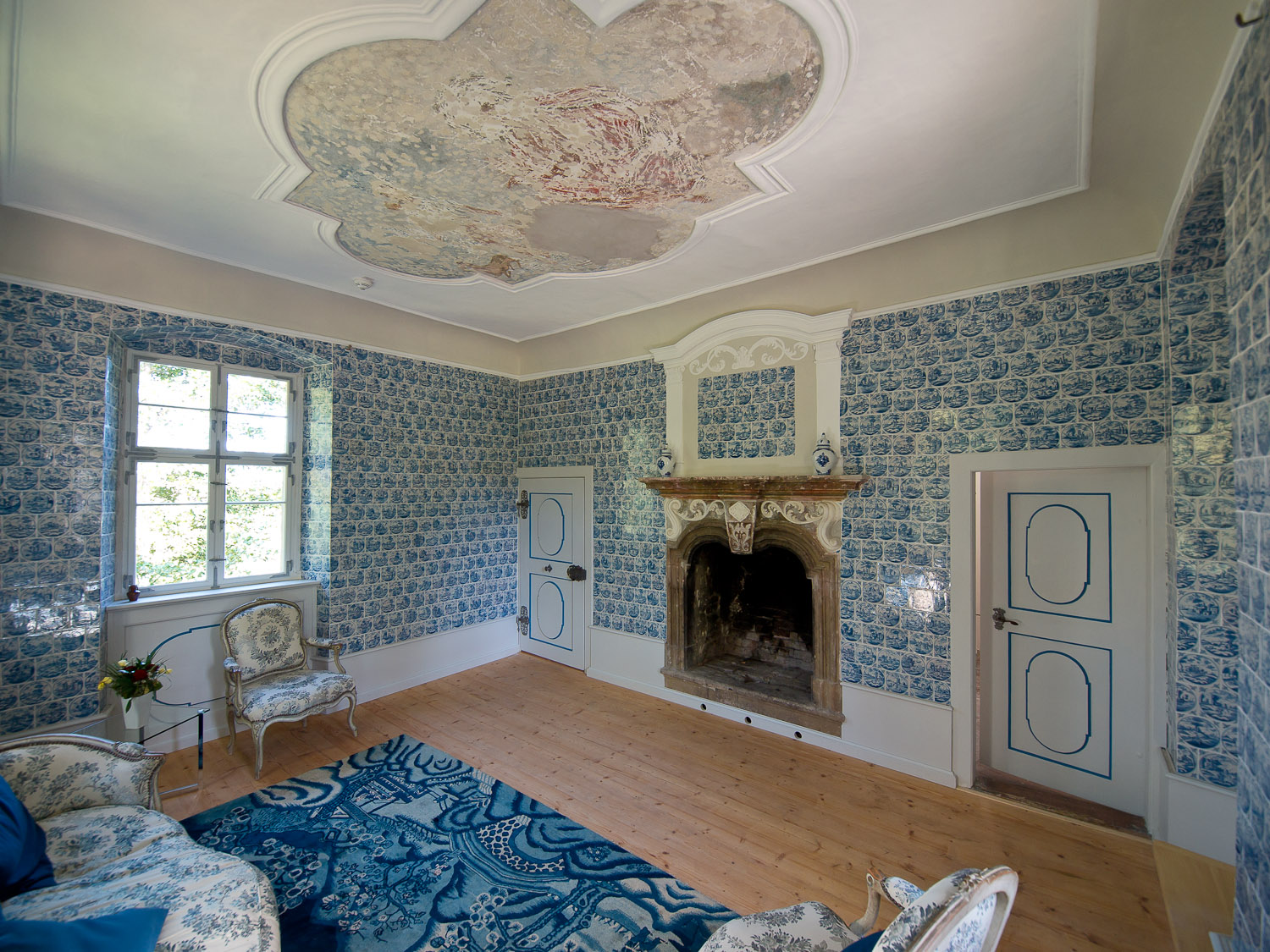 Tiled room in the palace at Pakoszów. Photograph by Christopher Jan Schmidt

This former palace is now used as a school. Two interiors are decorated with tiles: the hall (shepherd, landscape, and biblical tiles, Utrecht, c. 1730-1750) and a former dining-room, now staff room (miscellaneous tiles, primarily made in Makkum, c. 1730). 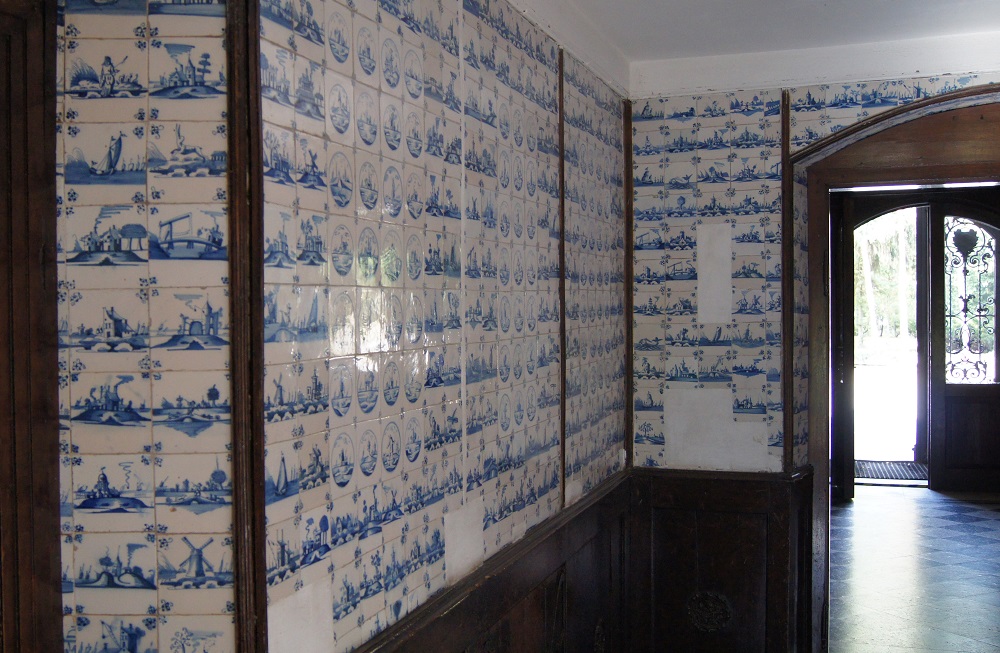 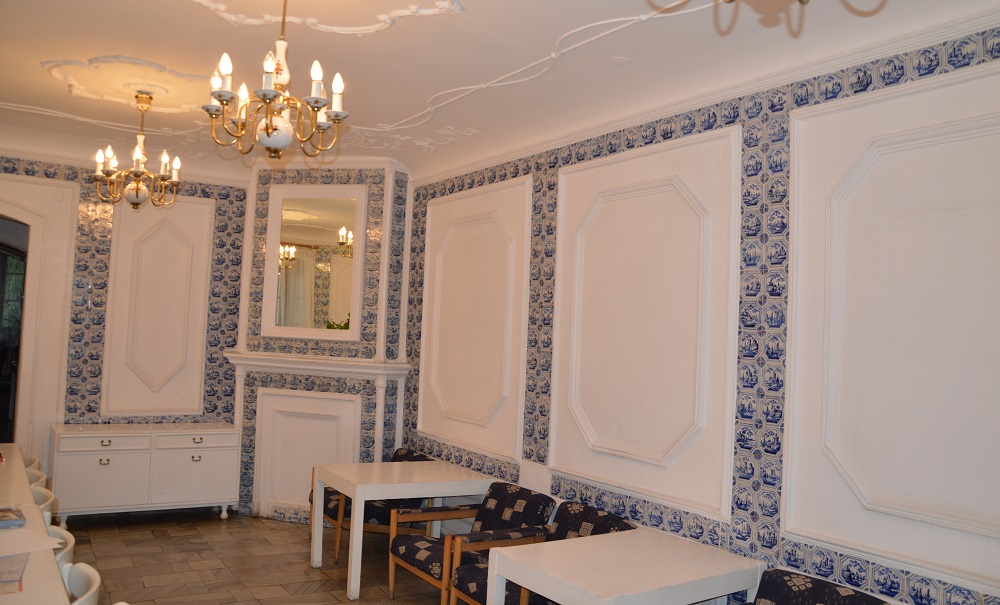 10. Większyce (Wiegeschütz), kitchen in the basement of a palace dating from 1871. 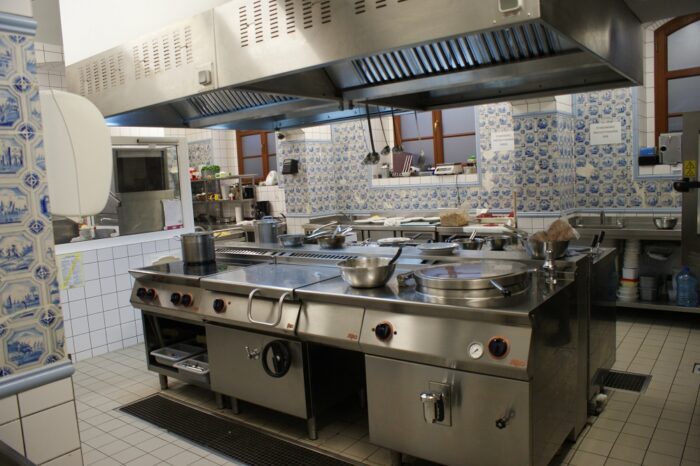 This kitchen is now part of a hotel restaurant (the tiles originate from the workshop of Jan van Hulst, Harlingen, c. 1890).

The kitchen interior in Większyce exemplifies the nineteenth-century historical revival that rekindled interest in Dutch tiles all over Europe, especially in Germany. The former library of the palace in Mosty (Speck), Pomerania (tiles from Makkum, Tichelaar’s workshop, c. 1900) is another example. It should also be noted that a factory in Nieborów produced an abundance of imitation Dutch tiles and delftware at the end of the nineteenth century.

Gdańsk presents us with an unparalleled phenomenon. With its characteristic architecture and its close cultural and commercial ties with the Low Countries, Gdańsk became almost a Netherlandish city in the former Polish-Lithuanian Commonwealth. It also served as the gateway through which Dutch tiles were imported to this part of Central Europe. It is estimated that at least six million tiles were transported to Gdańsk in the seventeenth and eighteenth centuries. From archival inventories, drawings, and etchings, we know of at least twenty Dutch-tiled interiors. The real number is undoubtedly much larger. With the destruction of the old city centre of Gdańsk at the end of the Second World War, these magnificent rooms were also destroyed. Today only seven tiled interiors survive in Gdańsk, in the form of reconstructions, using historical tiles or  modern replacements. 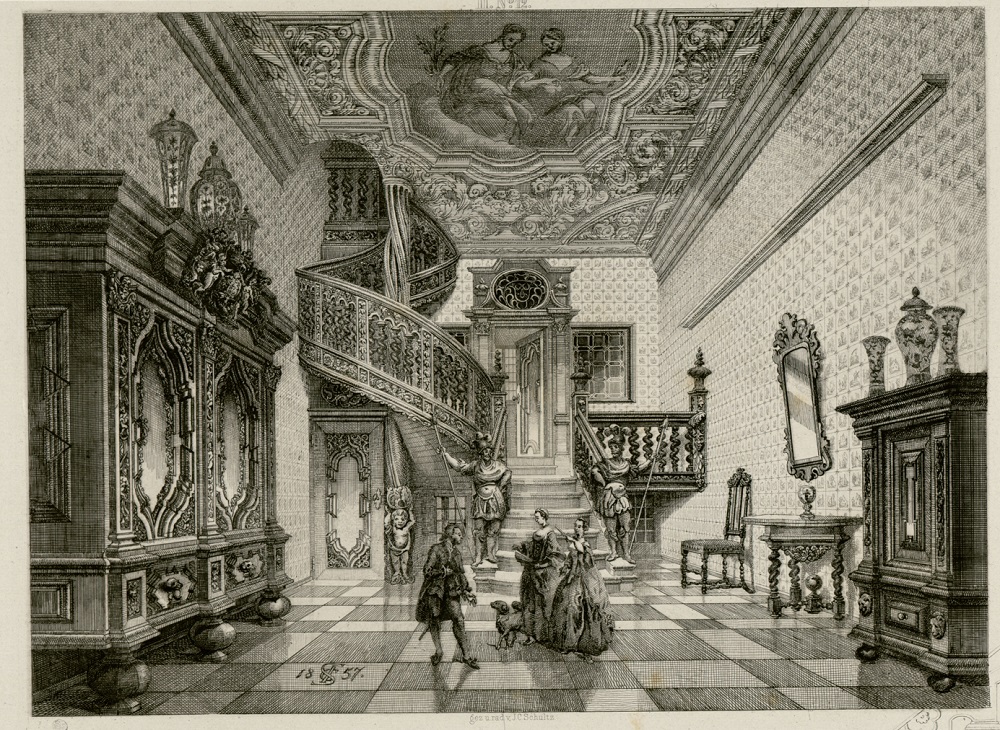 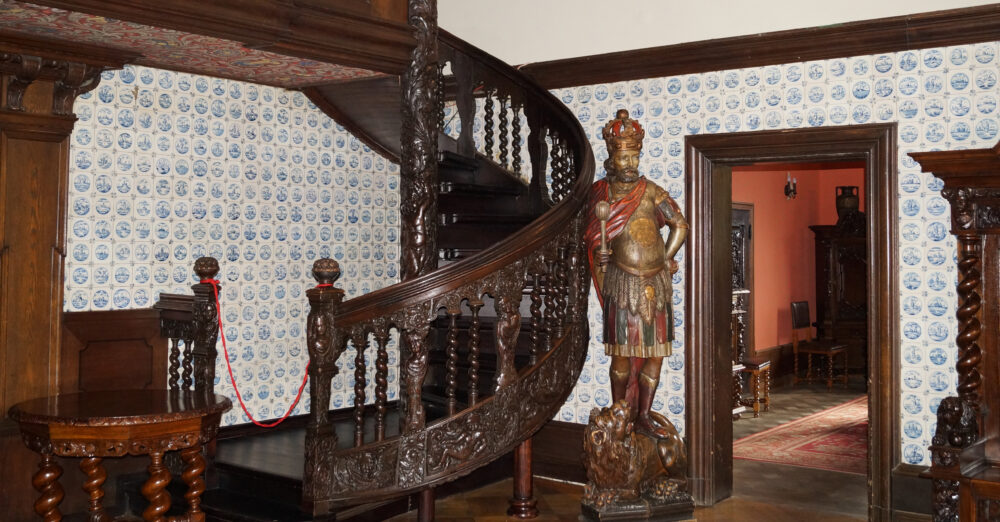 Hall in Gdańsk’s old town hall. This interior was constructed in 1912-1914, using tiles from patrician houses around the city. Photograph by Iwona Berent

House in Żuławki. Two images juxtaposed to show that the interior was originally a single room. Photographs by Stanisław Oczko

This is another fascinating region for the study of Dutch tiles in present-day Poland. Located in the delta area of the Vistula River, Żuławy Wiślane was colonized by the Dutch Mennonites from the sixteenth century onwards. These immigrants, specialists in water engineering, transformed their new motherland into a near-replica of Holland, complete with polders, dykes, and windmills. Many of the beautiful arcade houses (Vorlaubenhäuser) of their descendants were richly decorated with Dutch tiles. Only two such interiors survive to this day, both damaged and greatly modified. They are located in the village of Żuławki (Fürstenwerder). The photograph below shows the remains of a typical interior of one of these houses (now divided into two rooms, with landscape tiles from Utrecht, c. 1730, and rare landscape and genre tiles from Amsterdam, c. 1770).

13. Sink in the castle of the Teutonic Knights in Malbork (Marienburg). 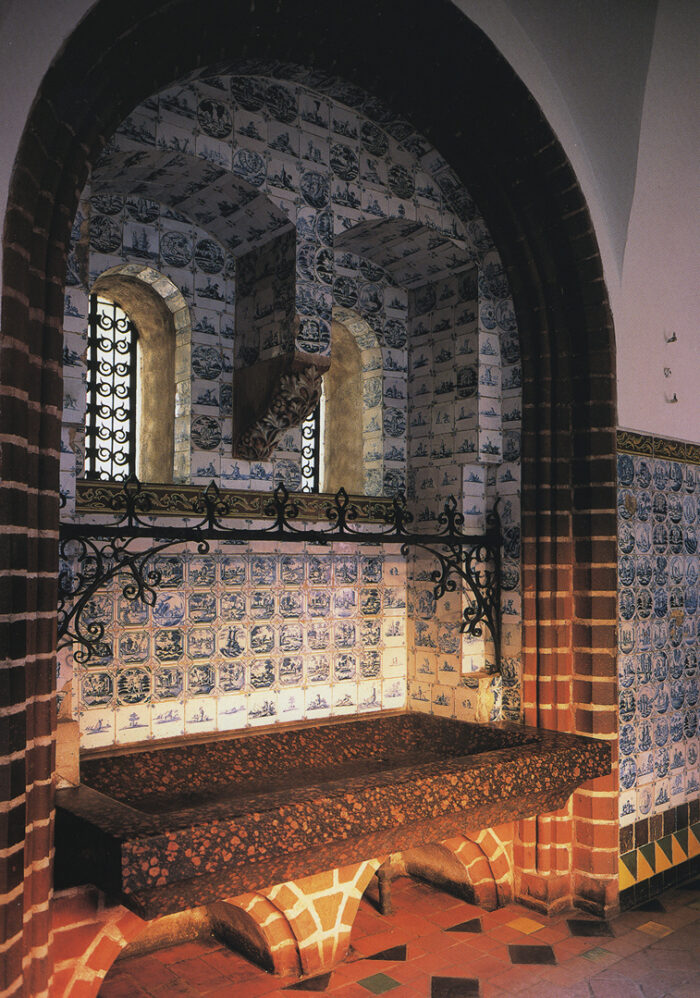 Sink in the castle in Malbork. Photograph from the archives of Piotr Oczko

This is an extraordinary example. The sink is a mock-medieval structure, a fantasy conceived by Conrad Steinbrecht, an avid restorer of historic buildings in the late nineteenth century. It was made of some 600 Dutch tiles of various kinds, purchased from an antiquarian in Gdańsk. The diversity of these ceramic objects, which range in date from the seventeenth to the late eighteenth century, provides a wealth of information about the importation of Dutch tiles into the territory that is now Poland.

Dutch tiles are also found in Polish museums, where the largest  and most important  collections are in the National Museum in Gdańsk, the Museum of Archaeology and History in Elbląg, and the District Museum in Toruń. The National Maritime in Gdańsk and the Museum of Architecture in Wrocław also boast some rare pieces, as do other institutions and private Polish collections.

The above overview presents only a limited selection of the Dutch tiles that can be seen in Poland. A much more wide-ranging discussion, including interiors that are less well known, will be the subject of the forthcoming book by Piotr Oczko and Jan Pluis, to be published by the Malbork Castle Museum. The book will also examine the historical contexts, and matters of attribution and dating, in more depth.

Piotr Oczko is a Associate Professor at the Department of International Polish Studies at the Centre for Advanced Studies in the Humanities at the Jagiellonian University. He has been an associate member of CODART since 2013.

Jan Pluis is a leading documentalist and researcher of Dutch tiles.