This article was originally published in the CODART eZine, no.8 Autumn 2016. 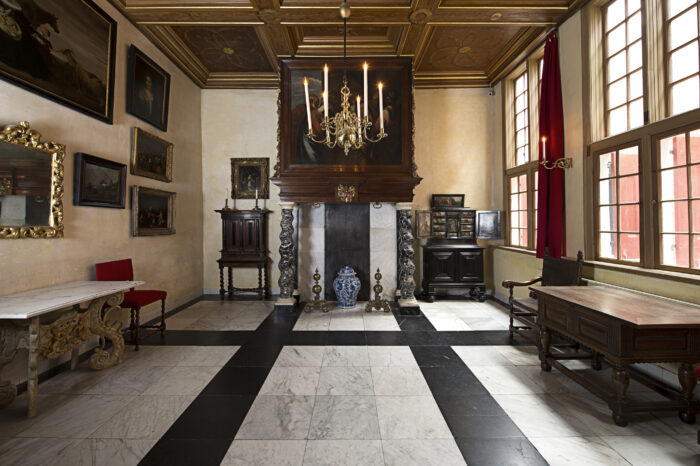 Although many museums are located in historic buildings, there are few that see the edifice itself as the most important object in their collection. In the case of Museum Ons’ Lieve Heer op Solder (Our Lord in the Attic) in Amsterdam, where Thijs Boers was appointed as “curator of the building” in 2006, this is indeed the case. The decision to classify the building as an object led to interesting choices in its restoration and the addition of a new annex, altogether a fifteen-year operation that was completed last year under the supervision of conservation architect Frederik Franken. The historic complex consists of the seventeenth-century canal house with two smaller dwellings behind it, overlooking the adjacent alley, the high point – literally – being a seventeenth-century Catholic attic church. From the crowded red light district in the oldest part of Amsterdam, visitors enter the sleek white interior of a new building, designed by Felix Claus, which contains all the museum’s amenities. An underground passage beneath the alley leads to the staircase in the historic building, which visitors can only ascend after putting on protective slippers. Then they set off on a tour of the rooms of the historic premises, a trip through time, from the seventeenth-century Sael with its original yellowish stucco, the room in which the first priest Petrus Parmentier worked and slept, right up to the attic church, which, with its woodwork painted in cardinal purple and rush mats, looks today as it did around 1860, the last period in which the church was still used as such.

When Thijs Boers and Judikje Kiers took up their positions at Museum Ons’ Lieve Heer op Solder, they encountered a historic edifice with aspirations to be an art museum. In the rear annex was a picture gallery, and art exhibitions were frequently organized throughout the complex. Although questions were raised as to the museum’s precise identity, there was not as yet any active quest for answers.

A building as a museum object. When was that idea first proposed? 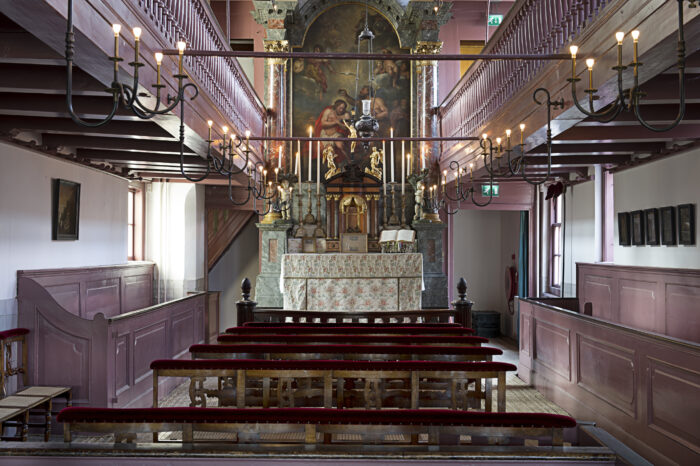 Judikje Kiers: “When I accepted this appointment I considered it important to raise the museum’s national and international profile. Given my own background in education, I was eager to connect with students. Another preoccupation was: “What does the public want?” We developed a mission, or vision, that revolved around the nucleus of this site: keeping alive the memory of Amsterdam’s Roman Catholic heritage. We would reach out to the public by forging links with today’s world.”

Thijs Boers: “This clear course soon boosted visitor numbers. So much so that the museum’s success endangered the structure – the influx of visitors exacerbated the existing wear and tear. It became increasingly clear to us that this building is our Night Watch – a unique object that attracts visitors, but also an object that must be treated with great care.”

JK: “Together with the Cultural Heritage Agency we conducted research to establish how many visitors were acceptable if we were to deal responsibly with our greatest asset. This study culminated in a risk analysis in which we carefully determined the core values of our collection in terms of immovable property and hence the risks of a diminution of value. This enabled us to formulate the core values of our museum. Appointing Thijs as “curator of the building” was the logical next step.

TB: “Another thing that helped us to determine the building’s value was an architectural historical study, including a color-historical study. These studies adopted an integrated approach to the entire building and enabled us to formulate the four core values of the museum.”

What are those four core values? And how did they help to shape your ideas?

JK: “Authenticity (every part of the building is really old), active experience (we did not want to place the building under a bell jar), historical value, and social value. Throughout the process we always kept these values in mind. We decided to jettison everything that did not belong or that was not necessary: we cherished authenticity and gave priority to active experience.”

TB: “This brought into even sharper focus that the building was our most important museum object. Clearly, then, we would need other premises in which to install the necessary amenities. Also, making the building our central concern raised a new question: who lived there?” 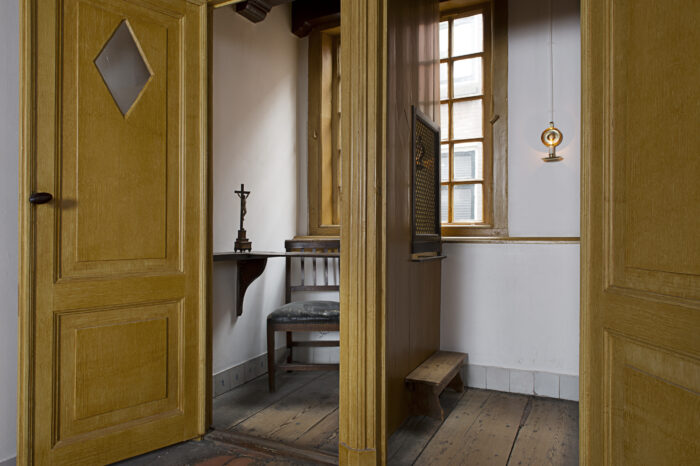 JK: “Exactly – every choice we made raised new questions and opened up new areas of enquiry. Sometimes we found new information in the archives, such as the reference to rush mats in the church accounts. Sometimes new information emerged from the complex itself, such as an original door that had been used in the construction of a little loft in our cycle shed. Another discovery was an extremely large cesspit with revealing contents from the years 1700-1775, when the complex backed onto a beer house. This enabled us to tell a much richer story. We also conducted a number of visitor studies to identify, for instance, the items that attracted most attention. We found that the confessional was a focal point: people would begin to talk to each other here about their own memories of confession. Here again we saw that active experience was a core value of our museum. Furthermore, all these personal stories made their own contribution to the collection.

TB: “Of course we thought about that: how can we revive the experiences of that time? Before people pass out of the new building with its modern facilities into the  ‘museum object,’ we ask them to put on slippers. Besides serving to protect the historic floors and rush mats in the church, this rite de passage also sharpens visitors’ sense of awareness, prompting them to ask ‘what is this place I am visiting?’”

JK: “The most important object in our collection is the house with the attic church. Taking that as our core value made it much easier for us to focus on projects that would truly enhance the house and the church. We scarcely made any purchases and did not allow ourselves to be tempted to launch projects that did not fit with these core values.”

With today’s hindsight, would you do anything differently? 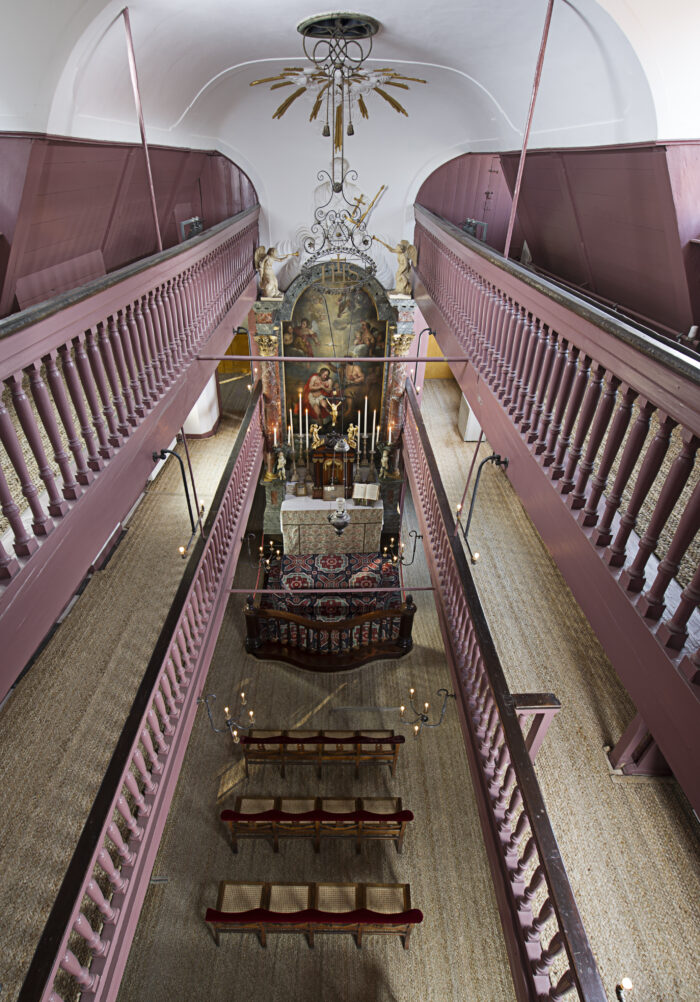 JK: “One important lesson that we learned was to keep weighing different options consistently. For instance, we deliberated endlessly about whether or not to use the rush mats, which do an immense amount to boost the core value of ‘active experience,’ but which require a great deal of maintenance and present a high risk of attracting moths. That is just one example: we all have to ensure that we and our colleagues stay sharp, that we check all the risks whenever we get enthusiastic about something. I think that we did weigh all those decisions carefully. So to answer your question – no, in hindsight, I would not do anything differently.”

A partnership between museum director, curator, and conservation architect. That must sometimes have led to heated debate. 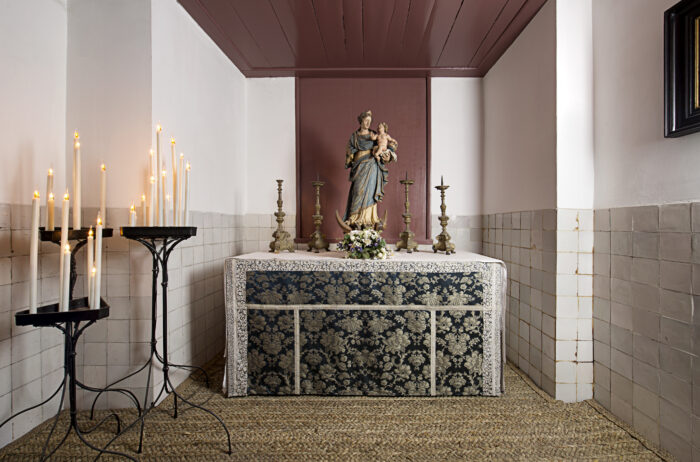 JK: “There was one thing about which we all agreed: there was no self-interest involved. All our work was in the service of the building and we must be faithful to that cause. Even so, we had to make a number of concessions. For instance, we thought it was a great pity that we were not allowed to use white lead any more. This meant that titanium white had to be used in the cardinal purple in the church instead of the authentic dye mixture. White lead is poisonous and prohibited, but it should be possible to obtain an exemption for situations like this. Yes, we did have a great many discussions; we deliberated for a long time, for instance, about the restoration of the staircase and the re-partitioning of the church floor. But we always succeeded in reaching agreement and as a team we are all proud of the result.”

TB: “We learned a lot from looking at other, similar projects and solutions. The fact that the original front door of the Rembrandt House is now closed led us to decide that our front door must be open. In Dennis Severs’ House in London we saw the gas lighting and candles. We also saw the rush mats, which are still made by hand in England, in a number of country houses, such as Hardwick Hall. When we visited Sir John Soane’s Museum, we were struck by the amount of love and attention to detail that could be lavished on the interior and the maintenance of a house. 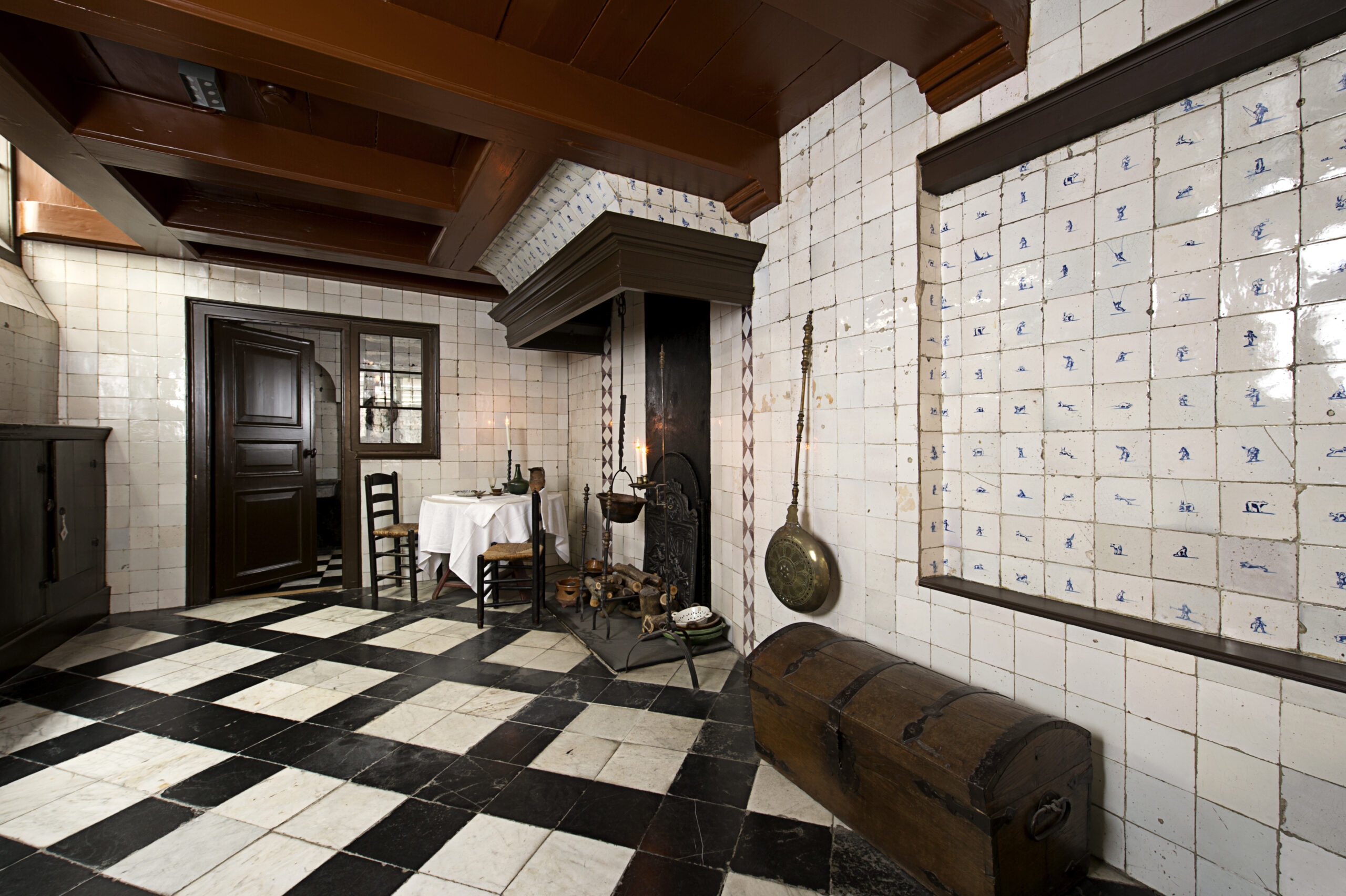 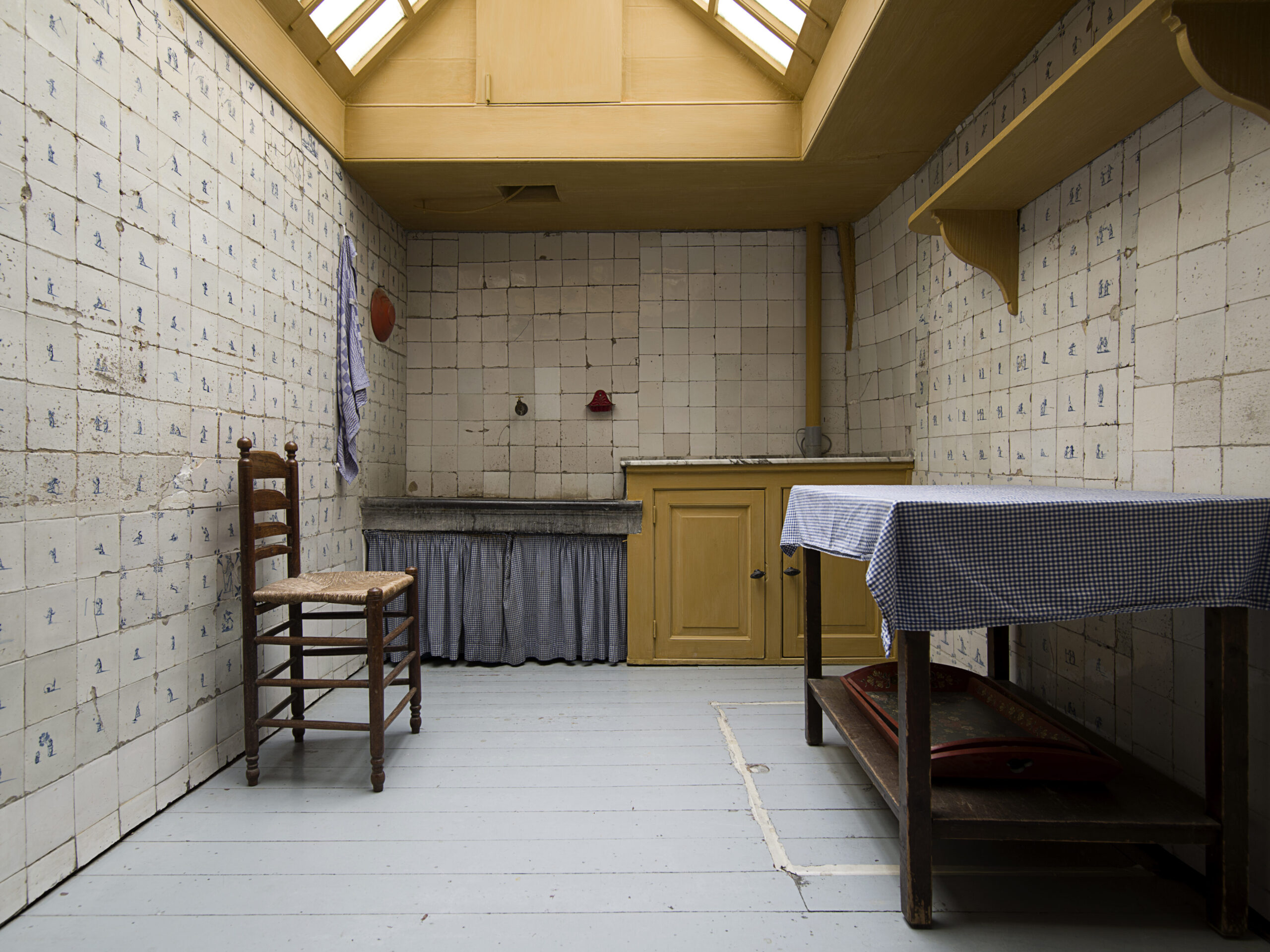 Of course we had discussions, but we were always able to resolve our differences. What mattered most to me was our relationship with the public. As an academic, I was always asking the question: can we provide firm evidence? The architect was less concerned with such issues, and focused primarily on the materials. But together we were successful: now you pass from a new building, with all the necessary facilities, into what is literally and figuratively a completely different world.”

Judikje Kiers served as director of Museum Ons’ Lieve Heer op Solder from 2001 to 2016. At the end of 2009 she was also appointed director of the Biblical Museum / Cromhout House. On 1 March 2016 she became director of the Amsterdam Museum.

Thijs Boers held a variety of positions at Museum Ons’ Lieve Heer op Solder from 2001 to 2013. In 2006 he was appointed curator of the buildings. Since 2013 he has been curator of the Amsterdam Heritage Museums, which includes the Amsterdam Museum and the Biblical Museum / Cromhout House in addition to Museum Ons’ Lieve Heer op Solder. Thijs Boers became a CODART member in 2016.

Michiel Franken is Curator Technical Documentation/ Rembrandt and Rembrandt school at the RKD (Netherlands Institute for Art History). He has been a member of CODART since 2007.

Gerdien Verschoor was Director of CODART until March 2019.