Visit to the Detroit Institute of Arts (DIA)

This article was originally published in the CODART eZine, no. 7 Winter 2015.

The one-week study trip took us from Detroit to Chicago. It was brilliantly organised: we visited the Detroit Institute of Arts, the Toledo Museum of Art, the Allen Memorial Art Museum Oberlin including the Weltzheimer / Johnson House by Frank Lloyd Wright, the Cleveland Museum of Art, the Dayton Art Institute, the Taft Museum of Art (Cincinnati), the Cincinnati Art Museum, the Indianapolis Museum of Art and the Art Institute of Chicago. While in Detroit, we also saw three impressive private collections. Some participants took advantage of the optional programme that included both an exclusive preview of the exhibition Class Distinctions: Dutch Painting in the Age of Rembrandt and Vermeer in the Museum of Fine Arts in Boston under the guidance of Ronni Baer and a private visit to the Maida and George Abrams collection of drawings.

The group was made up of curators and directors of museums in the Netherlands, Belgium, Germany, Finland and the US, a curator of the Netherlands Institute for Art History (RKD) and patrons of CODART, including above all collectors and art dealers from Belgium, the Netherlands, France and the US. The range of nationalities and professions within the group gave rise to exciting and inspiring conversations and viewpoints on art works and museums. 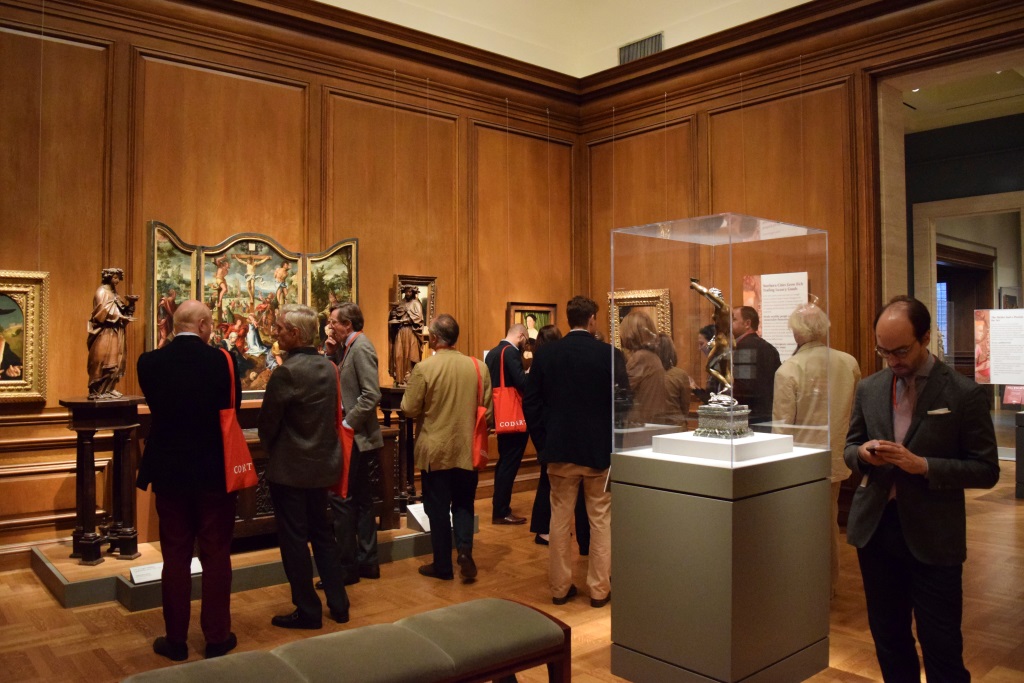 Visit to the Detroit Institute of Arts (DIA) 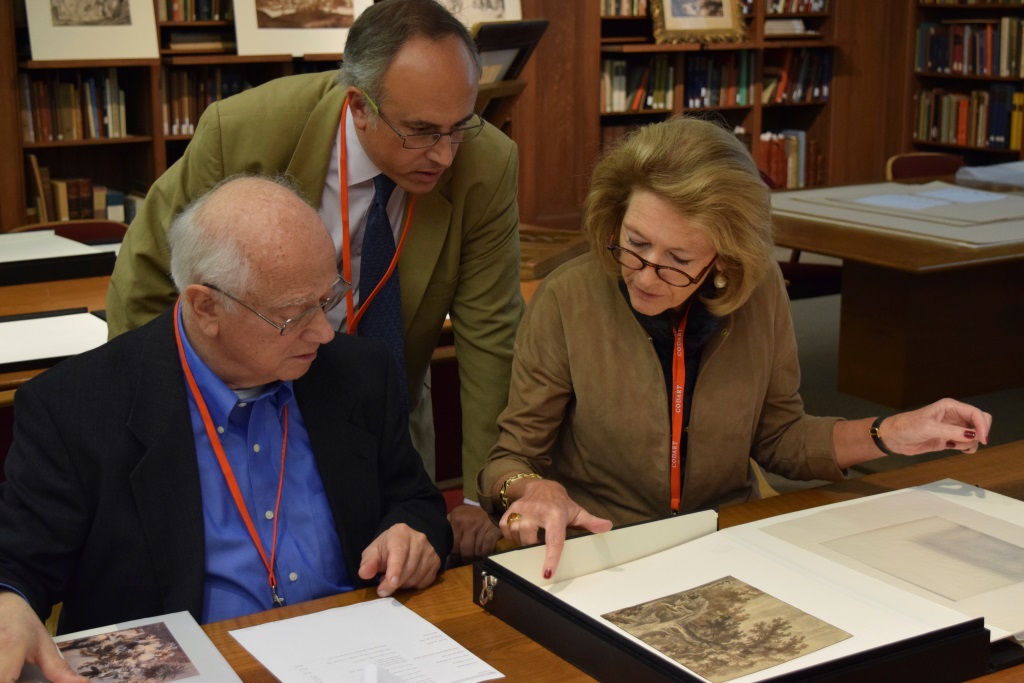 The art of the Netherlands was the main focal point in all the museums. The Midwest region does not generally come into the “must-see” category in terms of art history, yet it includes a number of world-class museums as well as smaller museums with interesting collections. George Keyes, former curator for European art at the Detroit Art Institute, prepared the programme. Keyes, recently retired from his former position, accompanied us on the tour, introduced us to the highlights and gave us significant insights into the history of the individual museums’ collections. He also explained how they relate to the history of companies in Detroit, Cincinnati and Indianapolis and the entrepreneurial families – Ford, Lily and Taft –, who are directly linked to the collections from which the museums evolved. The CODART group was welcomed to every museum by the curators, who without exception prepared one or more “behind the scenes” visits. They had also encouraged the study trip participants to submit any personal requests beforehand, enabling many participants to study particular works of art for exhibitions, loans, or research.

We were particularly impressed by the restoration studios in Detroit, Cincinnati and Indianapolis, which are excellently equipped, and the degree to which they are focused on visitors. Top-quality extensions and new acquisitions are carried out in the US thanks to the support of donors. In this land of museums supported by private foundations, state and city museums are the exceptions.

In the Detroit Institute of Arts we were impressed by the way a museum carefully modelled on the Bode Museum in Berlin had been established on the American continent; this second museum still closely resembles its model in the cultural and historical presentation of its collection: paintings, sculpture and decorative arts from a single region and era are presented as a whole; for example, medieval South German art or the art of 15th- and 16th-century Florence. This was achieved by the German-born art historian Wilhelm Reinhold Valentiner (Karlsruhe 1880 –New York 1958), who is known in the US as William R. Valentiner. He was a pupil of Cornelis Hofstede de Groot and assistant to Wilhelm von Bode at the then Kaiser Friedrich Museum, later the Bode Museum in Berlin. 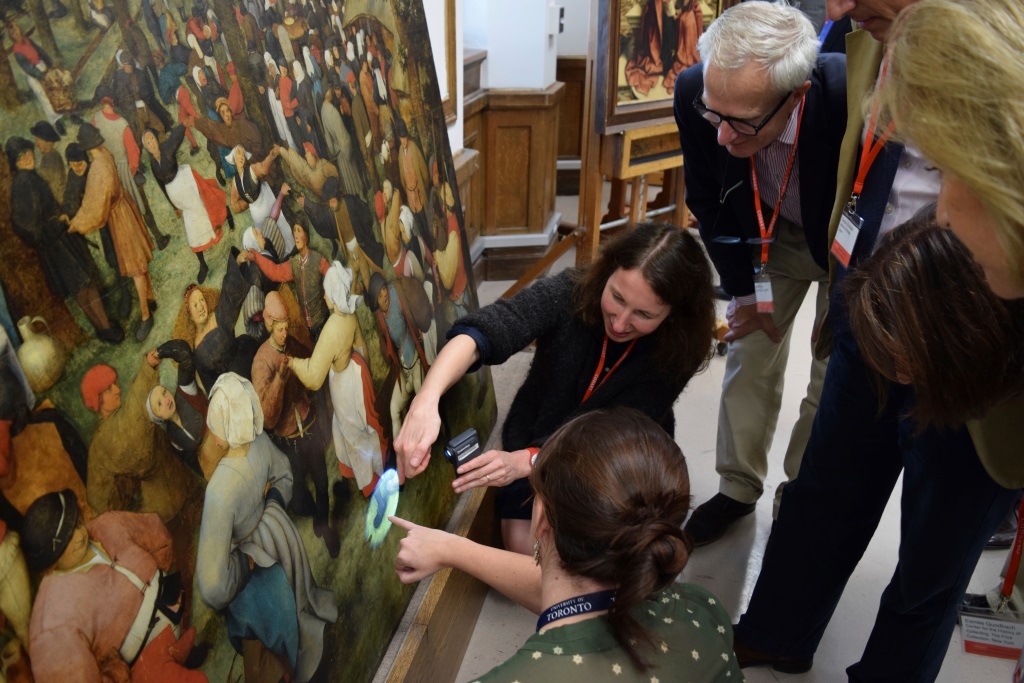 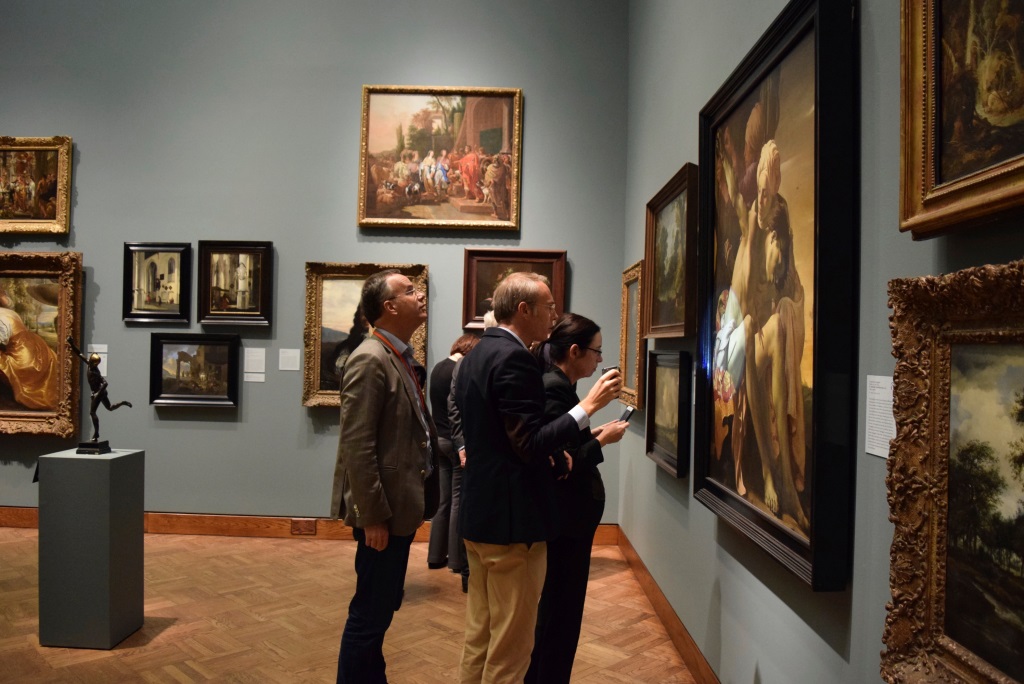 The Institute of Arts was previously owned by the city but has recently been privatised. It is now run by a body in which the museum is a co-partner: it is a beacon in the bankrupt, dilapidated city of which large swathes are unpopulated. Fortunately, the museum is now supported by a range of friends’ associations which promote a range of different genres of art and types of collection. We had the great privilege of being welcomed by the recently appointed director Dr Salvador Salort-Pons, curator Yao-Fen You, the trustees and the European Paintings Council, which support the museum financially. The museum permitted us access to the conservation rooms, which gave us the chance to study The Wedding Dance by Pieter Bruegel I under the best possible conditions.

Other highlights of the journey included the museums in Toledo, Cleveland, Cincinnati and Chicago; we were fascinated by the outstanding quality and superb presentation of their collections. But the smaller museums also had interesting works of art to offer. In Dayton and Oberlin, some Dutch and Flemish treasures were prepared for study purposes by Aimee Marcereau DeGalan (Dayton) and Andria Derstine and Andaleeb Banta (Oberlin).

In Toledo, the group was treated to a very good introduction by Larry Nichols, who also prepared a special view of the Salamanca Triptych by Jan Gossaert and the Morrison Triptych.

The Cleveland Museum of Art was officially founded in 1916. The basis of the collection was formed by donations from collectors from the 1880s onwards, including the donation by James Jackson Jarves to his wife Delia Holden. One of the founder members, John L. Severance, collected European paintings. The impressive collection of painting from the Netherlands includes works of outstanding quality by Peter Paul Rubens, Frans Hals, Abraham Bloemaert, Govert Flinck, Salomon van Ruysdael, Maarten van Heemskerck, Melchior d’ Hondecoeter and others. Half of the museum’s collection is devoted to works on paper, so the museum curators Dr Heather Lemonedes, Curator of Drawings and Dr Jane Glaubinger, Curator of Prints, put together a large group of the most important works in the art study room for CODART’s visit.

Today, the grand architecture of this museum comprises three structures: the original neoclassical building (1913-1916), comparable with the Kunsthalle in Hamburg; the first extension (1958) by Hayes & Ruth (Cleveland) and finally the elegant wing by Marcel Breuer (1971). The buildings are arranged to enclose a covered courtyard as large as a sports ground; together they form a living museum with a range of functions: the elegant, spacious galleries, depots, education, communication and catering.

The curators of the Cincinnati Art Museum, Julie Aronson and Kristin Spangenberg, gave us access to the Print Room. This museum, elegantly situated on a hill, was influenced by two collectors and personalities, Mary Emory and Mary Hanna. They were both inspired by Charles Taft and his wife’s collecting activities. Their collection is housed in a 19th-century mansion where we heard an introduction by director of collections Lynne Ambrosini. The fine collection was already fully inventoried in 1931 and includes artists from the Barbizon and Hague Schools, outstanding portraits from Britain and Dutch paintings that were among Taft’s earliest acquisitions. The paintings and sculptures are displayed in exquisitely decorated saloons which are both elegant and comfortable. 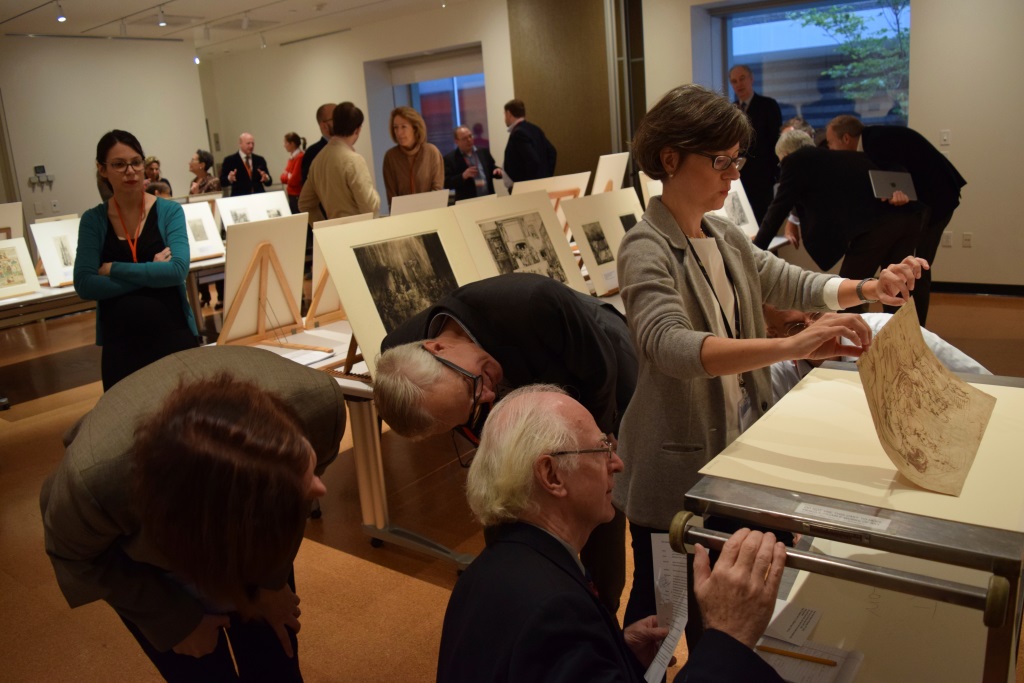 Visit to the Print Room of the Cleveland Museum of Art 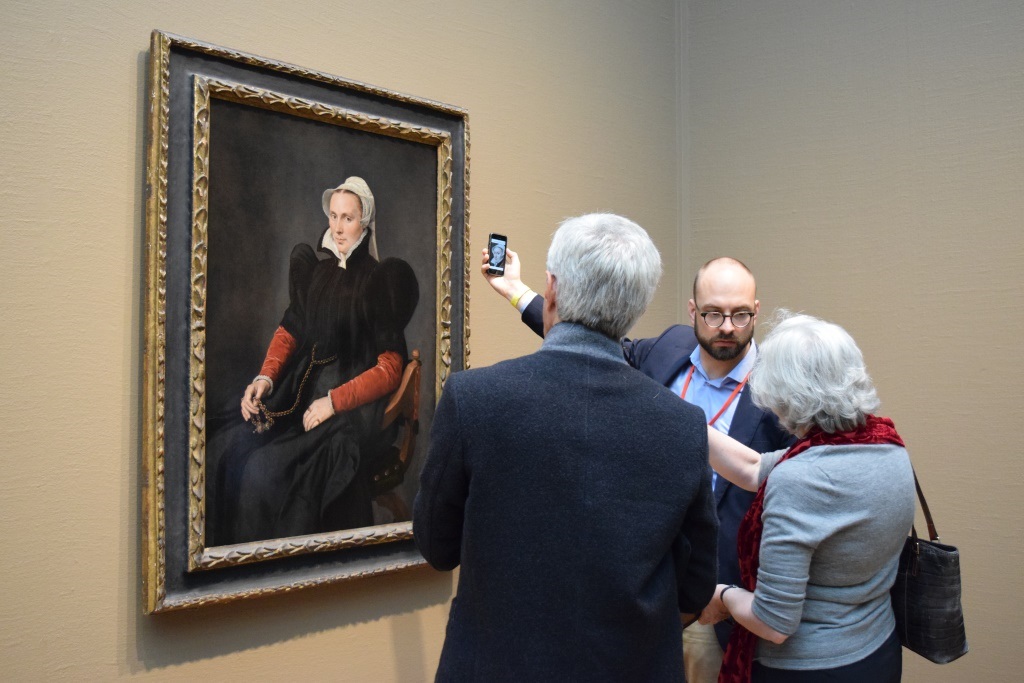 Visit to the Art Institute of Chicago

In Indianapolis, we were received by curator Marty Krause and his colleagues. The museum, which was founded in 1883, is one of the ten oldest and ten largest general art museums in the US. Together with Rebecca Long, former associate curator, we visited the recently reinstalled collection of Dutch and Flemish paintings.

The Art Institute of Chicago was our final destination and the highlight of the trip. In the Prints and Drawings rooms (here in Chicago as elsewhere) the group was shown the very finest works of art, including some by Rembrandt van Rijn and impressive works by anonymous artists, the idea and aim being that we could contribute expert advice to the attribution of these works. The permanent exhibition contains fabulous works, for example still lifes by Pieter Claesz., Frans Snijders and Adriaen van der Spelt. Thanks to our hosts Martha Wolff, Victoria Sancho Lobis and Rebecca Long, we had the great privilege of visiting the museum before opening hours.

The Dutch Consul General, Klaas van der Tempel, invited us to dinner. This was appropriate for CODART and formed a splendid finale to our journey.

To sum up: we were able to study the excellent (in most cases) quality of old European art and its presentation, to admire the extremely professional travel organisation and to enjoy American hospitality – in Detroit, the director and his family greeted us with hospitality from a curry house at the museum entrance. The visit enabled us to put works from our museums into a larger context, giving us new insights concerning works in the collections that we are responsible for. The trip also allowed us to network with museum colleagues about the possibilities of future collaborations, exhibitions, or potential loans. All in all, it was an inspirational and enriching study trip in every way.

We would like to express our warmest gratitude to the CODART team, George Keyes from Detroit, and particularly the CODART donors. Last but not least, our profound thanks go to all the directors and curators of the museums in the Midwest that were included in this itinerary. They opened many doors for us and made this trip extremely worthwhile.

Katharina Bechler is Director at Schloss Philippsruhe, Marstall in Hanau. She has been a member of CODART since 1999.