This article was first published in the CODART eZine, no. 3 Summer 2013

The Omsk Mikhail Aleksandrovich Vrubel Museum holds the largest collection of art in Russia east of the Urals. It consists of both Russian and foreign art, and is housed in two buildings in the city center of Omsk. 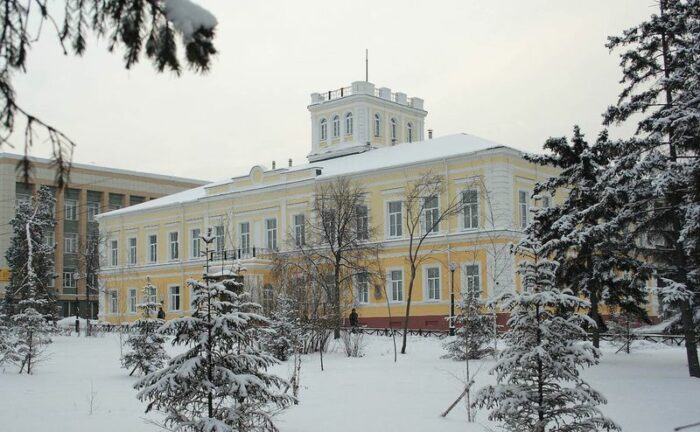 The basis of the collection of the Museum of the Art and Industry College (a forerunner of the present museum) was formed by donations from the Moscow and Leningrad museum fund in 1924-28. F.V. Melekhin, our first director, played a key role in shaping the museum, and it is thanks to his efforts that the holdings of Dutch art were enriched with works from the State Hermitage Museum by Pieter de Grebber, Jan Weenix, Barend Cornelis Koekkoek and others.

Archival research showed that some of those works had previously belonged to such collectors as Princess Elisabeth of Saxe-Altenburg, Konstantin Alexandrovich Gorchakov, Agafon Karlovich Faberge, Arkady Veniaminovich Rumanov and Prince Yusupov. Works have come from a variety of former imperial and aristocratic residences, such as the Marble Palace, Tsarskoye Selo, Oranienbaum and the Constantine Palace. Others arrived from some of the largest museums in Russia, such as the State Hermitage and the Russian Museum. 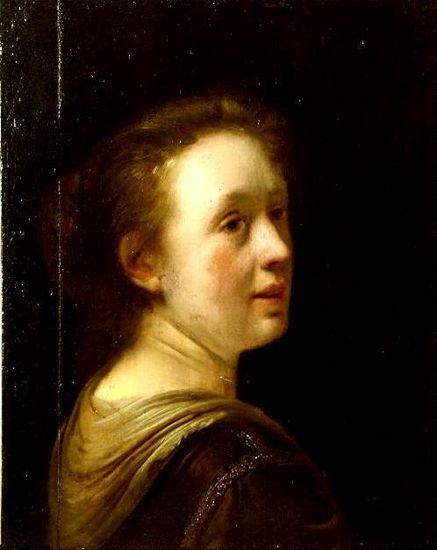 Nowadays the Dutch and Flemish collection numbers more than 80 items, including 43 paintings, 10 works of graphic art and one sculpture by Adriaan de Vries (1545-1626), Hercules, Deianeira and Nessus. There is also a small showing of Delftware and Brussels lace. The works from the collection of Elena Georgiyevna (Helena) of Mecklenburg-Strelitz, the wife of Prince Albert of Saxe-Altenburg, are of particular value. The couple were known in St Petersburg for their charitable works and art collecting. Among the works that they acquired which are now in the museum in Omsk are The Card Players by an anonymous Flemish artist of the seventeenth century working in the style of David Teniers the Younger, Head of a Woman, which arrived as a work by an unknown painter from the school of Rembrandt and is now attributed to Pieter de Grebber, and Still Life with Flowers and a Book by the Belgian painter Jean Baptiste Robie (1821-1910). Other pictures from the collection are A Herd of Animals with a Sleeping Shepherd by Eugène Joseph Verboekhoven (1798-1881) and Landscape with Horsemen attributed to Guillam du Bois (1610-80). 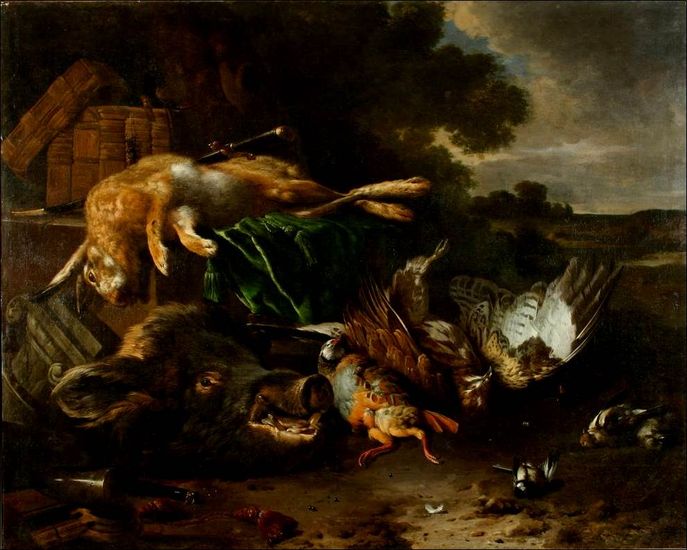 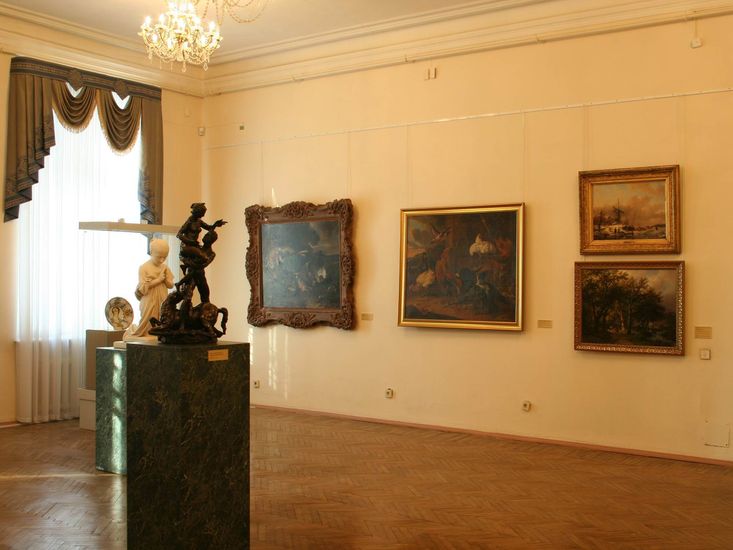 In 1985 the Omsk museum organized an exhibition titled The Western European Still Life. Studying. Restoration. The exhibition and the accompanying catalogue became a template of research activity in the museum. Hunting Trophies (oil on canvas, 100 x 126.5 cm) by Jan Weenix (1642–1719 is a good example of the genre, in which the artist successfully combined his skill in realistically depicting dead game with his talent for decorative compositions. A Bouquet of Flowers (oil on canvas, 86 x 49 cm) by an unknown seventeenth-century Flemish artist, a type of still life traditionally known as a “blompot”, was in the collection of the famous jeweller, collector and antiques expert Agafon Karlovic Faberge (1886–1951) until 1918.

A Village Feast (oil on panel, 51 x 79 cm; c. 1650), which is a copy after David Teniers II (1610–90), was likewise in Faberge’s collection until 1918, as were A Landscape with Figures after Nicolaes Berchem, Ships in a Storm, probably by Hermanus Koekkoek, and Animals in a Stable by Wouter Verschuur.

Flowers and Birds (oil on paper, 38.5 x 25.4 cm) by an unknown Flemish master of the eighteenth or nineteenth century arrived in the collection from the State Hermitage Museum. It is a harmoniously balanced composition in which the painter’s brush skilfully rendered the beauties of the world: the colourful feathers of the birds, the slightly roughened surface of the fruits and their juicy pulp.

In 1927, a panel by an anonymous painter arrived from the Hermitage under the provisional title Scene from the Middle Ages. It attracted attention for its confident handling, which led experts to examine it meticulously. In the course of the study it became clear that the complex, multi-figured composition depicts a scene from the life of King Solomon, and it is now titled The Idolatry of Solomon, with the king worshipping the goddess Astarte. Hypotheses about the identity of the painter were also put forward. The ground, imprimatura, undermodelling and paint layers are all typical of the techniques used by masters in seventeenth-century Flanders. Works in the collections of the State Hermitage Museum in St Petersburg and the Pushkin Museum in Moscow enabled the Omsk picture to be compared with paintings by Frans Francken II (1581–1642), which revealed similarities in stylistic solutions, although obviously it should not be forgotten that one of the most difficult tasks for a researcher of seventeenth-century art is to distinguish between works by the head of a workshop and those by his assistants and pupils. 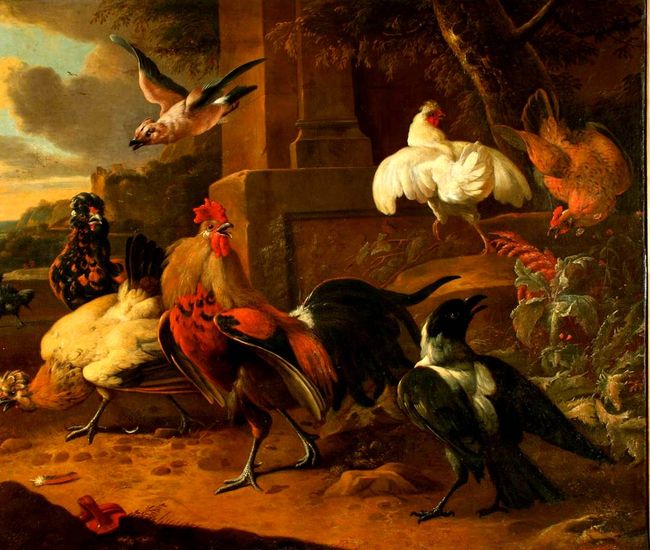 Another imposing work is The Poultry Yard, a copy after Melchior d’Hondecoeter (1636-95; oil on canvas, 109 x 132.5 cm). Examination of the reverse of the canvas revealed that it had belonged to Sofia Aleksandrovna Polovtseva until 1918. She was the daughter of Aleksander Alexandrovich Polovtsev, a member of the State Council of the Russian Empire and chairman of the Imperial Historical Society.

When studying the archives of the State Russian museum it became clear that a number of pictures had belonged to the famous St Petersburg journalist, philanthropist and art collector Arkady Veniaminovich Rumanov (1878-1960) and his wife, the pianist Eugene Lazarevna Rumanova (1883-1939). Among them are The Burning of Troy attributed to Adriaen Lievensz van der Poel (1626-85), a Cityscape by the Antwerp artist Theobald Michau (1676-1765), a history painting Clearing the Dead from the Battlefield tentatively attributed to Frans Francken II (1581-1642), and A Smoker, which is a copy after Teniers.

Peasants Drinking in an Inn by Bartholomeus Molenaer, which can be traced back to the collection of the princes of Yusupov, arrived from the Leningrad office of the State Museum in 1927.

Two paintings that entered the museum in 1983, A Sculptor’s Workshop and A Painter’s Workshop, were in such bad condition that they required urgent restoration. That provided an opportunity to study the works closely. The removal of dirt under a layer of old varnish revealed letters written in ochre-coloured paint and the number 1710, although the last digit was barely legible. The letters spelled out the name “Bosch”, and after consultation with the State Russian museum’s eminent scholar S.V. Rimsky-Korsakov it was confirmed that the pictures were by the Flemish painter Balthasar van den Bossche (1681-1715). His works are also in the Hermitage and Kharkov museums. It is thought that the Omsk paintings were made around 1710, after Van den Bossche had returned home to Antwerp from France. 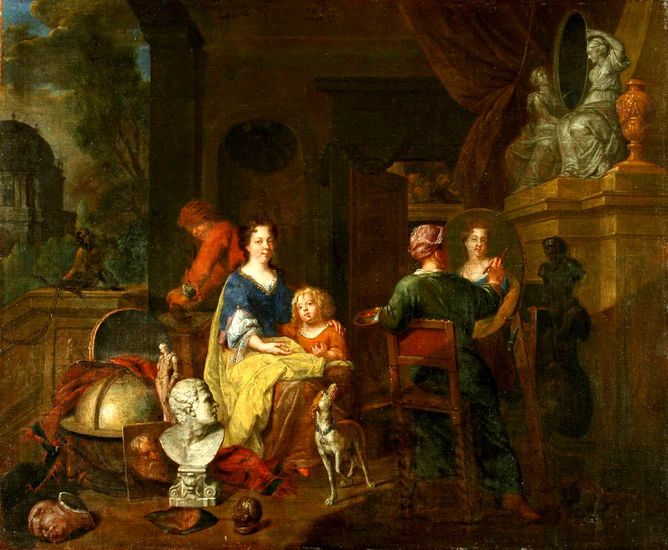 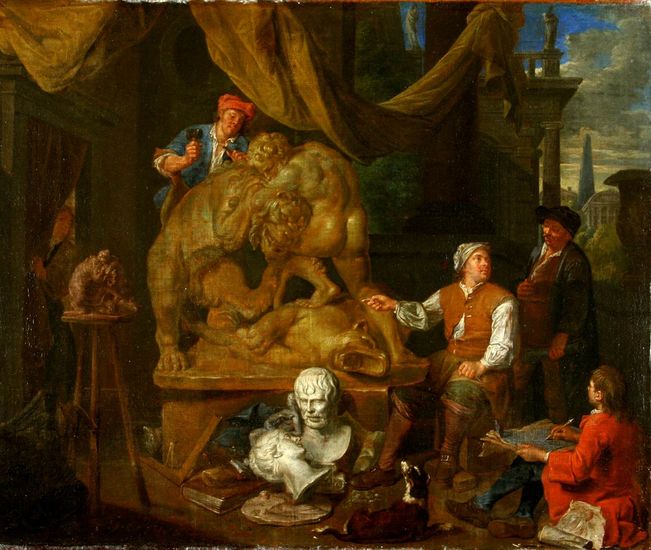 The Omsk museum acquired four rare paintings from the collection of S.P. Sidorov of Moscow, one of which was Landscape with a Peasant Cottage (oil on panel, 29.5 x 38.5 cm) by Jan van Goyen – an early work displaying all the characteristics of that period in the master’s career. The picture had suffered serious damage, most notably traces of deep mechanical deformation at the top. The transfer of the canvas to a panel complicated the attribution. Curators at the Pushkin Museum, Marina Senenko in particular, believe that this landscape is rather rare. The handling of the paint and the general composition are close to Jan van Goyen’s Landscape with a Peasant Cottage of 1631 in the State Hermitage Museum. 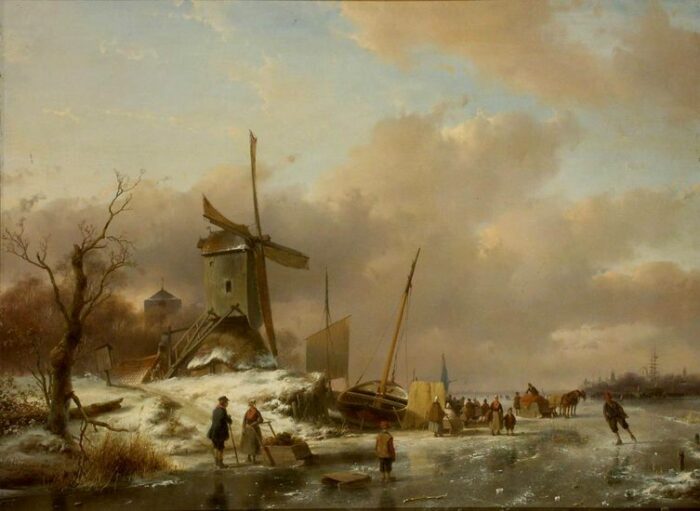 One of the most interesting specimens of Dutch painting is Andreas Schelfhout’s winter View of Dordrecht (1843). It emerged from archival research that until 1920 the painting had been in the collection of Konstantin Aleksandrovich Gorchakov, the son of the famous diplomat and chancellor Alexander Mikhailovich Gorchakov. The artist used the techniques of the Old Masters – painting on panel, applying a silver-grey ground and working with colourful dabs and thin layers – to attain an extraordinary persuasiveness in the depiction of the transparency of the ice and the depth of sky. This is particularly convincing in another winter landscape of his, Winter in Holland (1837), which came from the collection of Prince Felix Felixovich Yusupov, Count Sumarokov-Elston, the grandson of the well-known Russian collector Nikolai Borisovich Yusupov.

In 2002 the Omsk museum and the Novosibirsk art gallery decided to participate in the exhibition Dutch Painting of the XVI-XIX Centuries from the Collections of Siberian Museums, which was organized by the Tomsk art museum with the support of the embassy of the Kingdom of the Netherlands. This enabled us once again to undertake an in-depth study of the collection of Dutch masters in Omsk, small in number but pleasingly diverse, including well-known masters of Dutch painting and pictures that have not yet been attributed. This project led to the publication of Netherlands Painting from Siberian Museums XVI-XIX Centuries: Catalogue of the Exhibition, and the organization of a regional seminar on foreign art of the sixteenth to nineteenth centuries. In 2003, on the initiative of the Omsk museum, this exhibition was shown in Moscow with the assistance of the Moscow Center of Arts (curator M. Loshak).

Study of the collection of Dutch and Flemish paintings proceeds unabated, the paintings are described, provenances are being researched, the sizes and technical details recorded, and a scholarly catalogue is in preparation.

The Dutch and Flemish art of the seventeenth to the nineteenth centuries in the collection of the Omsk Museum of Fine Art consists of unique examples of “minor masters” and is a very interesting selection for further scholarship. When the catalogue is published the works will enter the scholarly realm for the first time and appear in the context of a broader cultural heritage.

Anna Chernyavskaya is Chief curator at The OMSK M.A. Vrubel Museum, Omsk, Russia. She has been a member of CODART since 2012.