The highlights of the Alte Pinakothek in Munich include – in addition to the work of Albrecht Dürer – the paintings by Peter Paul Rubens. This pictorial treasure trove is supplemented by other major works of Flemish Baroque painting. The Bayerische Staatsgemäldesammlungen (Bavarian State Painting Collections) contain, for example, large groups of paintings by Anthony van Dyck, Adriaen Brouwer, Jan Brueghel the Elder and David Teniers the Younger. Not all of these are exhibited in the Alte Pinakothek: numerous Flemish paintings are also on display in branch galleries scattered across Bavaria, particularly at the Residenzschloss in Neuburg an der Donau (Neuburg Palace), which has housed the State Gallery of Flemish Baroque painting since 2005. 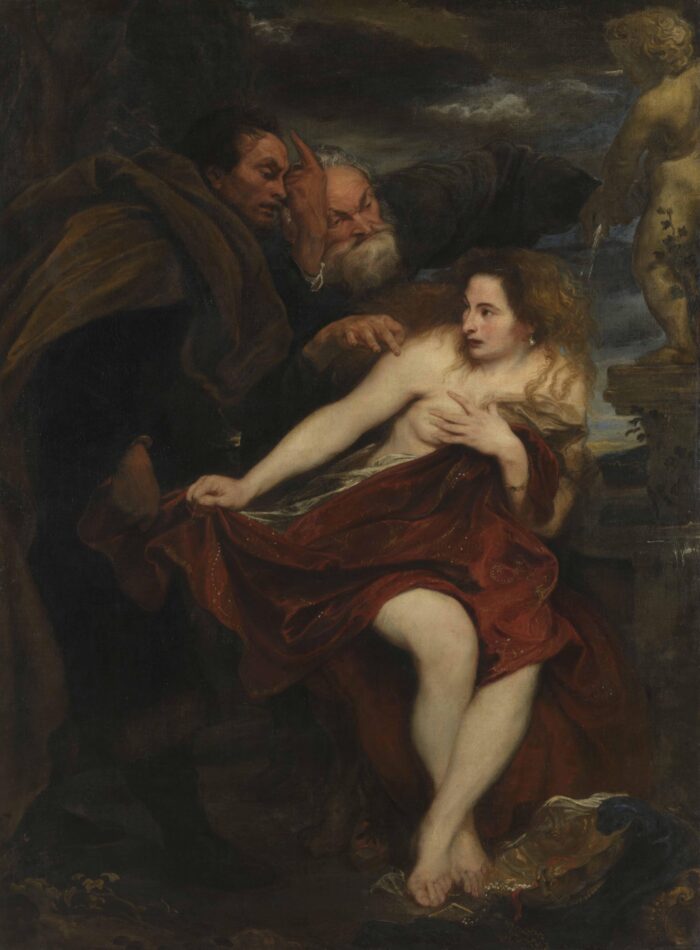 Historic photographs of the Alte Pinakothek document not only the pioneering architecture of the building designed by Leo von Klenze, but also the concept of the original hang, which was replaced – after the damage sustained in the war and the subsequent reconstruction – by a more simple presentation. In contrast to these historically induced changes, the central Rubens Gallery of the Alte Pinakothek is remarkably unchanged: since the museum opened in 1836, The Great Last Judgement by Peter Paul Rubens has been hanging in pride of place, directly opposite the wide arched doorway to the adjoining room, which Klenze designed to allow a more distant view of the monumental painting. Only here can one see the stucco decorations with which the Alte Pinakothek was amply furnished until they were largely destroyed in the war. At the time of the museum’s construction, it had already been decided that this spacious gallery – situated in the middle of the suite of large galleries and thus in the very center of the building – would house the Rubens collection: the works shaped by the Fleming’s long years in Italy were the perfect link between the German and Netherlandish schools, on the one hand, and the Italian, French and Spanish schools, on the other, into which the collection was long divided. Over the years a chronological hang of the works has prevailed (although they are still grouped by artistic landscape), yet those of Rubens have retained their traditional place in the central gallery – an expression of the high esteem in which this focal point of the collection has always been held. 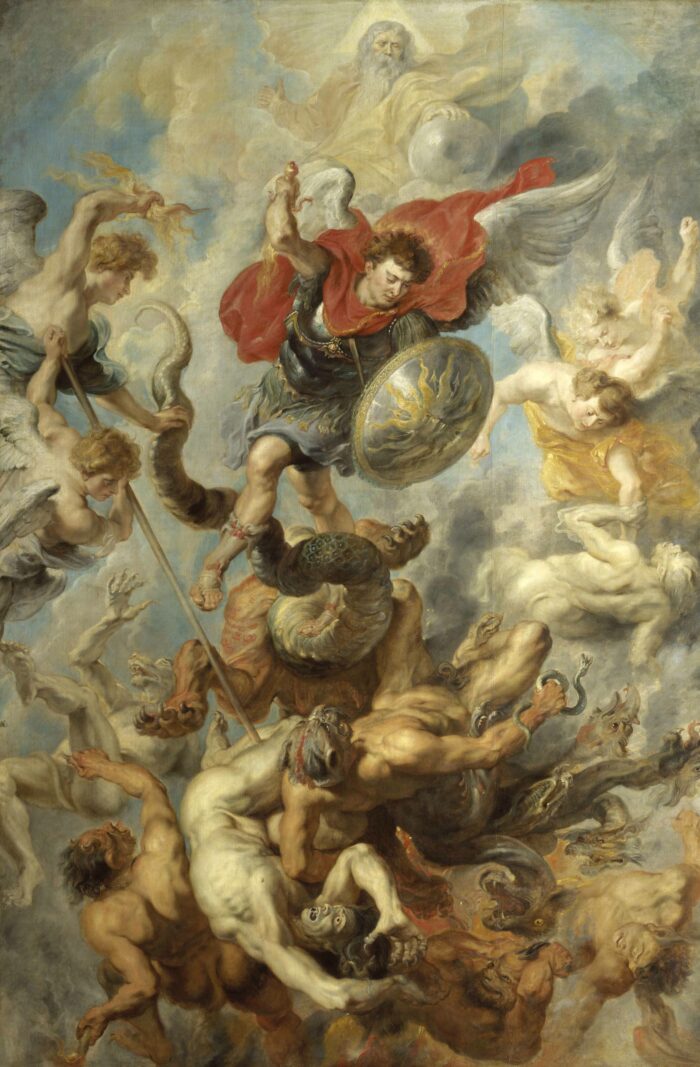 To understand how Munich ended up with such an enormous collection of paintings – the field of Flemish painting alone comprises some 1,200 works – it is necessary to take a brief look at the history of the collection, which goes back to the early sixteenth century. In 1590 Maximilian I (1573–1651) of the Bavarian branch of the House of Wittelsbach ascended to the ducal throne after the abdication of his father, Duke Wilhelm V, and in 1623 he was granted the Electorate of the Palatinate. Maximilian, one of the most important rulers in Germany in the early seventeenth century, was also a passionate collector. In addition to numerous works by Dürer, he acquired Netherlandish paintings, including the Tax Gatherers by Marinus van Reymerswaele, as well as Jonah and the Whale and the Prophecy of Isaiah by Jan Brueghel the Elder. Maximilian approached Peter Paul Rubens directly to commission a cycle of four paintings depicting hunting scenes, intended to decorate the Old Palace of Schleißheim, of which only The Hippopotamus and Crocodile Hunt in Munich has survived. That the busy Rubens accepted the commission in the first place was undoubtedly due to the high regard in which the Elector was held within the Catholic League. As its leader he succeeded in defeating the “Winter King” Frederick V, Elector Palatine and leader of the Protestants, at the Battle of White Mountain in 1620. A reference to that victory is seen in the altarpiece commissioned from Rubens in 1623 by Bishop Veit Adam von Gepeckh for the Cathedral in Freising, near Munich. The Woman of the Apocalypse has traditionally been equated with the church, which wards off its enemies. In this context Mary’s trampling of the snake concretely denotes the victory of the Catholics over the supposedly heretical Protestants, thus making a pointedly Counter-Reformationist statement. In the course of secularization, the painting made its way from Freising Cathedral to the Munich collection.

In view of Maximilian’s great political consequence, it is astonishing that Rubens would have deigned to work for the politically much less important Wolfgang Wilhelm of Pfalz-Neuburg (1578–1653). Wolfgang Wilhelm stemmed from the Palatinate branch (which was then Protestant) of the House of Wittelsbach, which ruled the Palatinate, including some of the territories of the Lower Rhine. Rubens executed no fewer than four altarpieces for Wolfgang Wilhelm, who sought to give visual expression to his support of the re-Catholicization of the duchy. The Great Last Judgement of 1617, which was part of this commission, was intended for the court church at Neuburg, as were the paintings for the side altars flanking it, which display The Adoration of the Shepherds and The Descent of the Holy Spirit, both of 1619. Both of these altarpieces have been hanging since 2005 in the Neuburg State Gallery, which is housed in the palace in Neuburg an der Donau, the paintings’ original home. The fourth altarpiece is The Fall of the Damned, which Rubens painted for Wolfgang Wilhelm around 1621/22. It is not known where it was originally displayed in the residence at Neuburg. Today it is one of the principal works in the large Rubens Gallery in the Alte Pinakothek. 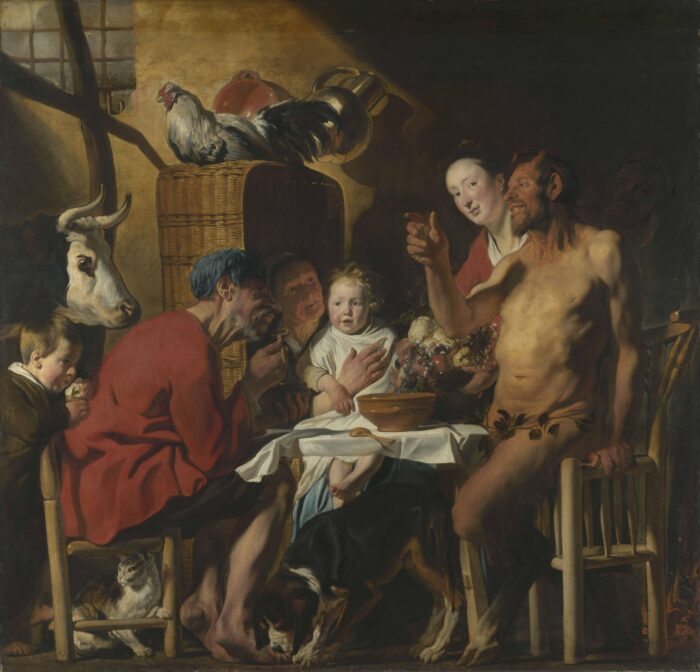 The later history of the four altarpieces made for Neuburg leads us to the next important collecting personality of the House of Wittelsbach: the Elector Johann Wilhelm of Pfalz-Neuburg (1658–1716). This grandson of Wolfgang Wilhelm moved the royal residence from Neuburg to Düsseldorf, which had ended up in the possession of his family when they acquired the duchies on the Lower Rhine. It was allegedly Rubens’s Battle of the Amazons from the collection of Cornelis van der Geest that kindled Johann Wilhelm’s passion for art – a passion that had serious consequences, for in a mere two decades Johann Wilhelm amassed an impressive collection, which he presented not only in the cabinets of his Düsseldorf residence, but also in a specially built Kunsthaus. It was in this gallery that the four altarpieces were exhibited, in the company of works that are still among the highlights of the Alte Pinakothek, such as The Honeysuckle Bower, The Rape of the Daughters of Leucippus and the Madonna in a Garland of Flowers, The Martyrdom of Saint Lawrence from the church of Notre-Dame de la Chapelle in Brussels, as well as The Fall of the Damned, originally from the collection of the Duke of Richelieu, and The Drunken Silenus, which had gone by descent to Philipp Rubens, the artist’s nephew. Johann Wilhelm did not concentrate solely on the work of Rubens, however. Anthony van Dyck was represented in his collection by the large Susanna and the Elders and two portrayals of Saint Sebastian, as well as by portraits and the Lamentation of Christ in landscape format. He also owned Jacob Jordaens’s As the Old Sing, So Twitter the Young and the Satyr with Peasants. These were supplemented by numerous small-format paintings by such artists as Jan Brueghel the Elder, Adriaen Brouwer and David Teniers the Younger. Presented at first in the cabinets of the Düsseldorf residence, they were transferred under Karl III Philipp (1661–1742) to the castle at Mannheim. An exhibition held at the Alte Pinakothek in 2009 reconstructed the hang of the two galleries on the basis of four pen-and-ink drawings made by Johann Philipp von der Schlichten in 1731.

In Munich the collection was expanded substantially around 1700. Maximilian II Emanuel, Elector of Bavaria (1662–1726) and grandson of Maximilian I of Bavaria, had acquired numerous Flemish paintings during his time in Brussels as governor of the Spanish Netherlands. His most important purchase was made in 1698, when he bought a group consisting of 101 mainly Flemish works from the Antwerp merchant Gisbert van Colen, who was married to Maria Fourment, a niece of Helene Fourment, Rubens’s second wife. Thus numerous paintings formerly in the possession of the Rubens family entered the Munich collection, including portraits of Helene Fourment “in her bridal gown,” “putting on a glove,” and “with her young son Frans.” Other paintings from the Rubens family include Rubens and his Second Wife in the Garden, now attributed to his studio, and the autograph Polder Landscape with Herd of Cows, as well as eight works by Adriaen Brouwer. Particularly impressive is the ensemble of portraits painted by Van Dyck, including the double portrait of Filips de Godines and Sebilla vanden Berghe, and the portraits of two married couples: the painter Theodoor Rombouts, and his wife, Anna van Thielen (portrayed with their daughter), and the painter Jan de Wael and his wife. Max Emanuel also instigated the conversion, begun in 1701, of the New Palace of Schleißheim, which was intended to house his extensive collection of paintings. Starting in 1719, he had the Great Gallery, patterned after the famous Hall of Mirrors at Versailles, furnished in the French style. It was here that the most important paintings from the Electors’ collection were presented. Their frames in regency style, which were designed by Joseph Effner as part of the overall interior design, still define the general appearance of the Flemish paintings in the large galleries of the Alte Pinakothek and betray the princely origins of this collection.

The collection continued to grow as it passed through the hands of a succession of heirs, but the paintings kept in the various residences began to reach Munich only in the course of the Napoleonic Wars. The last part of the Wittelsbach holdings to arrive in Munich, in 1806, were the paintings from the Düsseldorf gallery. Apart from a few works that remained in Düsseldorf, the collections of paintings of various branches of the family were thus united in Munich between 1799 and 1806. During the process of secularization, works such as Rubens’s Woman of the Apocalypse were added to these holdings, as well as a few purchases made in the following period. The most important addition to the Flemish collection was the acquisition in 1994 from a private collection in England of an oil sketch by Rubens with preparatory studies for the Lion Hunt – which had been in the Munich collection since 1706 – on the recto and the modello for the Marriage of Maria de’ Medici on the verso. This was the perfect addition to the collection of Rubens’s oil sketches for the Medici cycle, which have been documented in Munich since the eighteenth century. 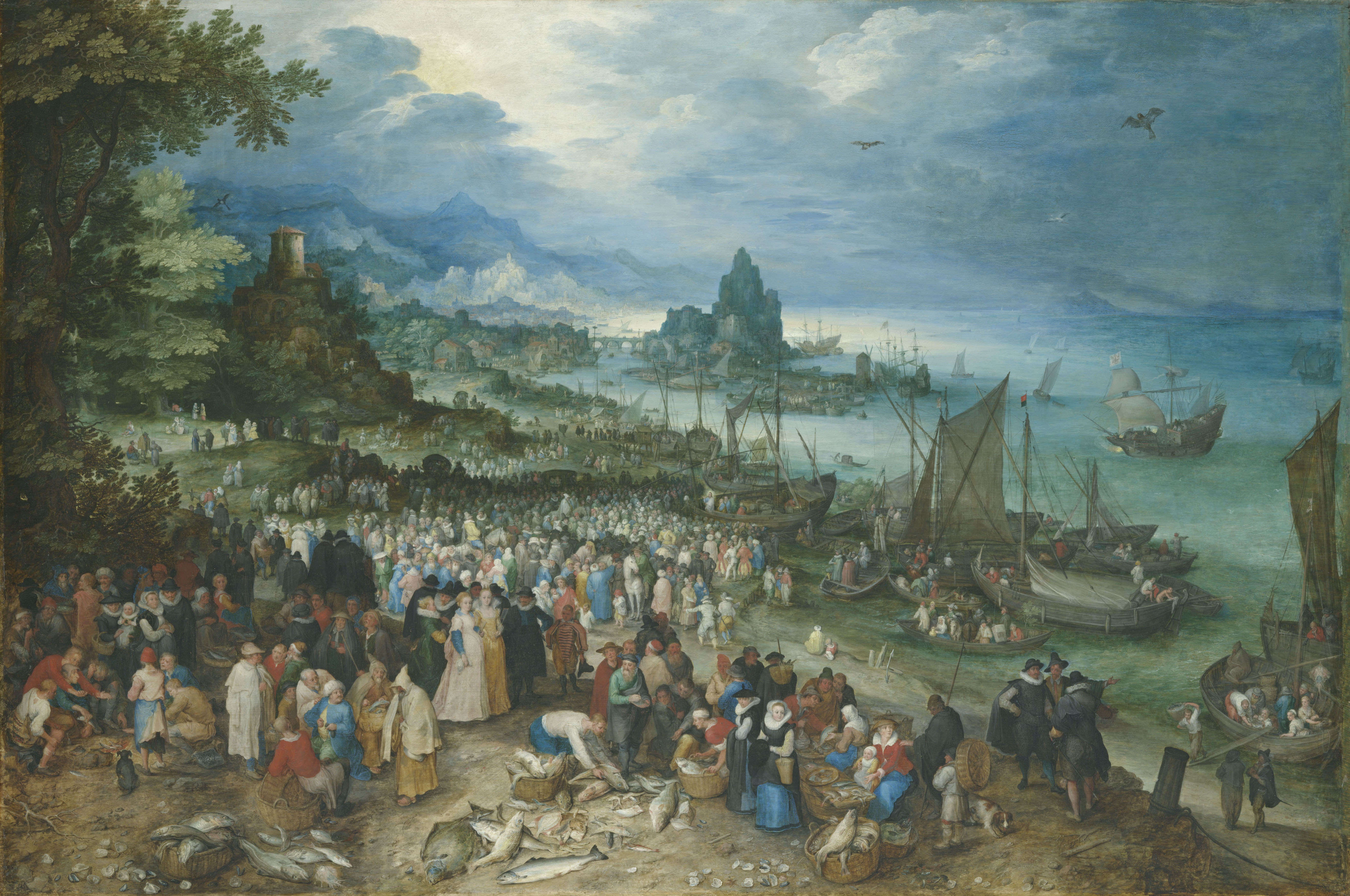 The fact that this extensive collection is distributed over several locations does not make it easy for visitors to grasp the variety and significance of the Flemish paintings in the Munich holdings. A good example is the excellent collection of autograph works by Jan Brueghel the Elder – comprising no fewer than forty-nine paintings – to which an exhibition in the Alte Pinakothek was devoted in 2013. Such famous masterpieces as the Harbor Scene with Christ Preaching and the Large Fish Market, as well as pictures usually preserved in the branch galleries and depots, were displayed amid numerous loans. This first overview of the entire Brueghel collection in the Alte Pinakothek clearly showed the outstanding quality and variety of his work.

Such exhibitions are an ideal opportunity not only to publicize the breadth of the museum’s holdings, which in part are largely unknown to the public, but also to present the results of the scholarly investigations into those holdings that are carried out by the museum’s curators and conservators.

Mirjam Neumeister is Curator of Flemish paintings at the Alte Pinakothek in Munich (München), Germany. She has been a member of CODART since 2007.