Since the Middle Ages, sets of tapestries – the products of painstaking handiwork involving wool, silk and metal threads – have served to radiate stately grandeur and political aspirations. Owing to their costliness, such wall hangings remained the preserve of the elite, mostly from aristocratic and clerical circles. Signifying dignity and ennoblement, they were temporarily put on display on festive or ceremonial occasions to decorate interiors and sometimes also public spaces.

The over seven hundred tapestries preserved in the Kunsthistorisches Museum (KHM) in Vienna constitute one of the largest and most important collections of its kind in the world and bear eloquent witness to the splendor once associated with this textile medium. The core of the Vienna tapestry collection harks back to the House of Habsburg, whose members – like the dukes of Burgundy before them – were among Europe’s most important patrons and lovers of tapestries. In particular, the extraordinary acquisitions of Emperor Charles V (1500-1558) set high standards for the other courts of Europe. 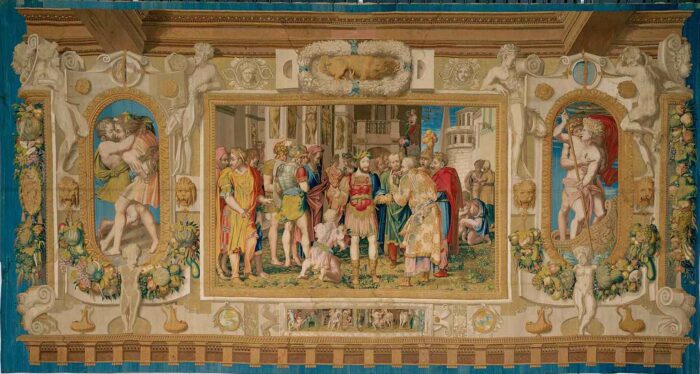 It is almost impossible to unravel the details of the history of the Vienna tapestry collection, owing to the scant reports of their commissions, purchases and often very eventful pasts. One of the earliest testimonies is an inventory drawn up between 1666 and 1679, which primarily lists the subjects of the tapestries and occasionally the names of the designers, manufacturers and previous owners. At the top of the list is one of the most prominent and exceptional sets in the Vienna collection, namely the six-piece series depicting the Histori von Khönig in Frankreich (History of the King of France). The patron of this so-called Fontainebleau Series (cartoon: Claude Badouin; weavers: Jean and Pierre Le Bries, Fontainebleau 1540-47) was the French king Francis I. The renovation (1528-32) of his residence at Fointainebleau had included the creation of the so-called Great Gallery under the supervision of the Florentine artist Rosso Fiorentino (1494-1540). The Fontainebleau Tapestries represent a woven repetition of the decoration of the south wall of this gallery.

Similar to the Fontainebleau Series, the circumstances of the production of a ten-piece series displaying Portrayals of Emperor Charles V’s Campaign against Tunis of 1535 are also documented (the ten surviving cartoons are preserved in the Picture Gallery of the Kunsthistorisches Museum). In the capacity of war correspondent, Jan Cornelisz Vermeyen (ca. 1500-1559) took part personally in the campaign. He was also responsible for the designs and cartoons executed between 1546 and 1550. The editio princeps of this series, produced for Emperor Charles V, now belongs to the Patrimonio Nacional in Madrid. Preserved in Vienna, on the other hand, is another edition of the same series, executed after the same cartoons between 1712 and 1721 for Emperor Charles VI by the distinguished Brussels manufacturer Jodocus de Vos (active 1700-1725).

By contrast, the history of most of the other tapestries in the KHM are documented in far less detail. For example, only one series in the KHM – “verdures” produced around 1540 by the famous Brussels manufacturer Willem de Pannemaker (recorded 1539-1581) – can be traced, on the basis of his coat of arms – to Emperor Charles V, a great tapestry patron with extensive holdings.

Maximilian II (1527–1576), the nephew of Emperor Charles V, also owned numerous tapestries. A set depicting the Seven Virtues – produced in the Brussels workshop of Frans Geubels in the second quarter of the sixteenth century – still belongs to the Vienna holdings. Maximilian inherited the series from the estate of his sister, Queen Catherine of Poland († 1572). Archduke Ferdinand II of Austria (1529–1595), the brother of Maximilian II, was also fascinated by the textile medium. Several sets of tapestries in the KHM’s holdings, such as a series depicting the Six Ages of the World, can be connected with this patron and passionate art collector. The prominent series, likewise preserved in Vienna, of Garden Landscapes with Animals, also known as the Granvelle Gardens (Brussels 1564), was commissioned by the great art lover, cardinal and statesman Antoine Perrenot de Granvelle (1517-1586) from the above-mentioned Brussels manufacturer Willem de Pannemaker. After the cardinal’s death, the series was acquired by Emperor Rudolf II (1552-1612).

One of the greatest art collectors and patrons of the Habsburg dynasty was Archduke Leopold Wilhelm (1614-1662), regent of the Southern Netherlands. He not only owned one of the most impressive collections of paintings of his time, but also possessed a large number of tapestries. A considerable part of his estate was passed down to Emperor Leopold I (1640-1705), who probably also inherited six tapestries depicting the Months and an allegorical representation of Night, which Archduke Leopold Wilhelm had commissioned in 1650 in Brussels, together with a depiction of Day, a representation of the Four Seasons and another of the Four Elements. The designs were produced by Jan van den Hoecke (1611–1651), the archduke’s court painter, and the tapestries were woven by the Brussels manufacturers Everard Leyniers and Aegidius van Habbeke. In addition to the tapestries, the archduke also inherited the relevant designs and cartoons, all executed in oil and likewise preserved in the Picture Gallery of the Kunsthistorisches Museum. There is also extensive documentation on tapestry-collecting at the court of Emperor Leopold I. For example, the Vienna merchant Bartholome Triangl was ordered to procure baldachins, tapestries and carpets to embellish the imperial palace on the occasion of the emperor’s marriage to the Spanish Infanta Margarita Teresa in 1666. The six series that Triangl had sent from the Southern Netherlands to Vienna can largely be traced to their place of origin. One of these series is the spectacular eight-piece set depicting Riding Lessons (Brussels ca. 1665/66).

What was probably one of the greatest additions to the tapestry collection occurred on the occasion of the marriage of Maria Theresia to Franz Stephan von Lothringen (1708-1765) in 1736, when the bridegroom had no fewer than twenty sets of tapestries brought to Vienna. Among them was the Throne Baldachin of 1561, which is still one of the most spectacular pieces in the collection. Hans Vredeman de Vries (1527-1606) was responsible for the composition’s illusionistic architecture, and Michiel Coxcie (1499-1592) designed the figures of Pluto and Proserpine. 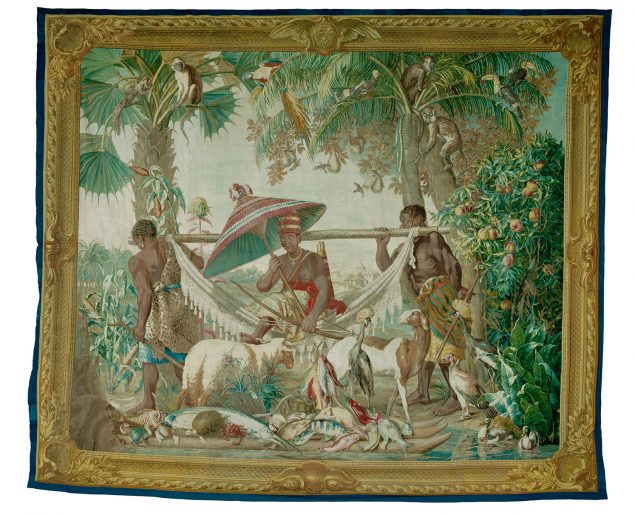 A large number of the Vienna tapestries of French origin entered the collection as diplomatic gifts. In 1777, when Emperor Joseph II (1741-1790) was staying in Paris incognito, posing as the Comte de Falkenstein, his sister Maria Antonia and her husband, King Louis XVI, presented him with several series at once. Among them were the Tapestries after Frescoes by Raphael (Royal Gobelins Manufactory, Paris 1765–71), the so-called Nouvelles des Indes (after Alexandre-François Desportes, Royal Gobelins Manufactory, Paris 1774–78), the Meuble Rose (Boucher Room), a set consisting of covers for two sofas, twelve armchairs, a hearth screen and a partition, as well as four tapestries with central oval images after François Boucher (1703-1770) and alentours after Maurice Jacques (Royal Gobelins Manufactory, Paris 1772–76). Since 1880 in particular, these furnishings have pride of place, having been chosen to decorate a room in the Vienna Hofburg. This honor was also bestowed on numerous other tapestries, owing to the renewed interest in prestigious textile wall decorations in the second half of the nineteenth century.

The last addition made to the collection by a member of the House of Habsburg occurred during the reign of Emperor Franz Joseph I (1830-1916), who authorized the purchase of a nine-piece set of tapestries depicting Scenes of the Gospels after designs by Raphael (Brussels, late sixteenth/early seventeenth century). Moreover, he was presented with a portrait (ca. 1814/15) of Marie Louise of Austria (1791-1847) as empress of the French, executed at the Royal Gobelins Manufactory after a design by François-Pascal Simon Gérard (1770-1837).

The tapestries from the former Habsburg holdings were still in use in the time of Emperor Franz Joseph I. It was not until the fall of the monarchy and the transfer to the Kunsthistorisches Museum of all artworks depicting religious, mythological, historical or moralizing subjects that the tapestries largely became objects in a museum context. A small number of them, which are alternated regularly for reasons of conservation, are on display in the Kunstkammer Wien. Special exhibitions also offer an ideal opportunity to make these fragile objects accessible to a wide public.

Dr. Katja Schmitz-von Ledebur is curator of the Kunstkammer and tapestries, Kunsthistorisches Museum (KHM), Vienna, Austria, she has been a member of CODART since 2008