After coming under departmental control in 1997, the Musée d’Art, d’Histoire et de Folklore in Cassel embarked on a new chapter in its history. A scientific committee comprising French and Belgian historians, art historians, geographers, and linguists pondered its future, giving rise to a project that may initially seem surprising: a museum dedicated to the different artistic expressions of Flemish culture. This approach is legitimized on the one hand by the history of the Hôtel de la Noble-Cour (fig. 1), which has provided a setting for the collection since 1964, and on the other hand by the diversity of the collection. 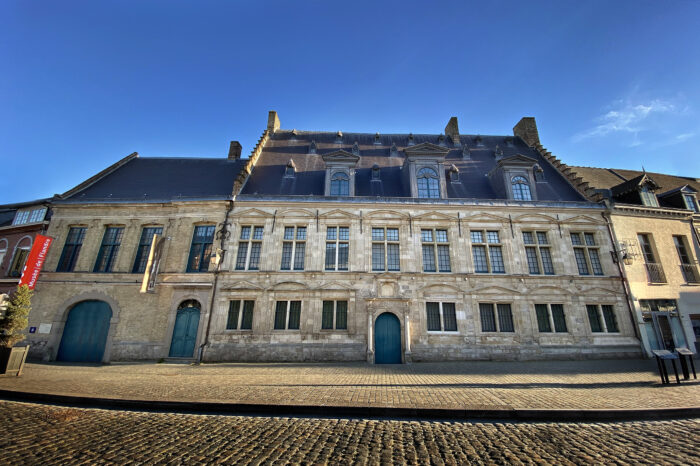 A jewel of Flemish architecture, its astonishing mid-sixteenth-century façade combining Renaissance models with a Flemish vocabulary, the role of this civil building was originally purely administrative. The castellany of Cassel comprised fifty-four parishes in what is now the Flandre Intérieure region. The territorial aspect is therefore intrinsic to the function of this historic monument. Although it is not known for certain when the castellany was created—historians believe it may go back as far as the eleventh century—the archives document its purchase in 1218 by Countess Jeanne of Flanders, who endowed it with a court of justice. Thus the two powers were exercised under the same roof, which is unusual, emphasizing the singularity of this place. Once the bastion of Robert the Frisian, Cassel’s destiny was bound up with that of the County of Flanders until Louis XIV’s campaigns of 1677. At that point it passed into the possession of the Kingdom of France while seeking to preserve its Flemish dialect by means of a Chamber of Rhetoric. From its stepped gables to its vast horizons, from its patronymics to the designations of the legendary defenders of the town—the giants Reuze Papa and Reuze Maman—all here is imbued with the spirit of Flanders. A Flanders that is authentic, historic, convivial, mysterious, captivating. That the museum should see as its vocation to focus on the history of the region of which it is a part was therefore only natural. What remained to be determined were the precise borders of this region…

It was decided to take a very wide view of Flanders through a cultural approach that aspired to the universal, thereby avoiding getting bogged down in questions of geographical limits and linguistic and/or historical debates. By nature, a museum bases its discourse on its collection, whatever the period, style, or categorization. Flemish art flourished within a geographical area that shifted continually over the course of time. This explains the tendency of the French to add an “s” to Flandre. The Musée de Flandre might have focused its attention solely on the Flandre Intérieure region, which belongs to France, but this would have made no sense from an artistic point of view. Strangely enough, in spite of its geopolitical fluctuations, Flanders comes across as a homogeneous entity easy to define thanks to a strong cultural identity deriving mainly from its art. And this is the foundation on which the Musée de Flandre project has been built: to create a museum space dedicated to showcasing the full richness and plurality of Flemish artistic expression—from old masters to contemporary art. 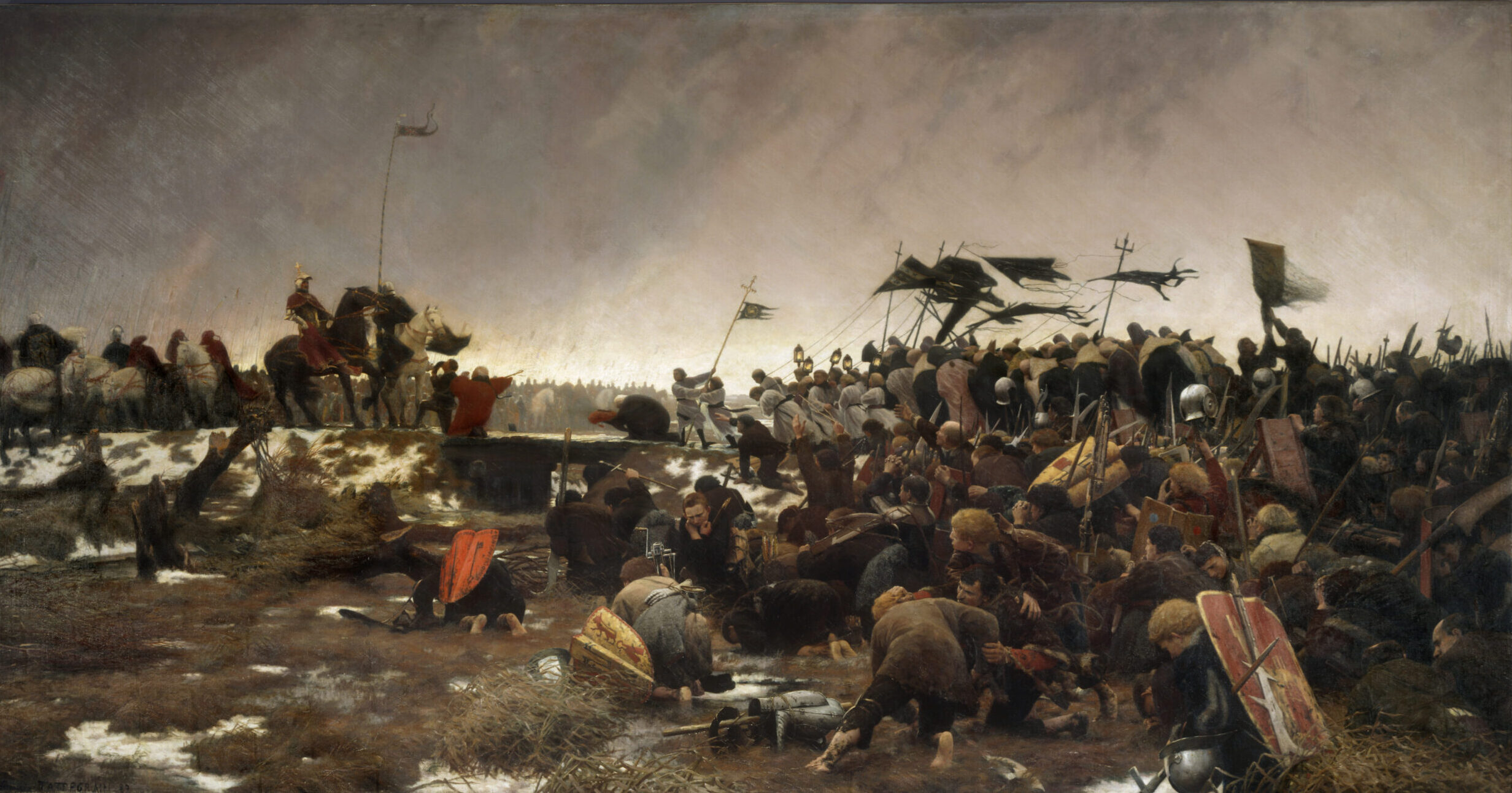 Having assumed its current form in 2010, the Musée de Flandre does not claim to rival international museums whose prestigious Flemish works derive from royal collections or from generous donations made predominantly in the nineteenth century. The destiny of this museum has been quite different. Created in 1853 thanks to a transfer of property from a mineralogy enthusiast, it quickly took on an ethnographic character and was maintained by volunteer curators. The merry jumble of a collection, with a few paintings dotted here and there, plunged its mesmerized visitors into the cave of Ali Baba. For this reason, despite its territorial anchoring, the museum has hardly received any loans from the French state, nor from the MNR (Musées Nationaux Récupérations, the French state organization that manages the looted artworks recovered from Nazi Germany).The only work with which it has been entrusted by the state is Francis Tattegrain’s The People of Cassel Throwing Themselves on the Mercy of Philip the Good in the Saint-Omer Marshes on January 4, 1430 (fig. 2), received in 1956. Against a backdrop of regionalist demands, however, the curator of the day, fearing criticism, did not dare show the work, and so the rolled canvas spent the next forty years in storage in the museum’s attic, only to be rediscovered in 1997. Having been restored, it is now one of the paintings most appreciated by the public, not least for its spectacular vantage point, which plunges the viewer into the throes of war and the struggle for power—a romantic interpretation in the tradition of Viollet le Duc. 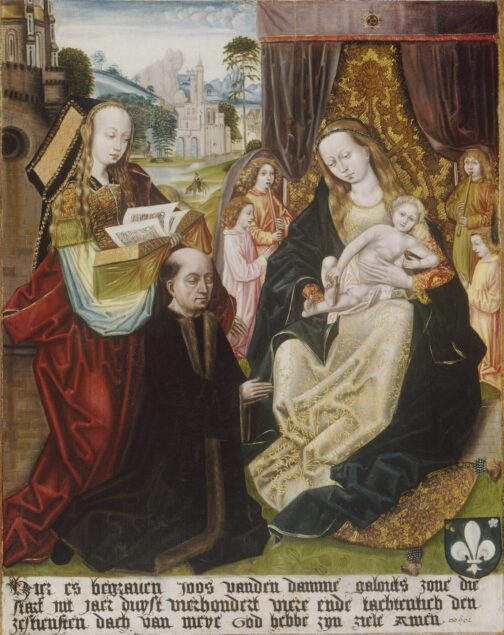 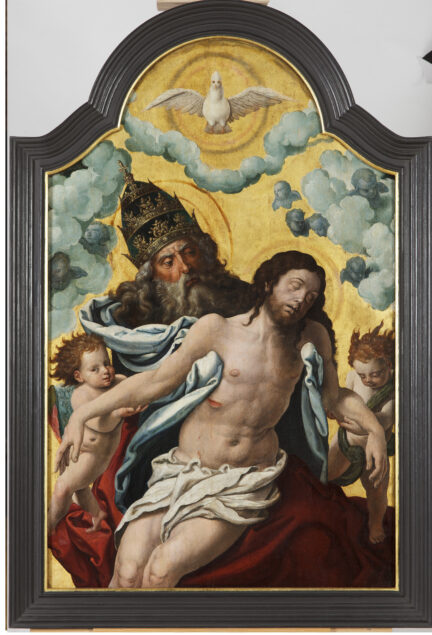 Religious works are one focus of the Musée de Flandre collection. Of small or medium format, they testify to a new spiritual movement, the Devotio Moderna, which exhorted the faithful to cultivate a more internalized relationship with Christ. The Holy Trinity by Pieter Coecke van Aelst (fig. 4), whose composition was inspired by a Dürer engraving, is an example of a work that needs to be viewed through this lens. Against a dazzling golden background representing an emanation of the divine, the powerful figure of God the Father, depicted frontally, reveals his humanity as, with agonized features, he implacably supports his dying son. Juggling balance and imbalance, torsion and fluidity, exultation and solemnity, this unprecedented painting, deriving from a private collection, is distinguished by its sureness of hand. Prior to this discovery, the triptych in the Bonnefantenmuseum in Maastricht, whose central panel is identical to ours, was considered the prototype. In view of the quality of the brushwork, the very free underdrawing, visible in many places to the naked eye, and scientific analysis conducted by Ghent University, this position now needs to be reviewed. Recently, the museum acquired at auction a very small painting of The Arrest of Christ by Jan van Dornicke, master of Pieter Coecke van Aelst, thereby establishing a visual dialogue between the artists. 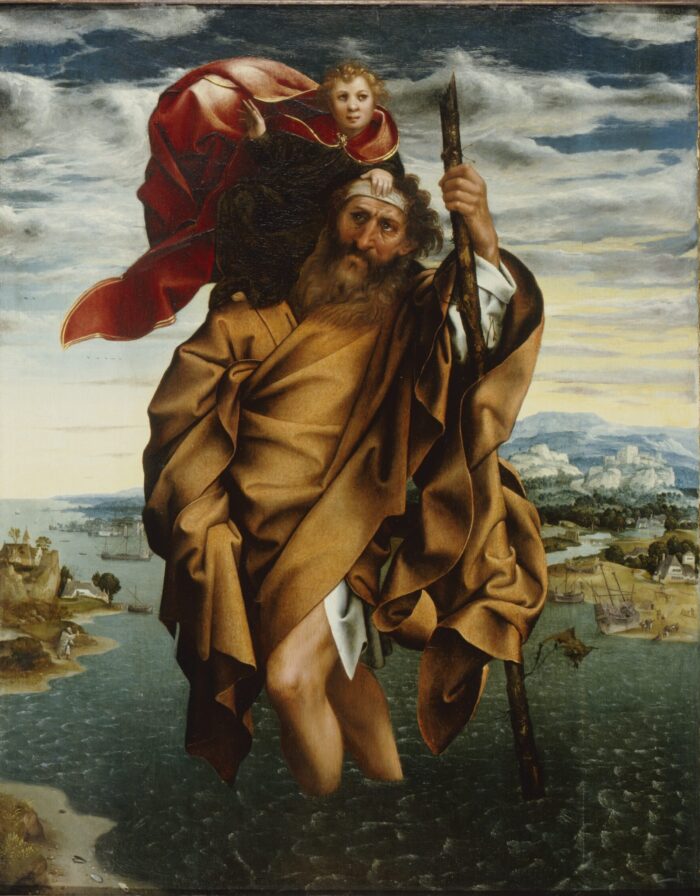 From one angle and then another, the eye scrutinizes the smallest of details, taking delight in them and perceiving in them the very essence of Flemish art. Rising up like a colossus, the sculptural St. Christopher (fig. 5) battles the choppy waters of the river in order to carry to the other side the creator of the world, the Christ Child. A crossing, the traditional symbol of conversion, an untiring stride through an immense landscape, the reflection of an ideal and harmonious world. From the infinitely small to the infinitely large, from the fanciful to the lifelike, from the deep folds of the drapery to the smooth, almost surrealist clouds, reality slips through our hands without worrying us in the slightest. Such is the magic of this unusual work. While the landscape is unquestionably Patinirian, infrared analysis has revealed that the central figure, which bears a stylistic resemblance to the work of Quinten Metsys, was left in reserve. Delicate and debatable attributions of this kind in no way detract from the originality of this oil painting on panel which to our knowledge has never been copied. Atmospheric, or more accurately—given that it derives from the gradation of three colors (ocher in the foreground, followed by greens then by shades of blue in the distance)—chromatic perspective dominated the entire sixteenth century and endured beyond. It also lends form to Roelandt Savery’s bucolic forest (fig. 6) whose trees, with their lacework foliage, form the wings of a fantastic stage set that leads the eye to a fairy-tale castle. In contrast to this paradise, elsewhere the Dantesque depths tug at the souls of poor sinners. Fire blazes at the gaping mouth of Hell, where Cerberus lurks, or consumes biblical Sodom and Gomorrah in hypnotic fashion (fig. 7). 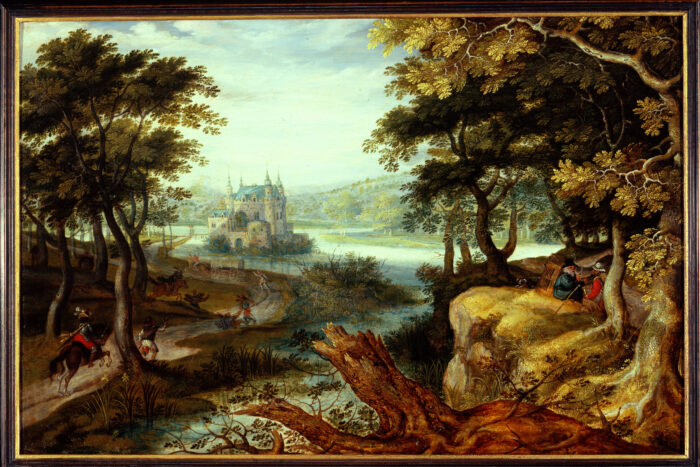 From valley floor to hilltop, incandescent smoke lights up the sky. No one but Lot and his daughters, visible in the foreground, will survive the divine wrath. Attributed to Joos de Momper for its loose touch, almost Impressionist in the way color prevails over line, this panel is striking for the unusually large dimensions it devotes to the subject. And this “out of the ordinary” is precisely what the Musée de Flandre is after. Quite apart from the geniuses of Flemish painting, there is a plethora of masters who have also left their mark on the history of art. Open to the world, these masters—sometimes adventurers for whom the Alps held no fear, often unsuspected scholars, or perhaps formidable merchants steeped in the mischievous wit of Till Eulenspiegel—share an inclination toward a certain lightheartedness, evident in their earthy genre scenes in the manner of the singeries (fig. 8) that parody the human condition. Diverse on many different counts, Flemish art is as bewildering as it is fascinating. 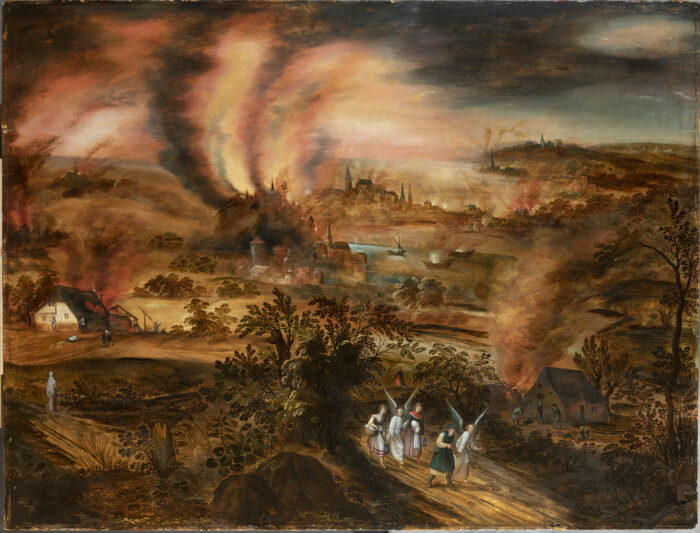 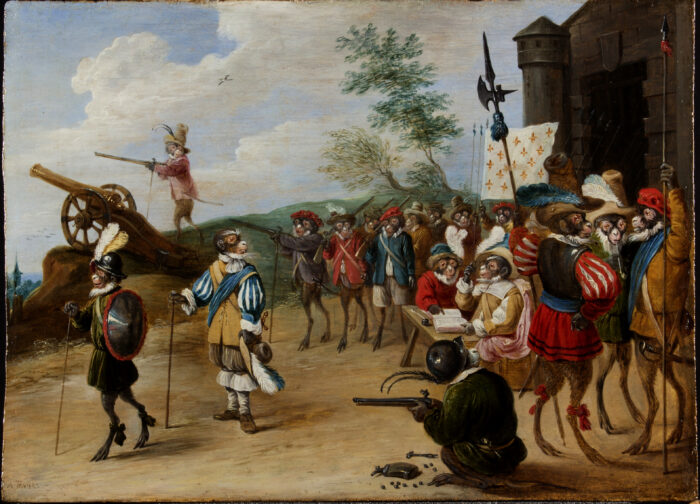 In harmony with its acquisition policy, the museum’s temporary exhibition programming reinforces its scientific orientation and centers around two main approaches: straying off the beaten track and challenging prejudices. These exhibitions alternate between the thematic (Sensualité et Volupté in 2010, Splendeurs du Maniérisme in 2013, La Flandre et la Mer in 2015, L’Odyssée des Animaux in 2016, Fêtes et Kermesses au Temps des Brueghel in 2019), and the monographic (Érasme Quellin in 2014, Gaspar de Crayer in 2018, La Dynastie Francken in 2021), an approach that allows the museum to call upon the expertise of international art historians, to further knowledge, to initiate debate (in particular where attribution is concerned), and to surprise its visitors by helping them to discover paintings overlooked by history or subjects hitherto no more than superficially grasped. The combination of these two approaches has without doubt helped to forge the museum’s identity and boost its reputation over the course of the years.

Sandrine Vézilier-Dussart is director and curator at Musée de Flandre in Cassel, France.

This article was translated from French by Richard George Elliott.