On 4 December the exhibition Aged well: Three Centuries of Drawings from the Kröller-Müller collection opened at the Kröller-Müller Museum in the Netherlands. It is not widely known that in addition to the art of her own time, the museum’s founder, Helene Kröller-Müller (1869–1939), also collected older works of art – both paintings and a great many drawings. For the exhibition and accompanying publication, a selection has been made of 100 of the finest and most exceptional drawings dating from the sixteenth to the early nineteenth century. Some of these works are being exhibited for the first time in the history of the museum. 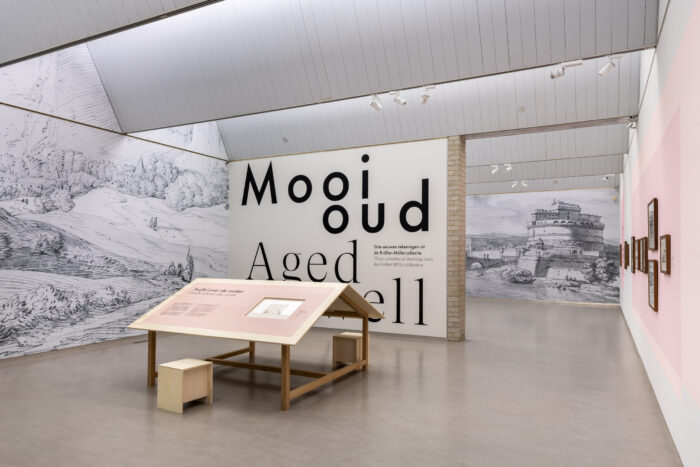 About three years ago, while conducting research for the exhibition Drawn from life – which opened in October 2019 and focused on drawings between 1850 and 1950 – the plan was hatched to study the collection of drawings that can be dated before 1850. Although the collection is not well known, several publications that have appeared since the Kröller-Müller Museum opened in 1938 have included works from the collections of drawings from this earlier period. For example, in the second edition of the descriptive catalogue Rijksmuseum Kröller-Müller: Schilderijen XVe–XVIIIe eeuw (fifteenth to eighteenth-century paintings) from 1959, Bram Hammacher, the museum’s director from 1947 to 1963, added around 50 of them, explaining: “without overestimating the drawing collection, […] it [has proved] nevertheless to be of sufficient importance for the museum to preserve from oblivion.” The first catalogue with a more or less complete overview of the nineteenth and twentieth-century drawings was published in 1968, followed in 1981 by a museum catalogue containing virtually all the drawings prior to 1800. For the latter, descriptions and research were provided by the art historians Herman Colenbrander (b. 1945) and Jan van der Waals (1947–2009). This reference work, including microfiches that are unreadable today, still provides the sole overview of the collection of old drawings and thus formed the point of departure for the present project.

The Kröller-Müller teamed up with several CODART members. The RKD – Netherlands Institute of Art History – was involved from the beginning. In particular, we received tremendous support from Yvonne Bleyerveld, Senior Curator of Drawings and Prints at the RKD and since October 2020 Professor of Art on Paper and Parchment at the Faculty of Humanities of Leiden University, who was to become my help and stay in this period.

Examination of the inventories from 1928 and 1930 (given that numerous attributions have changed over time, the original inventories have been used in order to gain a more accurate picture of what the founders of the museum believed they were collecting) shows that a quarter of all the drawings – roughly 1,000 sheets – can be dated to before 1850. About 60% of these were produced by artists from the Northern or Southern Netherlands, 5% are Italian and 3% French, with only a handful of German drawings. Landscapes, topographical drawings and figure studies are by far the most prominent genres, followed at some distance by genre drawings and mythological and biblical scenes. There are very few portraits or history drawings.

We initially focused on the many Northern and Southern Netherlandish drawings with specialists Robert-Jan te Rijdt (curator of eighteenth/early nineteenth-century drawings, Rijksmuseum), Marijn Schapelhouman (former curator of seventeenth-century drawings, Rijksmuseum) and Vera Hendriks (Utrecht University, who is working on a Master’s thesis on Jacob Esselens). Later also the Italian drawings were studied, with Carel van Tuyll van Serooskerken (Honorary Curator of Art Collections of Teylers Museum). Together we managed to examine some 500 of the total of 1,000 drawings. We concluded that it was not Kröller-Müller’s goal to build up a balanced collection – as Franz Koenigs (1881–1941) or Frits Lugt (1884–1970) had done in the same period. Rather, one is left wondering whether she based her acquisitions on a taste instilled by Bremmer’s lessons and the influence of other collectors, who used early art to throw their modern collection into relief. In this sense, the old drawings ought not to be viewed as a sub-collection in their own right, but as a complement to the old master paintings. The collection nonetheless includes interesting, rare, and outstanding drawings. 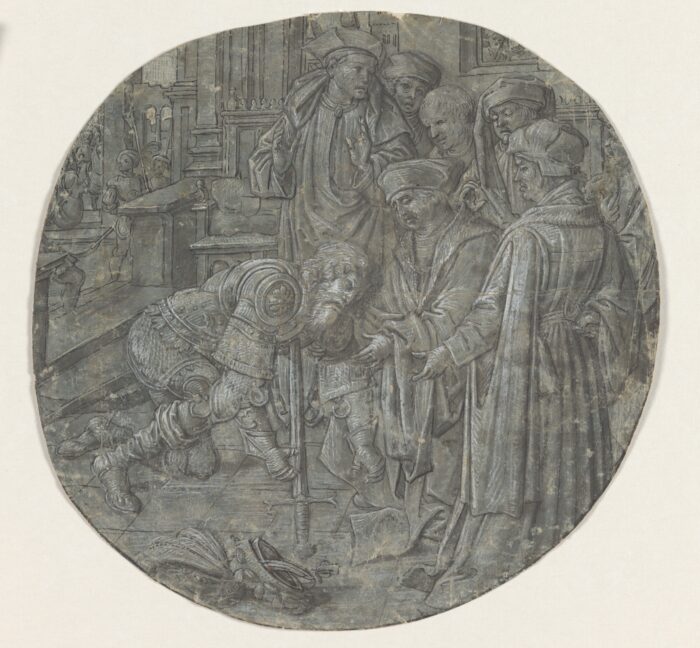 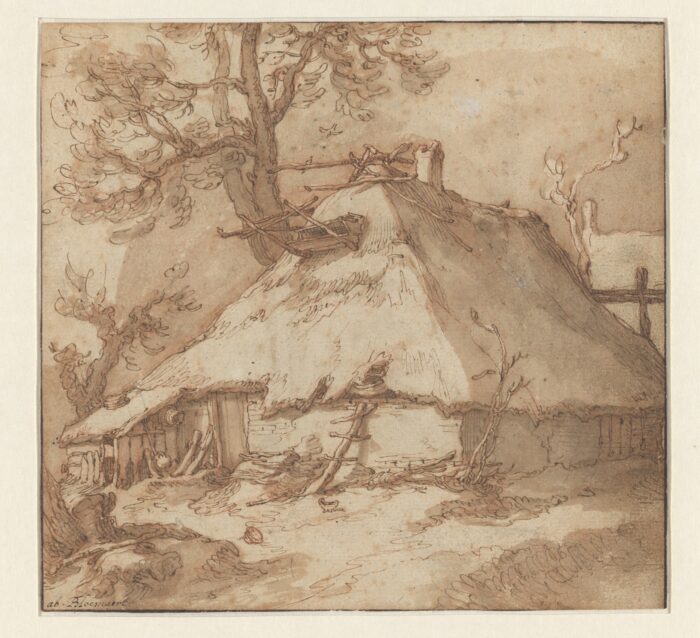 The oldest sheet in the selection is a pen and ink drawing on grey-blue prepared paper, which Bremmer bought as a drawing by “C. Engelbrechts” for the Kröller-Müller collection in the auction of the A. Sigwalt and F. Adama van Scheltema collections at Frederik Muller & Co. in June 1912 for 180 guilders. While the attribution to Cornelis Engebrechtsz (c. 1462–1527) was later discarded, it is still highly likely that the drawing was made in his workshop. The round shape, the size, and the technique of this drawing indicate that it was made as a design for a silver-stained or painted glass panel.

On 27 May 1913 Helene Kröller-Müller visited the Frederik Muller & Co. auction house in Amsterdam again, together with Bremmer, for the sale of Old Master drawings belonging to the British collector John Postle Heseltine (1843–1929) and the German art historian Dr. Jean Paul Richter (1847–1937). She wrote in a letter that she was “not considering the Rembrandts [from the Heseltine collection], but there are less well-known items that might be overshadowed by that great name and yet still appeal to me.” This is the only reference she makes to this part of her collection. The collector and her advisor did not go home empty-handed: they bought the drawing Dilapidated farmhouse (recto) by Abraham Bloemaert (1566–1651) for 55 guilders. The drawing is a striking example of Bloemaert’s drawings of farmhouses. The scene was drawn in pen and brown ink over a sketch in red chalk, following which the dark zones were colored in using diluted ink. Both the drawing of the farmhouse and that of the haystack (verso) were probably made around 1600–1603. 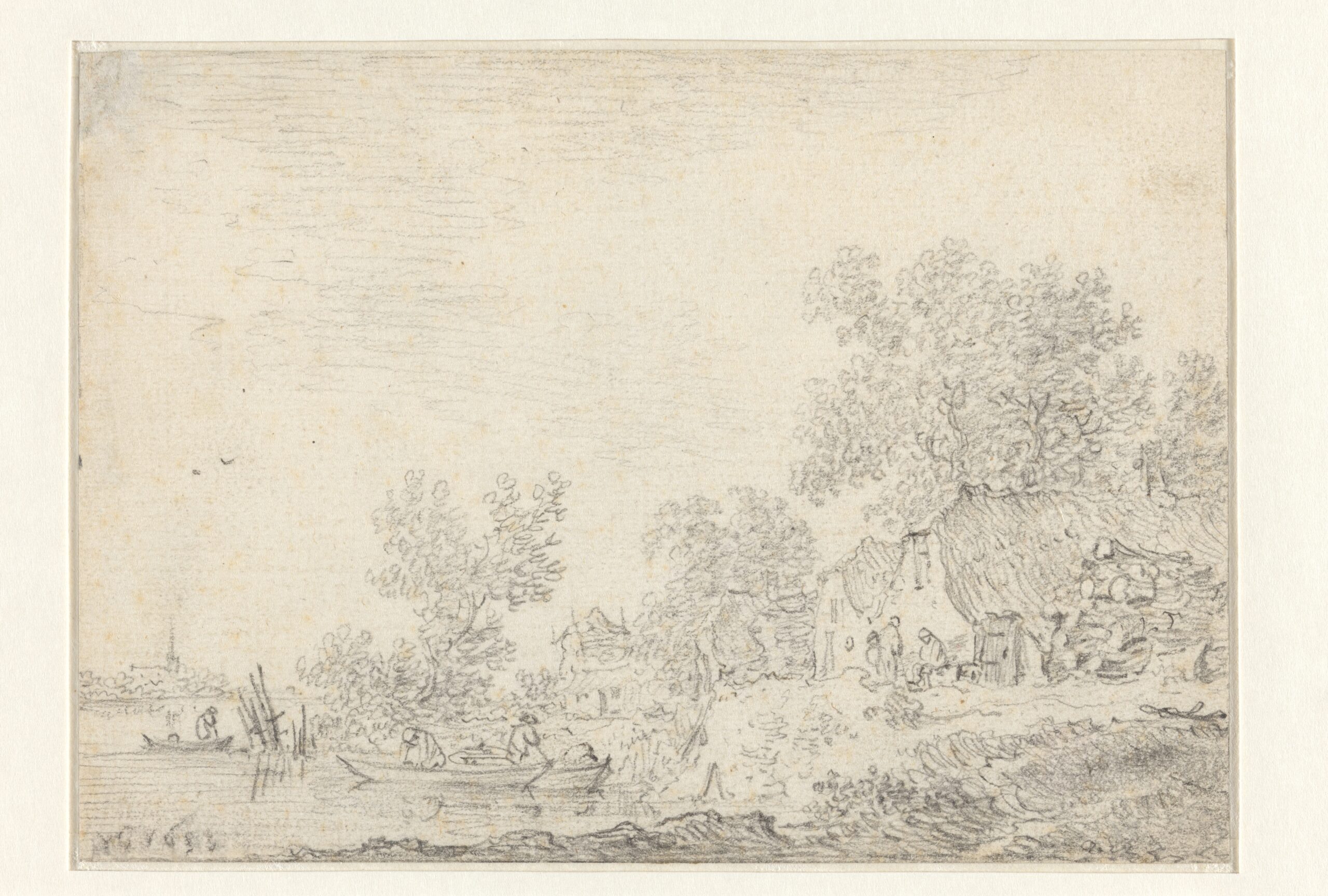 At the same sale they also acquired a small chalk drawing Houses under tall trees by a river dated 1633 by Jan van Goyen (1596–1656) for 100 guilders. The drawing served as the basis for a painting from 1646 (Edinburgh, National Gallery of Scotland; Beck 1973, p. 245, no. 525 (ill.)). It is one of the ten drawings by Van Goyen in de Kröller-Müller collection, of which seven were selected for the exhibition. 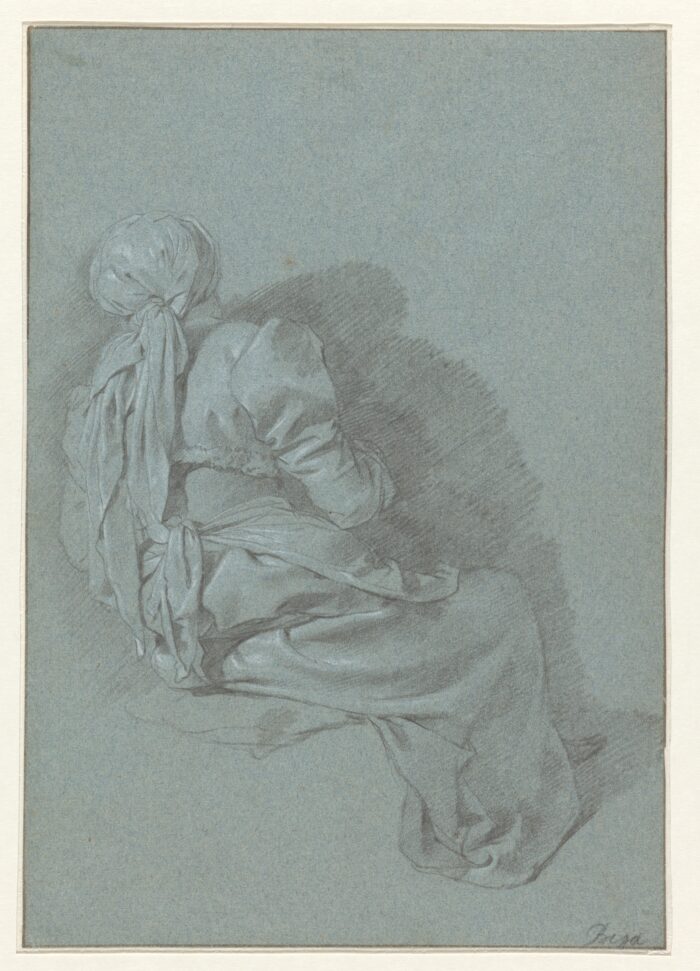 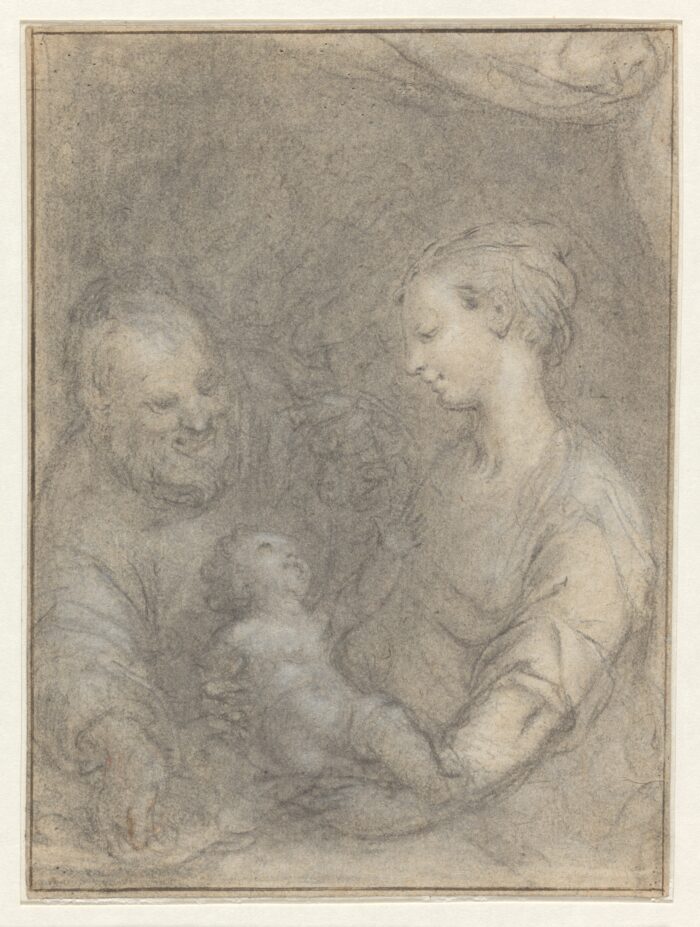 In the case of Van Goyen and his contemporary Pieter de Molijn, and more especially of eighteenth and early nineteenth-century artists (Jacob de Wit, Mattheus van Bree and Wouter van Troostwijk, to name just a few), the museum holds multiple sheets of their work. More frequently, however, artists are represented with one or two drawings. Nonetheless, some of the latter are fine examples of the artist’s drawing practice, like the figure study on blue paper by Cornelis Bega (1631–1664) or the chalk drawing by Hendrick Goltzius (1558–1617) of the Holy Family.

The most important auction for Helene’s collection of old drawings was the sale of the collection of Pieter Langerhuizen (1839–1918), former mayor of Huizen and Bussum, in 1919. The collector bought 29 drawings for the substantial sum of 6,547 guilders. The highest bid of 600 guilders was for the drawing The Belle-Fontaine in Tours and the Oude Keetpoort in Enkhuizen, 1691, by Lambert Doomer (1624–1700); she paid the same for Man with jug, attributed at the time to Adriaen van Ostade, but nowadays to his pupil Cornelis Dusart (1660–1704). 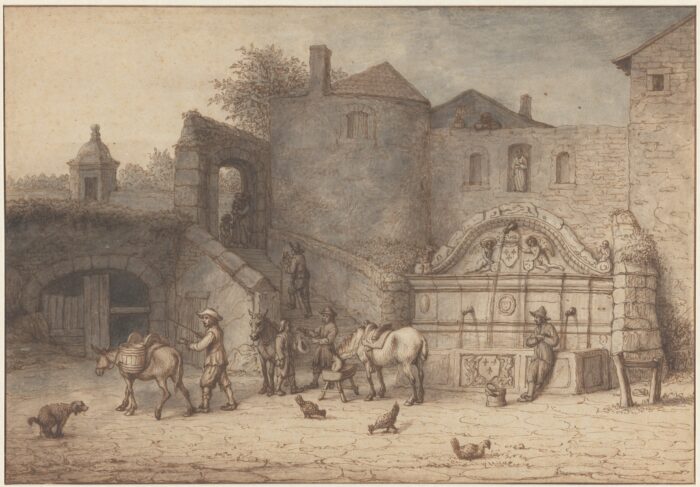 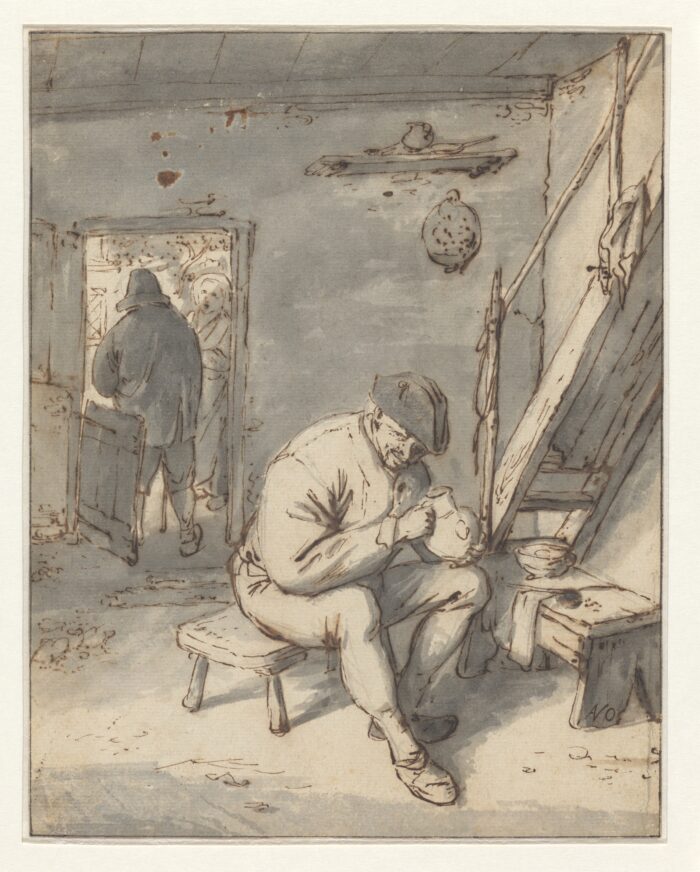 One of the biggest challenges of the project was how to present this quite eclectic selection of 100 drawings by 55 different artists from three different centuries. Focusing exclusively on the collection’s history, the common denominator, would not provide enough substance. For the publication we chose a thematic structure: grouping together pieces that exemplify similar functions, such as preparatory drawings, figure studies, or subject-related themes such as scenes of everyday life or landscapes close to home, as opposed to a broader view of the world. For the exhibition we adopted a similar approach, although here we devised “catchier” phrases like newspaper headlines, to entice visitors to study the drawings more closely.

With the COVID crisis once again threatening the museum with possible closure, I want to emphasize the challenging conditions in which this research project was conducted. Libraries and archives were closed and we worked from home, trying to stay in touch and meeting on digital platforms. It is impossible for me adequately to express my thanks to the team of dedicated specialists for their contributions and especially for the way in which everyone did their best to keep up our spirits. The goal of the project was to raise the profile of this part of the collection, in which endeavor I think we have already succeeded. Hopefully a good deal more research will follow. I invite CODART members to contact me if they wish to draw attention to a specific drawing that is of interest to their projects.

Renske Cohen Tervaert is curator at the Kröller-Müller Museum in Otterlo.