On the evening of 4 July 2018, just after the stroke of 7pm, the hammer fell. It was done. Following a nerve-racking bidding war at the Old Masters Evening at Sotheby’s in London, the competing bidders gave up lot number 36. The trophy went to art dealer Johnny van Haeften, who acquired Jacobus Vrel’s Street Scene with People Conversing (fig. 1) from the estate of the renowned collector, Baron Willem van Dedem of Surrey, for the Alte Pinakothek in Munich. 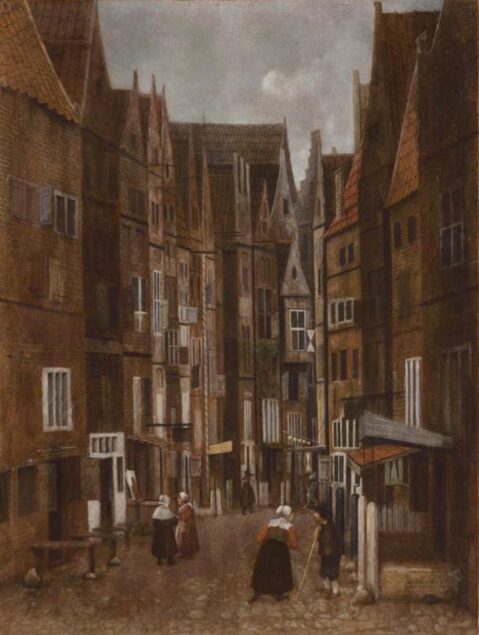 How did it come to pass, that one of the most renowned paintings galleries, with one of the most comprehensive and significant collections in the world, was eager to acquire a work from this curious, and mostly unknown, painter? The history behind this acquisition begins with countless trips and a number of opportunities for close examination of Vrel’s rare works with curatorial colleagues and private collectors. Vrel’s paintings captivated all of us. Following the rediscovery of Vrel at the end of the nineteenth century, there were more scholars engaging with Vrel than one would expect considering the sparse information regarding his life. Not one of them, however, has been able to solve the mystery of this painter and his unusual pictures. With the absence of archival documentation, several theories regarding his origins, whereabouts and influences have been projected: one placed him in the Southern Netherlands, others in various regions of the United Northern Provinces, Westphalia in northern Germany, as well as the region of the Baltic Sea.

There is only one contemporary document that mentions the painter and his works: the inventory of the significant collection of the Archduke Leopold Wilhelm of Austria (1614-1662), who, as Stadholder of Brussels between 1647 and 1656, assembled the collection which laid the foundation for the Kunsthistorisches Museum in Vienna. In this inventory, three of Vrel’s paintings are listed under his name (figs. 2-4).1 Furthermore, only about fifty attributable works exist as contemporary, primary sources, from which about two-thirds are either labeled by Vrel with a monogram or signed with his name. Vrel’s oeuvres consists of roughly equal parts cityscapes and interiors. In addition, there is a landscape with three people, a figural study and a church interior. 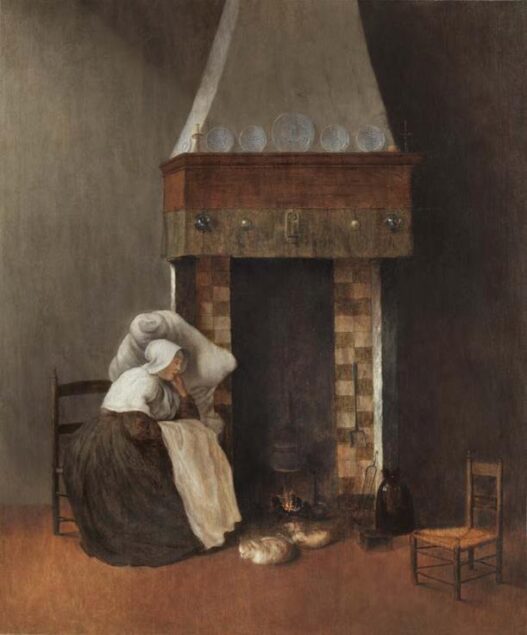 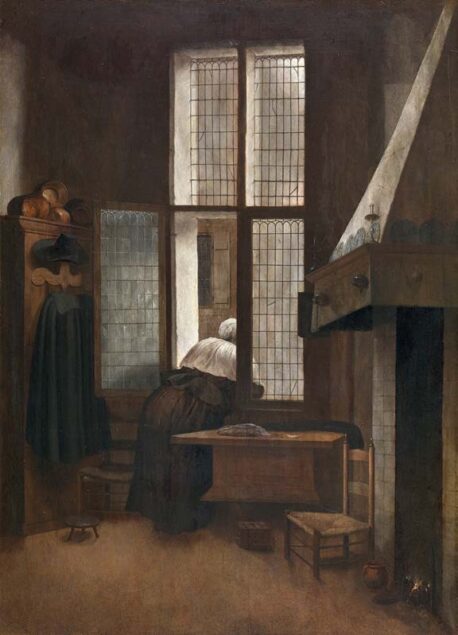 Vrel’s works were long confused with those of his more well-known artistic colleagues, including Pieter de Hooch, Pieter Janssens, known as Elinga and Little Masters such as Esaias Boursse and Isaack Koedijk.2 Most exciting in the research on Vrel, however, is the mistaken attribution of his works to those of the renowned Delft master, Johannes Vermeer. From the twenty-five known street scenes painted by Vrel, sixteen – more than half – were attributed to Vermeer. And it gets even better. When Vermeer was rediscovered in the 1860s by the French art critic, Theophile Thoré, the critics were full of praise as these works were introduced to the public in the Palais des Champs-Elysées in Paris. The street scenes, in particular, impressed authors such as Marquis de Villemer (alias Charles Yriarte) in the newspaper Le Figaro (20 May 1866) and Marius Chaumelin in the magazine Revue moderne (1 July 1866). As Chaumelin wrote: “These urban interiors are not like anything we know: they show alleyways lined by red brick houses which reach all the way up to the top. And yet, air and light circulate between them. It is impossible to imagine more delicate, translucent, harmonious coloring.” But Vermeer’s only street scene – now in the Rijksmuseum in Amsterdam — was not even exhibited in Paris at this time. Chaumelin’s high praise was, in fact, intended for Vrel’s street scene, which now belongs to the Getty Museum in Los Angeles (fig. 5). The realization that the street scenes attributed to Vermeer were actually by the hand of another artist was apparent only after close analysis of the signatures. First and foremost of these was the signature on the Amsterdam street scene (fig. 6), which was then in the possession of Théophile Thoré. The distinction of hands was further complicated by the fact that the initials ‘JV’ match those of Johannes Vermeer, and at least five of Vrel’s works feature apocryphal signatures with the names of other artists. Upon comparison with the outstanding quality of Vermeer’s works, one concluded that Vrel was a follower. But the only dated work by Vrel, now in the Kunsthistorisches Museum in Vienna, is dated 1654, providing evidence that Vrel was a predecessor to his more well-known contemporaries. 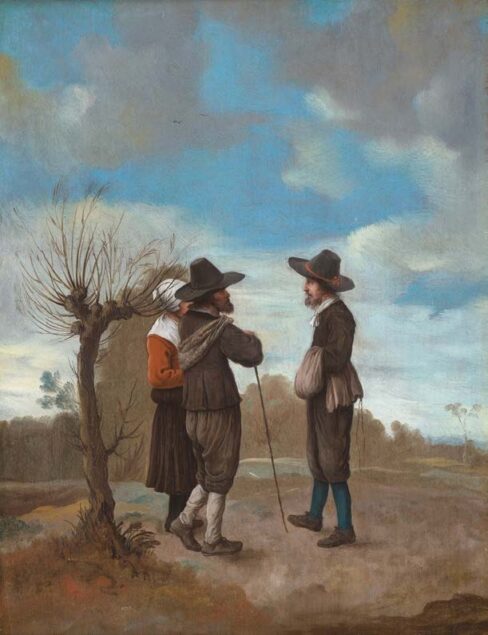 The recent dendochronological analysis of his works, painted without exception on wood, confirm this. This work was conducted as part of a multi-year, international research project with the Fondation Custodia, Collection Frits Lugt and the Mauritshuis in The Hague together with Professor Peter Klein. And there is even more. This analysis revealed that Vrel was likely already active in the 1630s, and the street scene acquired by the Alte Pinakothek is one of his earliest works. Vrel’s Street Scene with People Conversing could have been finished as early as the mid to late 1630s, and would therefore predate Vermeer’s street scene, executed in 1658-1660, by about 20 years. Vrel was therefore no imitator. On the contrary, he was a trailblazer! The current research advocating the advent of the cityscape genre in 1650 must now be re-examined.

The Munich picture is significant not only because it is one of his earliest works, but also because it is one of his most complex architectural scenes, and it provides a glimpse into an urban space. Narrow, lofty, multi-storied brick houses line an alley shoulder to shoulder. The sharply pitched roofs are covered with Dutch tiles. The facades are composed of cornices, alcoves and unusually elongated window openings. These windows are partially encased by whitewashed limework or furnished with simple wooden shutters. A muted palette and uniform distribution of daylight define the picture’s atmosphere. The white-washed windows and door frames with the red-brown and earth-colored facades provide the starkest contrast. At first glance, Vrel’s picture appears to represent an everyday scene in a Netherlandish city, as we would imagine it. But a comparison with the works of his contemporaries reveals that Vrel’s Street Scene with People Conversing is unusual. Unlike common depictions of cityscapes, Vrel does not employ a landscape format to provide an overall panoramic view. Instead, he selects the portrait format so that the narrow alleyway of multi-story houses appears like an urban canyon. The houses nearly fill the entire picture plane, eliminating any sense of depth. Only a small strip of an overcast sky slightly opens the composition to the top. With its overall closed character, the picture space recalls a theater stage, backdrop or film set. 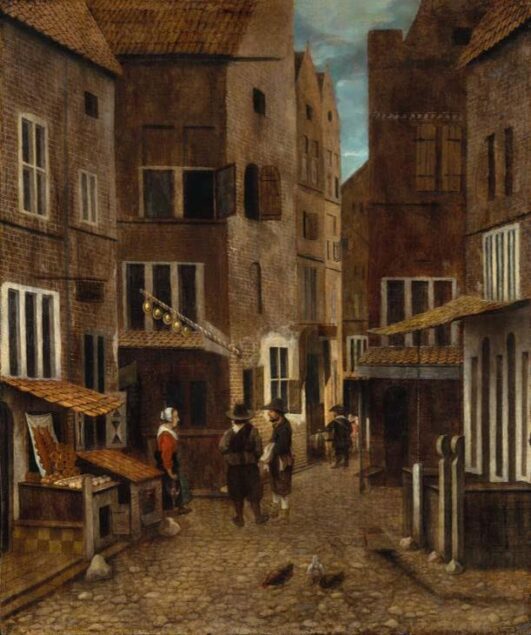 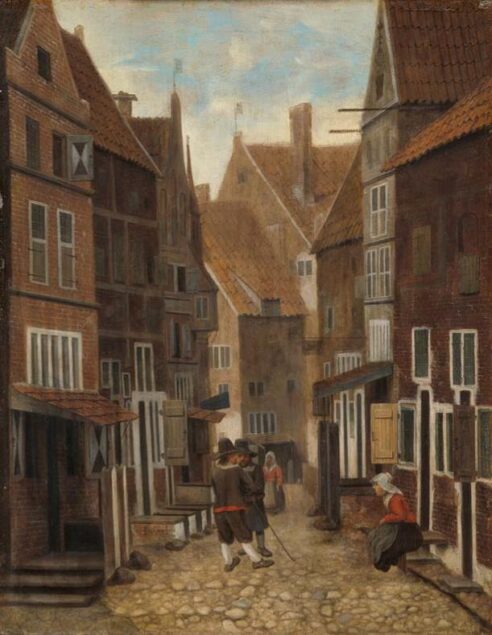 In juxtaposition with the influential cityscapes of the Berckheyde brothers or Jan van der Heyden, appearing much later in the 1660s, Vrel’s fine-toned cityscape would hold a special place in the Bavarian State Paintings Collections because Vrel is obviously not concerned with documenting specific, recognizable buildings and locations. With his anonymous, almost intimate urban spaces, Vrel produces an extraordinary, miraculous world. Atmospherically, however, Vrel’s Streetscene would pair even better with the church interior by Pieter Saenredam, or the seated figure of a woman reading from behind by Pieter Janssens, known as Elinga, and the finely-hued still life of Willem Kalf in one of the cabinet galleries. In any way that it is displayed, the painting represents an important piece of the puzzle in the collection and sharpens our understanding of the art of the seventeenth century, the various artists and the tastes of the patrons.

The desire to devote a monographic exhibition to this mysterious artist has matured over several years. Our deceased colleague Ekkehard Mai, at the Wallraf-Richartz Museum in Cologne, had also harbored such hopes. I found tireless comrades in Cécile Tainturier and Quentin Buvelot from the Fondation Custodia, Collection Frits Lugt in Paris and the Mauritshuis in The Hague, respectively. The three of us firmly believed in the success of a collaborative research project and three venue exhibition. Although the first exhibition venue in Munich had to be canceled due to Covid, the monographic presentation for 2023 in the Hague and Paris is fixed. The results of our combined international research project, undertaken in close cooperation with specialists in architectural history, building history and the history of costumes, as well as in handicrafts, folklore, the baker’s trade and religious studies come to fruition in the recent monograph, published in three languages with a catalogue raisonné of works.

The new acquisition is now prominently on display in the Great Hall of the Dutch Galleries of the Alte Pinakothek until 27 February 2022. This small exhibition is not merely a remnant of the major international exhibition project, but celebrates the new acquisition with proper fanfare. Regardless of the pandemic, such an acquisition would have posed a challenge for a public institution, and without the engagement of the Ernst von Siemens Kunststiftung, it would not have been possible. 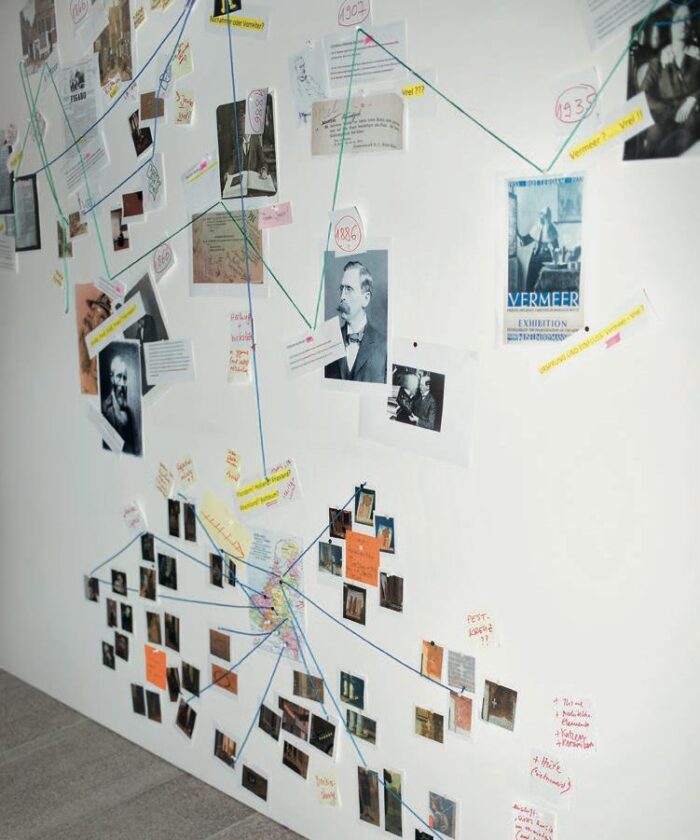 Fig. 7. Work in progress: research findings are posted on the investigation board (‘crazy wall’)

In order to bring this major work of the mysterious Jacobus Vrel to the greater public, the presentation is accompanied by extensive special events and educational programs. They include: a film series in theaters with introductions by art historians, originally conceived readings by Austrian actor, Jovita Dermota, workshops focused on the costumes, architecture and sounds of Vrel’s pictures, and a collaborative project in which roughly forty students from the Department of Literature, Arts and Media at the University of Konstanz produced a podcast series. Our exploratory booklet and paper craft cutout have been a real hit with the public, both of which invite the visitor to join the hunt and experience the miraculous world of Vrel!

Because one thing is certain: engaging with unknown masters off the beaten path provides unexpected and exciting discoveries, and not only for researchers. The task at hand was to lure the interested public and our stakeholders in early and allow them to take part in the journey and search for clues. Illustrating the complexity of the work process meant highlighting our successes as well as the dead ends (fig. 7). Because the case is not closed. The search for the ‘phantom’ Jacobus Vrel continues.

Bernd Ebert is Chief Curator of Dutch and German Baroque Painting at the Alte Pinakothek, Bayerische Staatsgemäldesammlungen in Munich. He has been a member of CODART since 2009. Further information on the current presentation in Munich can be found at https://www.pinakothek.de/vrel

1  The Dutch researcher, Jan Pacilly, unearthed this landscape, today still in the Kunsthistorisches Museum. Since the eighteenth century it has been attributed to the painter Johannes Lingelbach (1622–1674).

2 An eighteenth-century label is written in French on the reverse of the Street Scene with People Conversing in Munich. The label records an earlier attribution to Jan Steen and identifies the street as the one on which Steen lived in Leiden. It recounts apocryphal information taken from Houbraken’s Groote Schouburgh of 1721, in which the bakery illustrated on the left is the ‘Boutique de Boatz’, the same bakery which supplied Steen and his family with bread. The label also identifies the figure in black wearing a hat in the background as Steen himself.