This article was first published in the CODART eZine, no. 3 Summer 2013

It is perhaps a little unexpected that the small town of Schwerin in north-eastern Germany should house one of the richest collections of Dutch and Flemish paintings in the country. The holdings of the Staatliches Museum Schwerin, which are not restricted to paintings, are the result of efforts by the dukes and later grand dukes of Mecklenburg-Schwerin to bring together art collections befitting their status. As dukes they were among the highest-ranking nobles in the Holy Roman Empire, despite only ruling over a poor and remote region. 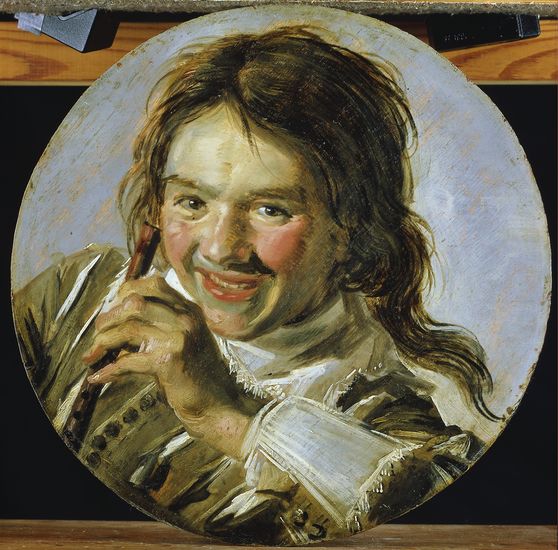 The Schwerin museum, together with the three residential palaces of the dukes of Mecklenburg in Schwerin, Güstrow and Ludwigslust, offers a number of different views into these varied collections. They were largely formed around the middle of the eighteenth century by Duke Christian Ludwig. Other areas of collecting were added in the nineteenth century. Apart from a few dozen Greek vases, the collections today span several hundred years from the late middle ages to the modern day. They include the collection of paintings, which now amounts to almost 4,000 works, sculptures, some 60,000 prints and drawings, more than 10,000 works of applied art in the form of porcelain from Meissen, Prussia and other manufacturing centres, ivory carvings, wax reliefs, cork carvings, tapestries, glass, a large collection of clocks, weapons, and around 32,000 coins and medals. Although the holdings of medieval art from the region, which were assembled in the nineteenth century, are substantial, and the acquisition of a collection of works by Marcel Duchamp in 1997 gave the museum some publicity, even today the old collections are not only the core of the museum’s holdings in terms of quality but have contributed more paintings than more recent acquisitions. Apart from a few dozen French pictures (most notably the hunting scenes and animal portraits by Jean-Baptiste Oudry), as well as some Italian, early German and early Netherlandish ones, the museum’s reputation still centres around the approximately 600 Dutch and Flemish paintings of the seventeenth and eighteenth centuries. This part of the collection grew little in the nineteenth century, and not at all in the twentieth, and as a result it still by and large resembles the holdings of the ducal gallery in the eighteenth century. It is the limited outlook of three centuries ago, so different from the restrictions of our own time, that comes alive when one browses the collection. It lacks most of the first names of today’s canon, apart from one painting by Jacob Jordaens and another by Rubens (the latter acquired in the 1850s). Van Dyck as well as Rembrandt and Vermeer are completely absent, while two small genre pieces by Frans Hals have luckily been preserved, despite being foreign to the dukes’ tastes. The founder of the picture gallery, Duke Christian Ludwig (who died in 1756) reflected the taste of his times in his love of Willem van Aelst, Gerard de Lairesse, the van Mieris family and Ludolf Bakhuysen. He competed with the big collectors of his day, Wilhelm of Hessen-Kassel, the Palatine Elector, and the kings of Poland and Prussia, for paintings by Gerard Dou and Gottfried Schalcken, Philips Wouwerman and Nicolaes Berchem. 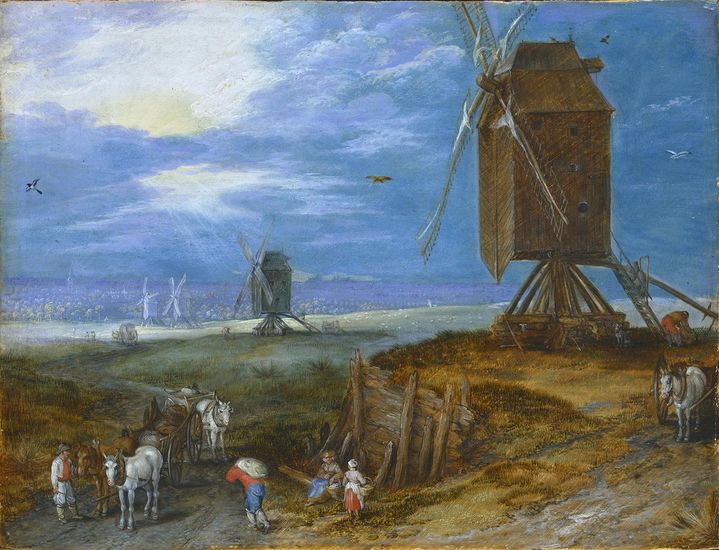 So the expectations of today’s public cannot be met completely. Although the collection has its strengths – especially in genre and landscape painting – it cannot present the entire picture of the Golden Age according to today’s canon. Most notably, the early masters are missing, and even more so are the great masters of the Antwerp school (despite the presence of three Jan Brueghels). That said, the museum can still offer glimpses into the Golden Age that provide surprising insights. Still lifes, in particular, document almost the whole history of the genre, from a rare Roelant Savery to five glorious pieces by Jan van Huysum. Genre painting, the so-called everyday scenes, and probably the best-loved subject matter of Dutch painting, include The Sentry by Carel Fabritius, which is world-famed for its quality and the rarity of the artist’s work (only 13 paintings are known). Three pictures by Gerard Dou and three by Frans van Mieris the Elder lead the holdings of the Leiden fijnschilders who were so dear to the eighteenth century. Works by Adriaen van der Werff and Godfried Schalcken represent the late flowering of that style. The conflicting idiom epitomized by Rembrandt was also collected. Since a full dozen of the paintings that were bought as works by him had to be reattributed to other artists later, it is not Rembrandt that the collection documents but his impact on other painters. 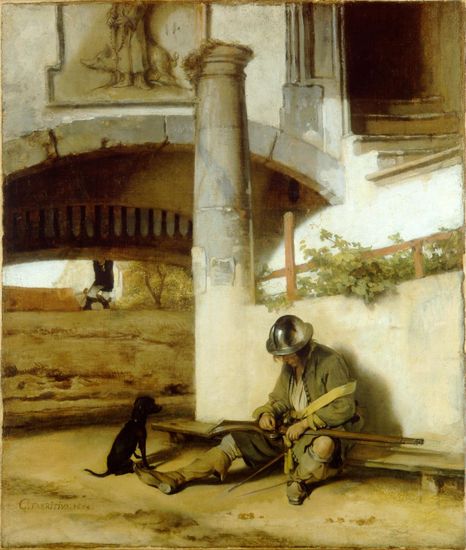 Other highlights of the collection include a large panel by Hendrick Avercamp, one of his winter landscapes with skaters on a frozen river, some beautiful examples of the Haarlem peasant painters with an early Adriaen Brouwer, a poetic Adriaen van Ostade and an interior by Jan Miense Molenaer. No fewer than five works by Paulus Potter are a triumph in themselves. Italianate painting is also strongly represented, in accordance with the taste of the early collectors. A large canvas by Nicolaes Berchem shows the ruins of Brederode Castle bathed in southern light in a campagna-like landscape. There are also good works by Jan Both, Jan Baptist Weenix, Jan Asselijn and a number of their followers.

The last critical catalogue of the Old Master paintings dates from 1882, when the grand-ducal museum, one of the celebrated museum buildings of that era, was first opened. A new catalogue raisonné of the Dutch and Flemish paintings is currently being prepared in installments. Three parts of a planned five-part catalogue have been published since 2000, covering still lifes, Flemish paintings and genre scenes. 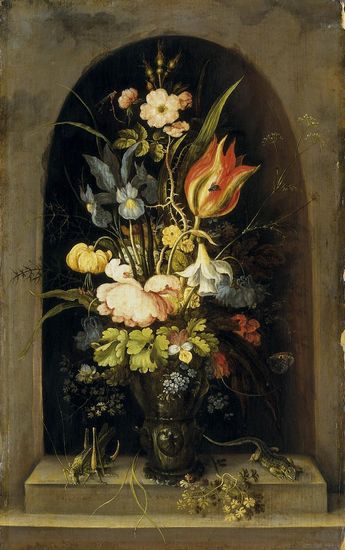 The particular appeal of the museum building and its much older collections has attracted the private collector Christoph Müller to add his fine collection of more than 150 paintings by minor Dutch and Flemish masters. In numbers, this is the largest donation of Old Master paintings ever to be given to a public museum in Germany. It does not bring the highly desired Pieter de Hooch to the Schwerin museum, nor Jacob van Ruisdael, much less the Rembrandt it lacks. But it will add a number of names to the collection that cannot be found in any other German museum (Claes Bergoijs, Hubert van Ravesteyn, Justus de Verwer and Claes Claesz Wou, for instance). Furthermore, it does include a number of highlights in itself, for instance a large Simon de Vlieger that was once part of the Chernin Collection (bringing the museum’s total number of paintings by the master to five), a spectacular, large Pieter Gysels, and a wonderful Joos de Momper – both names that were hitherto missing in Schwerin.

Apart from exhibitions focusing on particular parts of the holdings, the museum has put a great deal of effort into working on joint exhibitions with Dutch museums, and this has been greatly enhanced by the CODART network. The first of these presented the complete oeuvre of Carel Fabritius in the Mauritshuis in The Hague and in Schwerin in 2004/2005. In 2007 a joint venture with the Frans Hals Museum showed the work of Nicolaes Berchem in Haarlem, Zürich and Schwerin. In 2012 a show devised by the Utrecht Centraal Museum together with Schwerin was devoted to Abraham Bloemaert, for the first time ever showing a representative selection of his paintings, drawings and prints. The museum is striving to carry on this successful sequence of collaborations as well as strengthening its efforts to highlight its own collections.

Gero Seelig is Curator of Netherlandish paintings at the Staatliches Museum Schwerin, Germany. He has been a member of CODART since 2001.