The Residenzgalerie Salzburg (since 2016 part of the large DomQuartier museum complex in Salzburg) contains Salzburgerland’s Old Masters collection. Dutch and Flemish artists, works by Italian, French, German and of course Austrian painters display a representative cross-section of European painting from the sixteenth to the nineteenth century. The dominant presence in this collection is undoubtedly that of Dutch painting.

Rembrandt’s painting Old Woman Praying (inv. no. 549, Corpus A27) is the museum’s most valuable and exceptional work of art, purchased from the former Czernin collection in 1980 and therefore protected by the law of preservation of ancient monuments. 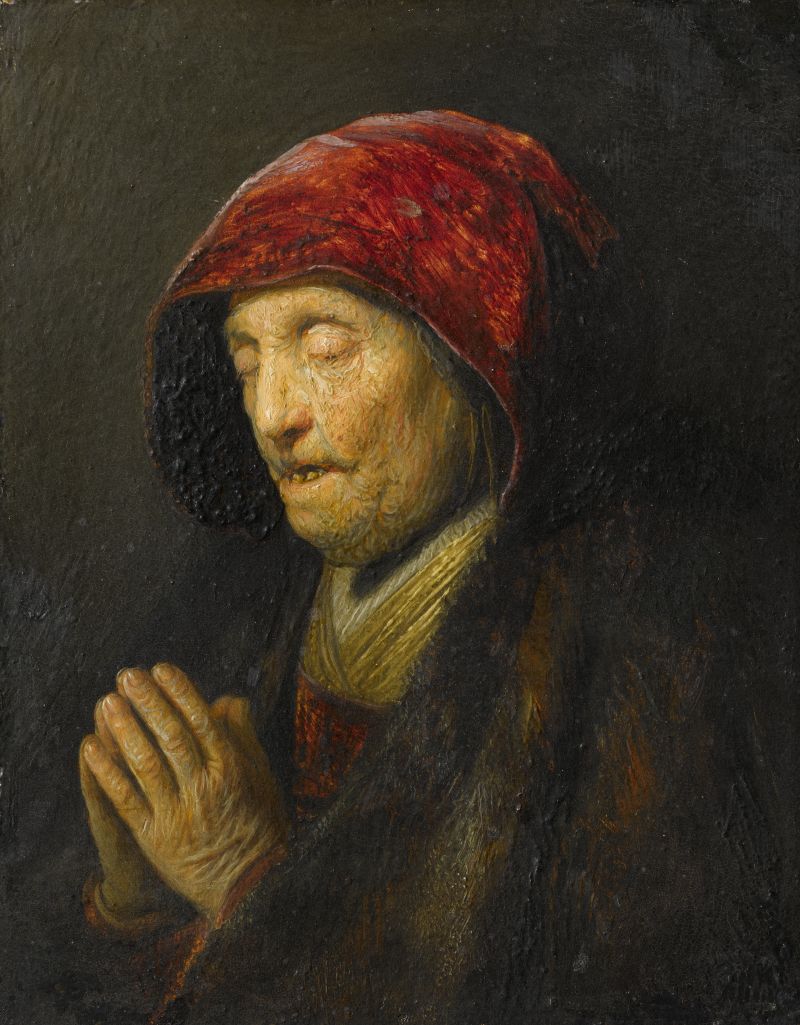 The Residenzgalerie Research Office, established at the beginning of 2017, is responsible for conducting basic research on the Old Masters collection. The scientific project involving research on the Dutch paintings in the collection began with the examination of the Rembrandt painting in 2016, using non-destructive and non-invasive methods supported by raw data from Visual Media and Corporate Design (Kunsthistorisches Museum Vienna) and XGLab (Milan), combined with the analyses of the research partners Martina Griesser and Katharina Uhlir (Conservation Science Department, Kunsthistorisches Museum Vienna). These analyses enable us to take a look beneath the paint layers – in other words, “under the skin” of Rembrandt’s painting. The technical examinations of Old Woman Praying, using X-ray spectrography and infra-red reflectography, provide important data from which we can draw conclusions about its genesis. These research methods document the choice of pigments and the master’s initial thoughts and ideas by revealing the original sketch, which was later abandoned.

The painting Old Woman Praying, also known as Rembrandt’s Mother, is a character study, a tronie. The empathy evinced by the artist in his portrayal of the model is exceptional. It is also a distinctive work by virtue of the technique used. Painted on a gilded copper plate, it demonstrates the artist’s outstanding technical skill. For the paintings he made in Leiden, Rembrandt used almost exclusively oak panels as supports. Just one painting on paper and only five on copper plates are known (see Van de Wetering, 2009, p.12f.), three of the latter with an undercoat of gold leaf. So the Salzburg painting probably belongs to a series of three small-scale tronies of almost identical size. Besides Old Woman Praying, the other two paintings in the series consist of one in the collection of the Mauritshuis, The Hague (Laughing Man, inv. no. 598; Corpus B5) and one at the Nationalmuseum Stockholm (Young Man/Self-portrait, inv. no. 5324, Corpus B6). 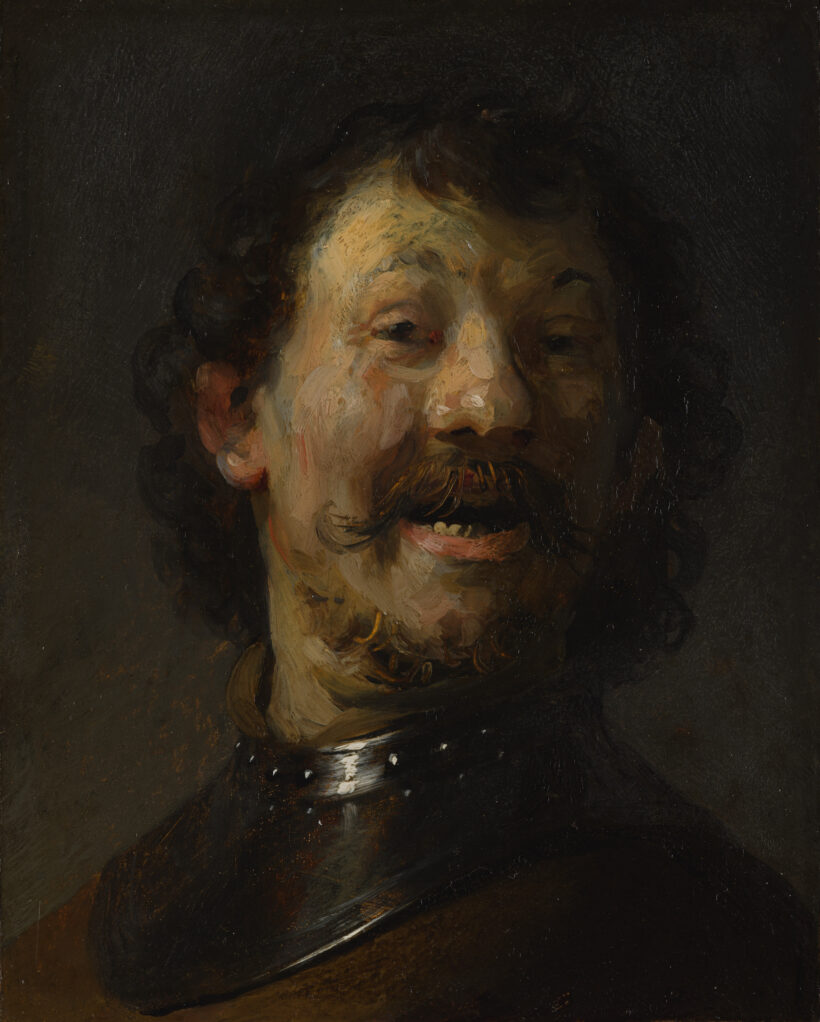 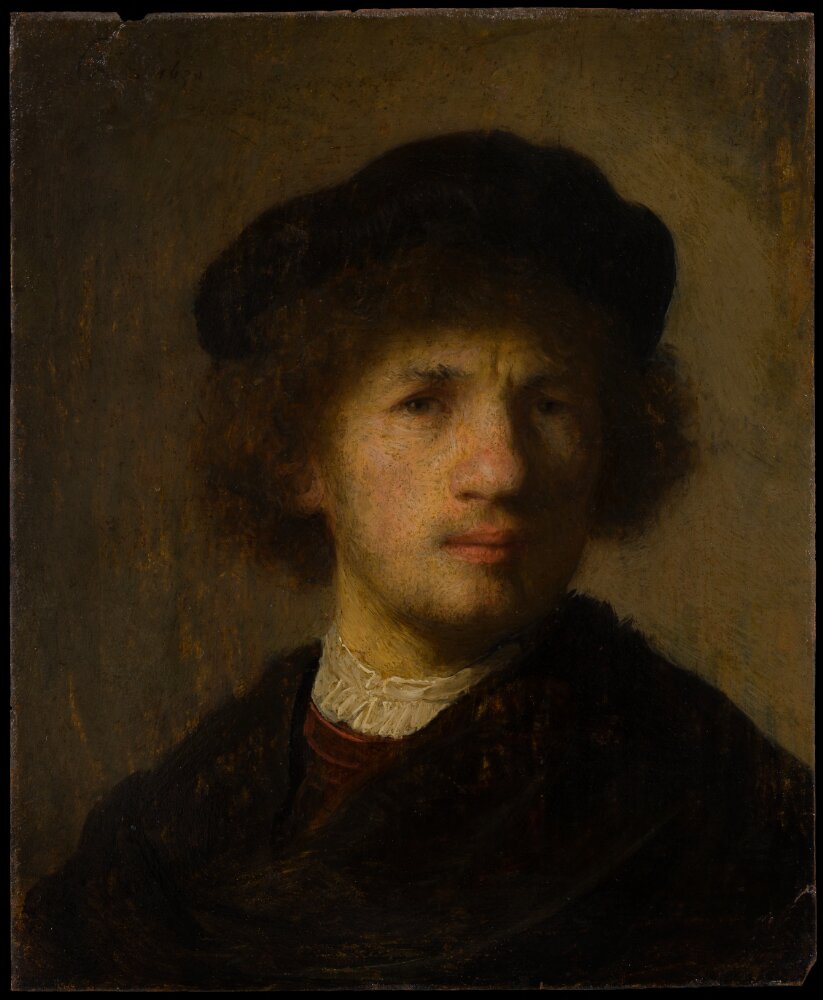 In the Baroque era – especially the late baroque – painting on copper was very popular because of its smooth, enamel-like character, which produced a quality resembling a miniature. Copper plates give the paint a special luminosity. Another reason for the gold ground might have been a purely technical consideration on the artist’s part: this precious metal does not oxidize – that is, it does not react with oxygen. The first eight or nine years after Rembrandt’s training were years of exploring new painting techniques and styles. It therefore seems likely that this small painting was a technical and aesthetic experiment. He never returned to this technique in his Amsterdam era.

The IRR shows sporadic lines of a sketch containing carbon. Most obvious are the two curved lines around the mouth, meeting at a point. Another rather more prominent, if shorter, line runs obliquely over the hood. The positioning of the lines seems very strange, and at first glance it is unclear what function they serve.  Nonetheless, if we look at the two curved lines around the mouth and take the upper line as denoting the intended position of the chin, the upper oblique line of the underdrawing automatically becomes the new lower end of the hood over the forehead. In other words, the figure has been shifted within the pictorial space. 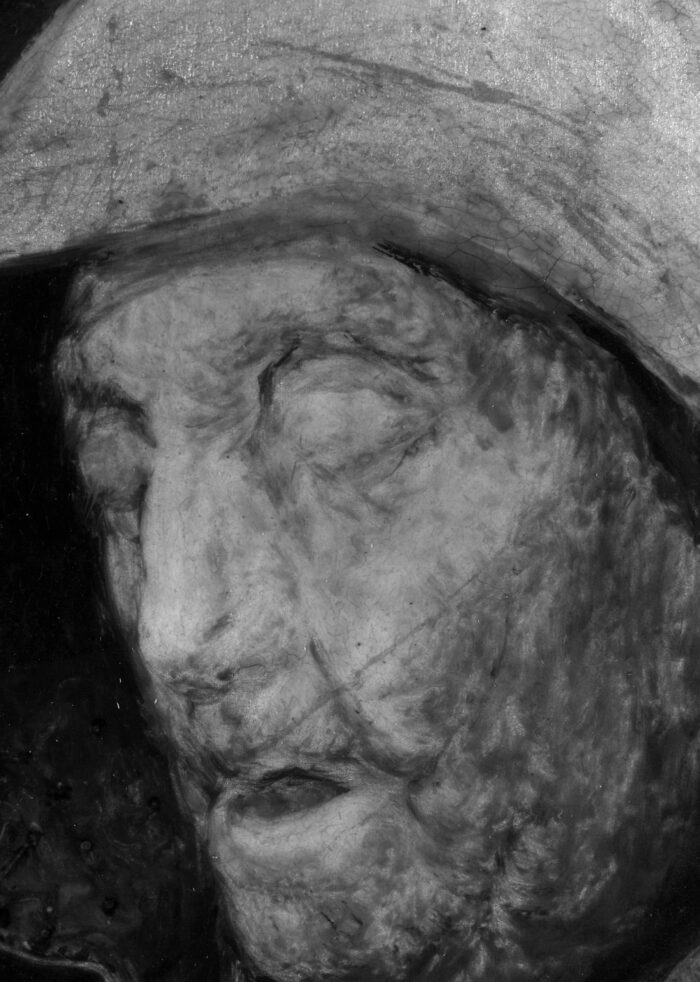 According to the original design, the figure of the praying woman would have been considerably closer to the upper edge of the picture. Why Rembrandt ultimately decided against this version – in which the figure would have appeared more powerful and with more presence – is a matter of conjecture. The dominant dark area of the brown fur mantle would have oversimplified the composition. In the end, the artist’s decision to shift the figure downwards served to accentuate his preferred asymmetry and thus to reduce the woman’s presence, so that her introverted appearance is closer to the intended iconography of contemplation.

This copper plate coated with gold leaf is extremely thin. It is about 1 mm thick, between 15 and 15.5 cm high and 12.2 cm wide. On the front of the copper plate, abrasions at the edges under the frame reveal the layers of copper, gold leaf, paint and varnish. Copper can react with resin and oil containing binding agents, resulting in greenish reaction products, which are common in painted copper panels and cause the occasional flaking of the paint film. Due to environmental influences, the unprotected backs of Rembrandt’s copper plates are greenish. The reddish-brown patina formed with the passage of time makes the copper plate look very blotchy, with greenish oxidation.

Exceptionally, Rembrandt coated the copper plate with very thin gold leaf. As already noted, he spent eight or nine years exploring new painting techniques and styles after completing his training. He (or possibly his workshop) probably executed the gilding himself, since this layer seems to have been consciously manipulated. He had previously mastered the technical means to bind the gold to the copper, absorb moisture and avoid other chemical reactions between the metal layers.

The first layer, applied directly onto the copper, is generally – as in any painting – a primer. In line with the common use of red bole gilding in panel painting, and probably in order to cover up irregularities in the beaten copper plate, artists usually used a lead white primer. A thin layer of lead white, of which took on a greenish tinge, applied directly onto the copper, was completely covered with gold leaf.

Earlier technical research on the other two paintings in the series – in The Hague and Stockholm – involved sampling and examination of the paint layers. This research led to the conclusion that a lead white layer (grey, containing charcoal black, some earth pigments and probably smalt) was applied directly onto the copper plate, after which the gold was applied over this primer (Froentjes, 1969, pp. 233ff.).

In the painting Old Woman Praying, X-ray fluorescence spectrography established no detectable elements between copper and gold. The gold leaf was probably not applied with a poliment of white lead or bole. As organic substances cannot be detected by XRF, it is reasonable to assume that the surface was painted in oil. Old recipes for painting technique propose – besides shellac and gum arabic – the use of garlic and onion juice, as well as camphor for better adhesion. The white lead that was found served mainly to lighten the colors in the areas of reflected light, and is only on top of the gold leaf.

The most obvious reason for using an additional metallic layer on the copper support is the artist’s probable intention of integrating the gold tint into the color concept of the picture in order to enhance the luster. Rembrandt’s translucent glazes (madder) and his method of scratching into the wet paint with the tip of the brush handle reveal gold leaf in many parts of the painting. As we can see today, under at least two coats of old varnish, reflection from the metal lends considerably less luminosity than it may be assumed to have had at the time of painting. Subsequent darkening of the colors and their increased opacity, both natural reactions over time, are additional factors for a change in perception. A further reason for the gold ground may have been a purely technical consideration by the artist: the precious metal gold is inert: it does not react with oxygen and thus does not oxidize.

These observations make it clear that Rembrandt’s primary focus was on the variety of technical possibilities offered by gold. For instance, he could use the red-gold nuance to enhance the reflections of highlighted areas. The evidence suggests that he regarded gold as an additional color or illuminant in his compositions. Nevertheless, apart from the increased market value of the painting, one is tempted to associate gold in the painting of the Old Woman Praying with the iconography of the subject. Rembrandt takes up the tradition of the predominantly immaterial quality of gold as a symbol of spirituality, transcendental beauty and hence mythological idealization. Through his use of gold – possibly the material that uniquely epitomizes the duality of sensuous materiality and spiritual immateriality – Rembrandt provides tangible evidence of this ambivalence. 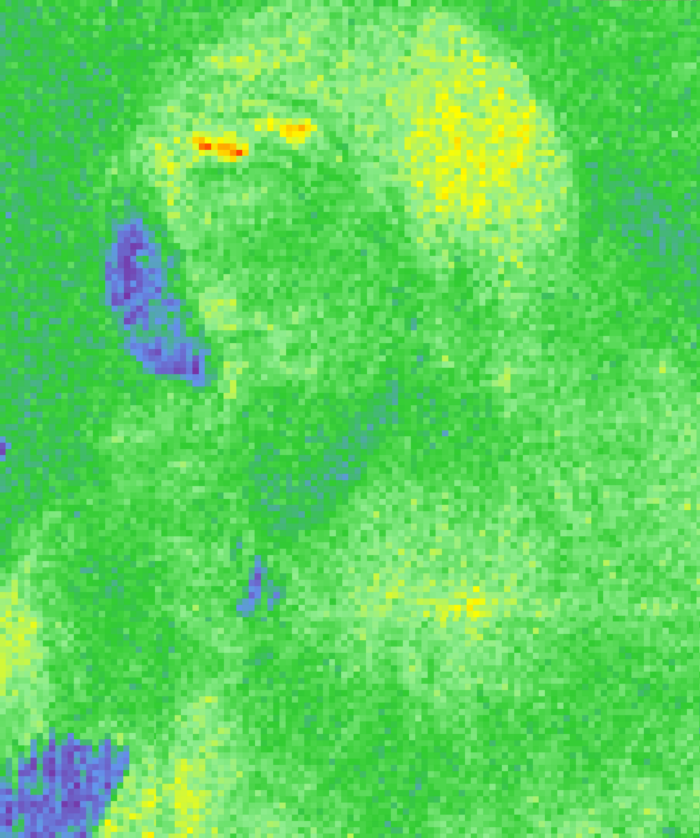 The latest results of the XRF examinations, however, show that the gold leaf is missing in a few places. There are three quite distinct points at which the X-rays show no gold coating. When pressing and wiping the thin gold leaf, usually with wool or a rabbit’s foot, gold material would often be accidentally removed. Since no white lead was used in those places, copper can be detected immediately under the paint in the X-ray fluorescence image. The missing gold in the hood, on the left next to the face, seems interesting. Since the area where the gold is missing follows exactly the kidney-shaped form of the shadowed inner side of the hood, and no retouch is perceptible, it seems extremely likely that the gold leaf here was deliberately removed by the artist. If we look at the picture as a whole, we realize that here, next to the light flesh tones – the main focus of the painting – is the deepest black. So what could be more likely than that the gold, used in all the rest of the painting as a light-enhancer, was completely removed here in order to achieve the deepest, dullest black possible, eliminating any light or luster. Thus Rembrandt demonstrates the intensity with which he studied the available materials in order to achieve the best possible rendering of his concept of complex chiaroscuro painting.

Dr. Gabriele Groschner is Research Policy Officer of the Collection of the Residenzgalerie in Salzburg, Austria. She has been a member of CODART since 2015.