This article was originally published in the CODART eZine, no. 4 Summer 2014

Eighteenth-century Netherlandish drawings from the collection of Jean de Grez, to be exhibited at the Koninklijke Musea voor Schone Kunsten van België (Royal Museums of Fine Arts in Belgium) in 2016

After the 2007 exhibition on the seventeenth-century Gouden Eeuw (Golden Age), this show will highlight the eighteenth century. Under the enthusiastic and expert supervision of Charles Dumas, senior curator of the RKD (Netherlands Institute for Art History), and Robert-Jan te Rijdt, curator of drawings at the Rijksmuseum, an informed selection was made of eighty outstanding drawings which span an entire century and show the fascinating diversity of subjects and techniques that are typical of the eighteenth century.

Collecting prints and drawings became more popular in the eighteenth century than ever before, since the prevailing fashion of decorating rooms with hand-painted wallpaper resulted in a sharp drop in the demand for paintings. In 1772 the Amsterdam art lover Cornelis Ploos van Amstel pointed out yet another reason: “Drawings, just like prints, can be gathered together compactly and put away, so that a single art book or album can contain an entire cabinet of the most delightful drawings and prints.” It is hardly surprising that Jean de Grez’s collection is a prime example of such “delightful” holdings, consisting of approximately 1,200 sheets dating from the eighteenth century.

The core of this family treasure was collected by Arnoldus Josephus Ingen Housz of Breda, who was born in 1766 and was therefore a contemporary of many of the artists represented in this exhibition. After Ingen Housz, his nephew Josephus de Grez (Breda 1817 – Ginniken 1902) continued to enlarge the collection until his death in 1902, when it came into the hands of his nephew: the knight Johan (Jean) Marie Hendrik Joseph de Grez. After enjoying the collection for barely eight years, Jean de Grez died on 18 September 1910 in Brussels, where he had moved from Breda. In accordance with De Grez’s wishes, his wife, Gertrude Marie Mahie, donated the collection to Belgium in 1911. Of the 4,250 pieces in the collection, which consists of drawings from the sixteenth to the nineteenth centuries, approximately 3,600 sheets belong to the Netherlandish School.

The oldest drawing in the exhibition is by Gerard de Lairesse, a native of Liège who settled in Amsterdam. Although his drawing Ecce Homo stems wholly from the seventeenth century, it is perfectly at home in this exhibition because De Lairesse’s academic classicism defined history painting until well into the first half of the eighteenth century. In Amsterdam his influence was apparent in the work of Nicolaas Verkolje, whose drawing of a Young Couple Accompanied by Putti (fig. 1) is presented here for the first time. The same movement is represented by the Leiden fijnschilder Willem van Mieris, who frequently drew on both blue paper and parchment, as shown by the two drawings selected for this exhibition, particularly the highly refined Death of Cleopatra (fig. 2). 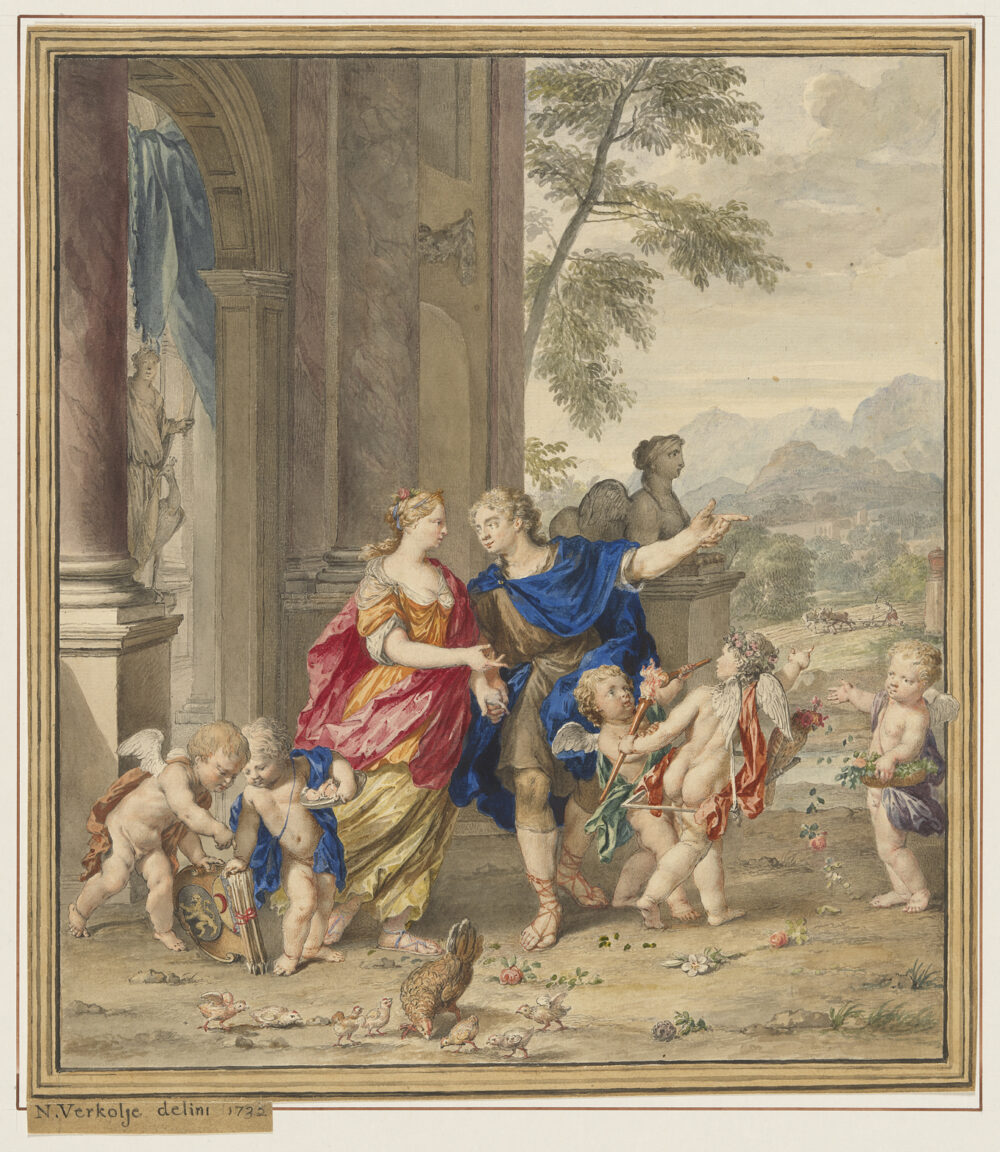 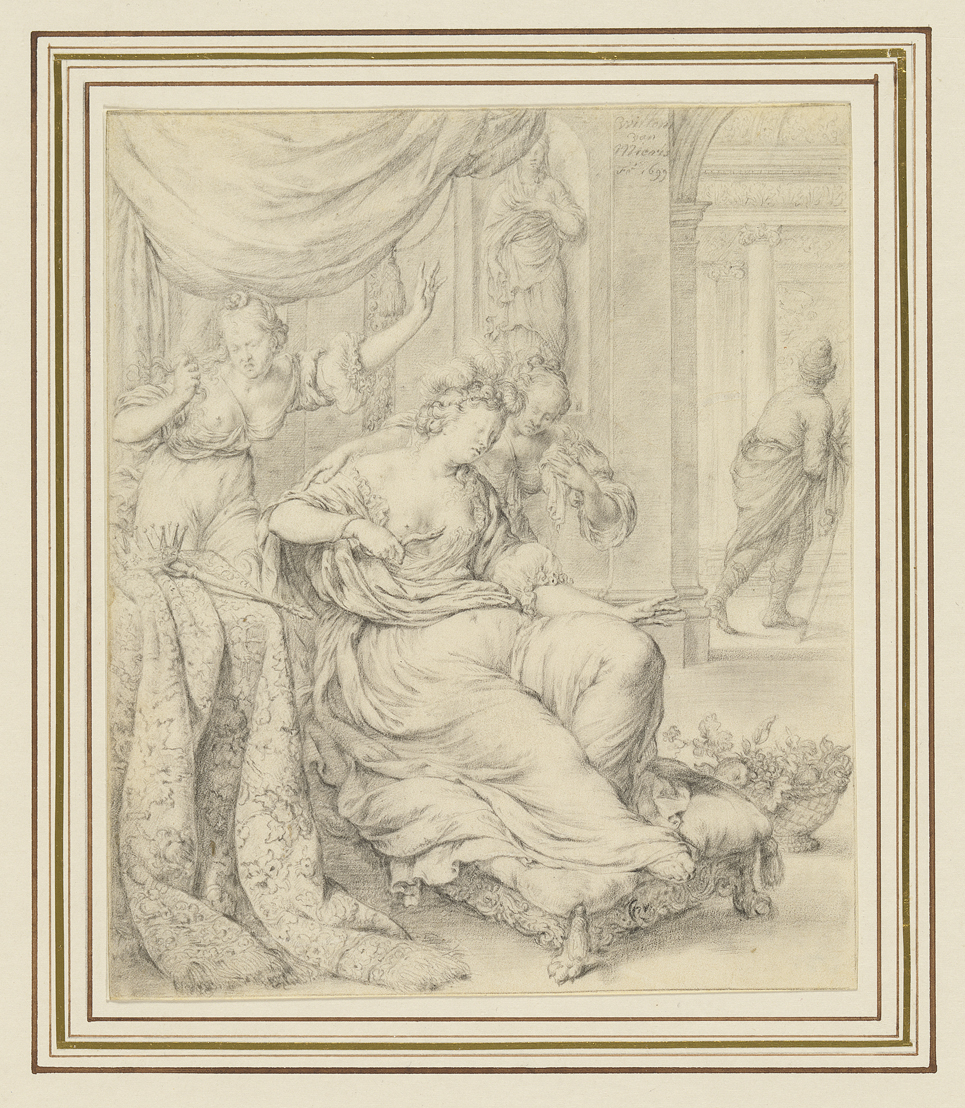 Such scenes from classical history were extremely popular, as were mythological representations and allegories, in the form of cabinet pieces as well as ceiling paintings, overmantels and painted wallpaper. Patricians and merchants who had grown wealthy spent a great deal of money on their town houses and country estates, pursuing an elegant lifestyle in keeping with their standing. France, despite the political and military threat it posed under Louis XIV, was the pre-eminent example in the cultural sphere. Jacob de Wit, in particular, managed to attract many patrons with his light-hearted, decorative compositions executed in bright colors. In 1728 he painted an overmantel for the widow of Gerardt Schaep; it depicted the theme of Paris and Oenone, and its perfectly worked-out design is included in this exhibition. De Wit also painted monochrome imitations of bas-reliefs in plaster, wood and marble: so-called “witjes” for which he frequently made study sketches. The design chosen for the exhibition, in which the putti symbolize Autumn, illustrates his astounding skill. The selection also contains a vigorous sketch for a history painting of Moses and the Brazen Serpent, and splendid designs for the allegorical female figures of Poetry and Painting, which De Wit executed in grisaille in the garden house of his premises on the Keizersgracht.

The prevailing taste in those days favored an idealized world, as a result of which many canal-side houses were decorated with Italianate landscapes featuring architectural elements derived from classical antiquity. An important painter of such scenes was Isaac de Moucheron, who made drawings of well-known sites and buildings during his stay in Bologna, Rome and Tivoli from 1694 to 1697. The views selected for this exhibition, representing the Ripa Grande and the Castel Sant’Angelo (fig. 3), combine topographic precision with a balanced composition. Back in Amsterdam, Isaac elaborated upon the sketches he had made in Italy and produced magnificent watercolors such as those chosen for this show, which illustrate his exceptional talent as a colorist. 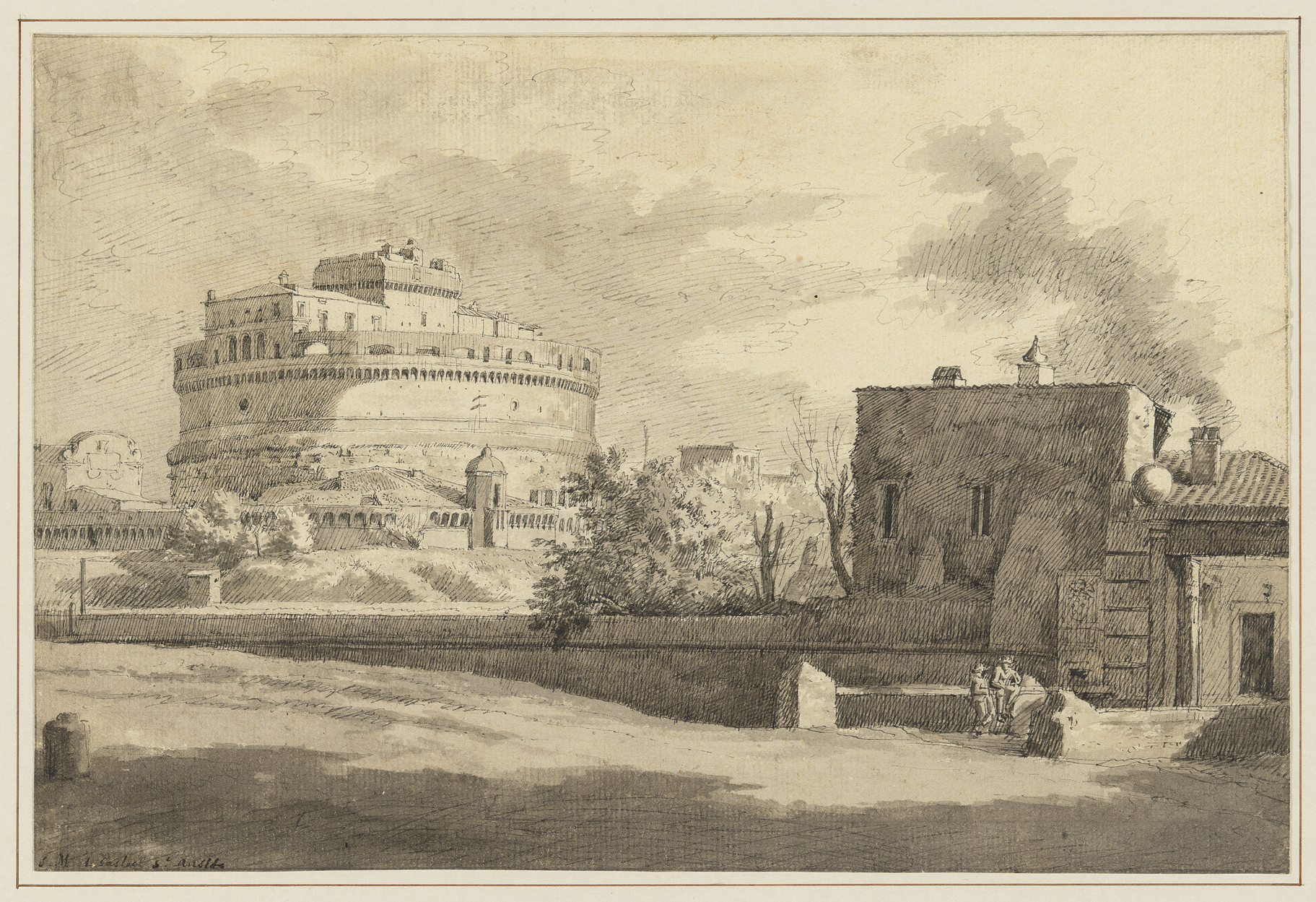 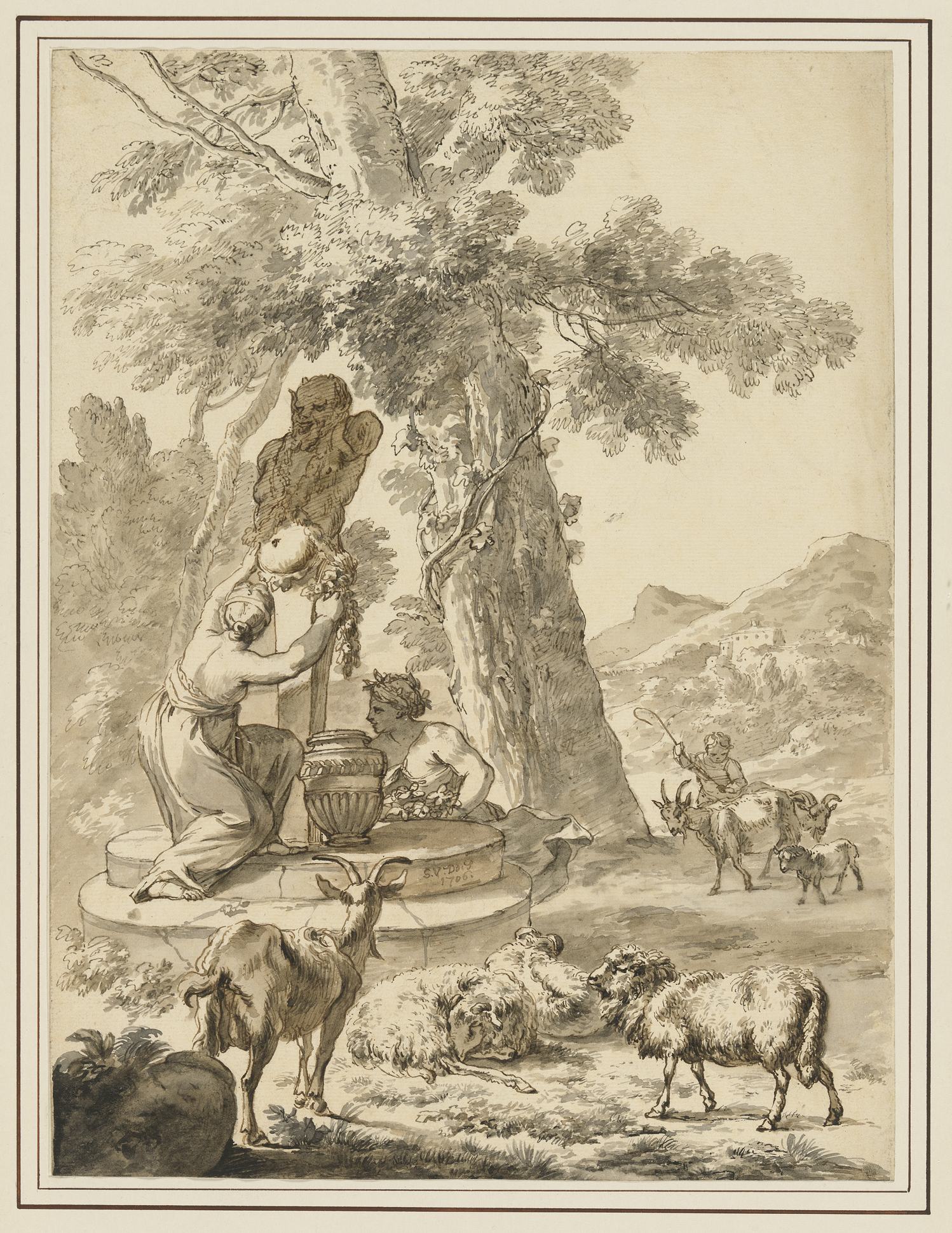 The image of Arcadia as a charming, unspoiled place – the perfect setting for the pastoral life – is represented in the exhibition not only by the work of De Moucheron, but also by two unpublished pendant drawings by Simon van der Does (fig. 4), who was long active in The Hague, and by two gouaches by Abraham Rademaker, who – according to his biographer, Johan van Gool – had much success with such gems. The Amsterdam painter Jean Grandjean managed to rise above the influence of De Moucheron after traveling to Rome himself in 1779 – the first Netherlandish artist of the eighteenth century to do so. His monumental View of the Via Tiburtina below the so-called Villa of Maecenas at Tivoli reveals a plainly lyrical, almost pre-romantic approach.

Around the mid-eighteenth century, public taste shifted from the idealized landscape to real-life settings. This was due in part to the popularization of scientific investigation, which was stimulated by the publication of encyclopedias, through which the French ideals of the Enlightenment became more widely accepted. Moreover, by the early eighteenth century it had become obvious that the Dutch Republic had played out its role on the international stage and that the country – thrown back on itself – was forced to seek its fortune within its borders. This explains both the admiration of the Dutch for the beauty of their own country – a sentiment that was much stronger in the Dutch Republic than elsewhere – and the enormous production of painted and especially drawn landscapes, as well as views, intended for the domestic market, of towns, villages, country estates and castles. It also clarifies the predominance in this exhibition of topographical views by Cornelis Pronk, Jacob van Liender, Jan de Beijer, Paulus Constantijn La Fargue, Dirk Verrijk and Anthonie Andriessen. The work of Paulus van Liender, who was influenced by Pronk and De Beijer, is represented in this show by his early View of IJsselstein and an unpublished late wooded landscape (fig. 5), one of the high points of his career. A drawing by his pupil Hermanus Petrus Schouten – the View of the Almoners’ Orphanage in Amsterdam, a pen-and-ink drawing previously known only from a print – is also included in the exhibition. 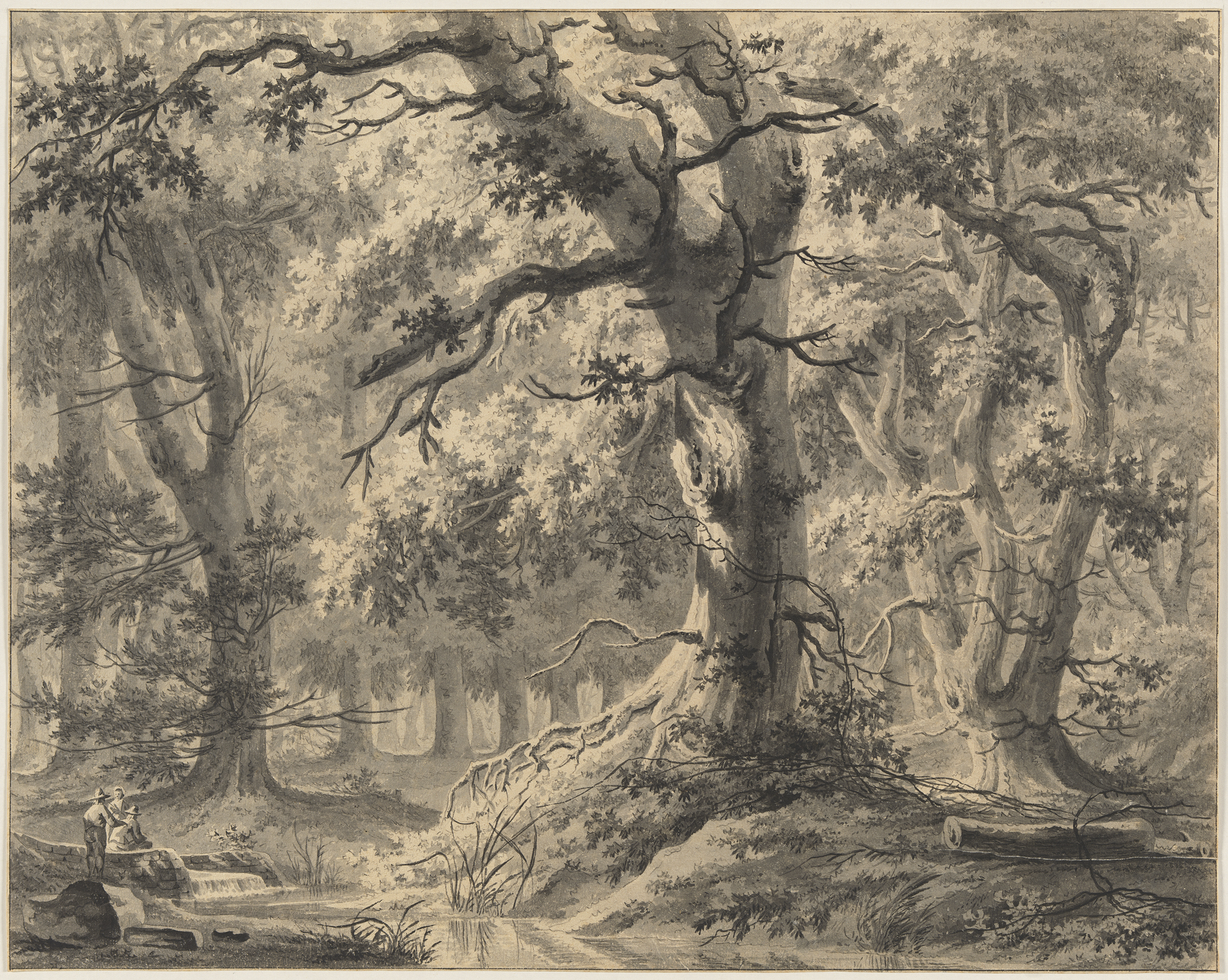 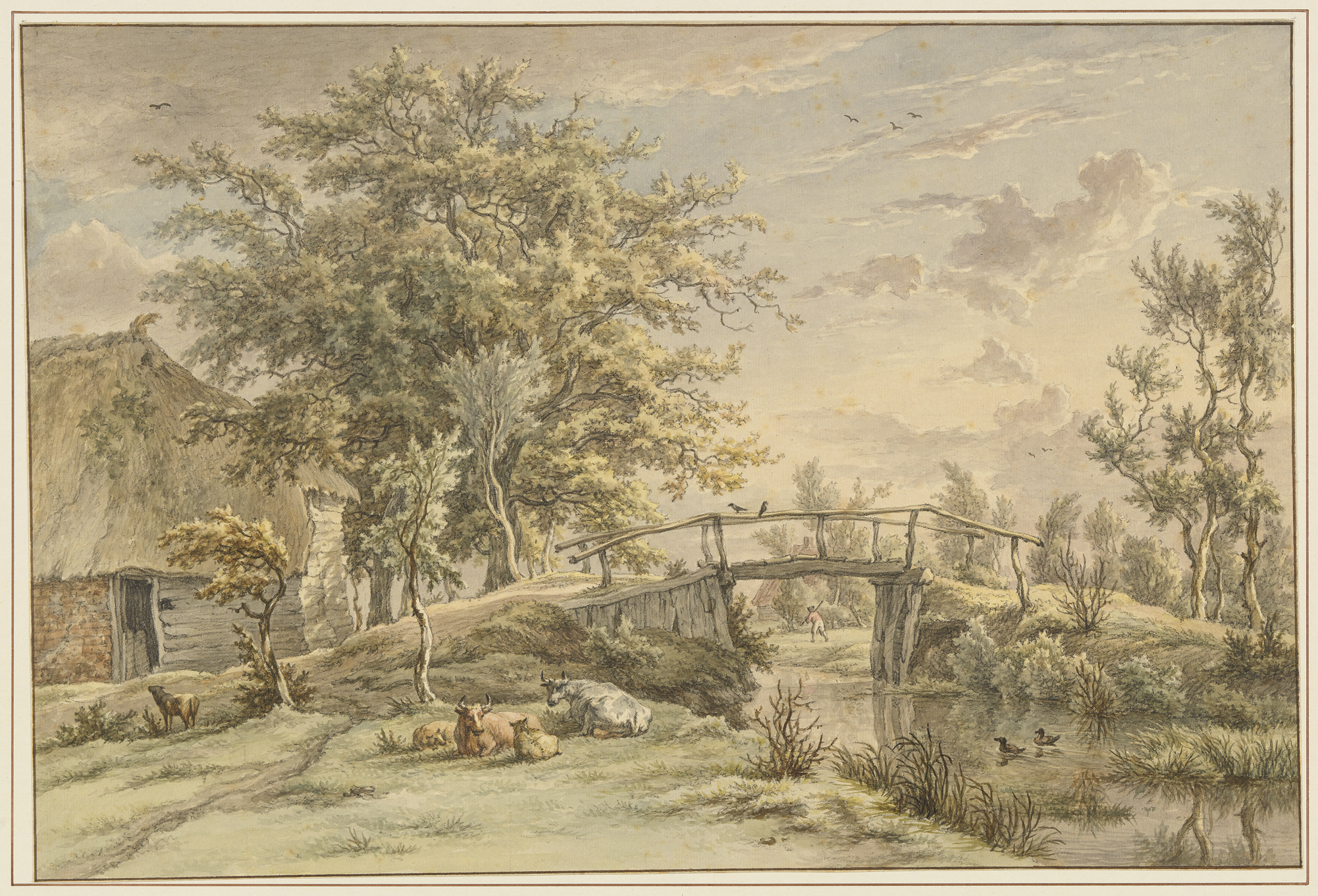 As the century progressed, the national consciousness grew, and this resulted in a reassessment of seventeenth-century Dutch painting. The artist Egbert van Drielst, for instance, by whom three sheets will be presented (fig. 6), based his work both on the old masters, such as Jacob van Ruisdael and Meindert Hobbema, and on his careful study of nature, undertaken mainly on his annual drawing expeditions to Drenthe. His contemporary and friend Jacob Cats, on the other hand, relied on his recollections of the landscape of the Gooi or Gelderland, handily designing winter views and drawings of the four seasons and furnishing them with lively details. A very dynamic sketch by the Dordrecht artist Jacob van Strij is also included (fig. 7). 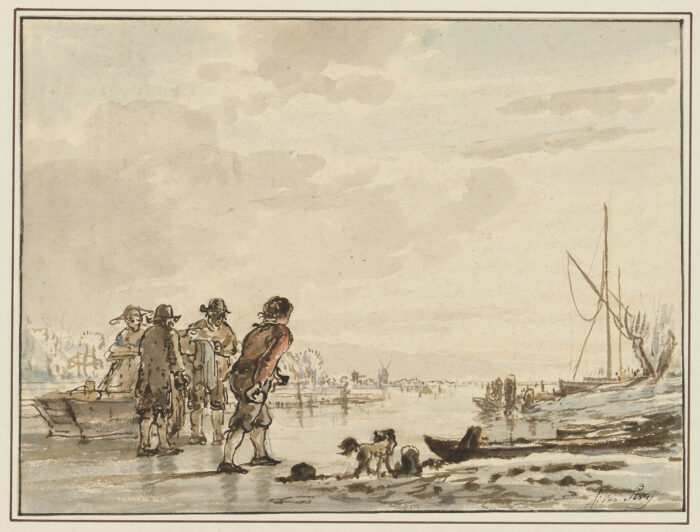 Much of the final drawing deviates from the underdrawing, and it may well be a rare nature study by this artist. Other landscapes by Van Strij that have been selected for the exhibition recall the seventeenth-century masters Albert Cuyp and Anthonie van Borssom. The latter is also referred to in the hushed View of a Frozen River with Skaters by Anthonie Erkelens, long thought to be an artist from the circle of Rembrandt. Jan Baptist Kobell’s Farmstead with Sheep and Cows betrays his admiration of the seventeenth-century cattle painter Hendrik Potter. Art lovers of that time shared this admiration for the old masters and eagerly bought color drawings made after famous paintings, such as the seascapes by Nicolaas Muys after Willem van de Velde the Younger.

The exhibition also focuses on late-eighteenth-century developments with regard to outdoor views in the work of such idiosyncratic artists as Simon-Andreas Krausz, Hendrik Meijer, Hermanus van Brussel, Jan Hulswit, Daniël Johannes Torman Kerkhoff, Frans Andreas Milatz and Gerrit Lamberts. Attention is also paid to book production and printmaking – activities that increased in the eighteenth century – by examining the designs of Jan Caspar Philips, Jan Punt and Bernard Picart, including Picart’s rare academic study of a female nude.

Genre drawing was dominated in the first half of the eighteenth century by the figure of Cornelis Troost, whose wife was the daughter of actors and who sometimes acted in comedies himself. A striking aspect of his compositions is the gentle mockery pervading such scenes as The Nocturnal Departure of the Guests after a Merry Evening Party. Troost’s famous theater scenes feature characters placed not in a décor but in real-life surroundings, a device also employed by his only pupil, Jacobus Buys, in the scene from the comedy “Hopman Ulrich” that will be included in the exhibition. 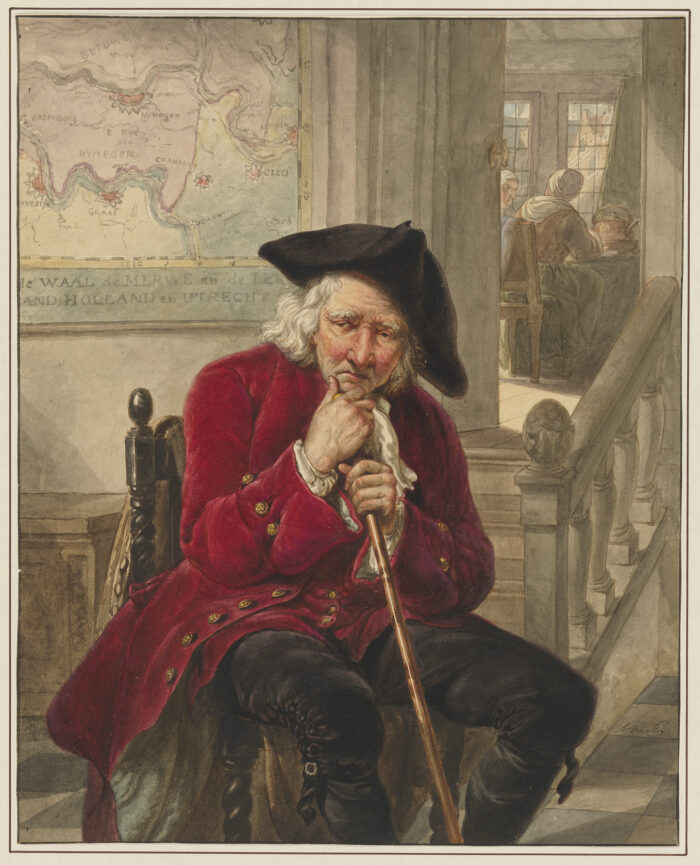 Later in the eighteenth century there was renewed interest in the tranquil interior scenes of the seventeenth century. Some of the genre pieces that originated in that sphere reflect the civic virtues propagated in spectatorial writings. In Dordrecht this trend was represented by Abraham van Strij; three drawings typical of his work will be shown, one of which (fig. 8) he made at Pictura, the oldest drawing society in the Netherlands. Another remarkable work is an unusual interior on blue-gray paper by Tibout Regters, an Amsterdam portraitist and genre painter.

In the still-life genre, the most popular type of work was the flower piece, represented by a watercolor by Willem van Leen. After 1750 it was another Dordrecht painter, the versatile Aart Schouman, who gave the bird picture a new impetus. He often worked from life in such places as the menageries of Willem V in The Hague, producing numerous watercolors of birds and other exotic animals, including the four magnificent specimens in this exhibition (fig. 9). 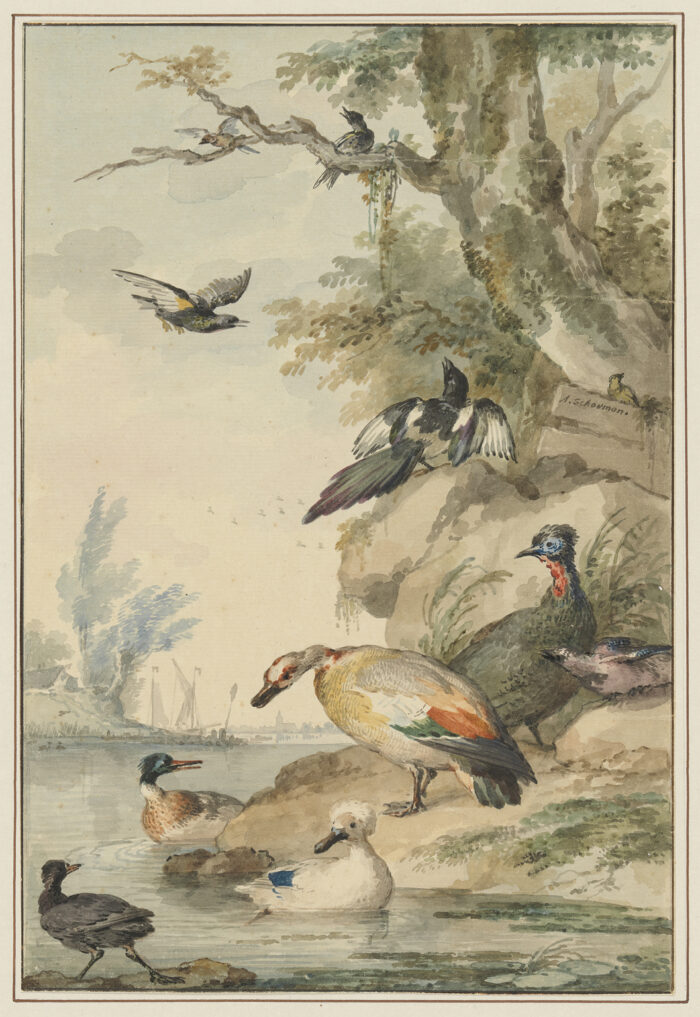 Other than Schouman, there were scarcely any true animal painters in the eighteenth century, apart from the horse painter Tethart Philipp Christian Haag – a native of Kassel who moved to The Hague – by whom an attractive stable interior will be shown.

The exhibition concludes with a few battle scenes by Dirk Langendijk that sketch a lively picture of the many military operations carried out at the end of the eighteenth century, when the founding of the Batavian Republic marked the beginning of a new era in the fields of politics, economics and culture.

The exhibition will be held at the Royal Museums of Fine Arts of Belgium in Brussels in the autumn of 2016, after which it will travel to several venues abroad, which are still to be determined. The catalogue – written by Charles Dumas, Stefaan Hautekeete and Robert-Jan te Rijdt, and numbering ca. 250 pages with ca. 120 color illustrations – will be published in English and will include all the available information on the technique, watermark, provenance and bibliography of each drawing.