Sometimes interesting subjects of research are stumbled upon by accident. In 2008 I was looking for a subject for an undergraduate thesis in my field of interest, Dutch artists who emigrated to Poland, when I came across Hans van Mildert (1588?-1638), a sculptor active in Antwerp who was born and later received his training in the East Prussian city of Königsberg (now Kaliningrad in the Russian Federation). The research I did at that time left me with so many questions that in 2010/11 I wrote another thesis, this time for a Masters in Museum Curating at the VU, the Free University of Amsterdam. My subject was the Mechelen sculptor Willem van den Bloocke – possibly Van Mildert’s teacher – who was active in the Polish city of Gdańsk, and my supervisor was Professor Frits Scholten, a member of CODART. My research included only a fraction of the sculptors active in the Baltic region. I plan to continue studying this group, which is certainly much larger than hitherto assumed. I am currently studying the Mechelen sculptor Gert van Egen, who emigrated to Denmark at the end of the sixteenth century. In March 2013 I will start my Ph.D. research on this group of sculptors at the Ernst-Moritz-Arndt University in the German Hanseatic city of Greifswald.

Starting in the second half of the sixteenth century, a sizeable group of artists from the Low Countries, mostly from the Southern Netherlands, moved abroad. Italy was a popular destination, of course, but many sculptors traveled to countries situated on the Baltic Sea, probably with no thought of ever returning home. The Eighty Years’ War had caused political and religious turmoil, and there were few prospects for employment. The Baltic region was a new and very attractive destination for artists, because for centuries there had been little competition. Moreover, the signing of the religious Peace of Augsburg in 1555 led to greater political stability within the Holy Roman Empire, and the ensuing economic prosperity meant that more attention and money was given to the arts.

A group of pupils and assistants of the Antwerp master-sculptor Cornelis Floris (1514-1575) left his studio with a Baltic destination in mind, intending to make use of Floris’s network and the popularity of the so-called Floris style. Floris made monumental tombs for various Baltic patrons, including the king of Denmark and the duke of East Prussia. His style became widely known through the series of prints made after his designs. The assistants who accompanied Floris’s sepulchral monuments to their destination and supervised their installation often settled down there afterward and made a name for themselves as Floris-style sculptors. Among these assistants were Robert Coppens (Mechelen ca. 1530-after 1603?), Philips Brandin (Utrecht ca. 1535-1594 Nykøbing), Willem van den Bloocke (Mechelen 1546/47-1628 Gdańsk) and Gert van Egen (Mechelen ca. 1550-Helsingør, before 28 February 1612). 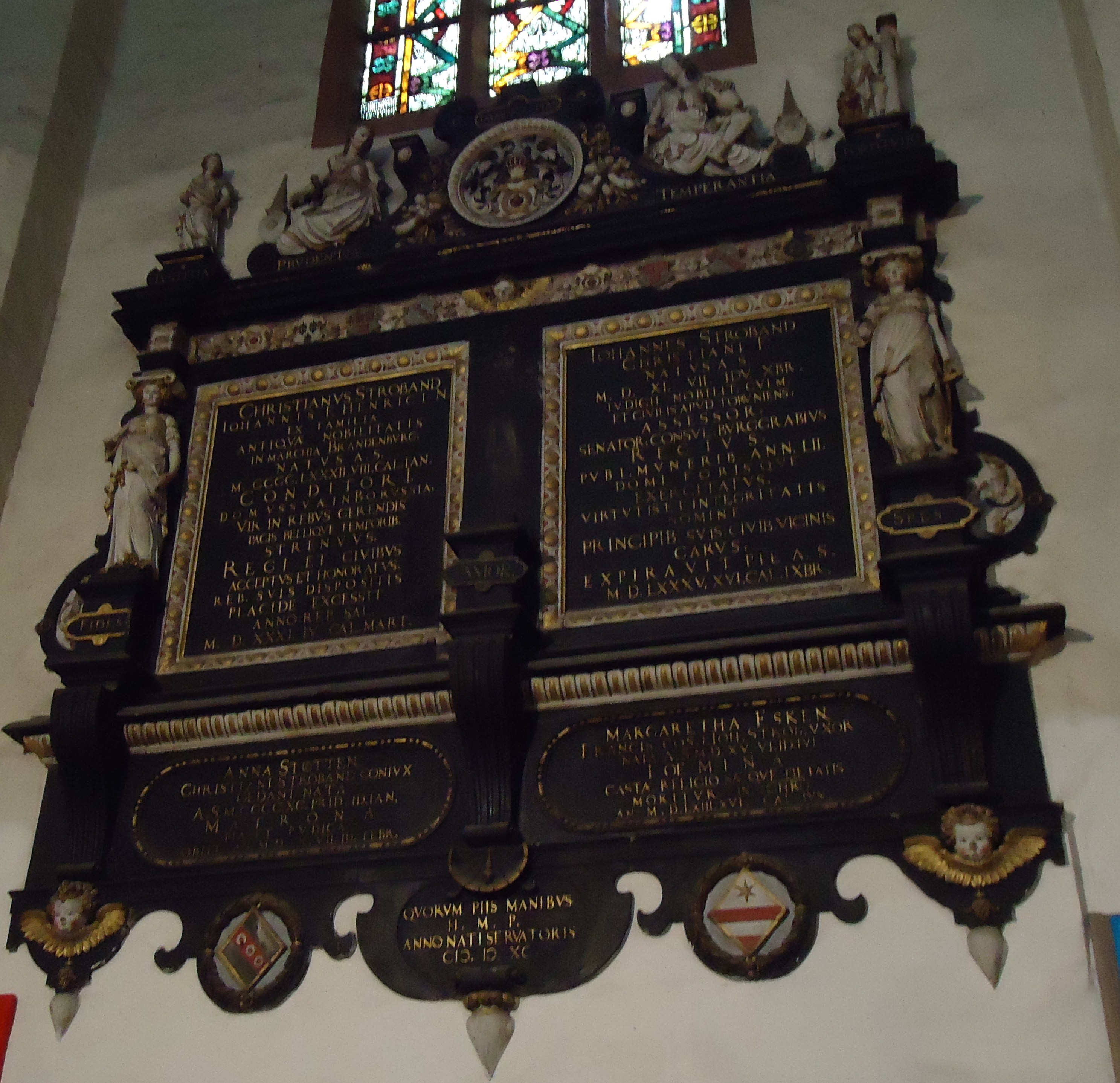 Relatively little art-historical research has been carried out on these migrant sculptors active in the second half of the sixteenth century in the area around the Baltic Sea. This group must have included many more names than the few mentioned here. Archival research has often unearthed information on sculptors who remained in one place, but there are large gaps in our knowledge of those more mobile sculptors whose place of residence was not always known, such as Robert Coppens. He was first mentioned in the archives in 1587 in Wolfsburg and afterward in Lübeck, only to disappear from the records after 1603, when he left for parts unknown. Travel within the Baltic region was relatively easy, because the principalities of North Germany, Denmark, Sweden, Poland, East Prussia and the Baltic states were closely related by marriage. These principalities were also largely Lutheran, apart from the kingdom of Poland. In Poland, however, there was a considerable measure of religious freedom in the second half of the sixteenth century, and in the free city of Gdańsk, most of the inhabitants were Protestant.

A Choice Based on Religion?

The big question I focused on during my research was whether patrons consciously chose the Floris style as a new style for the new religion, but I could find no evidence whatsoever of such a deliberate choice. After all, the subjects depicted on tombs and epitaphs were biblical themes favored by Protestants and Catholics alike. Take, for instance, such Old Testament scenes as the vision of Ezechiel, which Willem van den Bloocke used for Eduard Blemke’s epitaph in St. Mary’s Church in Gdańsk, or “Jonas and the Whale,” a scene that Robert Coppens carved in relief on the tomb of Christopher of Mecklenburg-Gadebusch and his wife, Elisabeth Vasa of Sweden, in Schwerin Cathedral in Germany. In other cases religious depictions were omitted entirely and replaced by an inscribed plaque, by “the virtues,” or by other ornamentation characteristic of Floris’s work, as evidenced by the Stroband family epitaph carved by Willem van den Bloocke in the Church of Our Lady in Toruń, Poland. 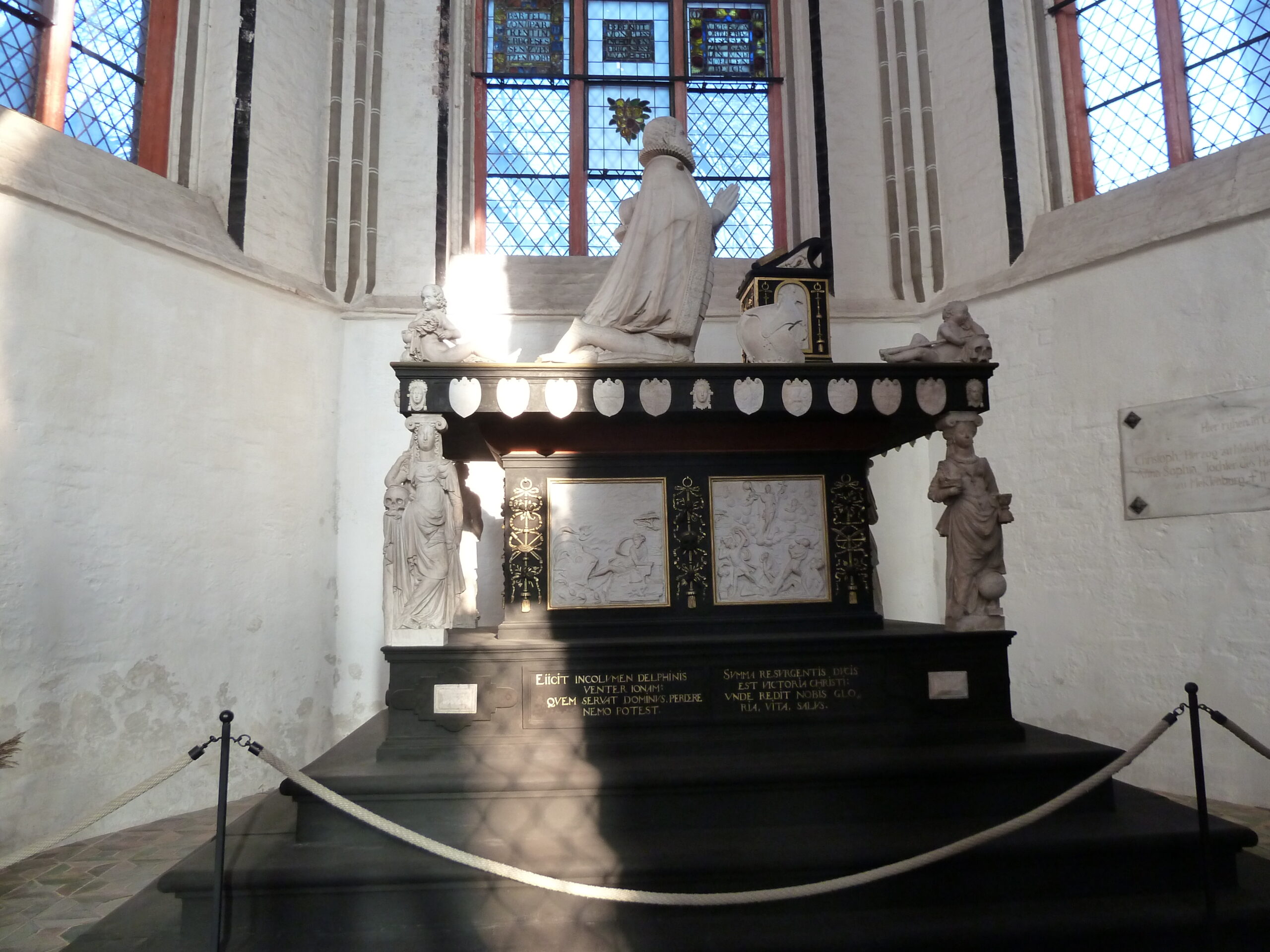 Robert Coppens (1530-1603), Tomb of Christopher of Mecklenburg-Gadebusch and his Wife, Elisabeth Vasa of Sweden, erected between 1594 and 1596, Schwerin Cathedral (Germany)

Another aim of my research was to determine the area in which these sculptors were active and the kind of network they could depend on to establish successful careers abroad. After all, in their native cities – where most of them were trained – they could have relied on the guild for support and protection. The sculptors listed above all worked at princely courts or as free masters: a privileged position that had many advantages. They had no duties to the guild and were often exempt from certain taxes, and consequently could work in freedom. Immigrants from the Low Countries were active not only as sculptors but also as painters, architects and craftsman, such as stone masons. In the second half of the sixteenth century, most of the ships plying the waters of the Baltic Sea came from the Low Countries. The mercantile houses in the Hanseatic cities and the Baltic region were largely in the hands of Dutchmen. Most of the trade involved timber, grain or salt. The migrant sculptors went to settle in areas that already had a Netherlandish community and thus networks that could help them to set up as artisans. Such networks were also useful in helping newcomers to find work. 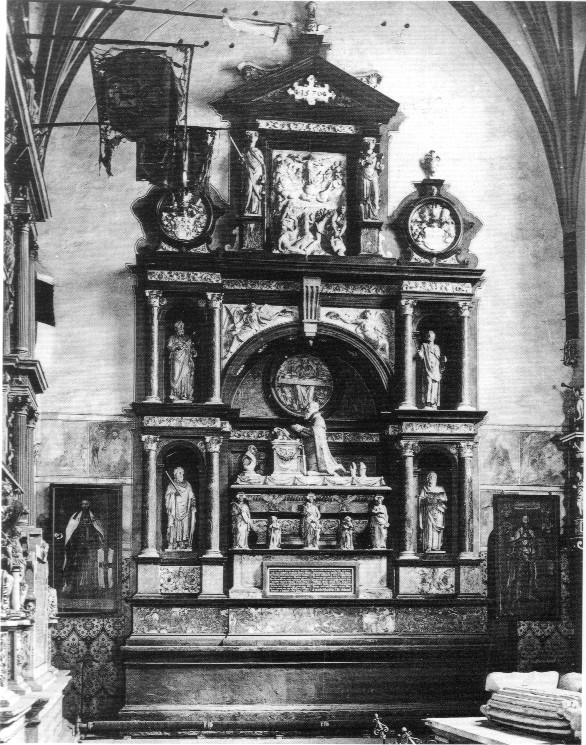 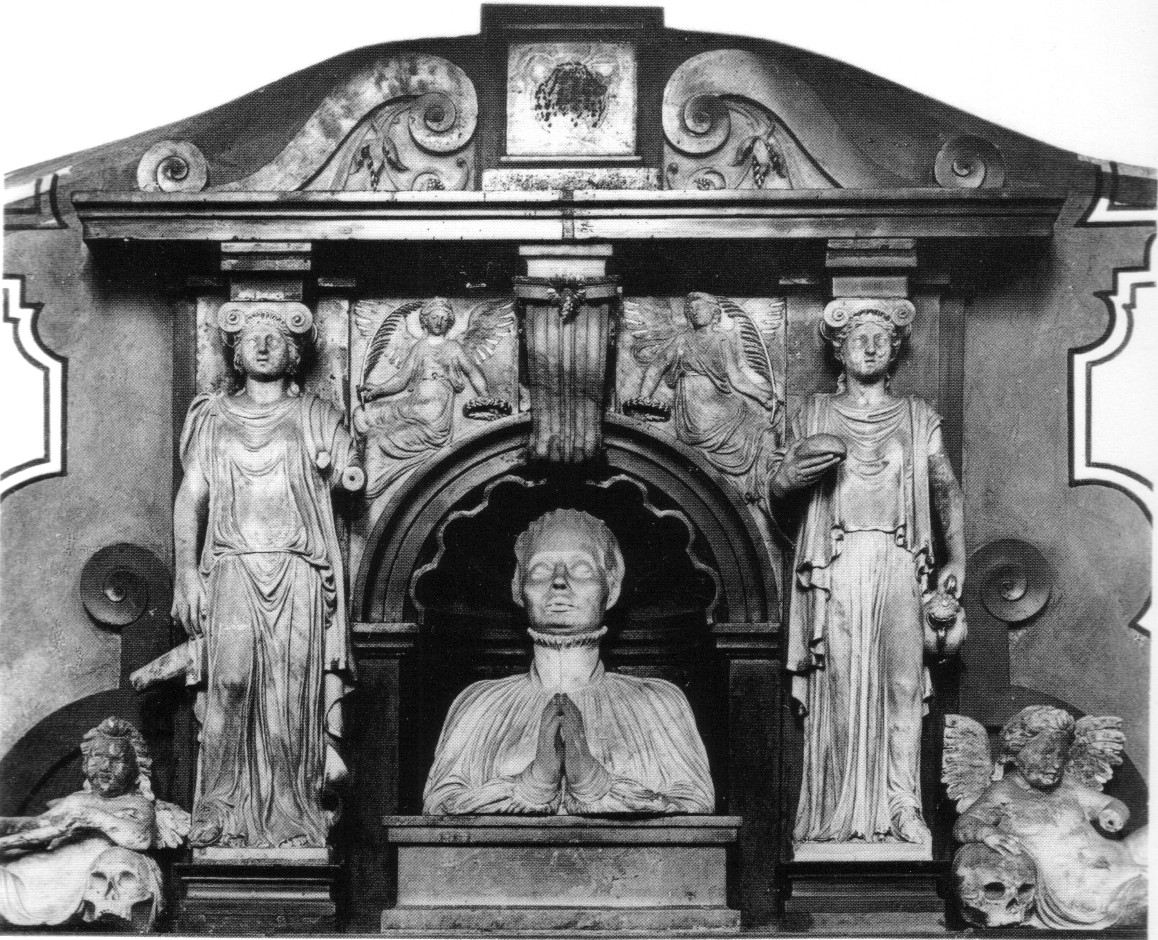 To begin with, the sculptors who propagated the Floris style took advantage of the master’s contacts with local patrons. Willem van den Bloocke probably left Floris’s studio in 1569/70 to convey the sepulchral monument made for Duke Albrecht of Brandenburg-Ansbach to Königsberg. Albrecht’s successor, Duke Georg Friedrich, then commissioned Van den Bloocke to make a tomb for himself and his wife. The Polish king, Stephan Báthory, having seen this monument during his visit to Königsberg, asked Van den Bloocke to come and work for him, whereupon the sculptor moved to Gdańsk. There he remained, working for the rest of his life for the aristocrats in the king’s circle and for the local bourgeoisie. This concise overview of the extremely successful career of Willem van den Bloocke shows how important patrons were to artists. A satisfied patron could help an artist, whether or not intentionally, to secure subsequent commissions. Once the Polish king had commissioned a monument, for example, the aristocracy soon followed suit. Another reason for the many commissions received by this group of sculptors was their mastery of the Floris style, which had been enormously popular in this area since 1549. The first traceable commission for a work in this style came from Duke Albrecht of Brandenburg, in Königsberg, who asked Floris to make an epitaph for his late wife, Dorothea of Denmark. Albrecht wrote to Dorothea’s brother, Christian III of Denmark, about this sepulchral monument, who subsequently commissioned from Floris a tomb for his father, Frederik I, which was eventually installed in Schleswig Cathedral, now in Germany. Because the rulers throughout this region were related by marriage, the Floris style spread over a large area. 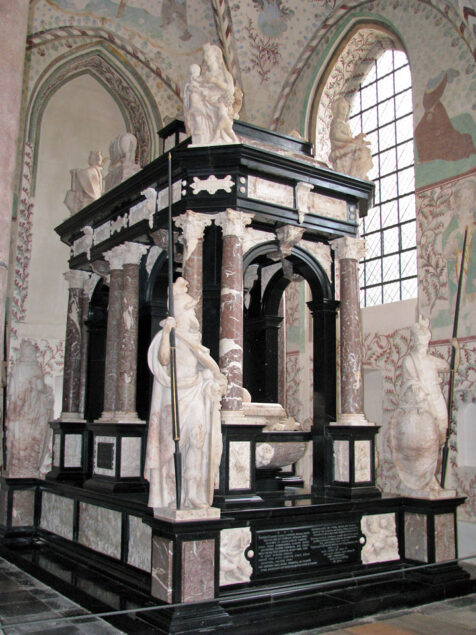 The monuments made by Gert van Egen in Denmark are similar in style to the work of Coppens in North Germany and the work of Van den Bloocke in Poland. This group of sculptors worked mainly on monumental designs for tombs, altars and entrance portals. One exception is the Mechelen sculptor Gert van Egen, active in Denmark, by whom small-scale work is also known. His extant oeuvre consists of five works and two studio copies, the only monumental work by his hand being the tomb – for which Floris produced the preparatory study – made for the Danish king Frederik II in Roskilde Cathedral. Two statuettes belonging to Van Egen’s oeuvre are both signed with his initials: GE. One statuette of Judith holding the head of Holofernes is now in a private collection in New York. The other, a Mercury standing on an identical base, belongs to the collection of the Metropolitan Museum in New York. These small pieces clearly show that Van Egen received his training primarily in Mechelen, the center of alabaster kleinplastik, or small-scale sculpture. Later on Floris taught him how to make large-scale works. Van Egen’s actual oeuvre must once have been much larger. A great deal of his income was presumably generated by the production of statuettes. Now, however, this work is either lost, circulating on the art market, or hidden away in museum collections. I am looking for more small-scale sculpture by Van Egen and am hoping that the members of CODART can lend me a helping hand in this endeavor.

Cynthia Osiecki is Curator of Old Masters at the Nasjonalmuseet for Kunst, Arkitektur og Design in Oslo. She has been a member of CODART since 2018.