In 1531, the English courtier and writer Sir Thomas Elyot commented that his countrymen felt compelled “if we wyll have any thinge well paynted, kerved [carved], or embrawdred, to abandon our own countraymen and resorte unto straungers [that is, “foreigners”].” The leading court painter to King Henry VIII was, of course, the German, Hans Holbein II, whom Elyot, too, chose to portray himself and his wife. Indeed, throughout most of the sixteenth and seventeenth centuries, numerous craftspeople – including painters and sculptors – travelled from the Continent, and especially from the Northern and Southern Netherlands, to work in England and Scotland (which until 1603 were two distinct nations). Their motives differed, at differing times. In some periods they came because of their personal religious beliefs; at other times their incentives were purely economic.

Thus, from about 1500 up to around 1700, royal and aristocratic patrons there who sought high-quality and fashionable portraits usually chose to be portrayed by foreign-trained artists. In sixteenth-century England and Scotland the demand was mainly for portraits. They served a range of practical purposes, and also seem to have been acceptable even in a Calvinist Protestant culture that was anxious about the Second Commandment’s prohibition of images.

Following the re-imposition of Catholic Habsburg rule in the Netherlands in 1567, Protestant England became a refuge for Netherlandish members of the Reformed religion, including artists. Some settled there, gaining naturalization. “Hans Eworth” – who was originally Jan Eeuwouts of Antwerp (active c. 1540-73) – had settled in London by 1549. Holbein had died in 1543, and Eworth was to become a leading court painter in England, as the principal painter to the Catholic Queen Mary I, and later also worked for her successor, Elizabeth I.

Other painters settled there only for a few years. Marcus Gheeraerts I was a member of the Protestant community in Bruges until the Duke of Alva’s campaign there forced him into exile in London in 1567 or 1568, with his young son Marcus II (1561/2-1636). The elder Gheeraerts became a member of the Dutch Reformed group there, before returning to the Netherlands in the late 1580s. However, his son, who presumably trained in London, subsequently made his entire career there. He became the principal artist to the elderly Elizabeth I (reigned 1558-1603) and subsequently to James I’s consort, Queen Anne of Denmark. The younger Gheeraerts was thus a second generation immigrant.

Some years after the accession of King James VI of Scotland as James I of England in 1603, Dutch painters began to arrive in England for professional advancement, rather than for religious reasons. The most successful of this group of Netherlandish immigrants was Daniel Mytens, who was born in Delft around 1590 and was recorded as a freeman at The Hague in 1610. Mytens arrived in London in 1618, and portrayed many leading figures at court. He became principal portraitist to James, and in due course to his son, Charles I, who acceded to the throne in 1625. Mytens retained this position until the Antwerp-born Anthony van Dyck arrived in 1632, after which Mytens, supplanted, retreated to The Hague.

Van Dyck worked directly for Charles I and transformed the visual image of the monarchy and the court – indeed, his influence on portrait painting in Britain was to be uniquely powerful and long-lasting. Almost from the outset, the other portraitists in London adopted his compositions and postures for their own works. This appropriation continued well beyond his lifetime, pervading British art through the rest of the seventeenth century and continuing during the eighteenth and nineteenth centuries.

Art collecting became fashionable at Charles I’s court – led by the monarch himself. By now, English connoisseurs were beginning to take an interest in genres other than portraiture. Courtiers vied with one another to collect art imported from the Continent and to commission new works by incomer artists. 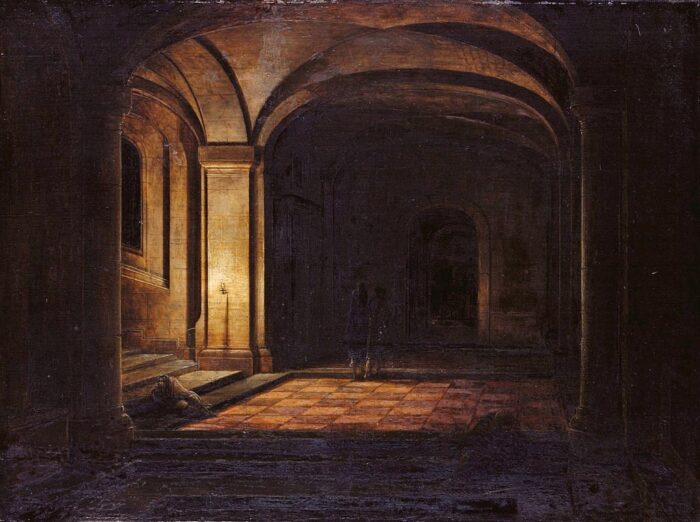 From 1617, Hendrick van Steenwijck (c. 1580-1649) was active in London. He specialized in architectural scenes, often darkly lit and ostensibly illustrating biblical stories. His Liberation of St. Peter  is one of a number of his paintings in the British Royal Collection. He seems also to have collaborated with other Netherlandish incomer artists, including Mytens, to produce fantasy architectural backgrounds for grand court portraits.

Landscape painting had not previously been seriously practiced in England. Indeed, as the heraldic painter and writer Edward Norgate observed, even the term “landscape” was borrowed from the Dutch – “landschaap.” Late in the 1630s, Alexander Keirincx arrived briefly to work for Charles I. He was commissioned to tour the country in 1639-40 to depict views of major cities and castles in Charles’s domain – including Richmond Castle . Charles I paid for a property in the City of Westminster which Keirincx shared from 1637-41 with Cornelis van Poelenburch of Utrecht, who specialized in small Italianate landscapes, on copper or panel, with small figures often enacting classical scenes. 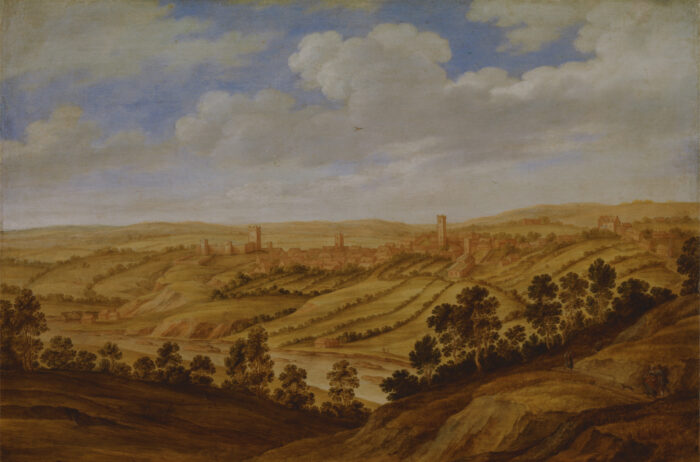 During the early years of Charles I’s reign, a number of visiting Dutch portrait painters were invited to Britain. From April to December 1628, Gerard van Honthorst was in London, where he portrayed not only Charles I  but also the hugely influential Duke of Buckingham and his family. Charles was so impressed that he made Honthorst an English citizen and gave him a lifetime pension of £100 a year. Nevertheless, Honthorst returned to Utrecht, although he continued to carry out occasional commissions for Charles. 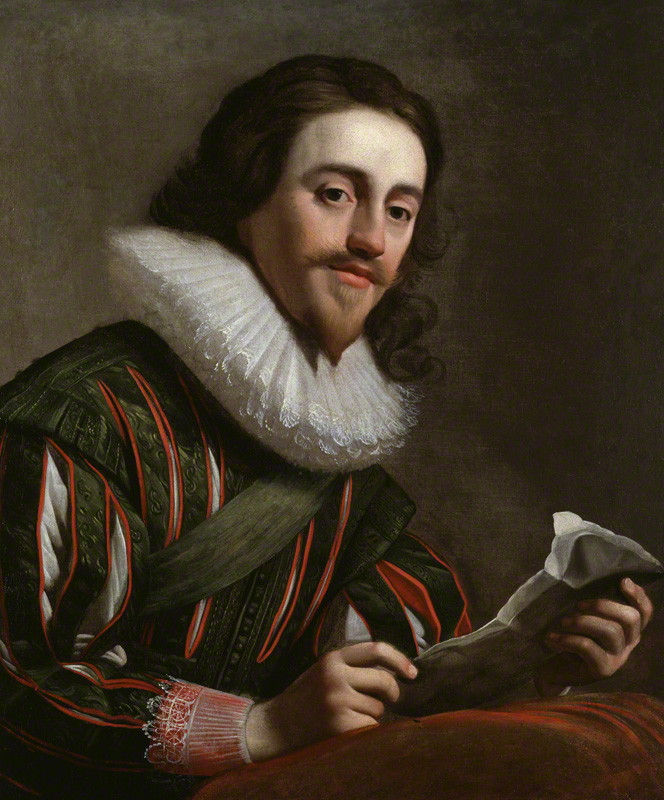 Meanwhile, Charles I also commissioned a few portraits from the prolific London-born Cornelius Johnson (1593-1661) of Flemish/German parentage, who may have been trained, as least partly, in the Northern Netherlands. As the political situation in Britain worsened, and civil war broke out there in 1642, artists dispersed. The Dutch incomers had already made the return journey home – thus Adriaen Hanneman, who had probably been working in Van Dyck’s London studio, left for The Hague in 1640, and Alexander Keirincx and Cornelis van Poelenburch returned in around 1641. In 1643, Johnson departed for the United Provinces, to make a new, successful career there. He settled first in Middelburg, then in Amsterdam and ultimately in Utrecht. Some of the British citizens who were war-exiled in the Netherlands apparently sought out familiar painters there – particularly Johnson and Hanneman – to have their portraits made. 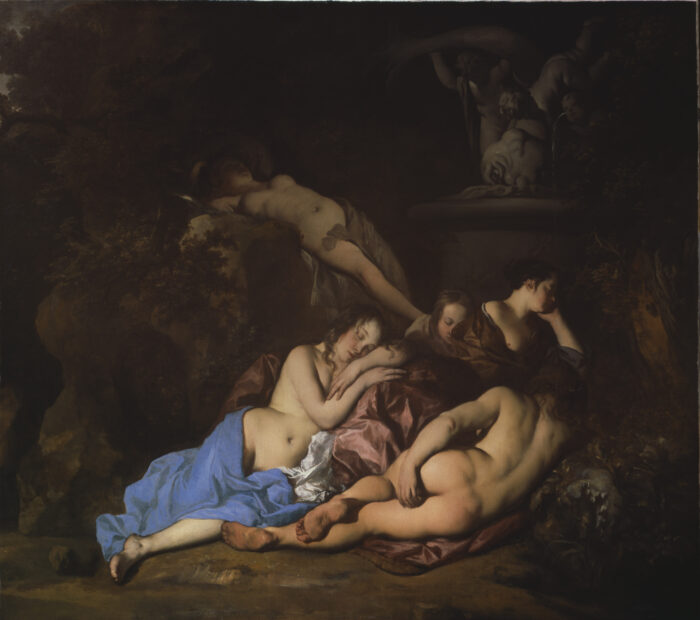 The traffic at this time was not, however, wholly one way. The Haarlem-trained Peter Lely, a pupil of Frans (and Pieter?) de Grebber, arrived in London at the start of the 1640s. Initially Lely painted pastoral scenes – like the Nymphs by a Fountain – and plain, somber-toned portraits, and seems to have had no difficulty finding clients in the disordered London of the war and interregnum periods. Often these were members of the great families who had previously sat to Van Dyck, who had died in 1641. Studying the portraits in their collections led Lely to lighten up his palette and to adopt the Van Dyckian compositions that clearly pleased the English market. Thus, when Charles II was restored to the British throne in 1660, Lely was perfectly positioned to assume Van Dyck’s pension as official royal painter: “as formerly to Sr Vandyke,” and, with his extensive studio, to become the leading portraitist of the elite.

And following the Restoration, other Netherlandish portraitists were also able to establish themselves in London. They included Gilbert Soest (c. 1605-1681, who is presumed to be of Netherlandish origin), Jacob Huysmans (c. 1630-1696, probably from Antwerp), Pieter Borsselaer (active 1664-87) and Willem Wissing (1656-1687; trained at The Hague). 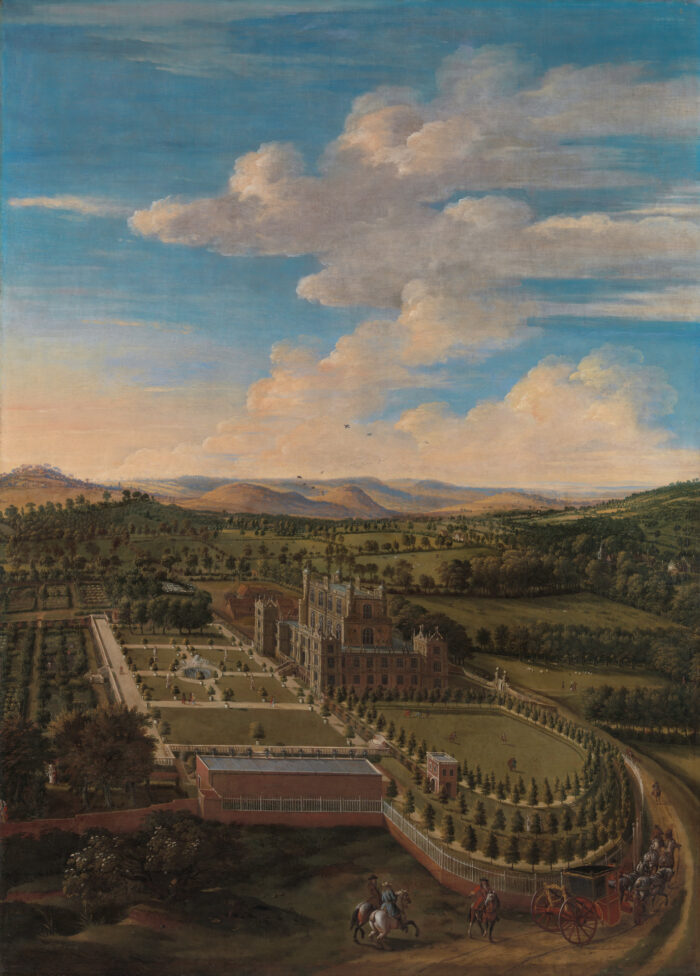 Moreover, British exiles returned to London after 1660 with an expanded understanding of visual possibilities, as a result of the years they had spent in France and/or the Low Countries. A genre that became particularly popular in Britain in the latter seventeenth century was the “country-house-and-estate portrait” – an image that carefully depicted a country property surrounded by its land – generally by one of the Netherlandish immigrant landscape painters. The leading maker of these was the Antwerp-born and -trained Jan Siberechts, who was in England by 1674. His most celebrated works include multiple images of Longleat House in Wiltshire, Cheveley Park in Cambridgeshire and Wollaton Park in Nottinghamshire.

Among the first exponents of still-life painting in Britain was Pieter Roestraten, who had settled there by 1666. The prolific Leiden painter Edward Collier travelled between the Netherlands and London, turning out numerous still lifes that comprised books, newspapers and documents (the works for his English clients included texts in English), as well as globes, medals, jewelry, musical instruments and luxury tableware, in constantly repeated permutations.

Marine painting seems to have been little known in Britain until the arrival of Willem van de Velde II and his father Willem van de Velde I in the winter of 1672-73, in response to Charles II’s invitation to Dutch craftspeople to immigrate. Their images of specific elite vessels, as well as of sea battles and storms, would initiate a long-lived strand of marine painting in their new country.

Thus, throughout the sixteenth and seventeenth centuries, the leading painters to the British elite were generally a succession of incomers – particularly from the Netherlands. It was not until the early years of the eighteenth century that British-born painters would begin consistently to achieve dominance in their own market.

Karen Hearn is Honorary Professor at University College London, London, United Kingdom. She has been a member of CODART since 1999.