When I joined the Wallace Collection as a curator in 2011, I began to dream of reuniting one of the museum’s greatest treasures, Rubens’s The Rainbow Landscape (fig 1); with its historic companion piece, A View of Het Steen in the Early Morning (the National Gallery; fig 2).  The two landscapes had been painted by Rubens as a pendant pair but had not been displayed together in over two hundred years.  The idea seemed likely to remain only a pipe dream.  Due to the way in which Lady Wallace’s bequest had traditionally been interpreted it was believed that works from the Wallace Collection could not be displayed alongside those of other collections. 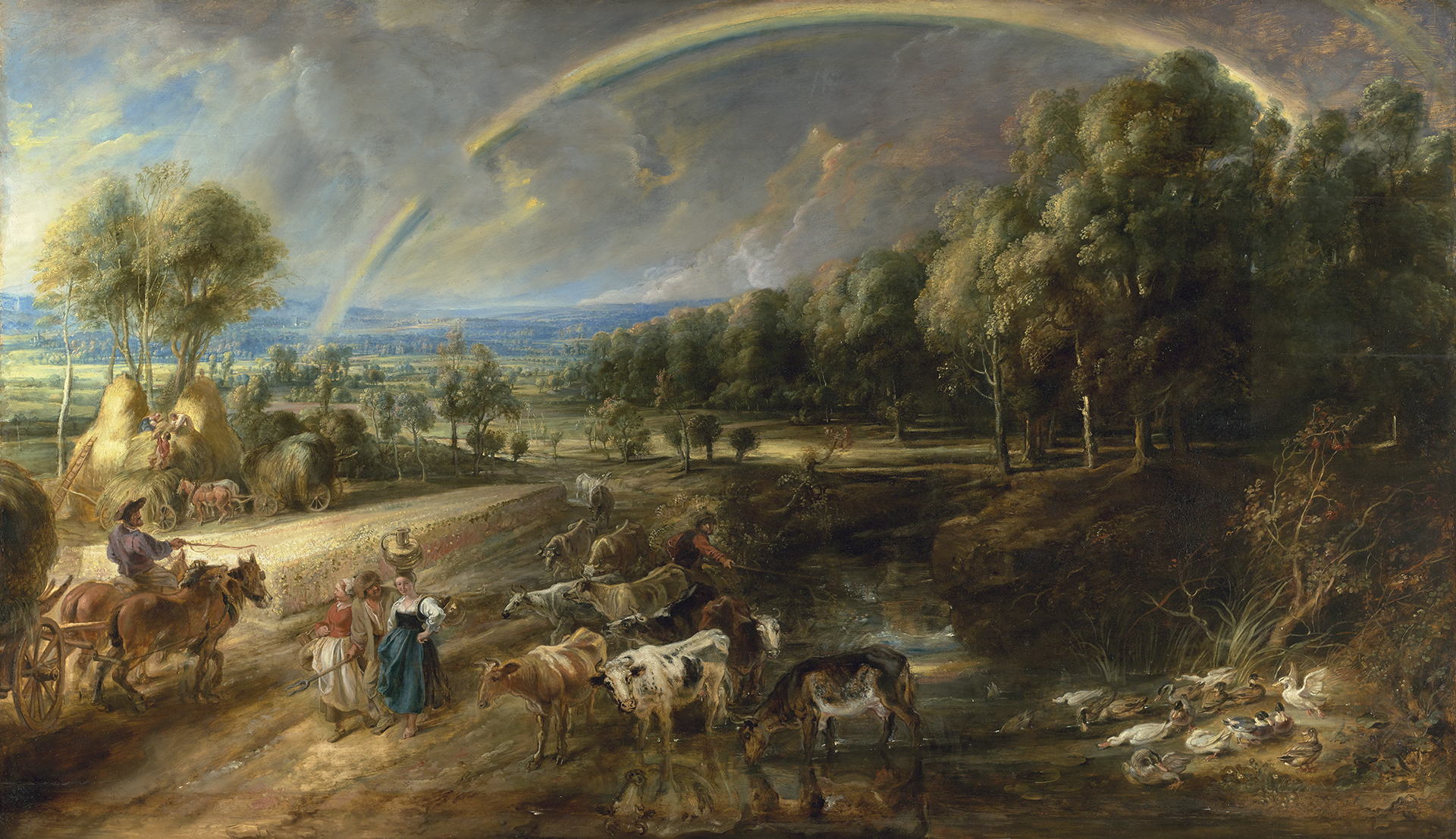 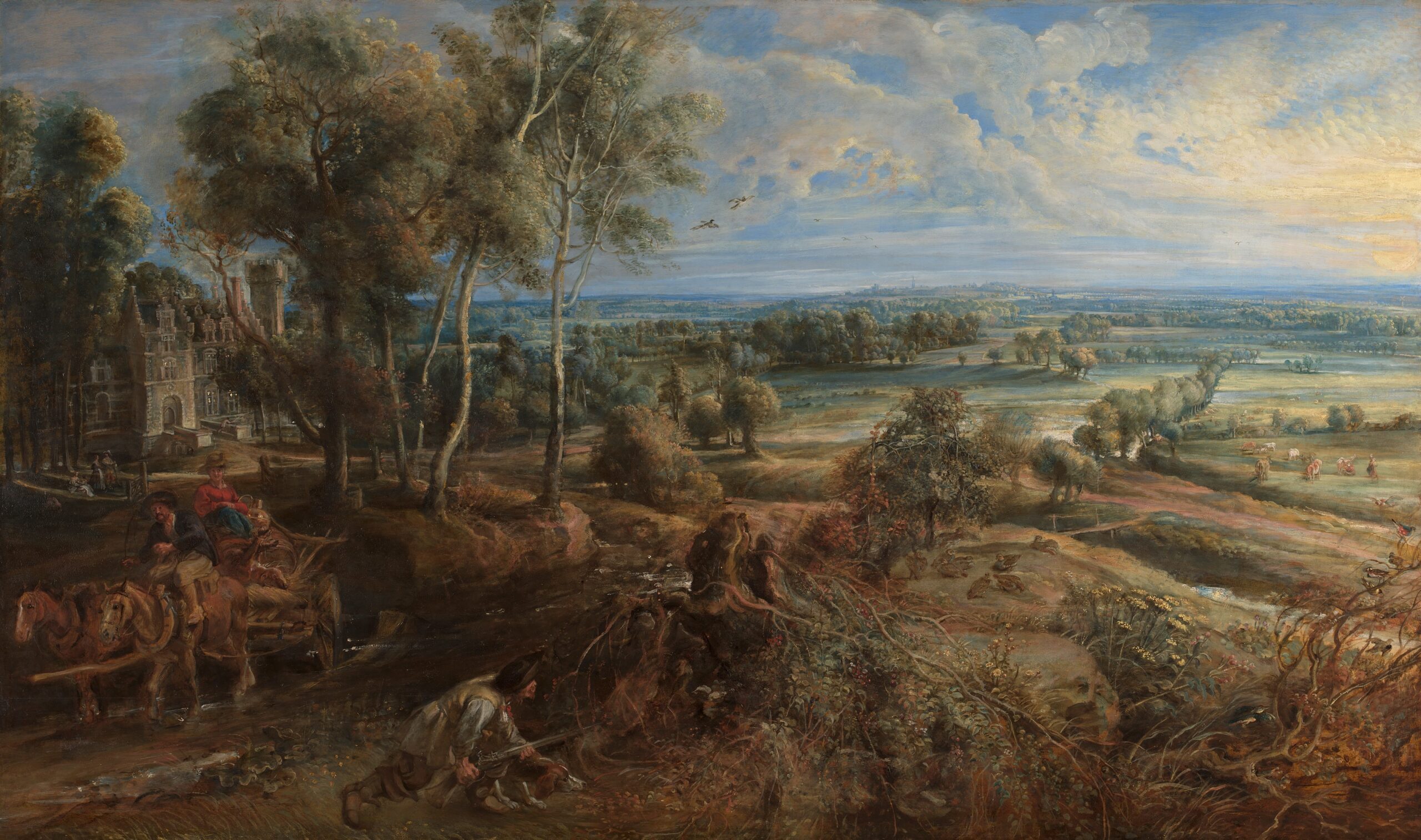 The Rainbow Landscape has for decades been hung in the center of the Great Gallery’s long, north wall (fig 3).  When I was given the honor of rehanging the Great Gallery with Christoph Vogtherr, director at the time, we tried a number of other locations for the painting but soon realized why it had kept its central position through several previous rehangs.  Its bold composition, color range and sheer size demand attention.  When frequently contemplating the work during this project, my mind would inevitably turn to its companion piece, kept just a short distance away in central London. I felt a strong sense of regret that the two would never be viewed together.  I was not the first to think this; the former director John Ingamells had lamented in 1982 that the opportunity to reunite the pair had been lost forever. Despite this, I mocked up hangs using reproductions of the two paintings, trying to picture what it would be like “in the flesh” to encounter them together in one room. 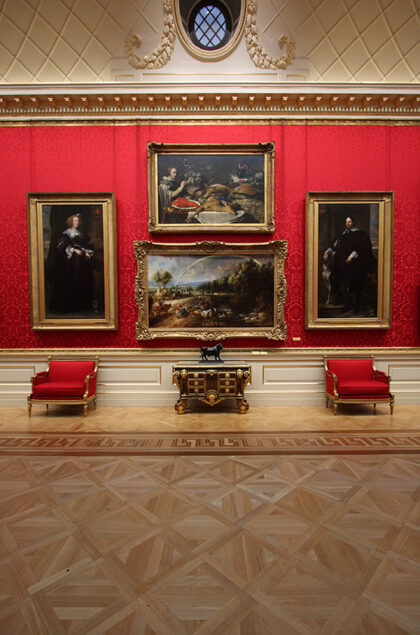 3. The Rainbow Landscape on the north wall of the Great Gallery, Hertford House © The Wallace Collection, London

An opportunity eventually did however come to reunite the pair when the Wallace Collection entered an unprecedented reciprocal loan agreement with the National Gallery. The Wallace Collection would lend Titian’s Perseus and Andromeda to reunite the famous Poesie series, in exchange for the National Gallery’s subsequent loan of A View of Het Steen in the Early Morning.

The resulting Rubens exhibition had to be postponed by one year due to the pandemic but finally opened on 3 June in our exhibition galleries (fig 4). In preparation for the exhibition, A View of Het Steen in the Early Morning underwent extensive conservation at the National Gallery.  The delicate program of treatment carried out by Larry Keith, Head of Conservation, involved removing very discolored varnish layers to restore the breath-taking color and texture of Rubens’s work, resulting in stunning visual improvement.  Work on the panel support was also undertaken by Britta New to safeguard its structural integrity, ensuring that the painting could be transported safely.  The painting’s relative fragility as a composite panel in monumental format (over 2 meters in width) had meant it had never been lent out by the National Gallery before.  Also in preparation for the exhibition, Peter Schade, Head of Framing at the National Gallery, and his colleagues created two new matching frames which are based on a seventeenth-century Franco-Flemish prototype. These replace old nineteenth-century frames that did not adequately support the paintings.

To those well-versed in Dutch and Flemish painting, the two paintings need little introduction. They are seen as the culmination of Rubens’s lifelong engagement with landscape painting, which he undertook in his free time and purely for pleasure. As with his portraits of friends and family, these works show the more personal side of his oeuvre.  They are associated with the last four years of his life, specifically the summers he spent ‘somewhat in retirement’ (in his words) at his newly acquired manor house and estate, Het Steen. We wanted to help visitors to understand the personal significance of these works to the artist and also to tell the story of the paintings from their creation to their eventual separation in London.  To do so, we decided to make a film with new footage of the estate with Street Films.  The film begins with images of the house and surrounding land as they appear today and brings the visitor into the heart of the rich Brabant landscape that inspired the paintings. The house at Het Steen still stands, remodeled somewhat over recent centuries.  It now belongs to Visit Flanders, who have kindly also sponsored our exhibition. 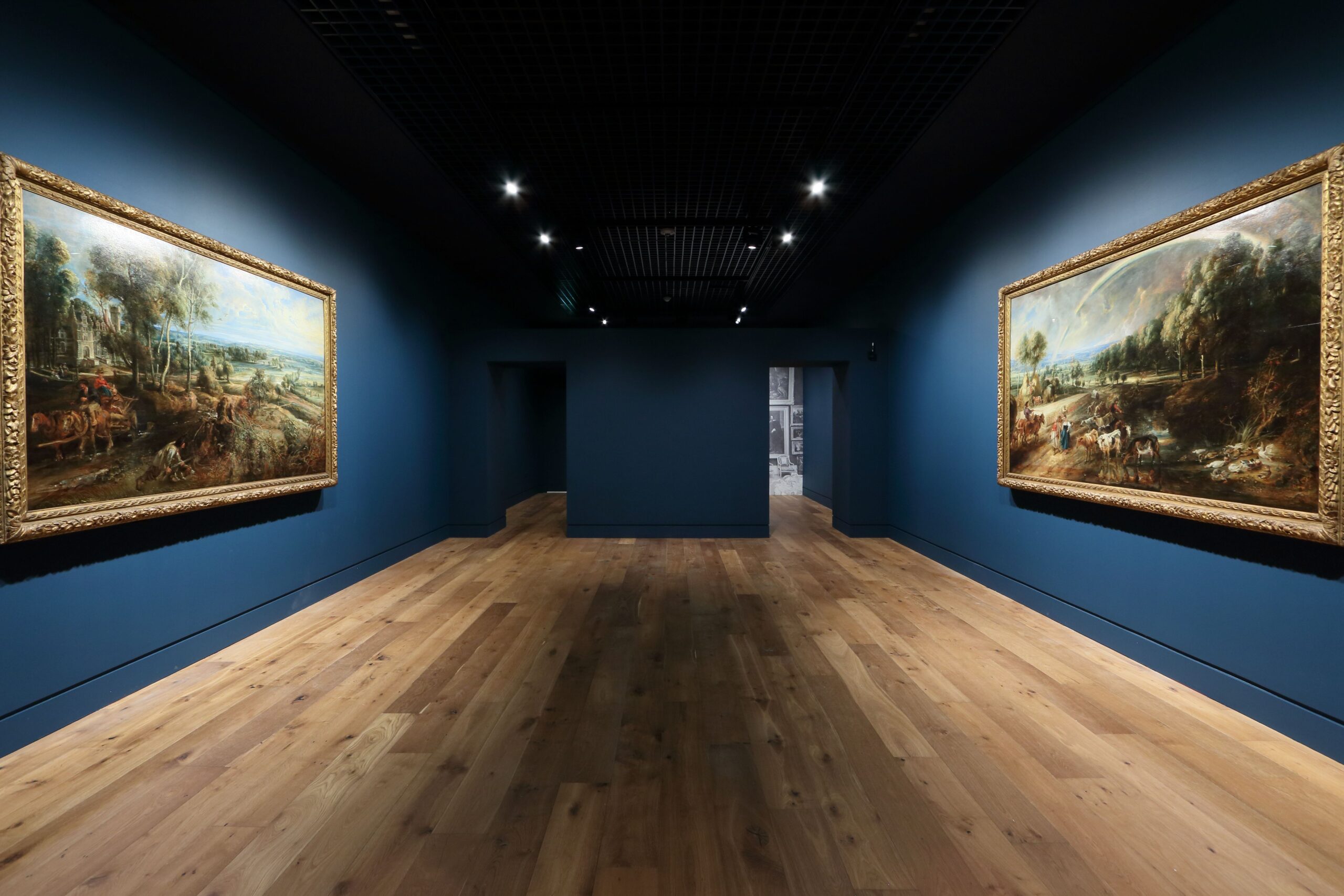 The pair are the largest of Rubens’s landscapes and, as objects, represent considerable feats of craftsmanship: They are each painted on boards of high quality Baltic oak, joined by a highly skilled panel maker. The unusual composite panel construction of the paintings had been known for some time before the exhibition but less was certain about how the supports had been constructed and, separately, how the compositions of the paintings themselves had developed. The investigation of the two paintings in preparation for this exhibition has revealed some important new findings.   The work confirmed that they were each constructed and painted in three discreet stages, from the center outwards, beginning with a medium-sized panel which was expanded in width and height, and finally with extensions to all four sides.

I examined The Rainbow Landscape at the Wallace Collection in May 2019 with Simon and Thomas Bobak and Michaela Straub, of Bobak Conservation, with Nicole Ryder. The technical imaging was undertaken by Tager Stonor Richardson. Our key discovery was that our painting began as a smaller landscape depicting a herd of cattle on a track, accompanied by a seated shepherd and milkmaid, with a double arced rainbow, which Rubens likely considered a complete composition (fig 5).  We now know that Rubens intended this painting to be a landscape with a rainbow from the beginning (although the position of the rainbow itself would move in the course of the painting’s expansion and evolution).  The fact that The Rainbow Landscape and A View of Het Steen in the Early Morning were almost identical in their dimensions at all three stages strongly suggests that Rubens developed the two compositions in parallel, to complete and complement each-other. The parallels in the details and motifs in the two paintings reinforces this idea. 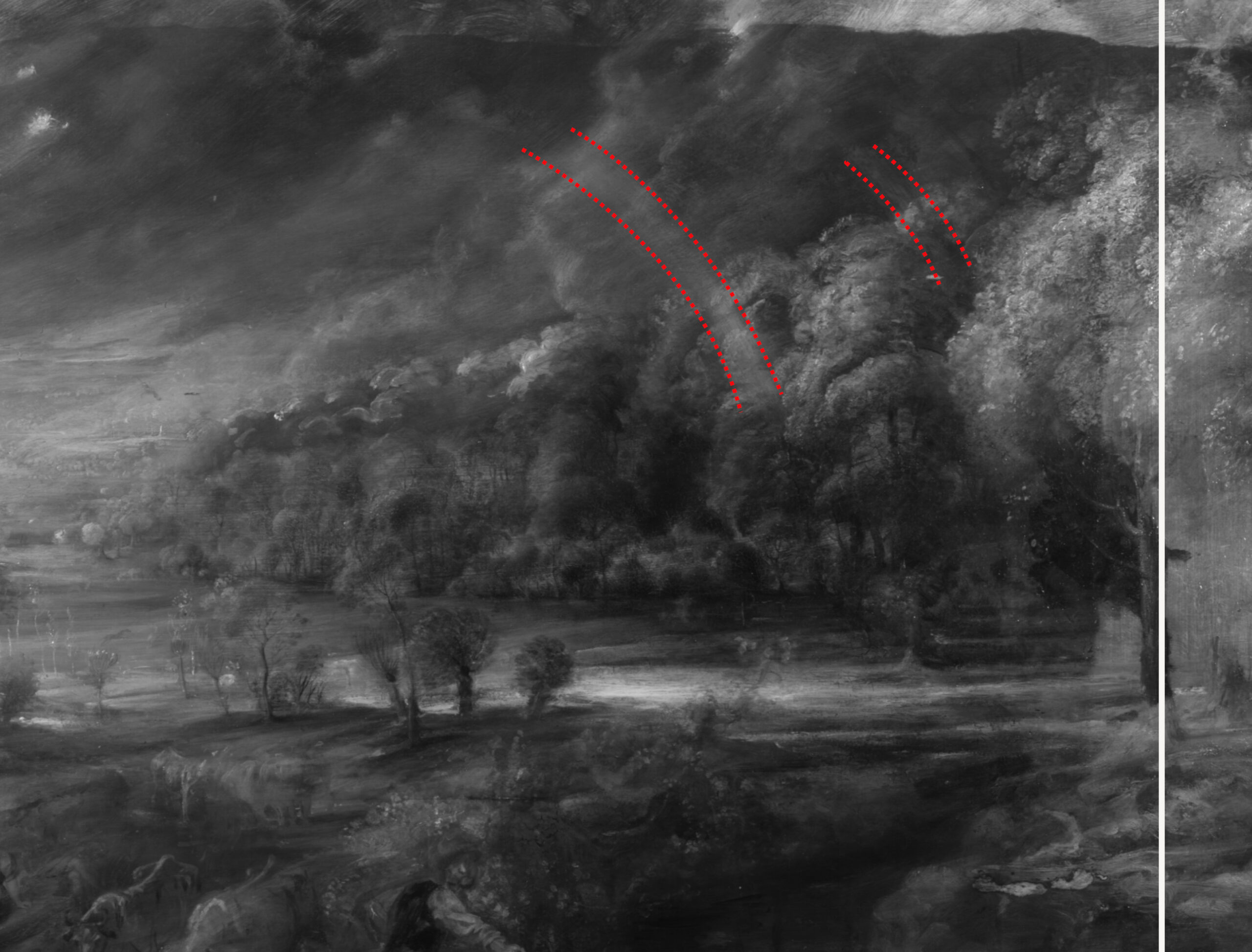 A big question was how to display the two paintings—side by side or facing each-other. This is still the subject of some debate. We decided that the two paintings should hang opposite each-other, given that the position of the sun in each is mirrored in the other and that strong oblique diagonals drawing the eye from the bottom corner into the middle distance suggest that Rubens intended the paintings to hang in a narrow hallway, facing each-other. 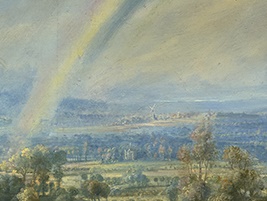 An exciting aspect of the work surrounding the exhibition is that we have continued to make new discoveries about these well-known masterpieces.  For example, at our international Rubens conference, Dr Bert Watteeuw of the Rubenianum demonstrated that The Rainbow Landscape and other late landscapes were based on actual views of the estate, and that the façade that we see in the distance under the rainbow is that of Het Steen itself (fig 6). The proceedings will be published in a dedicated volume of Oud Holland.

I am greatly indebted to the directors of the two museums, Dr Xavier Bray and Dr Gabriele Finaldi, the team at the National Gallery, particularly Bart Cornelis and Larry Keith, and to my colleagues at the Wallace Collection for making this exhibition possible.  We hope that our visitors will take the opportunity to immerse themselves in these breath-taking, sweeping panoramas and to experience the exhilaration of immersion in nature that Rubens communicates to us in his exuberant brushwork.

To accompany the exhibition, the Wallace Collection is hosting a series of evening talks which focus on aspects of Rubens’s extraordinary life and achievements and his enduring legacy, as well as the culture of his day.

Lucy Davis is Curator of Flemish and British Paintings, Miniatures and Works on Paper at The Wallace Collection in London. She has been a member of CODART since 2011.