The mysterious collector and the little-known museum

In 1860, Gabrielle d’Héricourt decided to bequeath her collection to the town of La Fère provided a museum bearing the name of her mother, Jeanne d’Aboville, was established there. A reserved aristocrat, the Comtesse d’Héricourt was born in this northern French commune in 1796 and married Général d’Héricourt in 1817. The couple purchased some thirty pictures with which to decorate their home. After she was widowed in 1837, the countess moved into a mansion in Paris, where she assembled a collection of European paintings probably acquired on the French art market around 1850. The small municipal museum was inaugurated in 1868 following Gabrielle d’Héricourt’s gift of 295 pictures. After her death in 1875, this was enriched by the remainder of her collection, numbering almost 600 works in total.

The Comtesse d’Héricourt had a particular taste for the northern schools, which make up more than half her collection. Although a lover of painting, certain optimistic attributions in the early catalogues (those published in 1870 and 1889) suggest that she was no erudite collector. The museum’s subsequent history was a turbulent one, and more than a hundred pictures (including twenty-three Dutch) went missing at the end of the First World War. No proper study of the collections was embarked upon until 1965, with the catalogue compiled by the curator Jacques Depouilly for his École du Louvre thesis. This unpublished typescript is a valuable source of information, not least because it includes appraisals of certain paintings by Horst Gerson and Sturla Gudlaugsson, who visited La Fère on their tour of French museums in 1963. During the second half of the twentieth century, a number of exhibitions brought the museum’s masterpieces into the limelight. Thus in 1965 The Raising of Lazarus (fig. 1) was lent to the Musée du Petit-Palais for the exhibition “Le XVIe siècle européen” along with a panel by Maarten de Vos and an Entombment of the Antwerp school, while in 1970 the Landscape with Draftsman by Alexander Keirincx, The Ruins of Egmond Abbey by Salomon van Ruysdael, and Mors Omnia Vincit by Mathias Withoos were shown in the exhibition “Le Siècle de Rembrandt,” also at the Petit-Palais. In spite of Christine Debrie’s book Richesses de la peinture flamande et hollandaise des XVIe et XVIIe siècle au musée Jeanne d’Aboville, at the end of the twentieth century the museum remained relatively unknown. 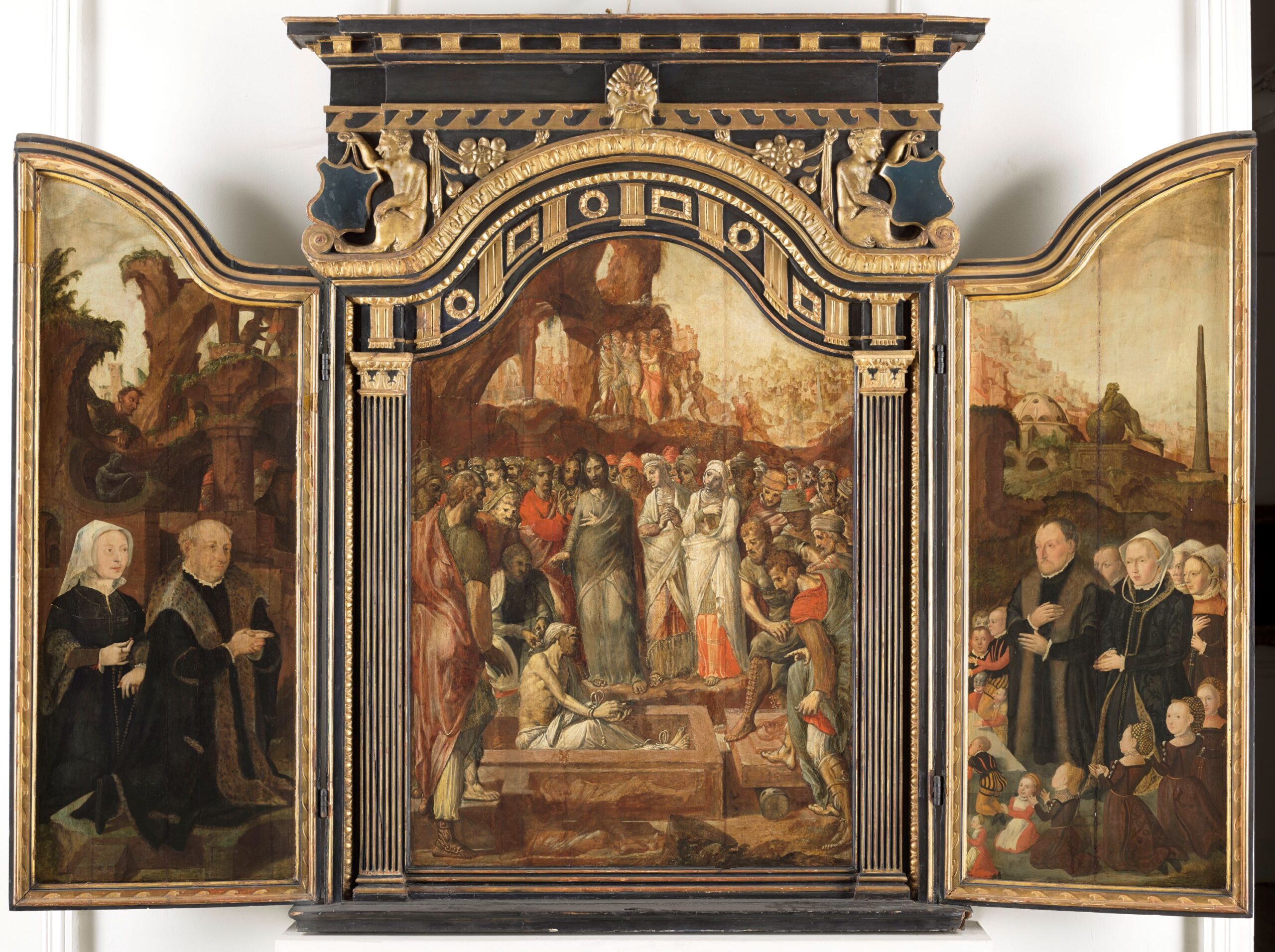 The current commitment to the collections

The current team is performing an admirable task of revitalizing this unsung collection located off the beaten tourist track in a town of fewer than three thousand inhabitants. The museum is pursuing an ambitious policy of restoration, forging ahead with a program of high-definition digitization, and has organized thematic exhibitions as well as a rich and varied calendar of events aimed at different audiences. In 2015, fifty years after Jacques Depouilly’s study, I compiled the catalogue raisonné of the 118 Dutch pictures—again within the framework of an École du Louvre thesis. As yet unpublished, this study, enhanced by analysis from specialists both French (my special thanks to the Fondation Custodia team—especially Cécile Tainturier, who directed the research—but also to Jacques Foucart and David Mandrella) and foreign (including the curators of the RKD, with whom I was able to meet) has given rise to conferences and articles. Were this catalogue to be published, it would help to spread the word about this astonishing collection of interesting examples of Dutch painting.

One of the most famous paintings in the Musée Jeanne d’Aboville is the Triptych of the Both Family (fig. 1), its only Dutch work dating from the sixteenth century. In 1959, Egbert Pelinck attributed this memorietafel to Aertgen Claesz. van Leyden, an attribution that was subsequently adopted in the Dutch literature, ensuring that the work became well, and widely, known among specialists. This remarkable polyptych, dating to around 1558, whose original sculpted frame survived the Beeldenstorm, is about to undergo investigation in advance of an in-depth restoration aimed in particular at correcting its ancient parquetage.

Whether Italianate or picturesque, seventeenth-century landscapes seem to have met with Gabrielle d’Héricourt’s approval. Examples of the southern influence include Daniel Vertangen’s Diana and Callisto on copper, a Mediterranean port scene by Thomas Wijck, and the astonishing Encounter in a Landscape, traditionally attributed to Karel Dujardin and dated by Ernst Brochhagen to the end of the painter’s career in Italy. This attribution, corroborated by Gerson and Gudlaugsson, remains the subject of debate, with regard in particular to the very bright palette and the naiveté of certain figures. A better understanding of the picture might be gained by eliminating layers of yellowed varnish. Another painting in a darkened state has been compared to the work of Adriaen van Eemont. The museum also conserves a fine landscape by Jan Baptist Weenix. Despite the abrasion of its paint layer, notably in the background, which depicts the Castel Sant’Angelo and the Pyramid of Gaius Cestius, the attribution of this scene, with its mysterious atmosphere, is confirmed by the highly naturalistic rendering of the flock of animals in the foreground. 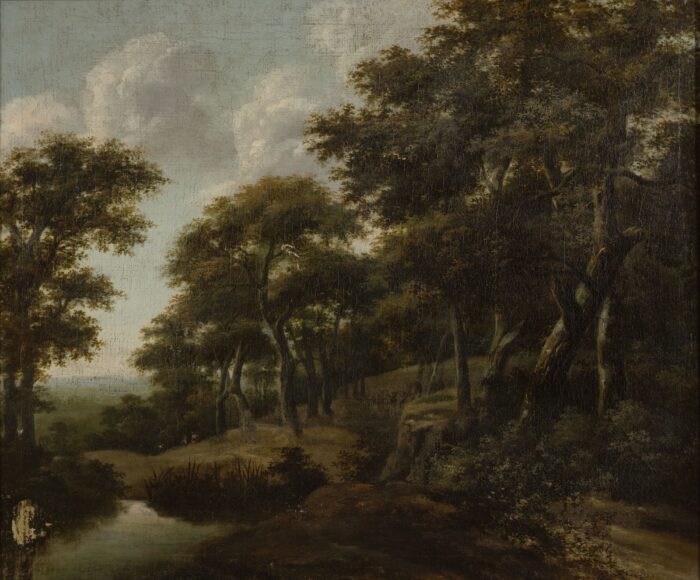 The collection holds numerous animal paintings, attributed to Johannes van der Bent, Hendrick Mommers, Michiel Carrée (whose Moving to New Pastures is currently under restoration), Simon van der Does, Albert Klomp, and others. Meanwhile the Landscape with Two Shepherds Tending a Flock, which displays similarities with the work of Jacob Sibrandi Mancadan, requires significant work, its wooden panel having split from side to side. Moreover it was during a restoration in 2001 that the herd of cows and sheep in the foreground of the Forest Interior (fig. 2) was discovered to be an ancient repaint added at the same time as a spurious Hobbema signature. Purged of this clumsy addition, the naturalism of the trees and their star-shaped clusters of leaves have been likened to the style of Adriaen Verboom. Among the equestrian scenes, the Cavalry Skirmish, attributed in 2015 to Jan Jacobsz. van der Stoffe, a Leiden artist who specialized in the genre, is currently undergoing cleaning.

The museum’s collection of landscapes is complemented by a number of river views and marines, of which Selling the Catch (fig. 3), signed by Salomon van Ruysdael in 1657, is a depiction of winter pleasures before the ramparts of a remodeled Arnhem. The works traditionally believed to be by Jan van Goyen have now been disattributed but the museum possesses a fine river landscape with fishermen by Pieter de Neyn and the amusing Duck Game by Thomas Heeremans. The Duck Hunt attributed to Louwijs Aernouts Elsevier is currently undergoing restoration to remove some jarring repaints and ancient varnish. This view of a meandering delta alive with fowl, combining the naturalist interests of the animal painters with the modernity of Van Goyen’s landscapes, promises to be an interesting rediscovery. An earlier restoration (2019) confirmed the attribution of the Shipwreck (fig. 4), initially proposed in 2015, to Simon de Vlieger. The reading of this work had been complicated by its highly oxidized varnish. In conjunction with the subtle palette and foreground chiaroscuro, the drama of the scene calls to mind the painter’s youthful works. 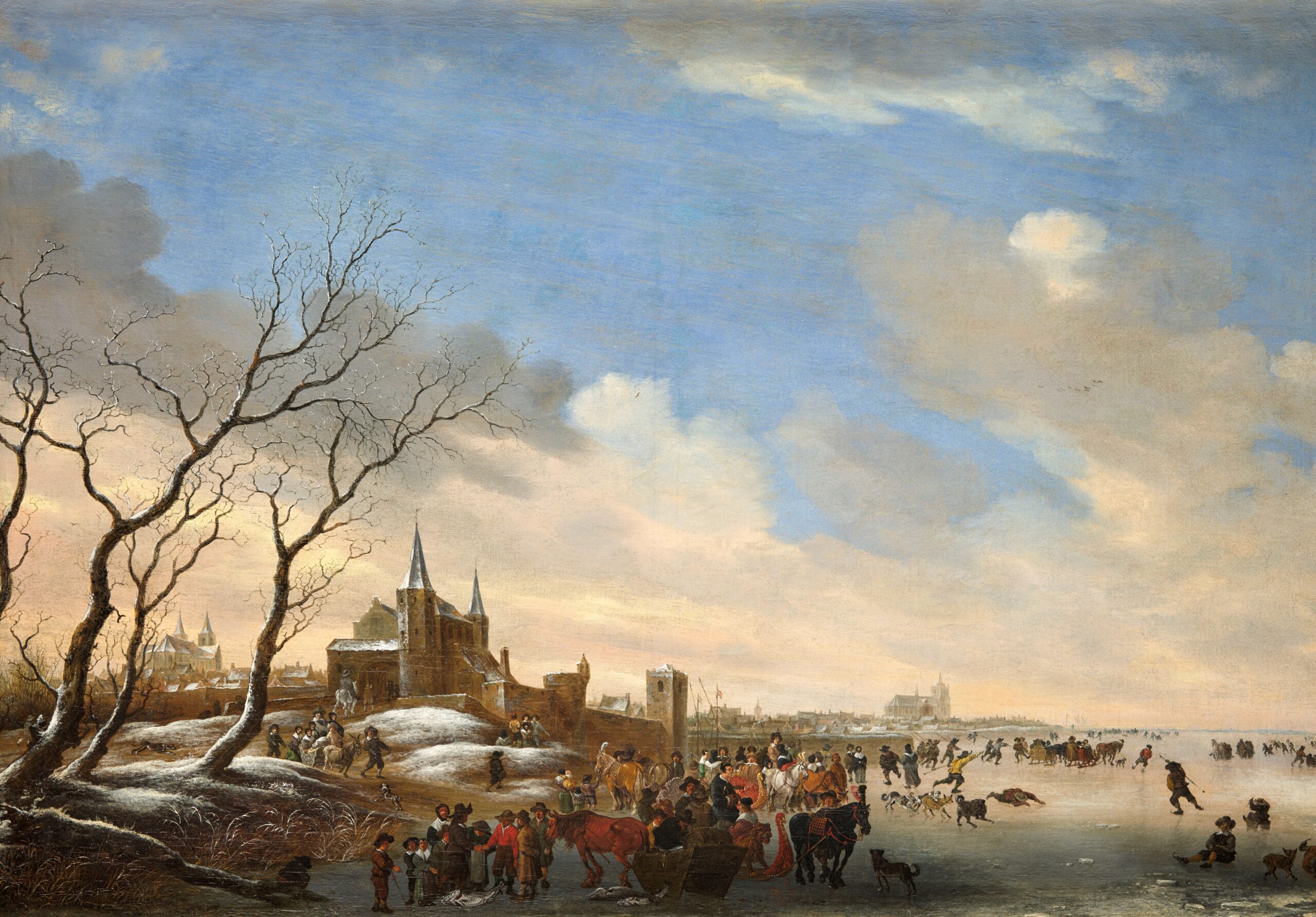 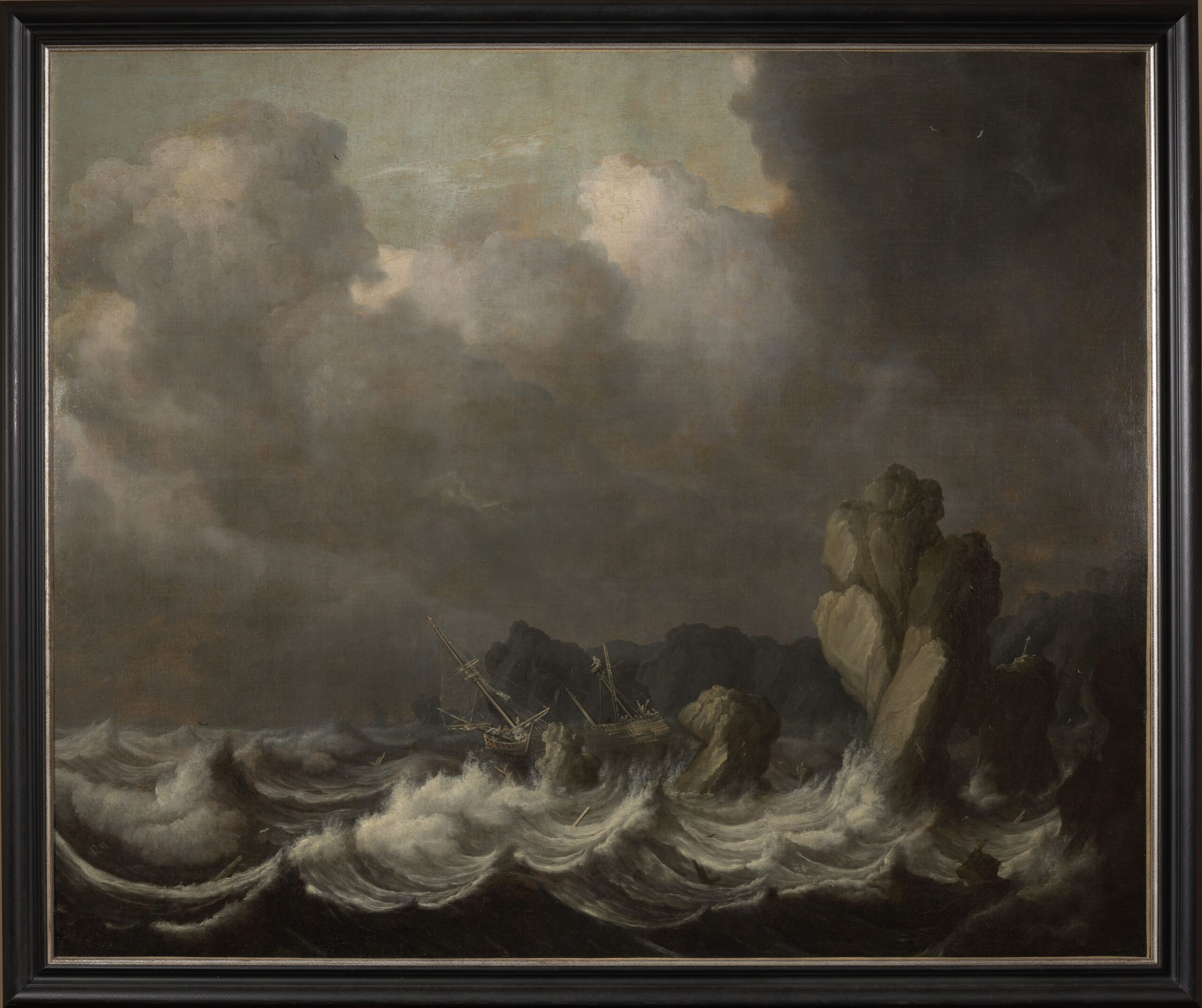 Historically, the Musée Jeanne d’Aboville has been known for its Dutch still lifes, modest in number but alluring in attribution. Certain works, such as Pieter Gerritsz. van Roestraeten’s Still Life with Gold and Silver Objects and the Flowers in a Glass Vase with Fruits and Two Parrots, have been able to demonstrate their pictorial qualities and thus retain their attributions. Thanks to its signature and date of 1691, the latter panel is an indispensable landmark in understanding the work of the painter Johannes Fabritius, who is less well known than his brothers Carel and Barent. While the crepuscular Mors Omnia Vincit by Mathias Withoos has been much written about and is soon to be exhibited at Amersfoort accompanied by a previously unpublished article, the Still Life with Fish (fig. 5), bearing the monogram of Pieter de Putter and distinguished for its play of light and restrained composition, has never been shown outside France. Other attributions have been re-evaluated. Thus the Still Life with Lobster, credited to Jan Davidsz. de Heem, has now been assigned to the circle of the master, while Fruits, Butterflies, and Insects, previously thought to be by Abraham Mignon, has swollen the oeuvre of Mignon’s pupil Ernst Stuven. The Vanitas with Skull and Oil Lamp (fig. 6) entered the collection in 1883 as a work by Rachel Ruysch, and had been purchased as such in 1853. It nevertheless differs in style from the artist’s sottobosco scenes. In the 2015 catalog, Sam Segal proposed an attribution to Coenraet Roepel based on the close resemblance of the diffuse light, the simple framing, and the cool palette to three still lifes signed by Roepel, and dating from 1715, which sold on the British market in 2014. 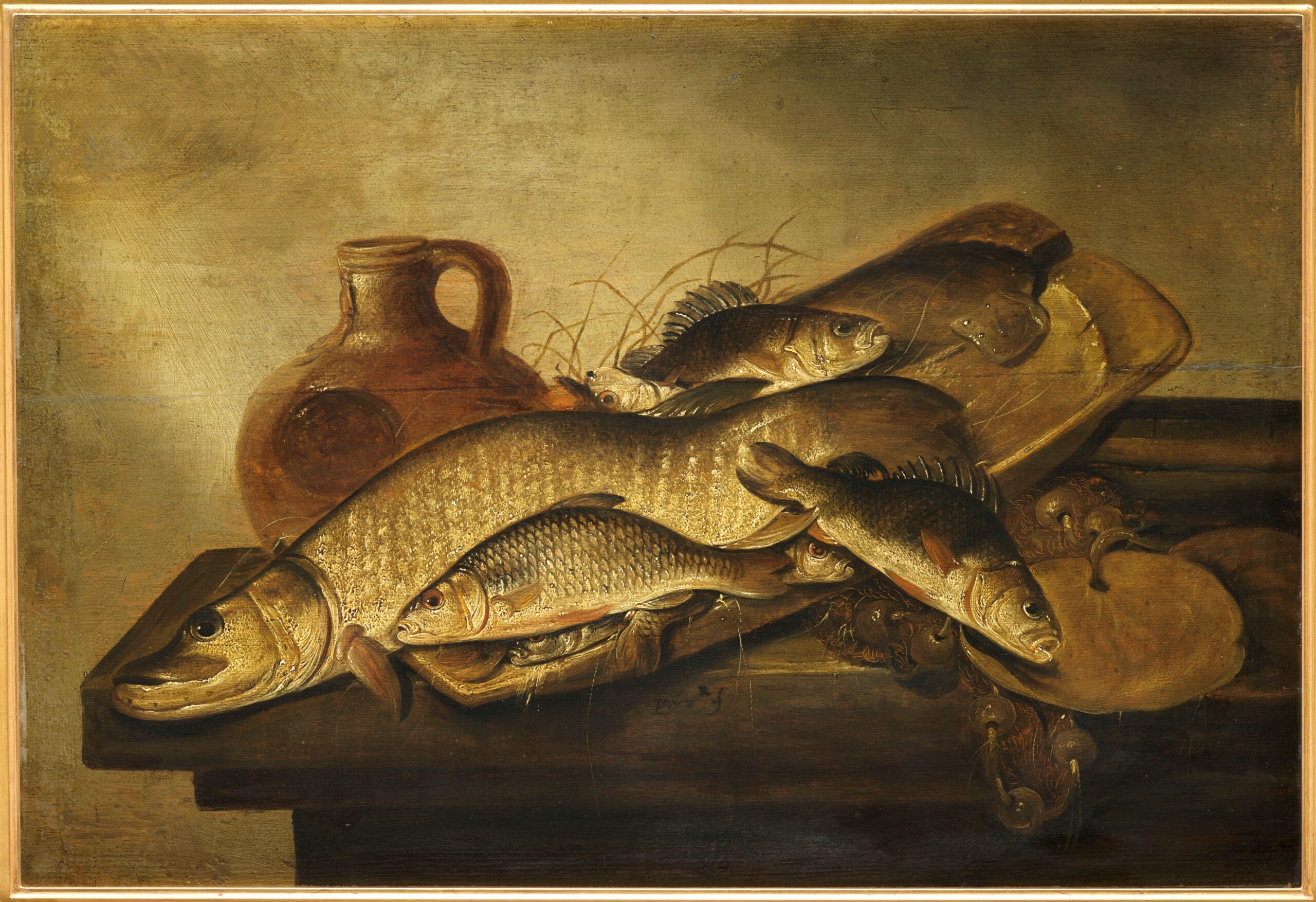 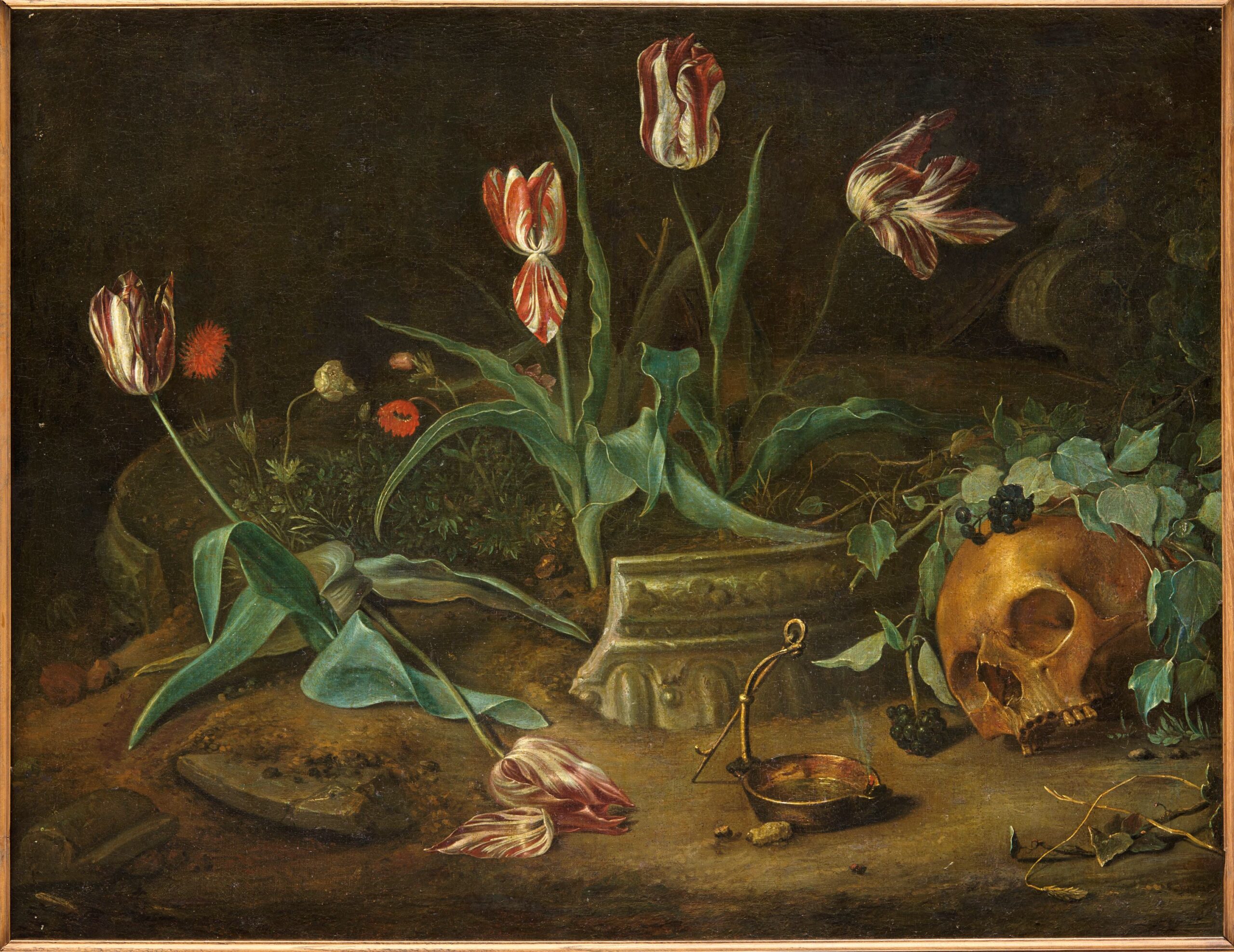 To complete the panorama, Gabrielle d’Héricourt acquired a number of portraits and genre scenes as well as two church interiors. In addition to the Nocturnal View of the Laurenskerk in Rotterdam by Daniel de Blieck, the Musée de La Fère also has on display one of the rare works by Emanuel de Witte conserved in a French collection. Imaginary Church Interior with Monks (fig. 7), signed by the artist, is a very fine example of the architectural pictures De Witte painted for the Catholic market in the 1660s. Also on view are scenes of everyday life such as The Village School. This rustic interior, rapidly sketched and animated by figures evoking tronies, was attributed by Horst Gerson to Frans Hals’s son Harmen. Old Woman Reading in an Interior, with its badly darkened paint layer, has recently been credited to Jacob van Spreeuwen, a follower of Gerard Dou in Leiden. Among the collection’s portraits is that of a well-to-do family (fig. 8) depicted in a distinctly hierarchical manner nevertheless offset by a delicacy of posture and costume revealed during a recent restoration. Previously miscatalogued, this painting has now been reassigned (pending a more accurate attribution) to the Dutch corpus as the work of an anonymous provincial artist of the mid-seventeenth century. 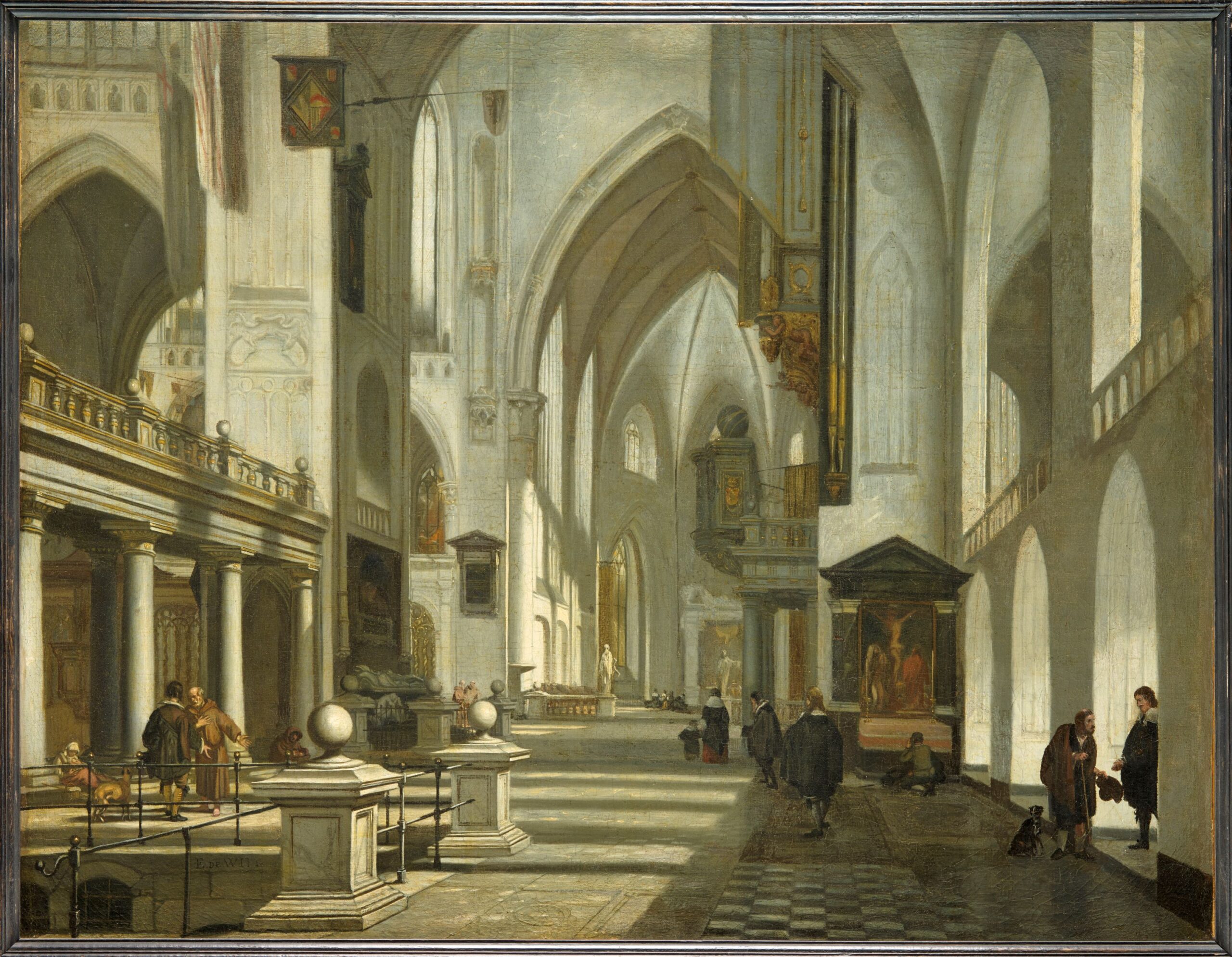 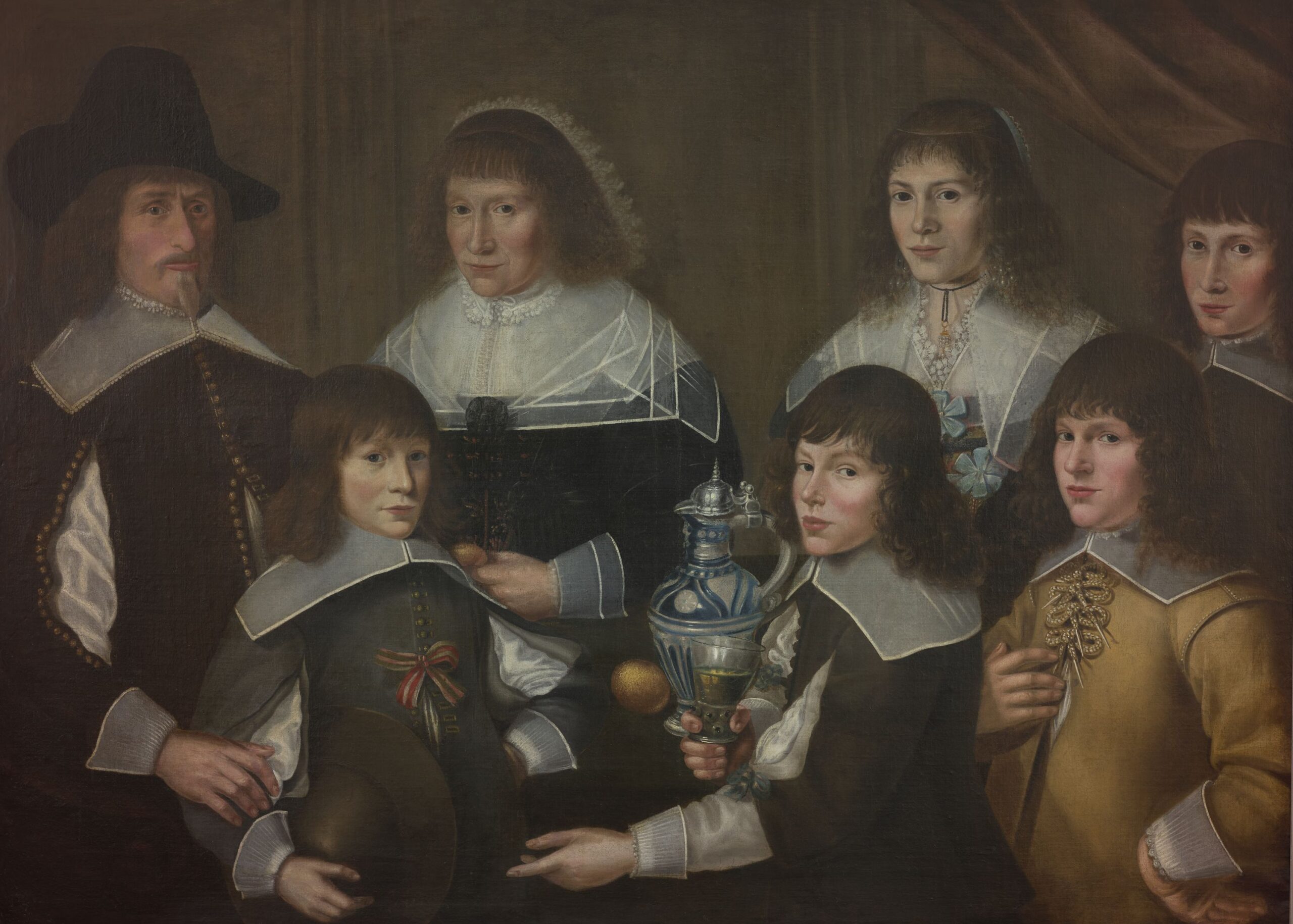 The majority of Dutch paintings in the collection date from the seventeenth century although the museum also conserves two works from the early years of the nineteenth: the Herdsman and his Cattle, attributed to Petrus Gerardus van Os, and the Landscape with Tall Trees, which Sturla Gudlaugsson has linked to plein-air painter Wouter Johannes van Troostwijk’s slender oeuvre of ten or so works.

Although big names may be rare, the Musée Jeanne d’Aboville holds a fine collection of paintings representing a wide variety of genres and styles characteristic of the Dutch school, including a number of masterpieces that almost come as a surprise in the collection of a self-effacing amateur of the nineteenth century. A hundred and fifty years after the museum first opened to the public, the work being carried out by its teams and recently founded association of friends in studying and restoring its rich collections, and in sharing them with the greatest possible number of people, is worthy of acclaim. These efforts are set to continue and broaden to include, in particular, the seventy Flemish paintings dating from between the fifteenth and nineteenth centuries that still await scientific study.