Rembrandt in Amsterdam: Creativity and Competition, organized by the National Gallery of Canada in Ottawa and the Städel Museum in Frankfurt-am-Main, is the first exhibition to examine the central decades of Rembrandt’s career in the context of the Amsterdam art market. As guest curator for the National Gallery, I began to develop the concept more than five years ago. In 2016, we welcomed the Städel Museum as organizing partner, with Jochen Sander as co-curator. After delays caused by the Covid-19 pandemic, the exhibition was on view in Ottawa from 16 July to 6 September 2021 and will be in Frankfurt from 6 October 2021 to 30 January 2022. I am beyond grateful for the generosity and hard work of our team and our lenders in these extraordinary circumstances. As is often the case, each museum has created its own distinctive installation. This essay reflects on the presentation in Ottawa.

By the time Rembrandt was in his mid-twenties, he had established a thriving art practice in Leiden, as displayed recently in Young Rembrandt: Rising Star. He could surely have remained there and built a career as one of his hometown’s leading artists. Yet, around 1632, he chose to relocate to Amsterdam, the commercial hub of the nascent Dutch Republic. This bold move and its consequences form the core of our theme. In Amsterdam, Rembrandt expanded the range of his production and the scope of his teaching, building a brand that touched every major subject category. He joined a lively artistic community that included established painters such as Nicolaes Eliasz Pickenoy, fellow newcomers such as Jacob Backer, and a growing cadre of younger talents. We chart his development through the 1650s as the synergy between an ambitious artist and the stimulating environment that challenged and inspired him. A few objects signal the emergence of his late style, a final chapter already brilliantly addressed in Rembrandt: The Late Works in 2014-15. 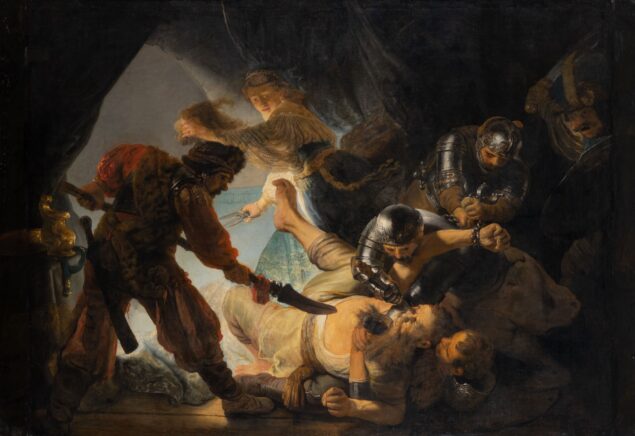 Amsterdam artists offered consumers an exceptional variety of options. To explore this, we chose to bring Rembrandt’s paintings, prints, and drawings into dialogue with stellar works by rivals as well as followers. To use a business analogy, we were committed to examining the “supply side” of the equation: the creative efforts of Rembrandt and others to distinguish themselves in this competitive environment. So far so good, but circumstances would compel us to pay more attention to the “demand side”: the fact that much of the unprecedented wealth fueling this market was connected to global trade. 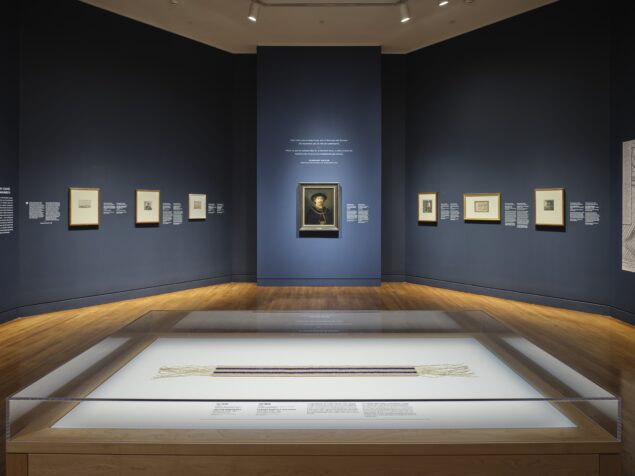 By 2020, as the catalogue was in press and the installation design underway, the world was gripped by the Covid pandemic. In North America, issues of social justice came to the fore with the Black Lives Matter movement in the US and Indigenous activism in Canada. (In May 2021 would come the tragic discovery of mass graves of Indigenous children at Canadian residential schools.) For the Gallery, located on unceded Anashinaabe Algonquin territory, these circumstances prompted a profound rethinking of mission and vision, beginning with the approach to Rembrandt in Amsterdam. (For more, see here) The new Director and CEO, Sasha Suda, and Deputy Director and Chief Curator, Kitty Scott, charged the curatorial team (myself, Erika Dolphin, and Kirsten Appleyard) to consider what it means, in this time and place, to exhibit the work of canonical European artists whose culture was steeped in colonialism. The loan list was fixed, the gallery spaces under construction. What to do? Conversations grew to include contemporary art curator Jonathan Shaughnessy (now Director of Curatorial Initiatives), Greg Hill, Audain Senior Curator of Indigenous Art, and colleagues in Education and Public Programs.

The natural first step was to place the Amsterdam art market within the larger narrative. The Education Department produced a world map tracing Dutch trade routes, including the tragic “middle passage” that bore enslaved African people to the Americas. Object labels called attention to motifs such as bamboo walking sticks and ostrich feathers, as well as the Asian paper on which Rembrandt printed his finest etchings — all evidence of Amsterdam’s central role in the market for imported goods. 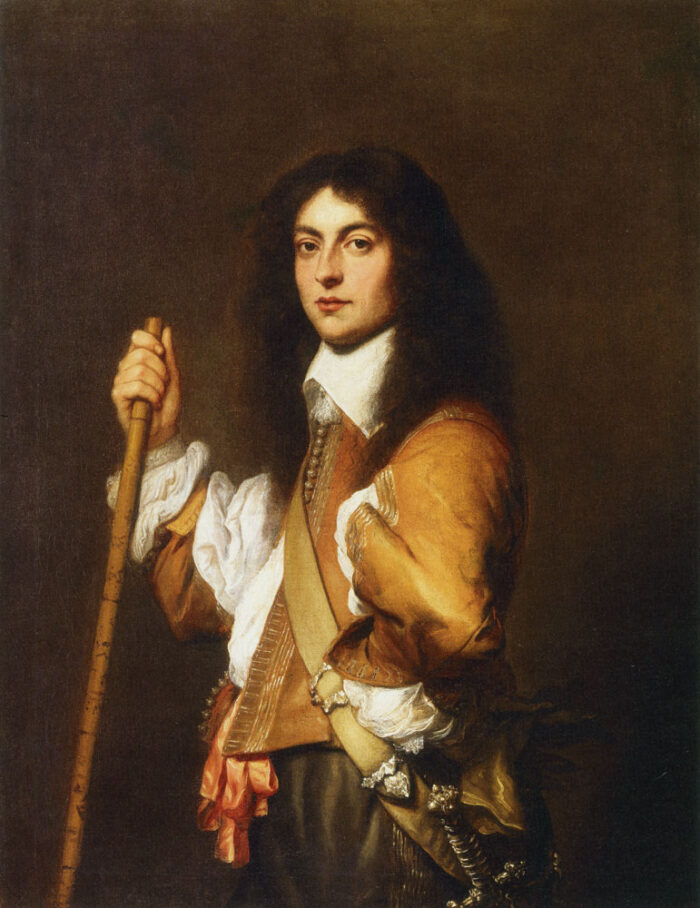 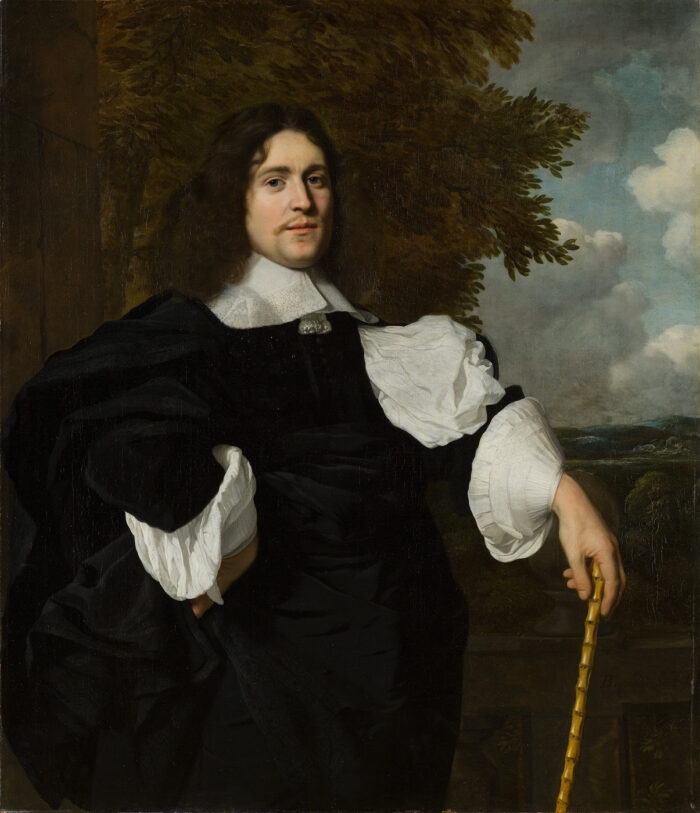 I had chosen two portraits of the brothers Adriaen and Jacob Trip, by Jan Lievens and Bartholomeus van der Helst (Fig. 3, 4) because they are engaging examples of commissions from patrons who could easily have afforded portraits by Rembrandt (as their elders did) yet chose his competitors instead. As it turned out, they provided a chance to personalize the story of global trade: as many readers will know, the Trip family’s business enterprises extended from Scandinavia to Africa to Southeast Asia, even including the North American fur trade. Other patrons’ VOC connections were also noted.

More important, we brought a plurality of voices into texts and public programming to balance our established narrative with Black and Indigenous perspectives. Joana Joachim, a Black feminist art historian who will soon join the faculty of Concordia University, wrote wall panels addressing topics such as slavery, the suppression of Black cultural production, and the presence of Black people in the Dutch Republic. Recent initiatives at Dutch museums provided much inspiration, from the Amsterdam Museum’s rejection of the term “Golden Age” to the exhibitions Here: Black in Rembrandt’s Time (Rembrandthuis, 2019-20) and Slavery: Ten True Stories (Rijksmuseum, 2021), and related programs broadcast internationally.

In Turtle Island (as Canada was known to its original inhabitants), it was equally important to address Indigenous history. Gerald McMaster, Director of the Wapatah Centre for Indigenous Knowledge at Ontario College of Art and Design University in Toronto, and Rick Hill, Tuscarora artist, writer, and curator, contributed texts and recorded a conversation reflecting on Indigenous interactions with Dutch settlers. They address themes such as land use, gender norms, religion, and the trade in commodities such as cochineal dye and beaver pelts. A tangible historical link is the Two-Row Wampum created in 1613 to honor a treaty between Dutch settlers and the Haudenosaunee people, whose territory encompassed parts of today’s New York and Ontario. While extant historical examples could not be shown, we presented a modern replica (Fig. 2). 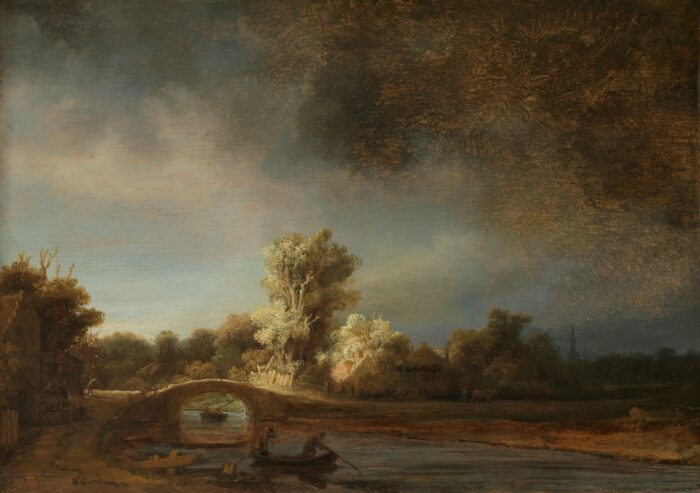 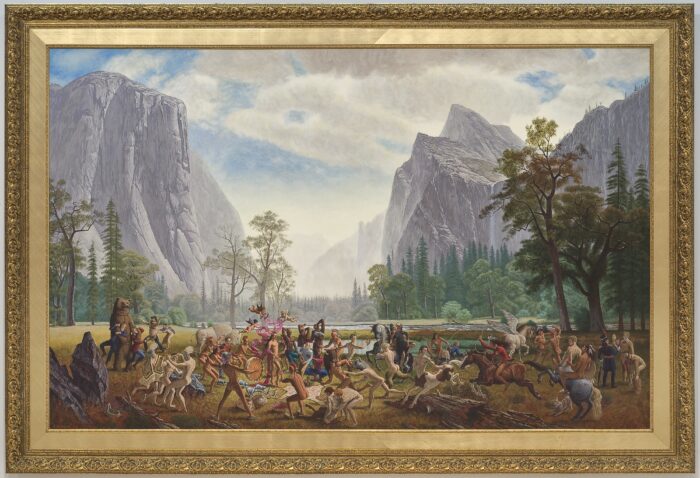 The National Gallery’s collection yielded several works by contemporary Black and Indigenous artists that address the legacy of European colonialism. Installations by two contemporary Indigenous artists, Skawennati and Greg Staats, are inspired by the Two-Row Wampum and its message of peaceful coexistence. Congolese-Canadian artist Moridja Kitenge Banza confronts the commodification of Black bodies. Perhaps best known is Kent Monkman, of Cree heritage, whose monumental history paintings hang in the Metropolitan Museum of Art and elsewhere. We placed his painting The Triumph of Mischief opposite Rembrandt’s Landscape with a Stone Bridge in a room devoted to landscapes (Fig. 5, 6). Monkman, a self-described ‘art history geek’, frequently samples motifs from European historical art. Here, he sets a gathering of Indigenous and settler figures, reminiscent of a kermis by Bruegel or Rubens, in a Rocky Mountain landscape. In the mid-seventeenth century, picturesque landscapes became the most popular subject on the Amsterdam art market. Monkman’s work reminds us that ownership of land — and of artistic tradition — remains a contested issue. 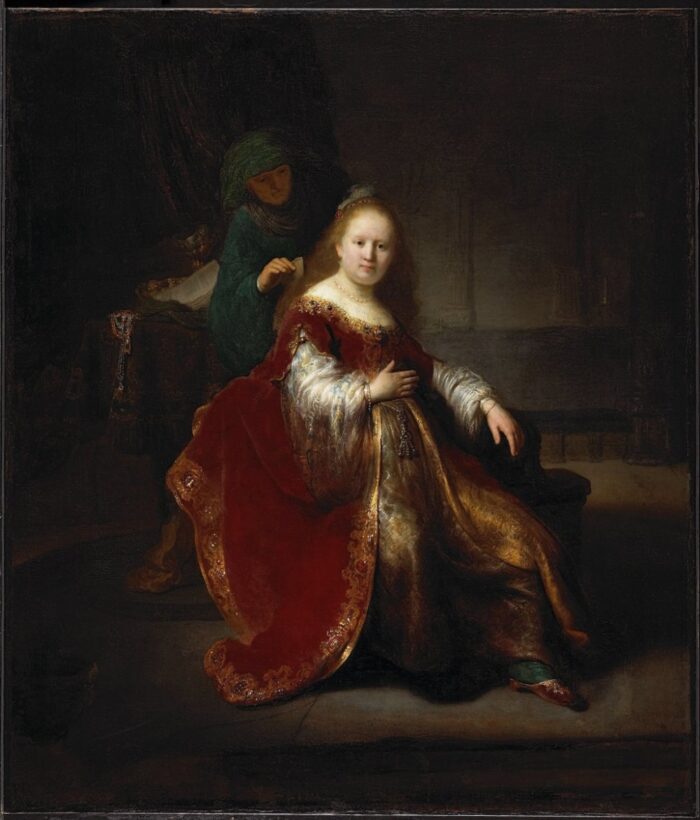 In a section called ‘Beyond Beauty’, the National Gallery’s Old Testament Heroine (Fig. 7) joined Portrait of Hendrickje Stoffels (National Gallery, London), Sarah awaiting Tobias (National Gallery, Edinburgh) and other key works in which Rembrandt endows his female figures with complex interiority. Hendrickje died in 1663, most likely from the Great Plague that spread from Amsterdam to London. Two panels by Plains Cree artist Ruth Cuthand were placed nearby. Adopting the traditional Indigenous medium of beadwork, Cuthand depicts the microbes that produce smallpox and pneumonia. These diseases, introduced to North America by European settlers, decimated the Indigenous population. These are poignant connections in Covid times.

This essay reflects on a process by which we aligned our installation in Ottawa with current concerns while remaining true to our core theme. As a specialist in Dutch art, I found the collaboration refreshing and thought-provoking. I am convinced of the need to appeal to viewers with broad interests and diverse backgrounds. For some, the incorporation of contemporary art may seem difficult to reconcile at first, but it invites viewers to recognize that the art and events of Rembrandt’s lifetime remain meaningful and relevant, even urgently so, in ours.

Stephanie Dickey is Bader Chair in Northern Baroque Art at Queen’s University in Kingston, Canada. She was guest curator for this exhibition at the National Gallery of Canada in Ottawa. She has been an associate member of CODART since 2009.